The Game Itself
3.5 Stars
The Video: Sizing Up the Picture
4 Stars
The Audio: Rating the Sound
3 Stars
Replay Factor
2 Stars
Bottom Line
Worth a Look

Poland based Techland has become more prominat over the last few years, most notably when they released their zombie apocalyptic game, 'Dead Island.' Released in November of 2010, the first person co-op adventure was focused primarily on melee combat and quickly earned a devout cult following – regardless of the many technical issues that plagued the game. Since then they've continued to hone their development skills, while further embracing the all-too-familiar zombie theme, with 'Dead Island: Riptide' and the newly announced 'Dead Island 2.' Adding to their ambitious schedule is the new horror-fantasy IP, 'Hellraid.' Although not scheduled to release until sometime in 2015, they've enlisted their subsidiary developer, Shortbreak Studios, to bridge that gap with the iOS title, 'Hellraid: The Escape.' But will this handheld mobile game be enough to satiate Techland's fan base until 'Hellraid' releases?

The start of 'Hellraid: The Escape' couldn't be any more macbre. Sealed within a darkened stone casket, you force you way to freedom by sliding the cover up and away, gaining your freedom – but at what cost? Like an animal trapped in a cage, you have simply replaced one tomb for another. A quick scan of the room reveals a dungeon-like environment, decorated with the bones of former captives, the squeaking of hungry rats, and the pages of a man clearly gone mad.

Welcome to 'Hellraid: The Escape'. Enjoy your stay. You're already dead! 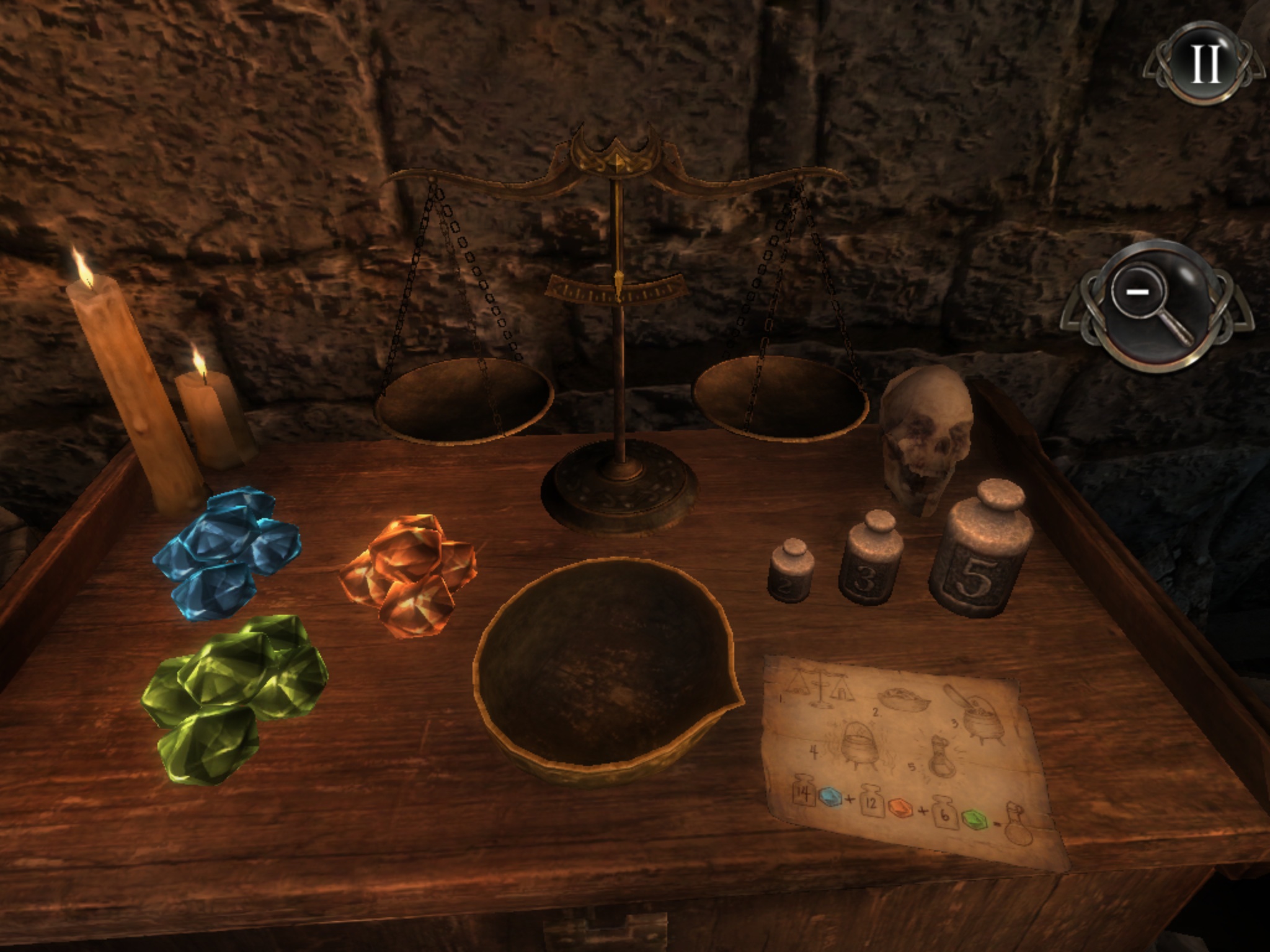 Imprisoned by Crell – a sorcerer obsessed with the dark arts – it is up to you to maneuver through the dungeon to stop him before his power grows in strength. Along your journey you face a variety of puzzles designed to specifically take advantage of an iOS interface. Utilizing the standard touch, tap and swipe functionality (among others) your task is to solve these puzzles and fight the dungeon's monsters with your wits rather weapons.

In addition to the more common touch interface we've all become familiar with, 'Hellraid: The Escape' also employs a virtual analogue stick. Looking is accomplished with a simple swipe in the appropriate direction. While I generally frown on the inclusion of virtual joysticks in games designed for the iPad, the slower-paced gameplay of 'Hellraid' makes using this control scheme much more fluid and easier to manage.

'Hellraid: The Escape' does a noble job of trying to make each room's puzzle unique from the last, while slowly ramping up the difficulty. Early levels can be completed in as little as a few minutes, while later levels demand a bit more thinking and strategy to complete. Traps are sprung and the character that you play as – the body that you control – will realize a quick and brutal death. Consequently, this death results in one of the more interesting aspects of 'Hellraid' – the reanimation of another host body.

With each death you are transported back to the beginning of the level, forcing your way out of yet another stone enclosure. Thankfully, most of your progress is saved and each of the dozen or so chapters are short enough that backtracking is never an issue. However, walking past the remains of the body you previously controlled, witnessing the repercussions of your mistakes first hand, is lesson enough to think things through and consider your strategy more thoroughly. 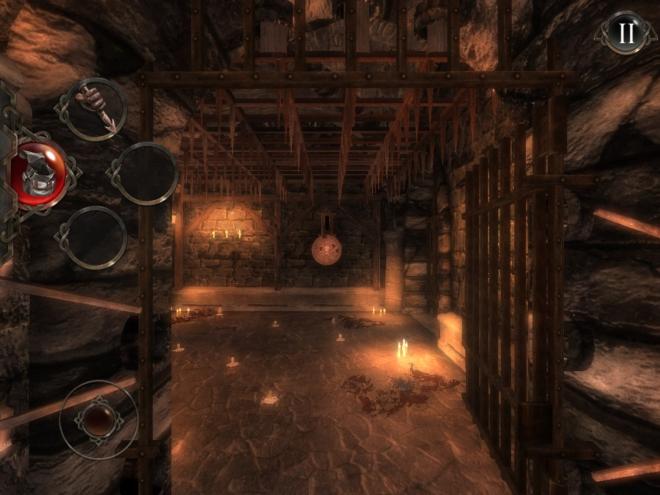 Although 'Hellraid' makes an attempt at delivering an interesting story, the strong visuals of the game are what really shine from start to finish. The developers at Shortbreak Studios have a strong grasp of what the underworld could look like and present an environment that is both frightening (in a Hammer films sorta way) and immersive: skeletons litter each room, candles and the arcane arts adorn altars, and spiders and rats skitter across the floor.

Unfortunately, the majority of the creatures that inhabit this dungeon fall a bit flat and emote in a rather clunky fashion. But it's easy to look past these fairly minor issues when seeing the more vivid details emerge from the strong use of lighting and shadows. 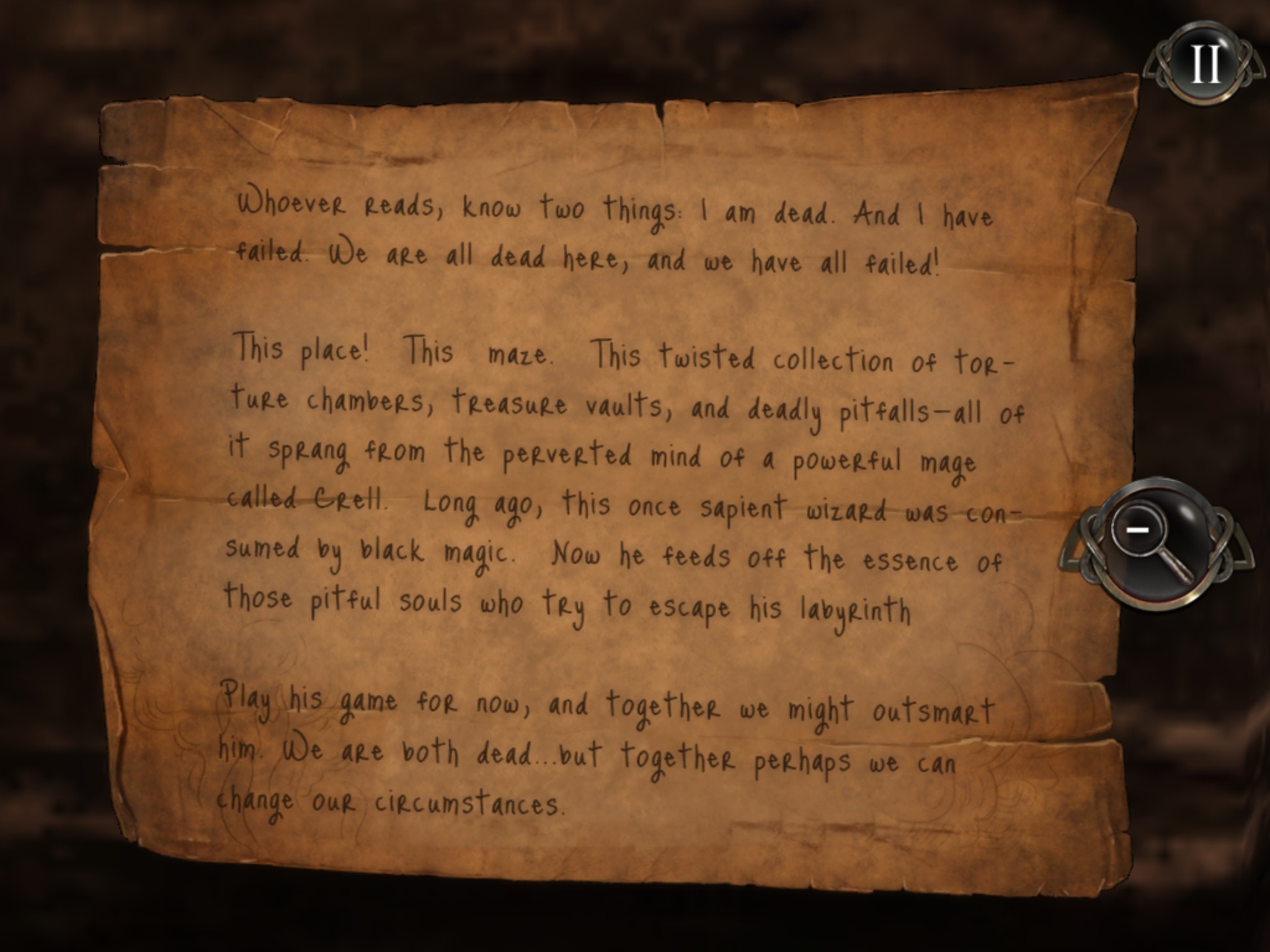 While there is support for TV display via HDMI and Apple Airplay, playing 'Hellraid: The Escape' with an iPad that utilizes the Retina display is the best way to go. I noticed a diminishment in visual fidelity when playing on the TV, and simply could not imagine playing 'Hellraid' on the iPhone's substantially smaller screen. 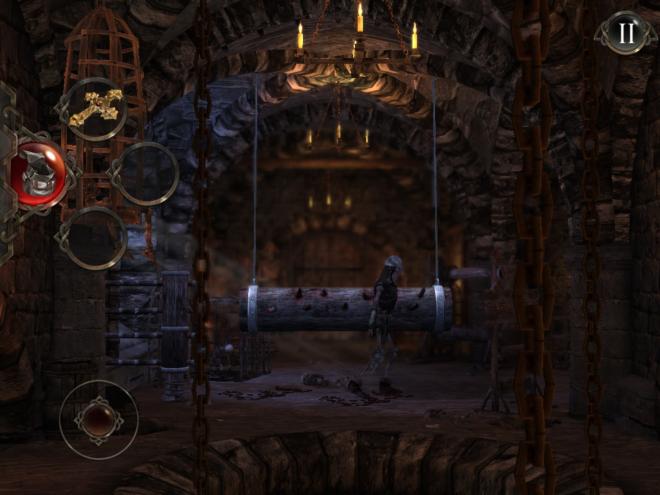 Because the story of 'Hellraid: The Escape' relies mostly on journal entries and found pages, there is little to no voice acting involved. As a result, the majority of the game's audio relies on ambient sound and creature effects to help drive the story set in a dungeon's torture chambers.

Overall the sound design is nicely presented. My Sennheiser over-the-ear headphones helped to capture the little nuances the games audio has to offer. In addition to the creepy directional sound effects, the musical score was immediately reminiscent of the work Ennio Morricone did with John Carpenter's 'The Thing'. The haunting melodies and high-pitched string ensemble delivered a more than appropriate mood throughout the game. 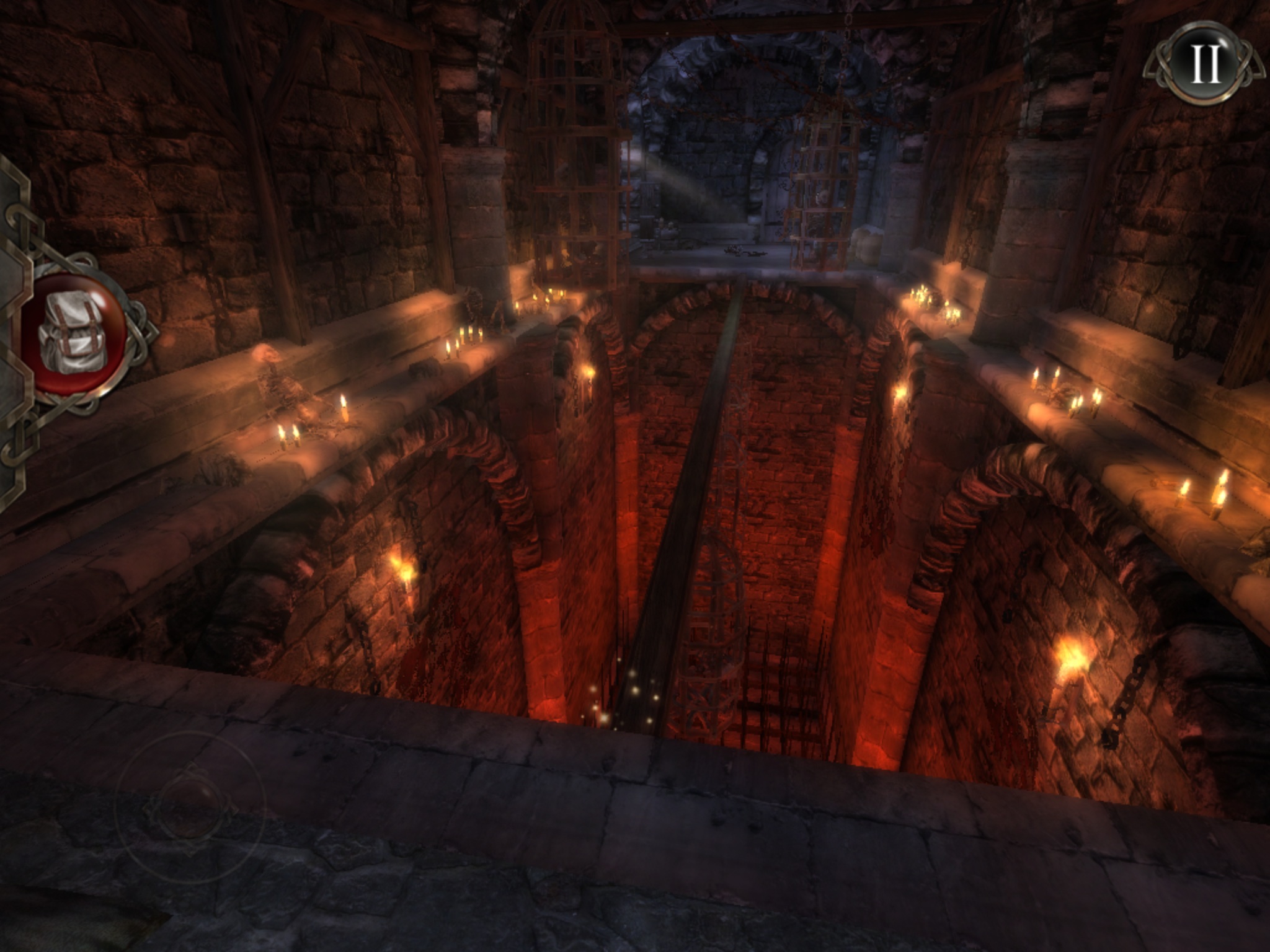 The conclusion of 'Hellraid: The Escape' will come much sooner than you might expect. Although there are a dozen levels to the game, working your way through the various puzzles takes very little time to complete. And once you've figured out each puzzle, playing through them a second time will be that much easier and quicker. The inclusion of locating a pre-determined amount of hidden gems may have you scouring every nook and crevice, and the idea of speed running each level may initially be enticing, but in the end 'Hellraid: The Escape' offers very little in the way of replayability. With that said, it's clear that the developers at Short Break Studios have ongoing plans for this iOS game as future downloadable levels are clearly identified as 'coming soon'. 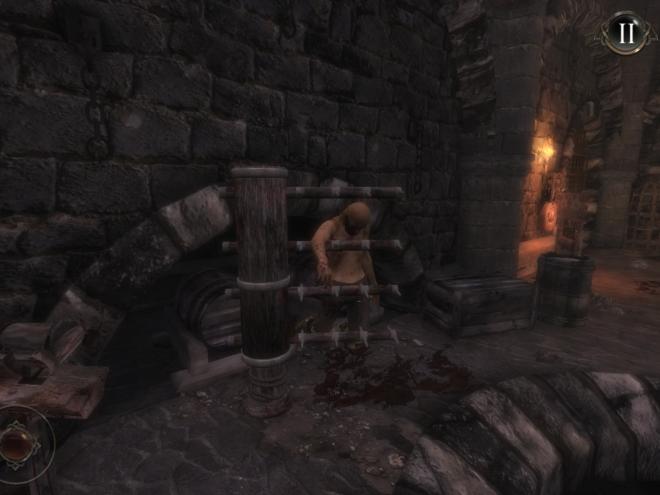 I proudly count myself among the devout followers of Techland's 'Dead Island' series. I am also more than a little excited about both the 'Dying Light' and 'Hellraid' releases scheduled for 2015. While I'm certain 'Hellraid: The Escape' was meant to introduce the gaming masses to this new world, it ultimately does very little to help ease that waiting period. By no means is it a bad game. In fact, everything about it works rather well. And for $2.99 it's hard to argue the price point, even after realizing how short the game truly is. Playing 'Hellraid: The Escape' was a distraction that was enjoyed just long enough to complete the game. Depending on what the future content has to offer, it might even be worth traveling back to the dungeon for another visit.