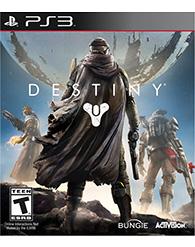 Players are cast as Guardians of the last city on Earth, who will traverse the ancient ruins of our solar system from the red dunes of Mars to the lush jungles of Venus. Able to wield incredible power, gamers must battle humanity's enemies and reclaim all that was lost during the collapse of mankind's Golden Age. In a story-driven universe, Destiny's saga unfolds through grand talesand epic adventures by immersing players in a bold new universe filled with cooperative, competitive, public, and social activities, all seamlessly connected.