The Game Itself
4 Stars
The Video: Sizing Up the Picture
3 Stars
The Audio: Rating the Sound
4.5 Stars
Replay Factor
3.5 Stars
Bottom Line
Recommended

'Assassin’s Creed: Rogue' checks off a few boxes for Ubisoft: giving players a last-gen option this year, closing up the North American saga of 'Assassin’s Creed', and allowing players to experience a Templar game. For anyone new to the series, the titular Assassins claim to be the saviors of human freedom in an ancient struggle against the Knights Templar. Like the Assassins, the Templars were a very public edifice during the Crusades, but unlike the Assassins, became a powerful Illuminati organization that desires world domination. Until now, players have only taken control of Templars briefly. The lead character of 'Rogue' is Shay Cormac, a former Assassin who takes up arms against his brothers and joins the Templars. 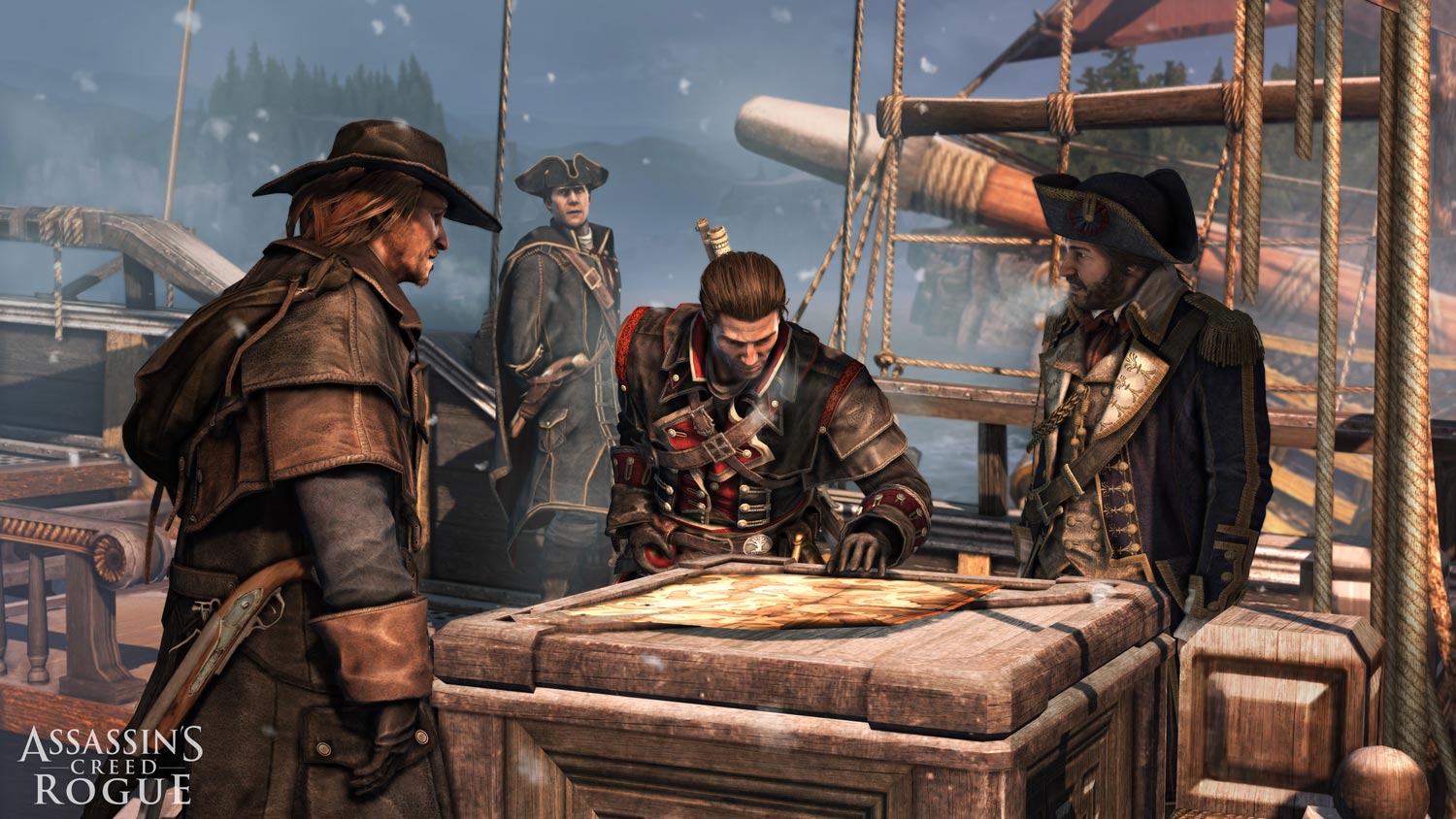 'Rogue' plays much like both 'Assassin’s Creed III' and the last-gen version of 'Black Flag'. Shay could be an Irish-voiced palette swap of Ratonhnhaké:ton or Edward Kenway for all intents and purpose. He runs, climbs, and hides as expected, although he does have access to a few new weapons and gadgets. This includes an air rifle that serves as an updated blowgun. It can load different types of ammunition, even a firecracker round to distract enemies. There is also a grenade launcher that replaces the thrown grenades of previous games. In hand-to-hand combat Shay uses a single sword paired with a main gauche, which can be upgraded. Because some of his enemies are Assassins, Shay has a gas mask to protect against poisonous fumes. 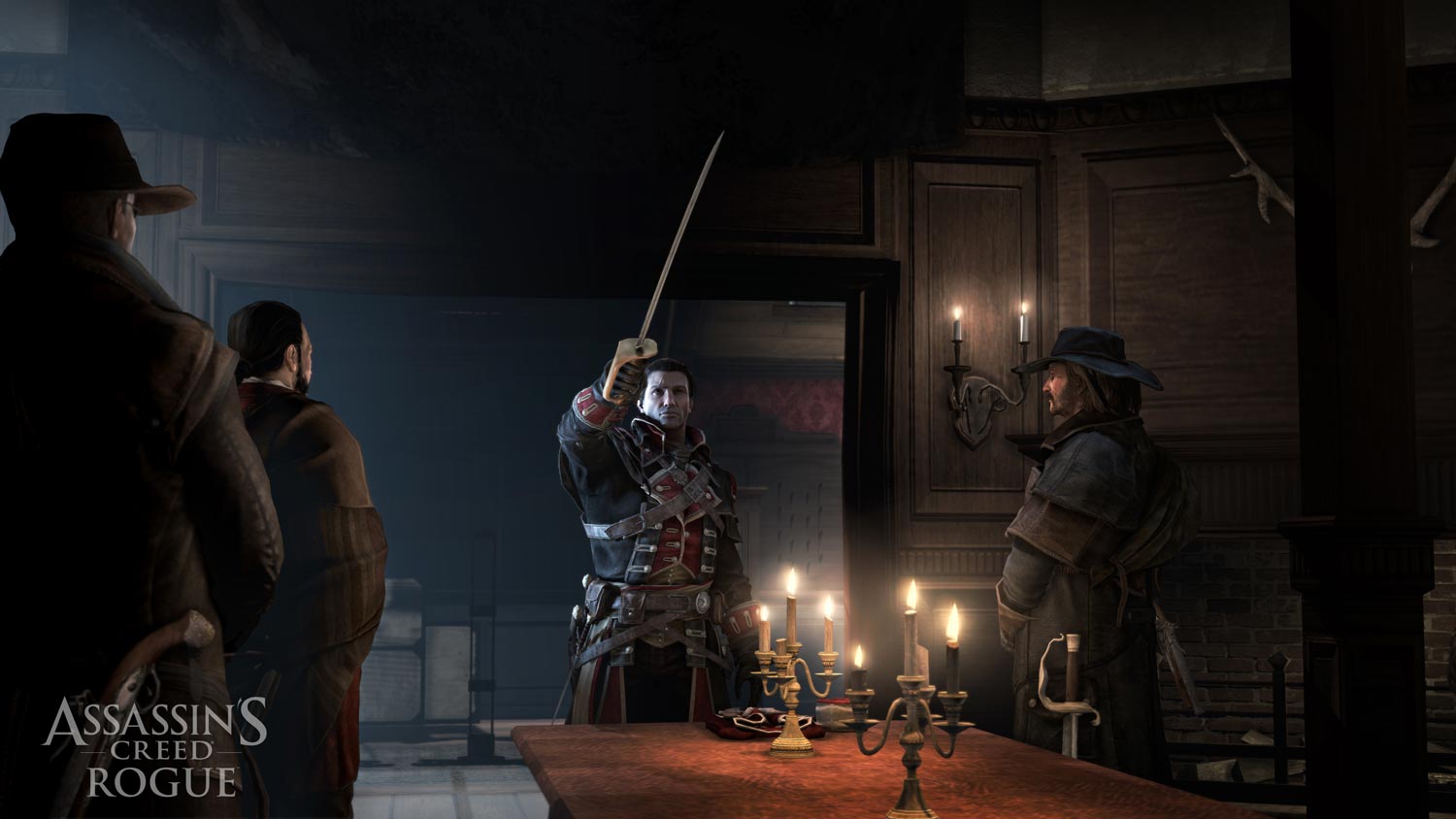 I felt guilty even before playing 'Rogue', knowing from the promotional material that Shay would eventually betray the Brotherhood and become not just a Templar, but a Templar whose sole duty is to murder Assassins. However, the story that unfolds around Shay made me understand his decisions, even sympathize with some of them. It is probably the best narrative of an 'Assassin’s Creed' since 'Assassin’s Creed II', which is very refreshing because the story quality of the series has declined in the last few years. It also answers some of the questions left over from previous games, such as what happened to Adéwalé. The gameplay opportunities it offers are different - instead of a string of identical guards to plow through, Shay’s Assassin enemies use many of the tricks that I’ve been learning through the years. Hunting them - and being hunted by them - plays out similarly to the cat-and-mouse multiplayer from previous games. They can attack from cover and from crowds, and use different hiding tactics to avoid brawls. The first time I was attacked with an air assassination made me smile. While the main story is slightly shorter than is typical for an 'Assassin’s Creed', the modern-day segments have been reduced, allowing for more time in the historical segments. 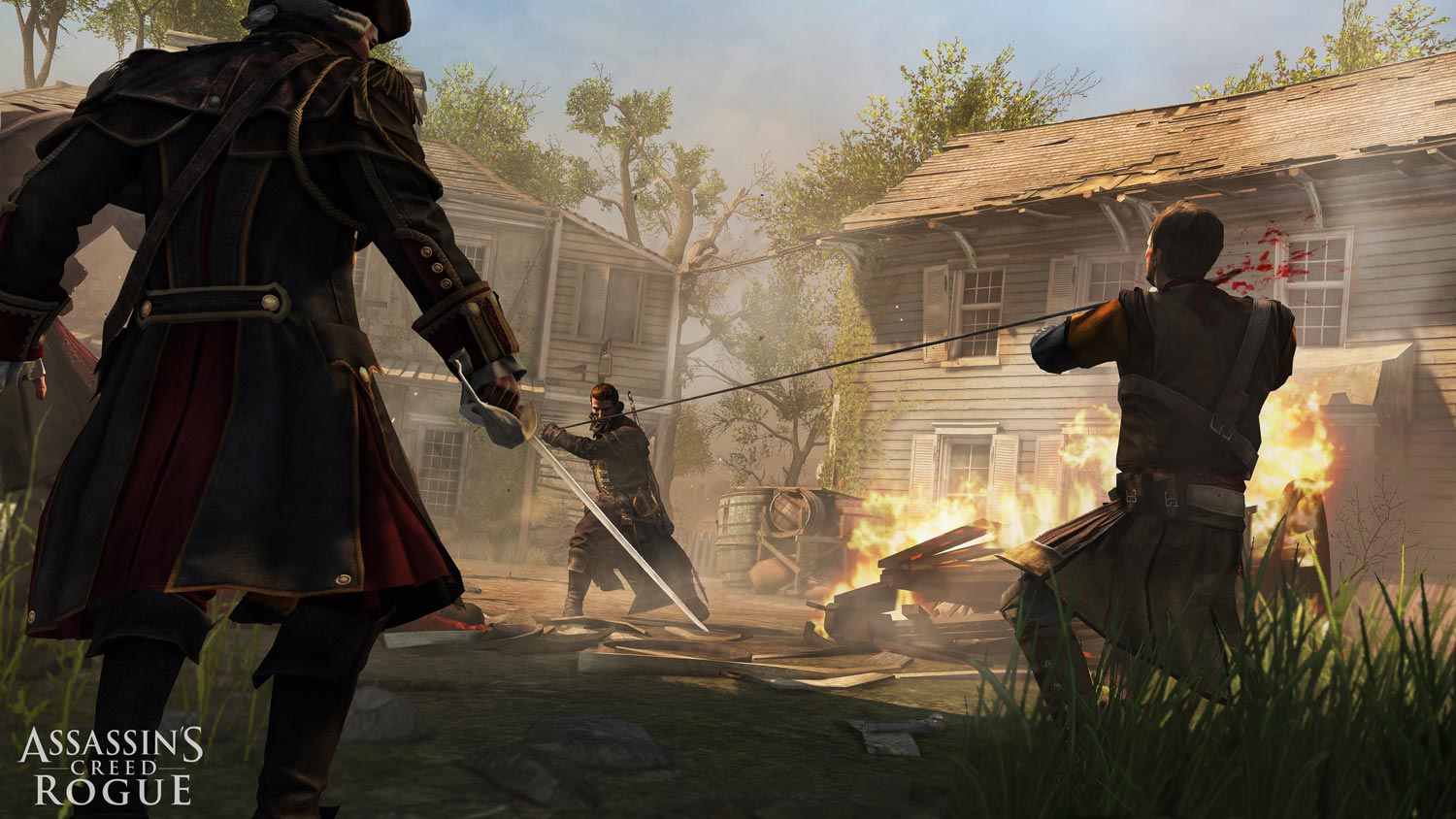 'Rogue' uses the same engine as previous games, and exhibits similar bugs. They are mostly cosmetic and not game-breaking. The most serious one is Shay's irritating tendency to climb up the wrong surface when freerunning. This also extends to jumping in the wrong direction from heights, which is particularly concerning when the wrong direction is fatal or when I’m trying to collect one of the sea shanties that have somehow made it over from 'Black Flag', mocking me while I futilely climb all over North America to collect them. 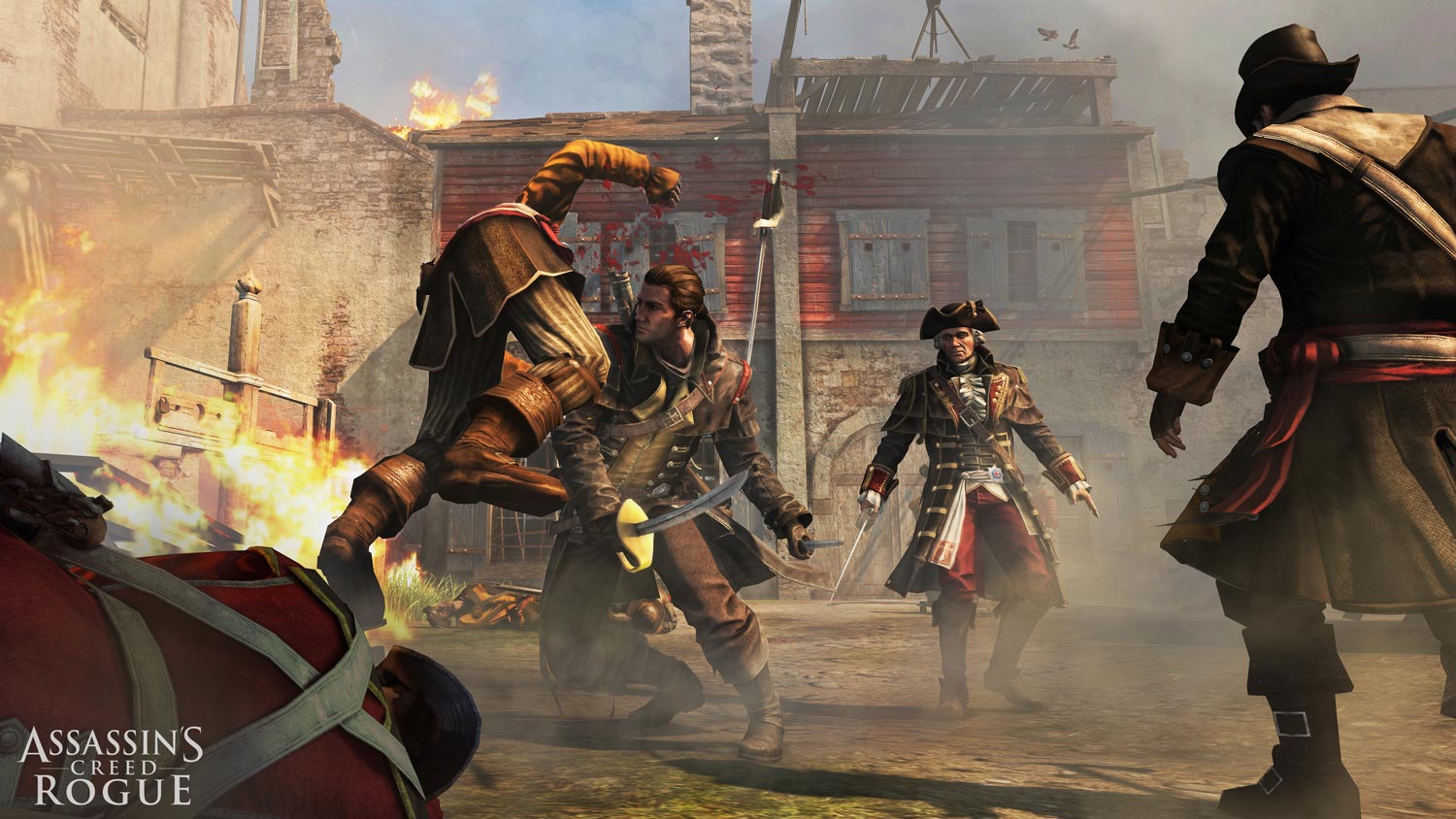 Naval warfare has returned and is as fun as ever. Most of the waters that Shay’s ship, the Morrigan, traverses are chilly, too chilly to be swam in for any length of time. This means that there are none of the beautiful shipwreck scenes of 'Black Flag', but there are some new features on the surface. Small icebergs can be rammed or shot with cannon to generate large waves that damage enemy ships in the area. The Morrigan is fitted with a special icebreaker prow that lets her move through ice sheets, useful when pursuing enemies. The swivel gun has been replaced with the Puckle gun, a huge revolver that fires very quickly (for the 18th century). The ship can also spew a line of fire behind her on the water to harass pursuers. And, to my surprise, Shay’s ship can be boarded by the enemy. I was on the tail of a ship in the early game when a separate ship rammed the Morrigan and its marines jumped over to engage my crew. 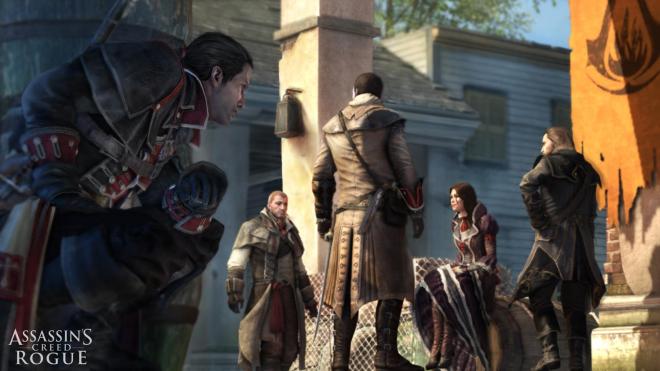 I can't see much difference in graphical quality in the AnvilNEXT engine since it was inaugurated with 'Assassin’s Creed III' in 2012. The visuals are certainly not bad, just unchanged. Faces, textures, and backgrounds are decent enough, although the lighting is where the engine suffers. Shadows are fuzzy and obfuscated, especially on backgrounds with high contrast, like skin. The art design and environments are pretty, with a focus on snow, ice, and other arctic features. 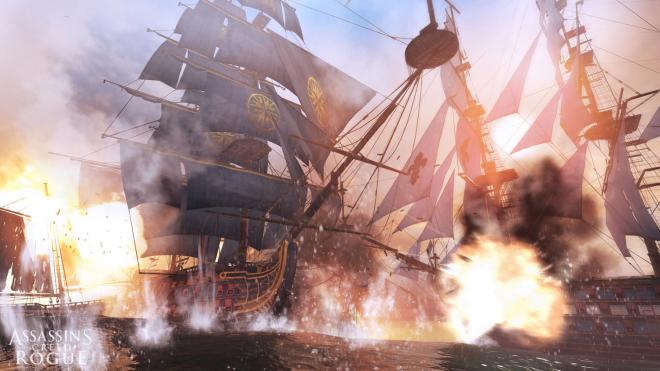 The soundtrack has a strong colonial flavor and heavily features string and woodwind instruments. New sea shanties have been added for more musical diversity on the high seas, and the musicians found in taverns are very entertaining, often incorporating satire into their songs. The voice acting is superb and most of the actors for previous installments have returned, such as those of Achilles, Haytham, and Adéwalé. There are some issues with sound effects syncing up, especially during kill animations.

The open world of 1750s North America has several new collectibles to be found, like cave paintings and "prosperity" gems that increase money accumulation. Otherwise, the optional activities have remained mostly unchanged, or have been adapted from earlier titles in the series. None of them are as enjoyable as the side missions in 'Black Flag' or 'Freedom Cry', but are a serviceable diversion, especially the interceptions that had me protecting a target from a squad of Assassins. There is no compelling reason to play through the storyline again, and at the time of publishing, no form of multiplayer. 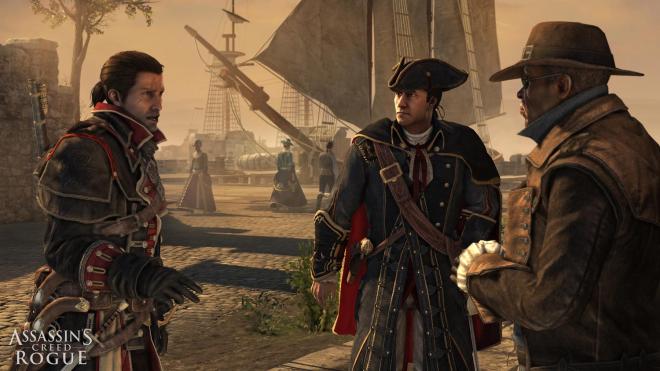 'Assassin's Creed: Rogue' is an adequate, if familiar, conclusion of the latest chapter of 'Assassin’s Creed'. It adds enough to qualify as a full-fledged release and features a decent storyline. The bugs are tolerable and certainly not as distracting as its big brother 'Unity'. Gameplay wise it's perfect for anyone enthralled by the seafaring focus of 'Black Flag.' For anyone who hasn’t tossed out their last-gen consoles quite yet, it’s among the best 'Assassin’s Creeds' to be found in that generation.