PS4 version reviewed. As a cross buy title, one purchase (or free with PS Plus) nets both versions.

From FuturLab comes the sequel to the well-received and lightning fast space shooter 'Velocity Ultra,' 'Velocity 2X,' which hits the PS4 and PS Vita as a PS Plus free title in the first month of its release. FutureLab has promised a game that's more than just a shoot 'em up. Whether on foot or in control of the Quarp Jet, 'Velocity 2X' hopes to provide an addictive level of action, but will mixing genres make for PlayStation success?

The time trial is almost always used as a way to prolong a game's replayability at the closure of that game's primary gameplay stretch. Leaderboards and time trials are traditionally relegated to the backend of a package, a bullet point for the marketing team to write in the description. Now that you know exactly where I'm going with this line of thought, here it is: 'Velocity 2X,' like its predecessor, eschews the common role of the time trial by creating its entire identity around speed, around velocity. The whole game, all of its 50 pragmatically and efficiently designed levels, revolves around pushing your character to the goal as fast as humanly possible. The difficulty lies not in the completion of a stage, but in the swift completion of that stage. It's a speed-runner's dream, an anxious game-long time trial, and it sucks you in. 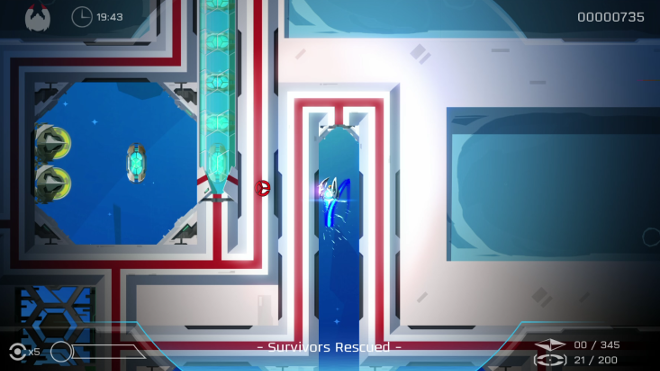 You're the pilot of a Quarp Jet, capable of small bursts of teleportation and infinite bursts of immense speed. That was how the original 'Velocity Ultra' worked too, but this time around you're also jumping out of the ship at specific points mid-level and running through side-scrolling sections too, effectively doubling the progressive layering of mechanics and maneuvers that aid you as the levels grow more complex and more challenging, as the best of games often do. Impressively, that identity of speed is not lost in the frequent transitions from ship to on-foot insanity. Like the ship, the pilot too can burst forward at any time, sacrificing more nuanced movement and radial control of her blaster in the quest for shaved seconds.

So, as the player's eyes are entirely occupied by a level, peeled and fixed to the screen in search of the next objective, the next thing to blow up, the next wall to teleport through and the next stretch of open space and opportunity for maximum speed, there is a trance of adrenaline and fixation that is inescapable. Even as the complexity ramps up, so long as the need for speed infects the brain and the fingertips the gam'es goals and levels will be consuming and satisfying. 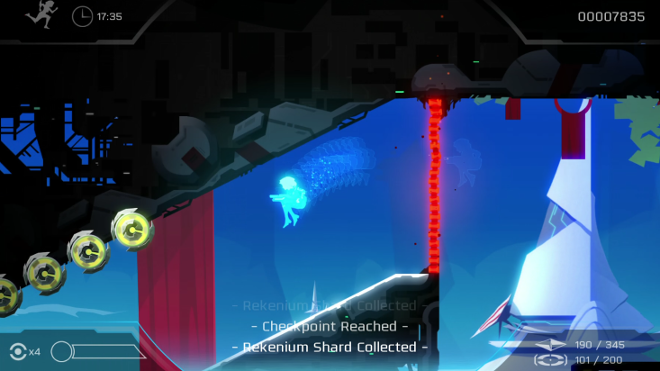 But a small problem does present itself: motivation can waver player to player, and for those that enjoy the time-trial per se, 'Velocity 2X' may struggle to hold the player's attention in its gravity. From a macro design standpoint, there just isn't much in the game. Aside from an XP level-requirement that crops up in the later game and forces the player to perfect some runs through previous levels before moving on, there isn't much to compel the skill required to truly master the levels and command over the avatar's velocity. I even felt a little manipulated as I approached level 40 that I had to go back, for the first time, and gain a little more XP to unlock level 41. Had the game emphasized those requirements earlier on and ingrained that pace of level-unlock throughout, further forcing me to tailor my skills towards the perfection, rather than completion, of the levels, then I think I'd have been more satisfied in the overall loop.

And about identity, 'Velocity 2X's' being so straightforward and so fundamental, there's actually a drop-off in memorability compared to, say, 'Super Meat Boy.' The story finds little reason to be compelling. There's virtually zero weightiness, traction or friction to the way either the ship or the pilot interact with the world and enemies, and though that serves the level design very well, it makes for a very unconvincing sense of place and purpose. It purports only to be a video game, as you float speedily through these levels, and not really much of an interactive world. 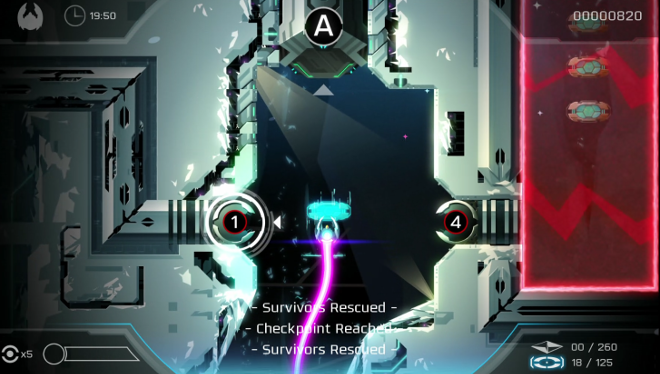 As it stands, the game will suit some players much more than others. The gameplay just requires the kind of gamer that motivates his or herself to perfection and that appreciates a game in the strictest sense of its mechanics and successful level design around those mechanics. For that gamer, this is likely a game approaching perfection. 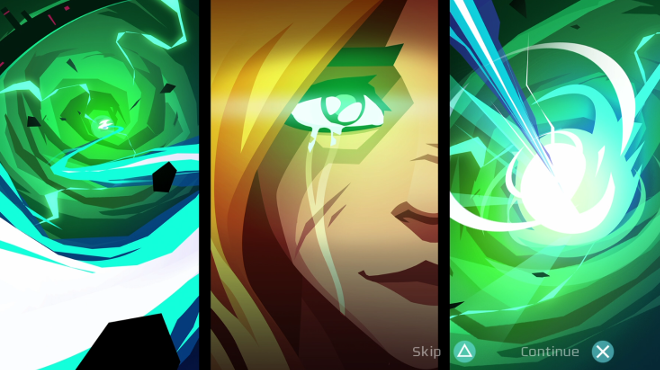 Like the game design, the visuals here are pragmatic to the point of forgettable, while effective as a means of level creation. Though a persistent, futuristic sharpness (you know, how people in the 1950's imagined the cars of today) does make for a unified style, and in theory, grants the game a bit of an edge, despite a lack of variety. Still, the walls are mostly just walls that needed to be walls.

What minor animation work exists, exists mostly to the advantage of obtaining simplicity and directness. Cutscenes are presented in single-panel stills, which are drawn out in the same sharp-edged, colorfully vibrant way as the levels. You get the feeling that, with more substantial and dare I say, edgier writing, this could end up a really great comic strip in (of) the future. Luckily it's a game that never needed ambition beyond being extremely playable.

The one exception to all of this is the lighting that accompanying the various weaponry and the ensuing explosions of their projection. It's a wonderful little fireworks show running at 60 fps on both the PS Vita and PS4. 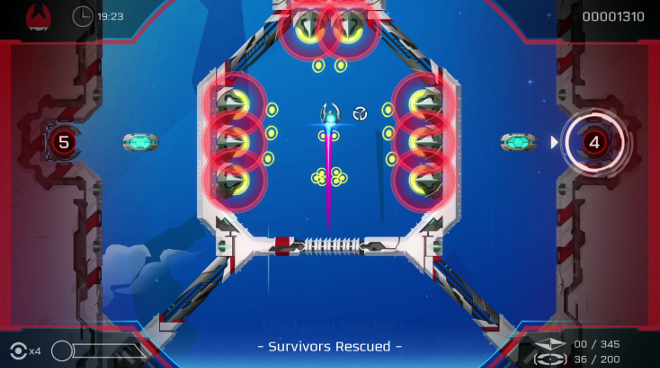 Joris de Man returns to the series to provide an excellent, adrenaline-pumping soundtrack. It never overindulges, interferes or corrupts the experience, but that's just the worst thing I can say about it. It beats the beat that feels right, and it never bops, to the advantage of all.

That audience split comes heavily into play here. Myself not so adamant a score chaser, I'm not itching to get back into it, but the obsessive may see the game as a treasure trover. Accomplishing the best possible time while collecting all that needs collected nets a perfect rating, the ultimate satisfaction for, of course, the perfectionist.

Trophies, online leaderboards, collectibles and a pretty sweet interactive credits scene help bring a modern take to an arcade experience. It's a small but admirably filled out package. 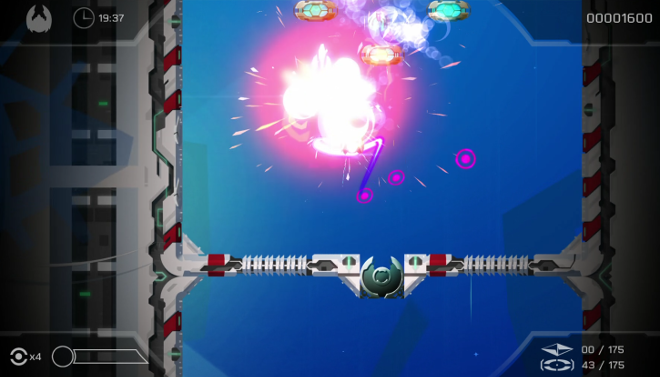 My qualms with the game's identity and lack of overt motivation likely signals a desire for more than what an arcade like title is meant to offer. Still, 'Velocity 2X' is impressive in its devotion to its namesake, and even more so in the advances it makes past the original title. Adding the sidescrolling segments was a risky idea that paid off, not because of sheer luck, but because the developer knew exactly how to accomplish that same feeling of speed and urgency on foot as in the void violent space. Not competency, but real talent in level design, highlights 'Velocity 2X' as a pristine example of the common "teach them, test them, then move on" theory of progression, all at a lightning-fast paced sure to go unmatched until the next of the series.