Xbox One retail disc version reviewed with a focus on the single player offerings.

Developer Techland is no stranger to the zombie/action-horror genre, having created the hit game 'Dead Island' and its pseudo-sequel 'Dead Island: Riptide.' When the studio's follow-up was unveiled, it appeared at first glance that the game was the introduction of the tropical zombie basher to the new generation consoles. However, Techland and publisher WB Games surprised gamers by introducing an entirely new IP called 'Dying Light.'

Despite the claim of a fresh experience a new IP brings with it, right off the bat, 'Dying Light' needed more to distinguish itself. With 'Dying Light,' Techland unveiled a first-person action game where the player battles though a zombie-ridden open world using weapons of opportunity, while being invited to collect resources to craft outlandish upgraded implements of mass undead destruction. While this describes both 'Dead Island' games to a T, the developer promised both a new parkour free run first person system and a day/night cycle that ratchets up the difficulty level. These major features were promised as a means to completely redefine a familiar experience. The burning question leading up to release was if those would be enough to separate one IP from another. 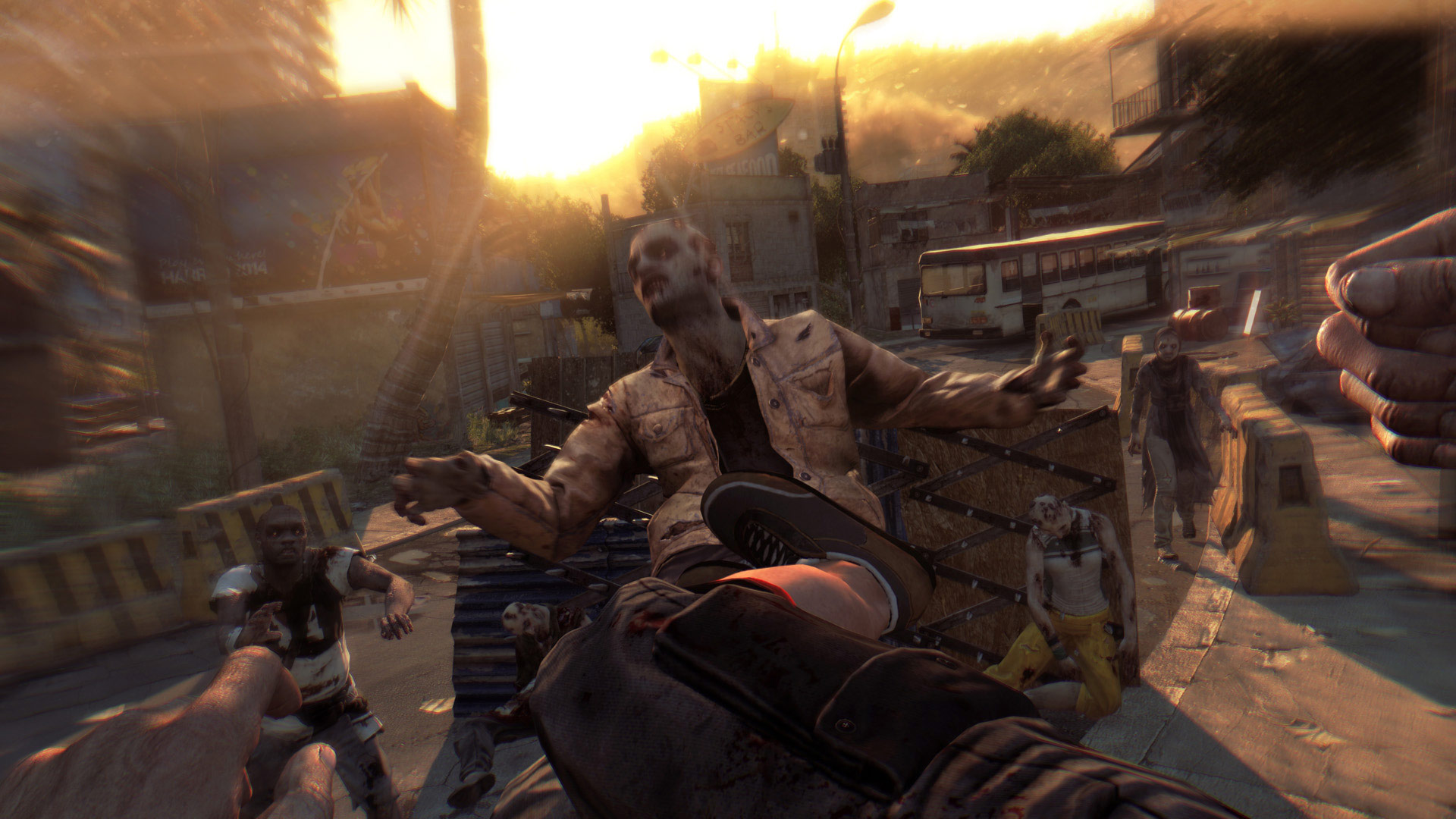 I was doomed as soon as the game began. Immediately after a bungled air drop into the fictional Mediterranean town of Harran, my in-game alter ego, Kyle Crane, was overwhelmed by a horde of zombies and bitten. Mere seconds before I came to a premature conclusion, I was rescued by a pair of survivors and dragged to safety within a rundown apartment building called the Tower. The Tower is the game's home base of operations and where I met a ragtag group of survivors who created their own safe, confined world. To fight off infection and the effects of a bite, a drug called Antizin is required. Fortunately, a relief organization called GRE periodically dropped the drug into the Harran quarantine zone, and Antizin acted as the impetus for many of the characters' motivations. Anxious to earn my place, I offered to help the Tower leaders stay alive not only against hordes of undead, but also against a violent contingent of mercenary-like survivors led by the psychopathic Rais. 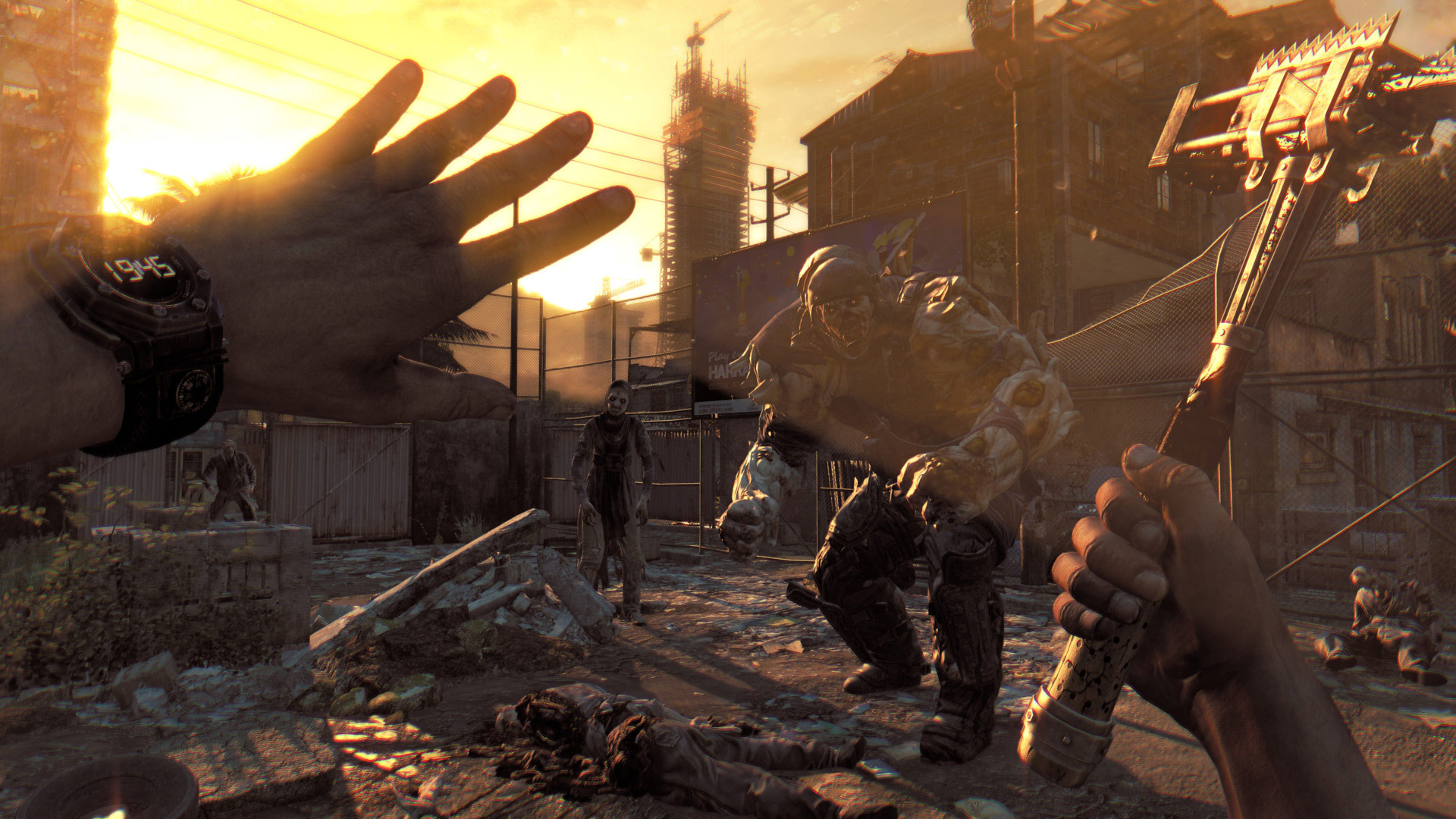 However, helping the Tower community was not why I really dropped into Harran. Through 'Dying Light's' substantial single player campaign I frequently checked in with my mystery handler via radio, and his directions often forced me to betray my new friends in order to further a sinister agenda. These secretive radio rendezvous provided more story depth than I was expecting from 'Dying Light,' however this part of the game's plot rolled into a fairly predictable twist. Unfortunately, the rest of the game's subplots ended up being standard-issue zombie apocalypse clichés (i.e., protect me while I do this, go there and fetch me that, clear out this area, etc.).

Throughout the entire bloody affair, the one constant was the zombie hordes. While Harran is not the largest open world environment, every corner is packed tightly with a variety of zombies. From the standard walker to the special mutations that spit acid, explode, are slower but stronger, run quickly and otherwise forced me to adjust my combat strategies. Unfortunately, the standard zombie walker models repeated more often than I would have liked and the special zombie breeds were mostly restricted to a single instance or two.

As dangerous as every nook and cranny of Harran was during the day, it was fairly tame compared with the slaughterhouse the streets became after dark. One of the two primary ways 'Dying Light' separates itself from Techland's other zombie games is with a focused day/night cycle. At night the game becomes a different experience. After the sun sets, a brutal new zombie type called Volatile begins roaming the environment. Extremely fast and extremely powerful, the Volatile will instantly kill you if he sees you, guaranteed, especially since a second or third are usually waiting in the wings.

The game gives the player a choice to sleep through the night, but doing so is to miss out on some of 'Dying Light's' most tense and thrilling moments. Likewise employing stealth to traverse the night means taking advantage of the doubled Agility and Power experience points that are offered at night, and in turn the nocturnal player can snake their way through the game's impressive upgrade skill trees more quickly.

The second way 'Dying Light' separates itself from 'Dead Island' is with a new parkour free run system. I was highly impressed by how well this mechanic was implemented and how natural it felt when transitioning in and out of combat. After a brief adjustment period, I was leaping across rooftops and scrambling up walls without a hitch. The vertical structures can be both fun to climb and a potential safe/heaven slash side-track. Whenever glimpsing an open window, some curiosity as to the contents can flash, and the desire to parkour over can become quite strong, at least for a while. 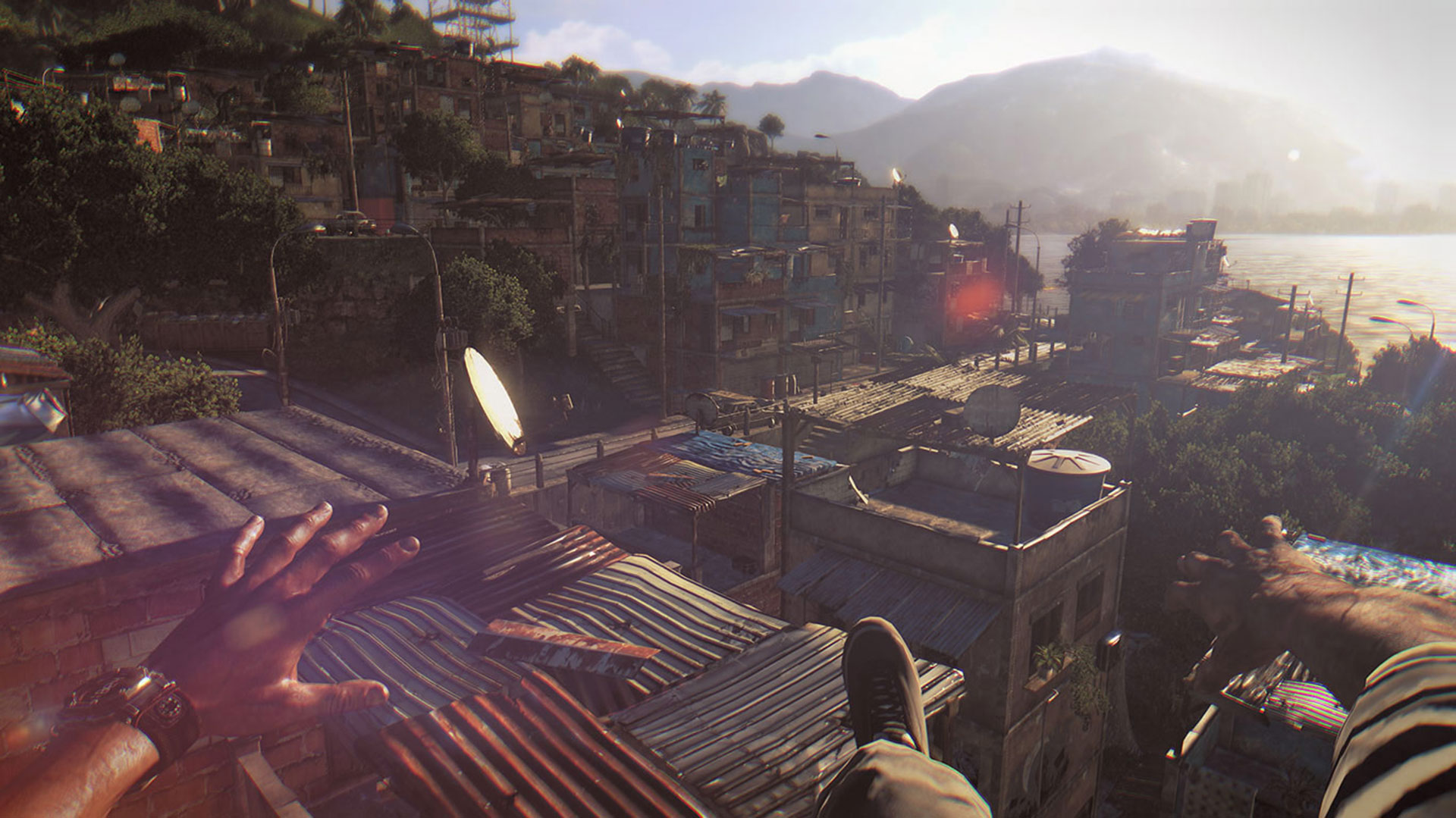 Running for your life is thankfully not your only defense in the game. The environment is scattered with any number of objects and tools that can used to bash and slash zeds. By collecting blueprints and the proper random objects, these weapons of convenience can be buffed with electricity, fire or poison. Unlike 'Dead Island,' 'Dying Light' allows you to repair and craft weapons without having to hunt down a workbench and no money is required, only the proper parts. Melee combat is an absolute blast. The controls are responsive and precise, allowing me to lop off limbs or bash skulls like a grizzled warrior. The game also contained a couple of extra hand-to-hand combat mechanics which allowed me to counter lunging zombies and throw them into fire, spike traps or off long drops. The variety of ways to take down the undead in 'Dying Light' kept combat interesting after my (seemingly) 800 millionth kill.

The biggest problem I have with 'Dying Light' is ultimately one of aesthetics. In this regard, Techland took a step backward from 'Dead Island.' In 'Dying Light' there are not enough indoor areas to break up the monotony that grew as I repeatedly trod the same relatively small world. One of the most appealing aspects of 'Dead Island' was the game's readiness to take you into a variety of environments (resort, police station, grocery, etc.). Very little of that exists in 'Dying Light.' What's more, this is Techland's third game of its kind to take place in a third-world slum filled with shanties, dirt alleyways and burning barrels. It's time to place one of these games in a more posh setting, which is what hopefully will happen with the Los Angeles-based 'Dead Island 2' later this year. 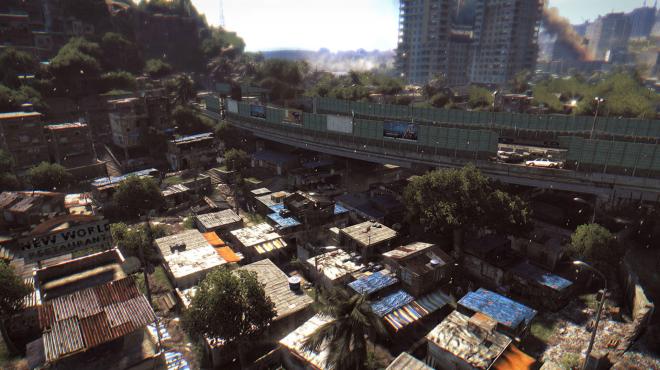 The day/night cycle is one of 'Dying Light's' most important features and Techland's own Chrome Engine 6 handles these transitions impressively. Daybreak brings a slightly bluish hue to the environment as the intensity of the sunlight slowly increases to midday, blasting Harran in bright, neutral light. As evening approaches, the city washes into orange hues before darkness sets in. The sunlight pierces trees and other structures as the engine dials up the intensity of god rays for a stylistic touch.

Attention to small detail gives 'Dying Light' a decidedly "next-gen" feel. Trees blow around in the wind, as do small bits of trash and detritus, giving Harran a keener sense of life. While the zombies certainly look detailed, more impressive is their clothing, which flaps around in response to wind. The zombies also bump into each other and their environment in a realistic way. One particularly impressive instance was when I was trapped in a doorway and fighting off countless attackers pouring through. A pile of bodies began to accumulate and the newly arriving zombies climbed up onto the lumpy, unsteady mass, often losing balance and falling while trying to approach me.

Other visual elements of the game did not fare so well. Textures are extremely hit or miss. Certain textures, like the baked and cracked asphalt of Harran city streets, looked sharp, but quite a few others, like rocks and earth, are extremely muddled. Interior environments were reused extensively making much of Harran seem like one big pre-fab city. 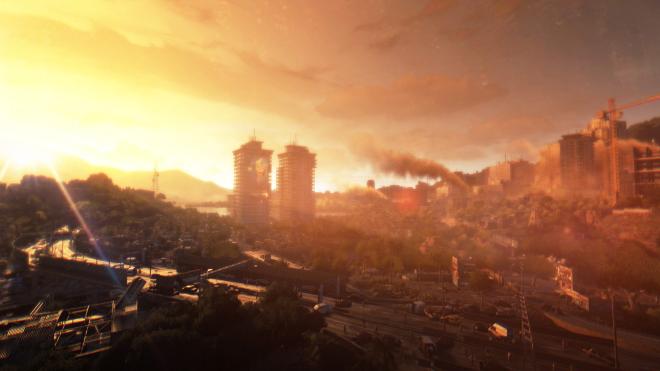 The audio in 'Dying Light' is made up primarily of sickly groans and blunt force traumas. Effects-wise, the game is competent but not more than what I really expected it to be. Voice acting is on the hammy side of the cliché meter, which is par for the course in a game taking place in a zombie apocalypse.

Much of the game's score is a sublime throwback to the synth-driven scores of Giallo Horror and John Carpenter films from the '70s and '80s. However there are also moments in the score punctuated by the now-overused style of Middle Eastern singing that every movie and video game taking place east of the Mediterranean has used since 'Black Hawk Down.'

'Dying Light's' single player campaign could take the player a good 40-50 hours if he or she takes the time to complete every task. The game also includes 4-player co-op and a zombie vs. humans competitive multiplayer mode to extend the experience. All in all, Techland has provided a lot of bang for the buck in this package.

Aside from the usual pre-order bonuses differing by retailer (comprised of exclusive outfits or weapons blueprints), the most significant bonus for early buyers is the 'Be the Zombie' game mode, which went from pre-order bonus to free for all buyers. This mode, which is also playable online, puts the player in the shoes of a Night Hunter zombie similar to the game's Volatile, but the Night Hunter uses tentacles to traverse the environment and attack humans. 'Be the Zombie' is essentially a defense game where you protect a set of hives throughout the map from human attack. Techland tried to give this mode depth by providing the Night Hunter with its own skill tree to traverse, but ultimately 'Be the Zombie' is an appetizer to the main game's entrée. 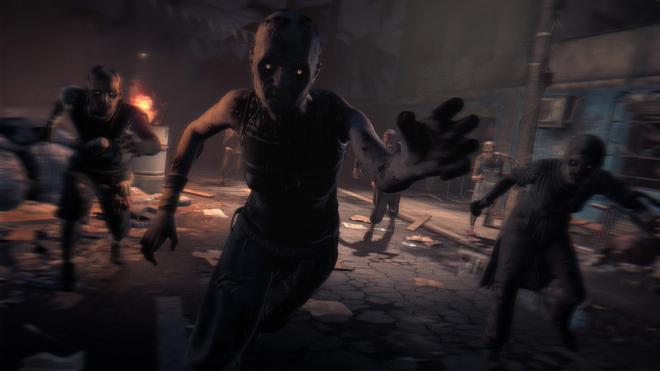 'Dying Light's parkour mechanics are polished, easy to get into, and quite complementary of the whole fight or flight with zombies experience. The combat is solid with a nice mix of capable zombie fighter and too many to handle aspects. The game can be quite electrifying, and there are impressive details that push the game's sense of immersion forward. What's more, its day/night cycle is exhilarating and, more important, brings with it as many thrills as rewards. Unfortunately 'Dying Light' also suffers several nagging flaws. Chiefly the repetitive aesthetics and uneven graphics quality detract noticeably from the overall fun.

What it comes down to is there was always something in the game pushing me forward. Whether it was saving a kidnapped mother or delivering a supply drop to earn more experience points, 'Dying Light' was difficult to put down