There are a lot of players in the console headset game, and with good reason, those who play games regularly online or offline need a headset both for crucial game chat and increasingly exquisite game audio. And thus, just as Microsoft was readying their latest and theoretical greatest console, one company stepped forward with the audio chops and reputation to tackle the needs of Xbox gamers everywhere. After collaborating directly with Microsoft and studios such has Turn 10 ('Forza') and 343 Industries ('Halo'), Polk Audio made their gaming debut with the N1 Soundbar and the Polk Audio Melee. There was just one little problem, their Xbox One focused headset, the Polk 4 Shot, would have to wait.

Polk, just as did all other headset manufacturers, had to wait for Microsoft to release the Xbox One Stereo Headset adapter. Once that crucial product slipped from 2013 to March 2014 (aka 'Titanfall' time), the Polk 4 Shot was forced to wait as well. And unfortunately, that was not the last yime the Xbox One Stereo Headset adapter meant trouble. Now though, as the summer days come to close, gamers need a proper headset, and many, like myself, don't see the bundled Xbox One headset as great go-to option. Let's look instead at the Polk 4 Shot. 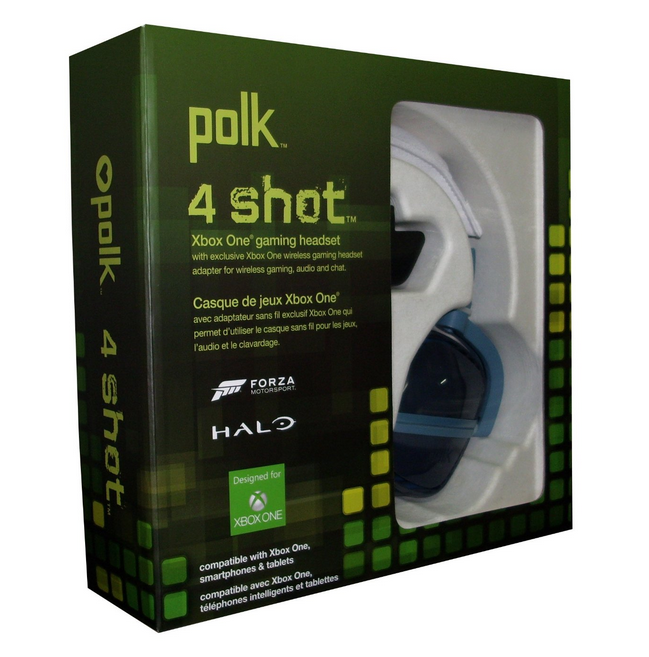 Before diving into the quality of the headset, it's important to note the contents of the box. The box for my launch model includes one Polk 4 Shot (Nova Blue) with retractable gaming mic, a gaming cable (3.5mm to 3.5mm), a single-button cable (also 3.5mm to 3.5mm, but with a dangle mic/button combo), and finally, a Xbox One Stereo Headset adapter. The package also contains a micro USB cable, which is needed when flashing the Xbox One controller for use with the Xbox One Stereo Headset adapter. Last of all, (but not least), there is the Chat Pro microphone. It was missing from my launch package (more on that later), but it is easy enough to go on to Polk's website and sign up to receive one in such a case.

There are two areas where the Polk 4 Shot shines, and one of those is in the audio quality department. If you are familiar with Polk products- headphones, speakers, etc., then you likely expect a certain audio fidelity. The thing is that normally when an audio namesakes take a stab or two at "gaming products," it normally comes off as an existing product that has been retuned to exude bass. Not the case with the Polk 4 Shot. 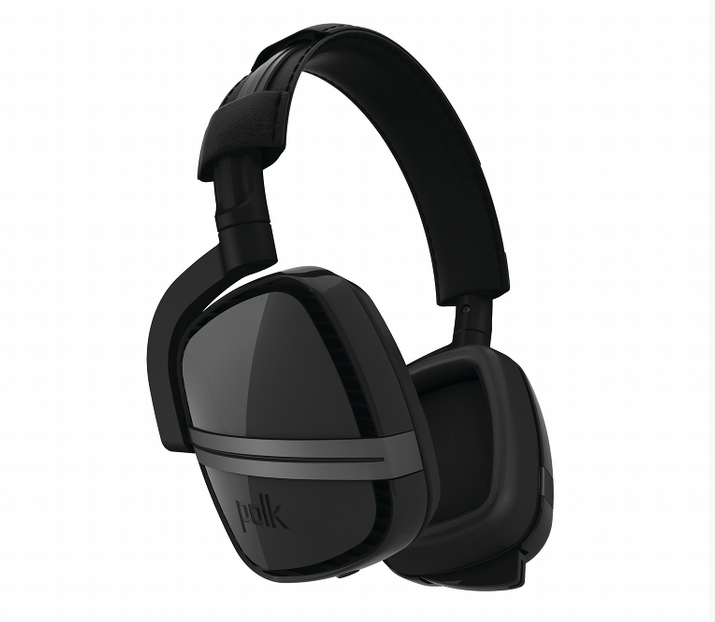 It's here where the access to Microsoft game developers, sound designers, and so forth, has paid off. The Polk 4 Shot is one of the most balanced headsets most are likely to encounter. So long as the source has sufficient power, the Polk 4 Shot will find all of the notes there are to reproduce. As with any such sound reproduction, this means that flaws in the recording can become more evident, especially with regard to voice actors and their microphones. But in something like 'Forza 5,' the Polk 4 Shot allows the user the joy of hearing their own car's exhaust note and revs even amid a crowded race.

Make no mistake, this is a stereo headset. It's simple enough to locate a sniper in 'Battlefield 4,' but where a surround headset has chopped the sound field piece meal into sub channels, the Polk 4 Shot has the whole of its 40mm driver to reproduce the music, sound FX, ambient, chatter, etc. to its full extent. This proves just as true when in chat as hearing others is fairly straightforward.

The rub and the caveat that I've littered here and there is that the Polk 4 Shot is a passive headset, and thereby dependent on its source. 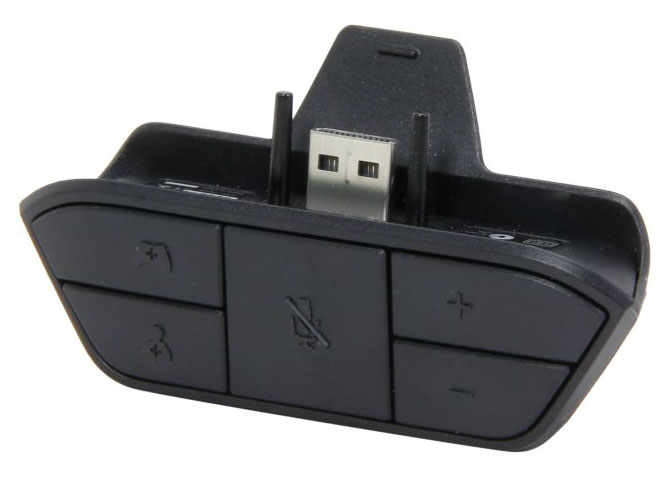 As mentioned earlier, the Xbox One Stereo Headset Adapter is included the box, which is good, since it's essential. By connecting Microsoft's adapter to the controller, (and flashing it if needed), the controller gains a 3.5mm headset port as well volume, and mute controls. The left side has two buttons which allow the user to emphasize game or chat volume. To be clear, I'm not a fan of the adapter. Not only is it a $25 extra accessory (though included with many headsets such as the Polk 4 Shot), but it all around doesn't deliver. Any wireless controller has a lot to contend with to be lag free, and supporting chat is a secondary function. That means that game audio is a distant third. Ultimately, after delaying and releasing the adapter, Microsoft made the decision that headset makers could make their own adapters. (Let's call that a lesson learned). Polk showed their prototype off at E3, but I don't know of any headset maker not planning on some form of implementation meant to improve quality. 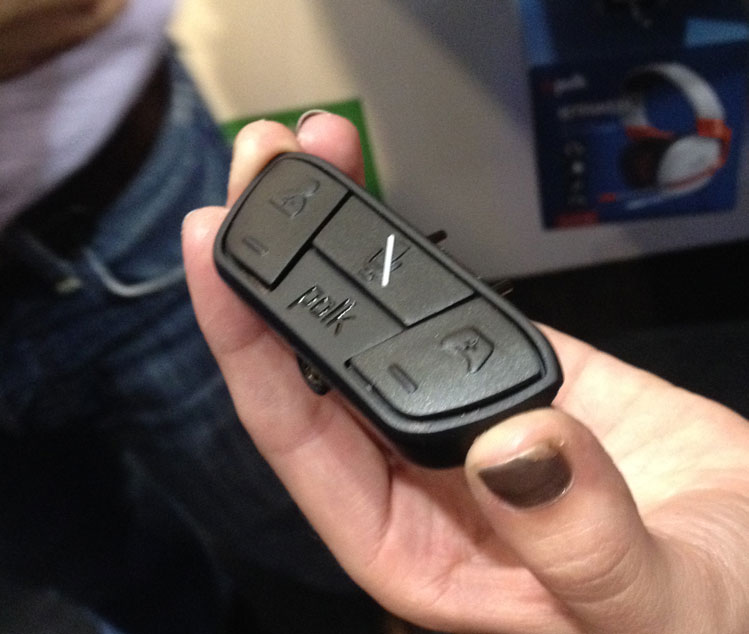 For the Polk 4 Shot and audio quality on the Xbox One, the audio quality is good, but falls short of the headset's capability. The headset isn't loud naturally and is less so on the Xbox One. That doesn't mean quiet. Game audio can be a nice non-deafening level. But switch the headset over to a source with more juice, and you may be shocked to hear how much louder it can be. 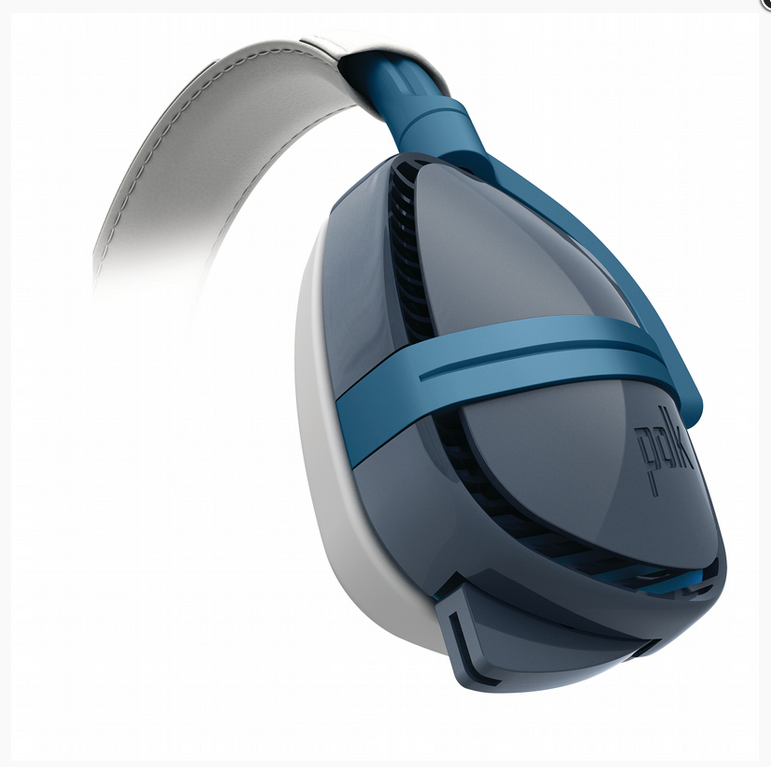 While the Xbox One Stereo Headset Adapter falls shy in terms of supplying the juice needed to fully realize the audio reproduction, the mic is in much worse shape. The Polk 4 Shot has a retractable near-field microphone in the left ear cup that seems to work well on everything that isn't the Xbox One. (It even works on the PS4.) Trying to use the dangly mic on the Xbox One is even worse. Despite an update from Microsoft post launch, there is something in the Xbox One Stereo Headset Adapter's firmware that mitigates the mic performance on the Polk 4 Shot. The result is that your own (unmonitored) chat volume is very low on the Xbox One. It's audible, but too quiet to use when gaming unless you enjoy being talked over/drowned out by others and by the game.

To Polk's credit, they immediately acknowledged the problem, and after Microsoft's fix was not enough, they engineered a no joke solution. While work on the Xbox One Stereo Headset Adapter is ongoing, the current method for chatting with the Polk 4 Shot on the Xbox One is the Polk Chat Pro Microphone. It's free for current 4 Shot owners (go here) and should be included in the box for new purchasers.

The Polk Chat Pro Microphone intrudes a bit on the 4 Shot's style (and a little on its comfort), but its braided cable is a nice touch. It sits in line with the right ear jack, and it is nicely articulate. It reminds me of the smaller mics used by nefarious spy support types in the 90's. While it very much fixes the quiet problem, it also is so sensitive that it easily picks up other in the room with you. This is fine for me, but might not be great for those in crowded circumstances. 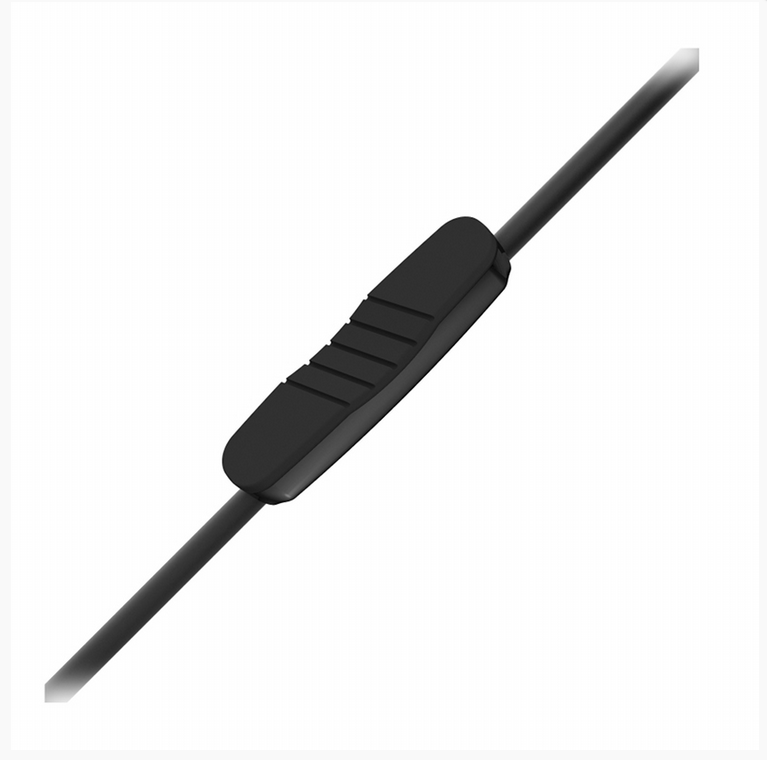 Though it's marketed towards the Xbox One, the headset is just dandy on other devices. The mobile cord with its dangly mic is excellent when powered by an iPhone. The PS4 gets along just fine after adjusted the mic sensitivity in the settings. Otherwise the 4 Shot is free of controls and is just plug and play. (The near-field mic is muted when tucked away or when using one of the other mics.) Gaming on the PC also illustrates what I stated above about how well the headset handles the cluttered sound stage of a AAA game, and PC jacks usually (but not always) pack more power than a Xbox One wireless controller.

With the cluttered mic options out of the way, it's time to look at the Polk 4 Shot's other big strength, comfort. Like many headphones and headsets, the 4 Shot can lay flat, but unlike many other headsets, this isn't just for transport and storage, it's also to rest on the shoulders. (The Chat Pro mic dampens this to a degree.) There's little doubt that the DNA of the 4 Shot carries a powerful sequence of comfort that is woven into the headset's design, and the materials in use speak to that characteristic. 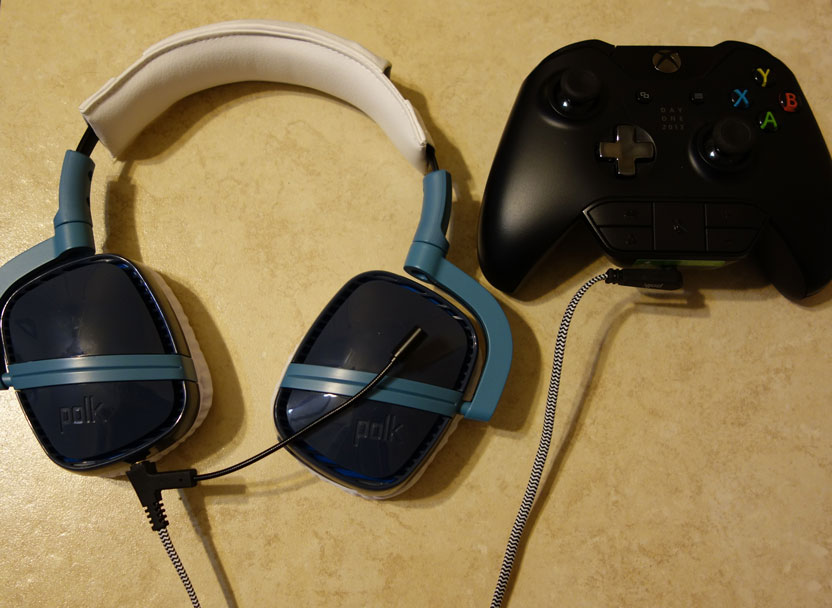 The headset checks in nearly 11.5 ounces, which could be considered heavy for plastic, faux leather and metal construction, but in use, the headset is expertly balanced and never tugs at the ears or pushes on the head. It's more comfortable than other 40mm headsets even while being 40% heavier.

Available in three color schemes, I really like the look of Nova Blue, which is the focus of the review. Though the Ink Black is a nice choice (Desert White is a distant third), I have found the mix of blue (metal and plastic) cans with white faux leather headband and ear cups to be pretty stylish. I dislike the glossy plastic of the ear cups, but the metal headband and design works too well to trouble me with its aesthetics. (It looks less attractive as a black headband in the other color schemes.) The combination of style, comfort, passive design, and audio clarity means that this a great headset to flash around when on foot or on an airplane if you are into that kind of thing. 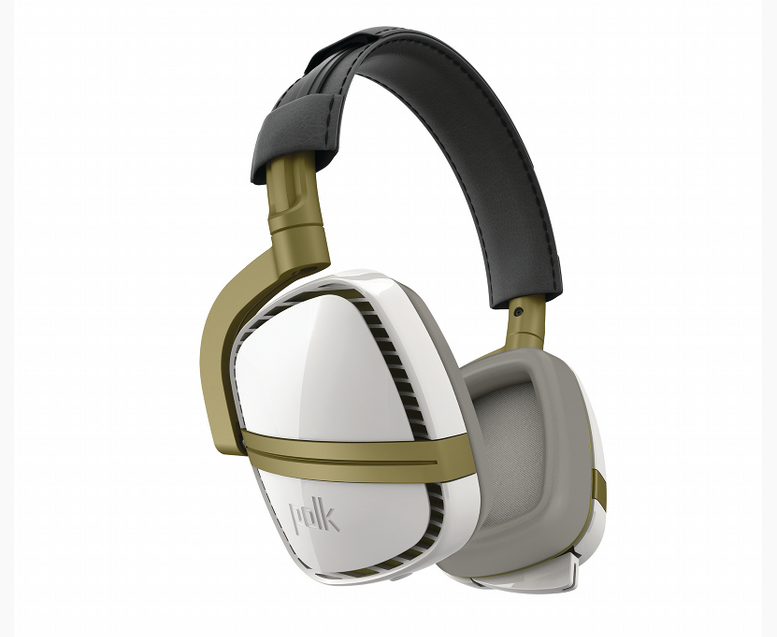 When it comes to durability, I'm not sure much can go wrong short of a serious, heavy impact like being caught in a car door. The cable is detachable and should be easy to replace should it suffer long term from wear and tear.

The Polk 4 Shot is a bit of a mixed bag. Excellent passive audio quality, comfort and style are partially offset by the marriage to the Xbox One Headset Adapter and the need to use the free Chat Pro Mic on the Xbox One, even if the headset is more capable on other devices. If the first and last thing you check in a headset is bass and loudness, look elsewhere. Otherwise, price is like to be a deciding factor. At $159.99, many users will expect more features, even with the inclusion of the Xbox One Stereo Headset Adapter. During my review, however, the real price seemed consistently around 30% less, which makes the headset considerably more attractive. For those looking for an Xbox One headset, bear the Polk 4 Shot in mind.