The Game Itself
2.5 Stars
The Video: Sizing Up the Picture
3 Stars
The Audio: Rating the Sound
2.5 Stars
Replay Factor
2 Stars
Bonus Content
3 Stars
Bottom Line
For Fans Only

Digital PS4 version reviewed. A review of the PC version is also available.

In Dutch, there's a saying "a dozen trades, thirteen miseries". None of my gaming experiences have ever truly yielded great success. No one invited me to the Nintendo World Championships, I never claimed the Atari 'Waterworld' Crown of Life and I have yet to achieve 100% completion on 'Grand Theft Auto IV'. That's okay. We can't all be heroes, and there can only be one (Highlander rules). When it comes to rhythm games, my track record is adequate. I unlocked Daft Punk in 'DJ Hero', I kicked Donkey Kong's behind in 'Donkey Konga' and I set the Nintendo DS on fire (more like a pilot flame) via 'Guitar Hero Modern Hits'. However, nothing in the history of all that's made up of pixels and bytes could ever prepare me for the brutal beating I was about to receive with 'KickBeat: Special Edition' for the PlayStation 4.

'KickBeat: Special Edition' tells the story of Lee (and, once unlocked, Mei), a clad-in-white average guy whose a prisoner by his own choice. In his opening monologue, he mentions being intrigued by a Sphere of Music guarded by a sect of monks led by Master Fu. This Sphere is said to contain each and every melody in the world, from past, present and future. Without further explanation, or further ado, the game then begins with a training session that's easy on the thumbs. Once Lee is selected, the proceedings move on to the first level 'Monastery, Part One'. Southpaw Swagger's It's Showtime is the accompanying soundtrack for this easy mission. Standing in a circle, Lee will need to kick and punch an endless array of enemies through a combination of buttons, (mostly) timed to the beat of the song. Gameplay wise, there isn't much to tell. It's a rhythm game. You press buttons, you hope to achieve good points. There's a flimsy story attached to the proceedings, but that shouldn't distract from the simple fact that it's a musical game. Before going in, you know what to expect. Dancing on cue while performing ninja moves. Beating guys, and getting beat, to a beat. All too easy, right? 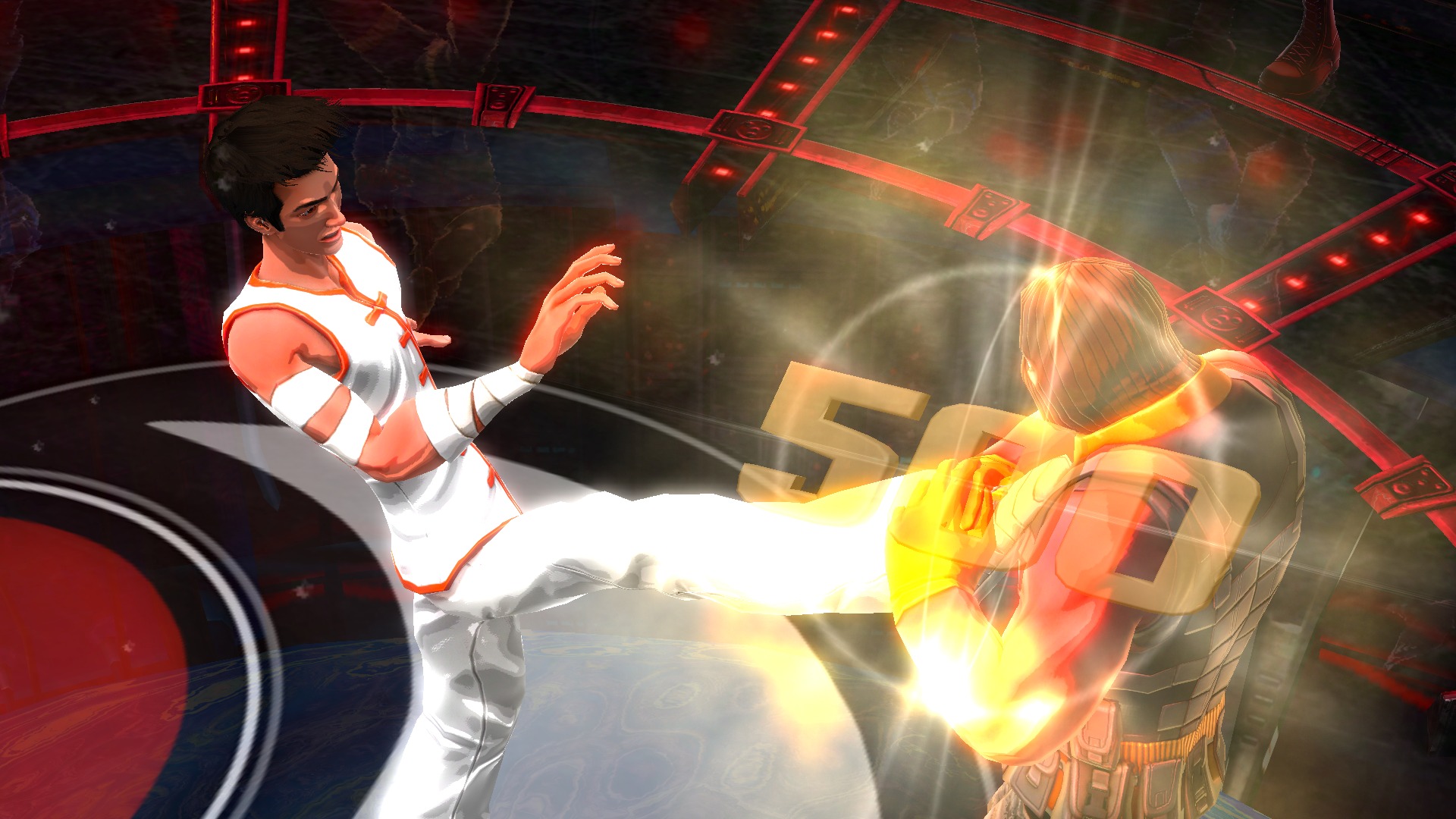 Wrong. In a very unzen like move, the difficulty ramps ups significantly starting with the second level, 'Monastery, Part Two'. At this point, even on the 'Normal' setting (the others are 'Hard', 'Expert' & 'Master'; there's no 'Easy'), 'KickBeat: Special Edition' turns itself into a relentless, brutal and unforgiving game. "Great kid, don't get cocky" may be a mantra to live by on a daily basis, but even the cockiest kind of gamer will be surprised by how hardcore 'KickBeat' is within its first seconds. 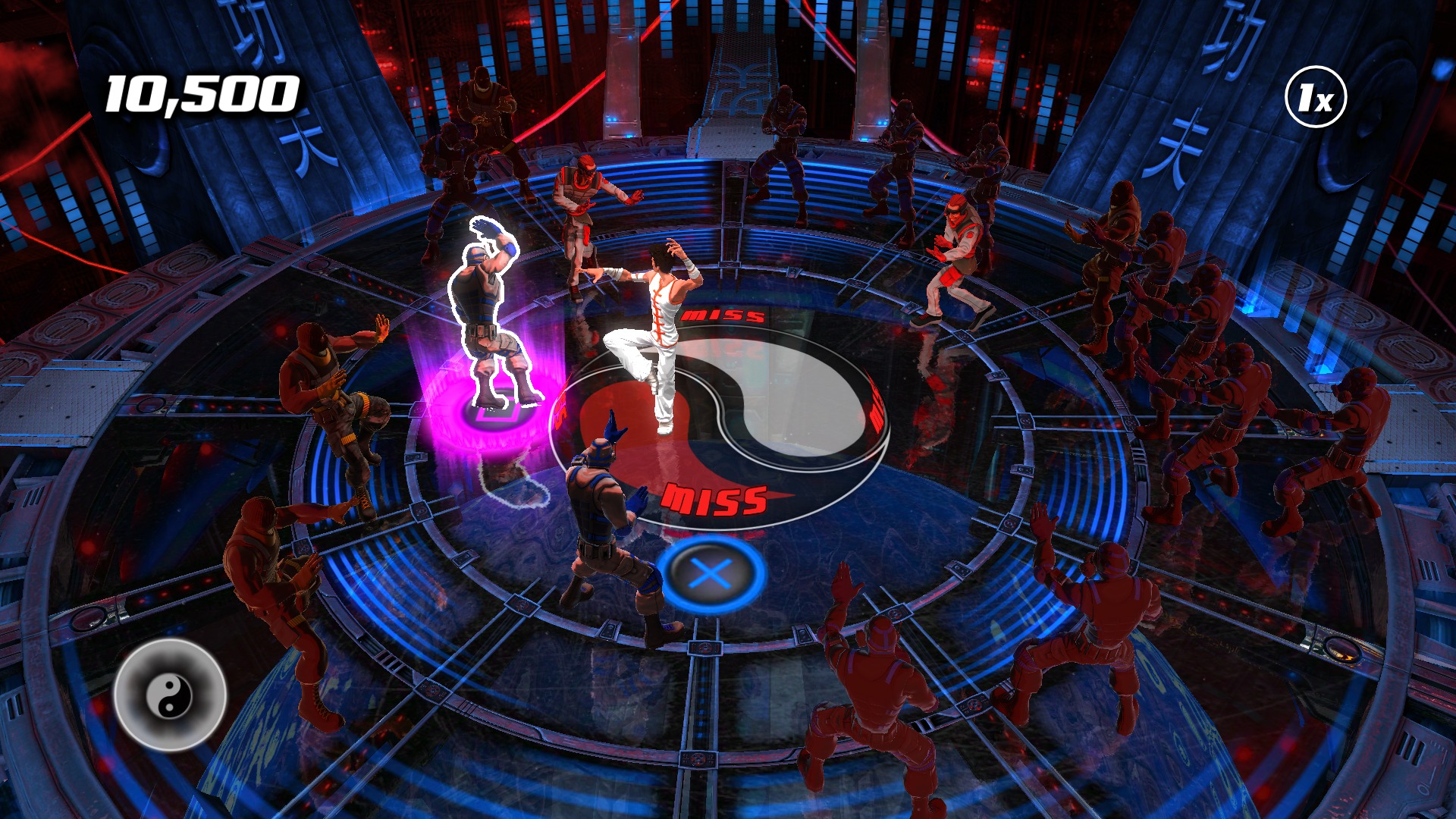 Defeat was thus faced in the second level. Eight times in a row. Convinced that the lapse of skill was just a momentary aberration, a fresh dose of energy and a determination only exceeded by those who invented the word 'determination' resulted in another go at 'KickBeat' the next day. Seven tries later, spasms appeared and froth oozed out of my mouth. Rabies had taken over. 'KickBeat' deserves special dissection in medical school, for it can bring out the worst in test case subjects. And then, on the third day, the Lord said: 'Let there be light'. Out of the blue and without a clear reason, success. The subsequent third level was inexplicably completed in one go. Unbelievable, and preposterous. Continuing from there on, levels alternated between laughably easy and incredibly hard.

Without a realistic difficulty curve, beating a level feels like a try of frustrating luck. Ten-year old yours truly would have already thrown this game out of the window out of pure rage and consternation. There's no fun in being beaten again and again and again on the easiest difficulty setting. There's no incentive to come back and try again, when there are no rewards but constant failure. Only true gaming legends, beasts with 100% accurate muscle memory, or Los Angeles replicants from 2019 will be able to play this game the way it was intended by its makers. "What am I supposed to do?" asks Sam Flynn in 'Tron Legacy', just before entering the Games. "Survive" is the short and cynical answer of one of the sirens. Good luck trying to survive 'KickBeat: Special Edition'. 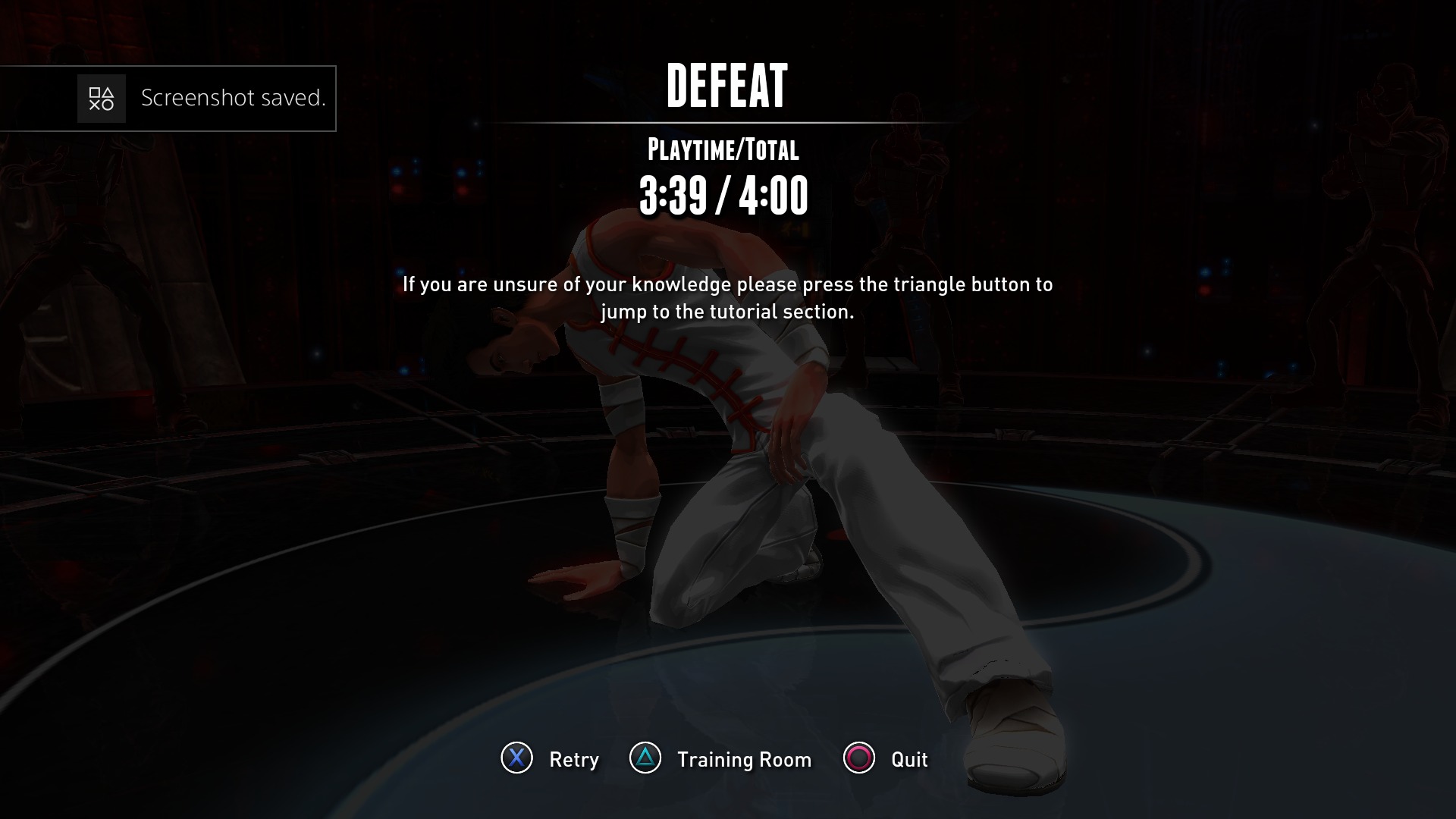 As reviewed, a permanent internet connection was required to play the game. This apparently falls under one of Sony's rarely used, but still available publisher options, which is a big shame. One should not need internet 24/7 once the game is installed to your hard drive. 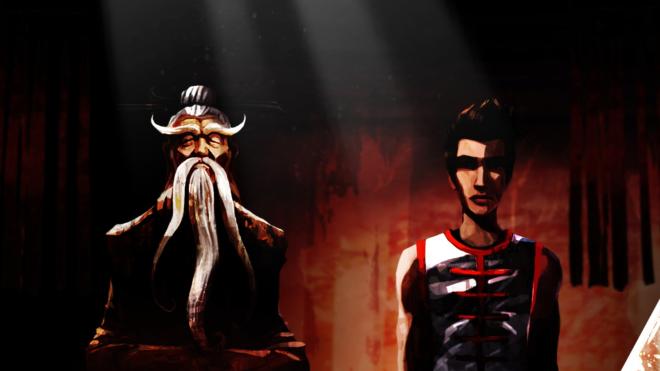 Graphics-wise, 'Kickbeat: Special Edition' offers polygon power that the PlayStation 3 could pull off in stand-by mode. Perfunctory, colourful and cartoonish, but never an indication of the graphical prowess of your shiny new PlayStation 4 console. That's not criticism, however. 'Zelda: The Wind Waker' is a far-cry from realism, but it's one of the most beautiful games ever. 'KickBeat' boasts well-rendered characters and flashy arenas. Clearly, a lot more work went into the environments compared to the character models. The style used for the cutscenes works very well, with sketchy comic book-esque artwork. 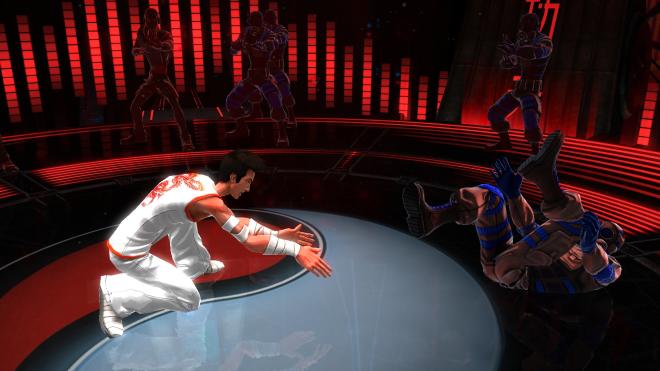 Welcome to 2002! 'KickBeat: Special Edition' has gathered a line-up of artists who are not quite contemporary. Be ready to mash buttons to the tunes of Marilyn Manson, Papa Roach, Southpaw Swagger, Rob Zombie and others. Nu-metal for the win, eh? Sound effects are very basic. 'Pow', 'kick', 'smash' etcetera. The cutscenes shine once more, for they get a fitting symphonic and bombastic score.

The replay factor completely depends on the continued appreciation of the tunes. Once a level is completed, a star rating (out of 5) can be improved upon. As stated in the paragraph above, the second level has a lot of replayability. Of course it's not exactly of the kind that I would reccomend. 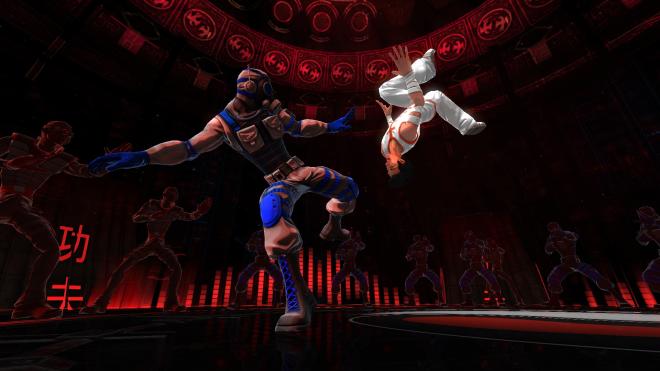 Quite a lot of goodies can be unlocked by performing above the norm: outfits, trophies, a few alternate playing modes, cinematics ... 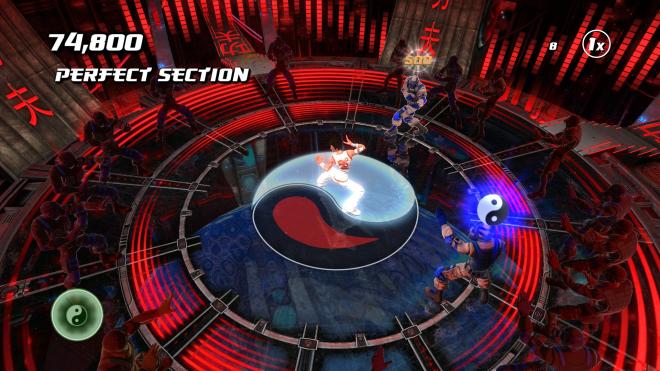 Rarely engaging, never inspiring and strangely shallow, 'KickBeat: Special Edition' will appeal to rhythm game junkies craving for a mash-up with 'Mortal Kombat'. However, in the musical gaming niche, a lot of better and more engrossing titles are available for purchase, albeit not on the PS4. With a questionable song selection, moderately convincing graphics and an incredible difficulty curve, 'KickBeat: Special Edition' is for hardcore gamers only. A missed opportunity.