The Game Itself
3.5 Stars
The Video: Sizing Up the Picture
4 Stars
The Audio: Rating the Sound
3 Stars
Replay Factor
1 Stars
Bottom Line
Worth a Look

For all the high praise (and sometimes bad press) Tim Burton movies have received, very little of his output has been granted a video game adaptation. The two 'Nightmare Before Christmas' games (one for Game Boy Advance, one for PS2/Xbox) were adequate and 'Alice in Wonderland' for the DS was fun, but the less said about 'Charlie and the Chocolate Factory' the better. The visionary director hasn't yet crossed over to a bona fide video game hit. Maybe he should take matters into his own hands, Vin Diesel style, and come up with a true gaming masterpiece? Fans may rejoice, for 'Murasaki Baby' oozes Burton's quirky and eccentric flair from every pore, while at the same time being totally original, unique and - just to be clear - created without any input by the director. No mean feat, but is it an essential title all the same?

In the side-scrolling 'Murasaki Baby', a boyish girl is looking for her mommy while carrying a balloon that must be kept alive at any cost. Once the balloon pops, it's game over (in this case: back to the last checkpoint). In a weird subversion, destroying other characters' balloons is encouraged and doesn't spell doom at all. On the contrary, these popped examples generate different interactive backgrounds and offer new solutions. The key to your own balloon's survival lies in the destruction of others. 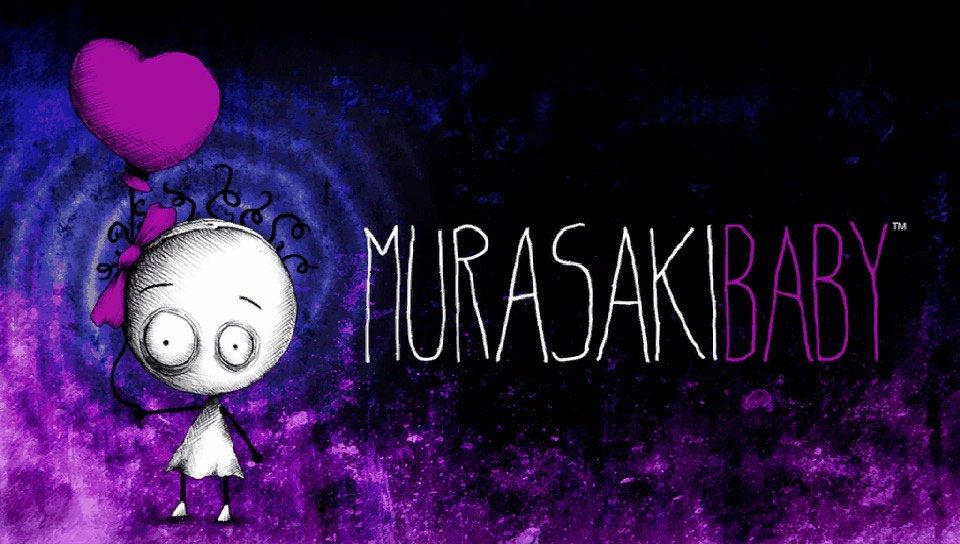 Every level features different backgrounds that one needs to switch by swiping the back screen (or, as Sony calls it, the touch pad). The results vary: one such background sends a stormy wind through the level, one lets it rain, one houses scary creatures, etc. Different backdrops will always aid you in your quest. In level 4, the powah of the back screen (you read that with James Earl Jones' voice, right?) even allows for the player to create a topsy-turvy landscape by literally turning the Vita 180 degrees. And again, and again within a timeframe of a mere two seconds, because the floor - alternating between up and down - is disappearing below the baby's feet. Impressive, most impressive. Italian developers Ovosonico have used most of the (rarely used) Vita tricks in the book. In some instances, the player must even combine two or more rear screen actions within a time limit, which makes for some frantic gaming. Excellent!

The player must take the character by the hand by touching the Vita's front screen. Everything is touch screen sensitive. No buttons are pressed until the penultimate level. Only after an hour or two of playtime do the analogue sticks come into play. This comes as such a surprise, that the game explicitly has to state "and now, dear gamer, you have to use a button" (by showing the sticks and their intended movement, wildly flashing on the screen). No pause menu will appear by pressing "start" of "select". In fact, there's no ability to pause at all. Worries about saving were calmed when it turned out the game seems to remember where you left off even after you have closed the application. 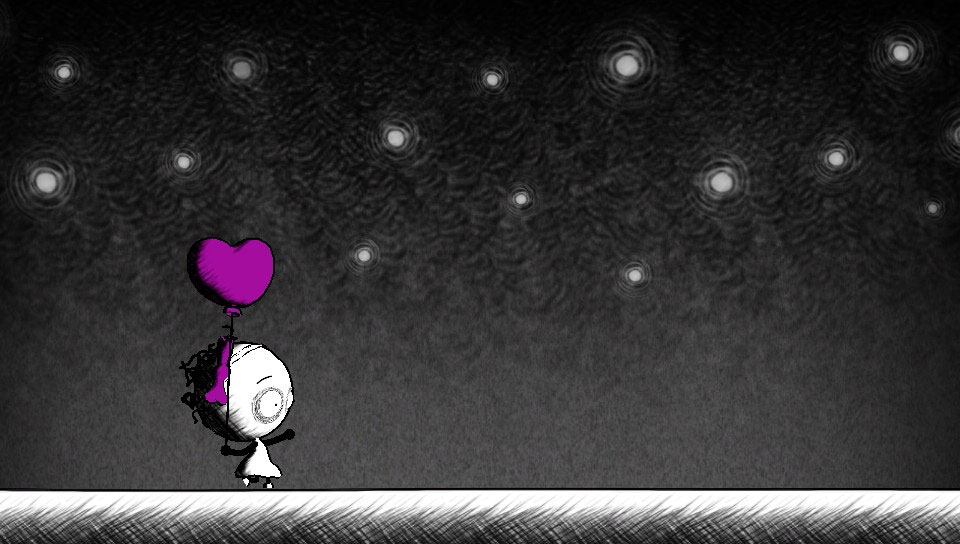 Highly unique touches are all around. At random points, a strange boy will enter the story. Friend or foe, he keeps you on your toes. Between the first and second levels, he gently takes your hand (which insinuates he's more friend than foe), but later on he tries to steal your balloon. Simple acts such as ringing a door can turn into a scary affair: a huge, teethy Sarlacc will possibly be lurking behind. Always proceed with caution. Puzzles populate every level, warranting a problem solving approach. One more funny bonus: "Ico the cat" gets a 'thank you' mention in the credits. These guys must be huge Fumito Ueda fans, if you are to name your pet after an acclaimed video game.

The never-ending quest and stress to keep your balloon alive reminded me of the first GameBoy game I ever received (apart from pack-in 'Tetris') way back in 1992: Christophe Andreani's 'Bubble Ghost', in which the eponymous Ghost had to protect his Bubble no matter what through a series of increasingly difficult mazes. Any game that can instantly whiz me back to the carefree days of my youth - when games were still a novelty, my world revolved around LEGO and the internet was an abstract and distant concept - receives high marks and deserves high praise. 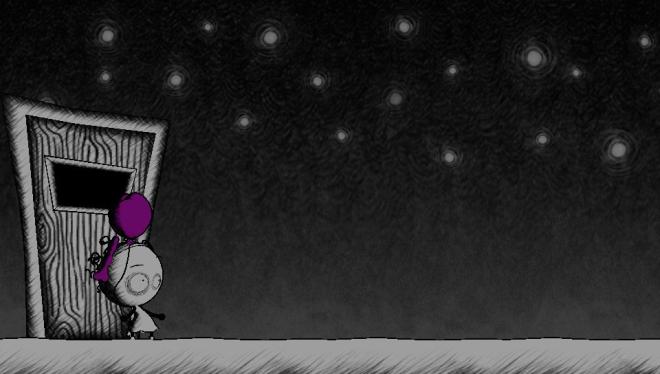 'Murasaki Baby' boasts cute graphics made up of sketchy lines and dim tinges. The protagonist has a pronounced, very round head that eclipses her bodice by a wide margin. Strangely enough, her mouth seems to be located above her eyes. This is only visible when she smiles excitedly, or babbles incoherently. The mouth/head design is subsequently explained in a later level. The different backgrounds are always lively, bursting with detail and psychedelic tableaus that challenge the 17 million colours the OLED-screen can produce under ideal circumstances. Graphics-wise, this game is lovely and ingenious. Charming to the very last frame. 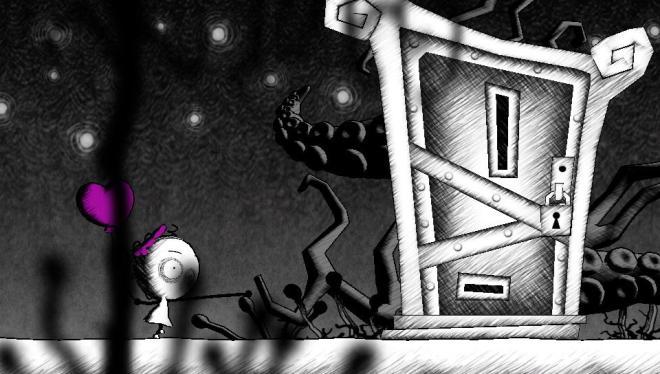 On the audio front, there's not too much going on. Sparse music, a few melodic tunes and unintelligible dialogue (save for a constant 'Mommy!?' cry). Which makes 'Murasaki Baby' a universal game, suitable for all languages and cultures. Easy and cheap to localize. Director Massimo Guarini enlisted Gianni Riciardi to compose the score. The end credits are accompanied by a very arty-farty Japanese song. It must be heard to be believed, but doubtless, your eardrums won't like it.

Once you have finished the game, there's little incentive to return. Unless you want to marvel at the beautiful graphics once more. No level select either, unfortunately. Starting a new game will overwrite any previous progress you have made, too. Quite annoying. 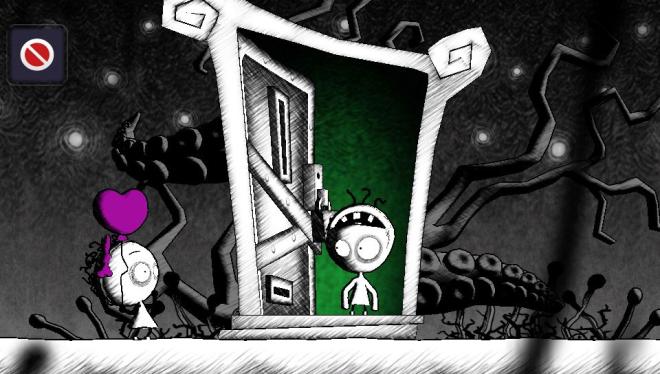 Often weird, sometimes scary and always intriguing, 'Murasaki Baby' has indie written all over it. This isn't a game that would fly off the shelves of a brick-and-mortar store, but the shelf space on PSN tends to be a lot more diverse in its offerings. Challenging, but never unfair, and featuring super charming artwork, 'Murasaki Baby' demands to be played by the curious and the unfazed. What a pleasant surprise. Molto bene, Ovosonico!