The Game Itself
3.5 Stars
The Video: Sizing Up the Picture
5 Stars
The Audio: Rating the Sound
2.5 Stars
Replay Factor
2 Stars
Bottom Line
Worth a Look

Digital version of the PlayStation 3 game reviewed. The game is bundled together with the four animated pieces as part of a single digital purchase.

'Short Peace' is an interesting compilation of five pieces of work that are meant to embody different periods of Japan. Of them, four are short animations. 'Possessions' is a story about a traveler that goes to rest within an abandoned shrine during a storm, and has some strange encounters within. 'Combustible' feels like the typical tale of love in pre-modern Japan, with a good deal of fire and beautifully rendered in an art style similar to old wall scrolls. 'Gambo' conveys the tale of a white bear that can understand human speech coming to the aid of a little girl, whole village is under attack. Finally, 'A Farewell to Weapons' is a tale set in the far-flung future, where a post-apocalyptic Japan is haunted by deadly machines and bioweaponry.

But what of the fifth piece of this short, but intriguing compilation? 'Short Peace: Ranko Tsukigime's Longest Day' is a video game created by Crispy Inc. and Suda 51 to represent Japan in the modern day. Starring the average high school girl, who also happens to be an assassin setting out to kill her father, this piece of 'Short Peace' promises to provide a unique experience.

'Ranko Tsukigime's Longest Day' is a bit difficult to describe. It could be seen as platformer, but its closest gaming kin would probably be the endless runner. But that isn't right either; the game is certainly not endless. Ranko does not move forward on her own, and is controlled by the player. The hook is to keep moving forward. 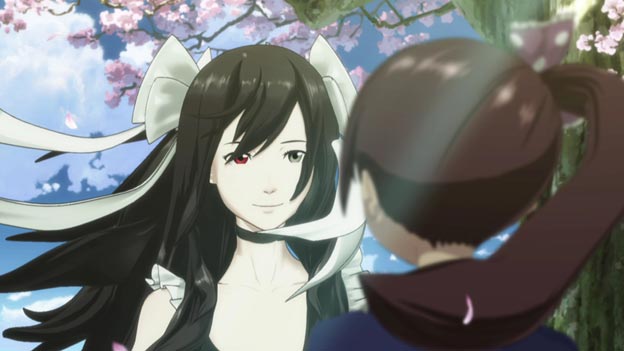 Ranko must keep moving ever rightward, and the motivation is clear as poor Ranko is accosted at all times from mysterious assailants on the left side of the screen. Lag behind, and the foes will reach her, ending the girl's life and forcing a stage restart.

Therefore, this game requires speed and precision above all else. And yet, while Ranko is harried, there's some breathing room, and with bullets that Ranko can shoot, mystery foes' can be stayed momentarily. Bullets are limited, however, and must be charged up by defeating 'normal' enemies. This can also be done with bullets, but it's far more effective to cut them down at close range; doing so will provide an explosion of color across the screen while racking up a combo, in addition to the effect of getting said enemies out of the way.

Because of this, 'Ranko Tsukigime's Longest Day' is a game of juggling all of the fast and furious action on screen at once. In many of the stages, I've had to run headlong towards enemies, slashing and jumping with precision. Elsewise, an enemy from behind could quickly catch up, and I would have to stop moving for a split second, fire a bullet and hopefully, knock them back. Thankfully, missing a jump doesn’t end the game. Rather, I would fall down to lower area of the level, one that is typically slower, but has more enemies. More enemies means more slashing and being able to build up the bullet meter that much quicker. 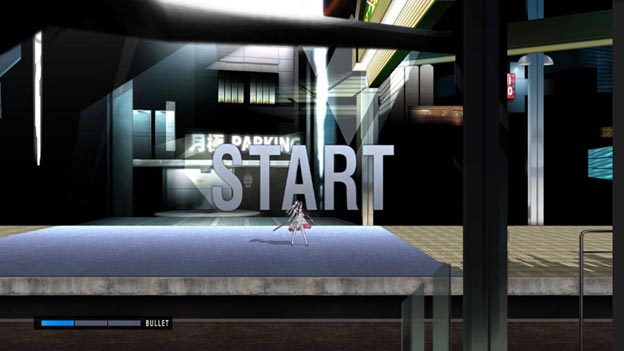 Changing up the mechanical dynamics up a bit is the occasional odd boss battle interspersed between the stages. One boss feels straight out of a shoot-'em-up, while another is an odd wrestling match of sorts. These battles do a decent job of breaking up the typical running gameplay, but seeing as most of them happen near the end of the game, these bosses seem a bit more tacked on than thoughtfully planned out.

Mechanically, this is about it for 'Ranko Tsukigime's Longest Day'. The game only lasts about an hour at most, and there is no deviation in terms of plot or ending. However, despite the game not seeming like much, it's a wonderful and different representation of what many may view as modern Japan. Seeing as this was the title's purpose in the whole of 'Short Peace', this effort fits in nicely. There are a few hiccups a little earlier on, as the initial deluge of stages lack for any interesting cut scenes, but the game is a fun diversion, nevertheless. 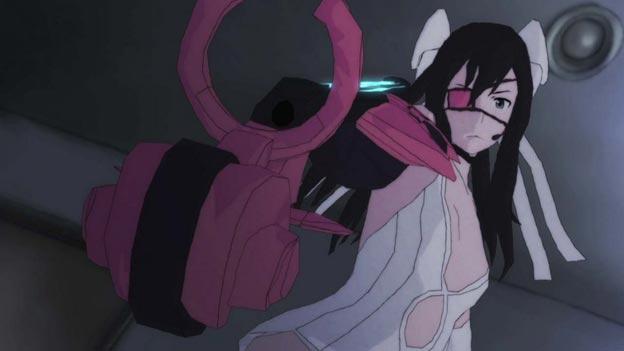 As a part of a compilation of animations representing Japan, 'Ranko Tsukigime's Longest Day' does not disappoint in the graphics department. While running through the stages themselves, the backgrounds are serviceable and Ranko herself sticks out well enough, but where the game's visuals stand out are when enemies are defeated. When hit, they explode in display of bright Japanese symbols, filling the screen with swathes of color and grandeur. It's to the point that sometimes it can even be difficult to see additional enemies ahead in the levels, leading to seemingly cheap hits… but at the same time, I feel as though this effect is intentional, to help drive the game's view of modern Japan as a land full of constant distractions.

In between the levels, players will be treated to various cutscenes. The interesting thing about 'Ranko Tsukigime's Longest Day's' cutscenes, however, is that most of them are rendered in completely different art styles from one another. The beginning of the game is cast in a clear and clean looking style, but other scenes of the game pull from horror-themed anime, manga, etc. and even go so far as to have a couple scenes drawn in a completely obscure (bordering on absurd) style. It feels in line thematically with trying to show what modern Japan is about. With clashing art styles and a penchant for ridiculousness, the game makes a fine parallel to Japan's current melting pot of a culture, full of clashing views and variants to always turn one's attention to. 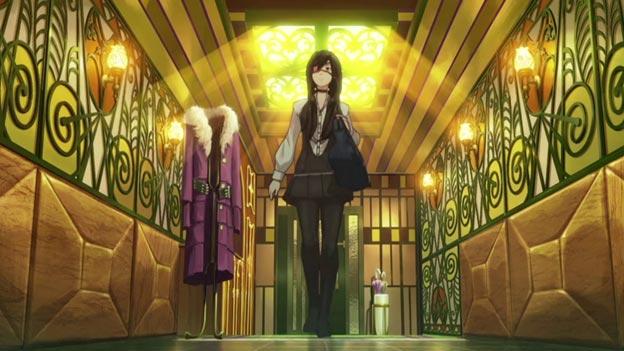 On the sound front, 'Ranko Tsukigime's Longest Day' isn't nearly as impressive. The game's voice tracks are Japanese only, and are serviceable, though none of the voice actors really stand out. The game's soundtrack is typically drowned out by the multiple sound effects from slashing and shooting enemies, with only the stage clear song being notable for being… well, weird. Nothing in terms of audio really stands out, that's likely because the art direction is so explosive and in-your-face that it simply pales in comparison. 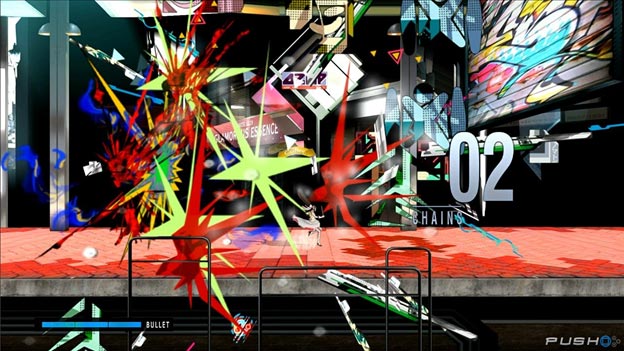 In terms of replay value, there really isn't much to do in 'Ranko Tsukigime's Longest Day' after the main game has been beaten. There are multiple paths in the levels to explore to find gift boxes, which unlock new costumes for Ranko, and also concept art for the game. However, due to the game's very fast pace and the explosion of graphics each time an enemy is hit, I found that trying to replay the stages more an exercise in frustration than it was worth. 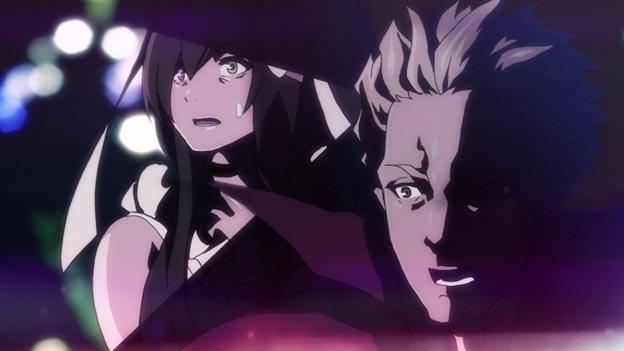 On its own, 'Ranko Tsukigime's Longest Day' isn't really a noteworthy game. It's pretty enough, and has an intriguing art direction, but it's woefully short and its lack of replay value makes the title less than an ideal purchase.

However, if taken as part of what makes 'Short Peace' whole, the game takes on a whole new light. All of the works of 'Short Peace' are meant to represent certain aspects and time periods of Japan, and in that aspect 'Ranko Tsukigime's Longest Day' is an overwrought, yet fascinating look at what the country is like in the modern day.