The Game Itself
3 Stars
The Video: Sizing Up the Picture
4.5 Stars
The Audio: Rating the Sound
4 Stars
Replay Factor
3.5 Stars
Bonus Content
0 Stars
Bottom Line
Worth a Look

At some point in the past decade, people realized that 2D platformers didn't just have to be one, Mario-inspired thing. They could take that basic core of running and jumping, so immediate to the immersive advantages of video games, and expound their own mechanical and artistic creativity on top of it. Now, indie developers are often throwing a singularly new mechanic into the mix and running with it, hoping to build a fully-fledged game with depth and nuance in the end. Frima Studio's 'Chariot' is one such game, and players are tasked to search for the perfect burial ground while hauling some important cargo, the coffin of a King, which must be yanked through catacombs as the search goes on. Seems like a good idea to start a game, but let's see how well it holds up.

It's the prerogative of game developers to find some mundane task and somehow make it fun. Lugging a recently dead King's coffin around, for instance, doesn't sound like an enjoyable afternoon. Once his ghost starts pestering you about finding the perfect sepulcher, that afternoon could turn into a hellish nightmare of burnt muscles and emotional turmoil. Luckily, a virtual coffin weighs nothing and a ghost in this cutesy, light-hearted world is just another guy, like that skeleton shopkeeper awaiting you above the catacombs. What then remains is an initially intriguing idea, where navigating an underground labyrinth of precarious jumps, deathly falls and gem-filled walls becomes more than a simple manipulation of the little player character. Though latching a rope onto the wheeled coffin is easily done with the simple pull of the right trigger, the task of navigation is a bit more complex and a bit more compelling than the average platformer. 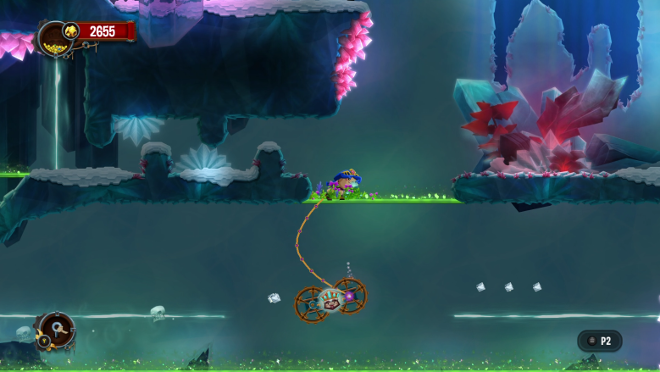 At first it's a simple joy to understand and perfect that understanding of the game's unique navigational complexities. Every small ledge requires that you either push or yank the boisterous object, acts as common as a jump gleefully made a challenge of planting one's feet, extending or receding slack on the rope and, eventually, making that last surge for final respite. Whatever the challenge, it's undoubtedly made more interesting due to the basic addition of a large, clumsy box-on-wheels. I really do wish I could say 'Chariot' gets better from there, but it doesn't, it just sort of keeps going.

The problem is this: where most good platformers continually build on their core mechanics, 'Chariot' struggles to move beyond world one, instigating strangely annoying thematic twists on the level design and, beyond that, failing to support those twists with appropriately new levels.

These are large, marathon-style levels that trade extremely short bursts of design ingenuity with repetitive slogs of a jump-yank-pull-jump routine. Throw in some ice and the ground becomes more slippery, but all that does for the platforming is add the additional step of planting your feet every time you pull the chariot, not requiring any different sort of approach at all. World two introduces darkness, but the level design hidden underneath that darkness is virtually the same as it was before. This is the theme of themes, that they barely matter. 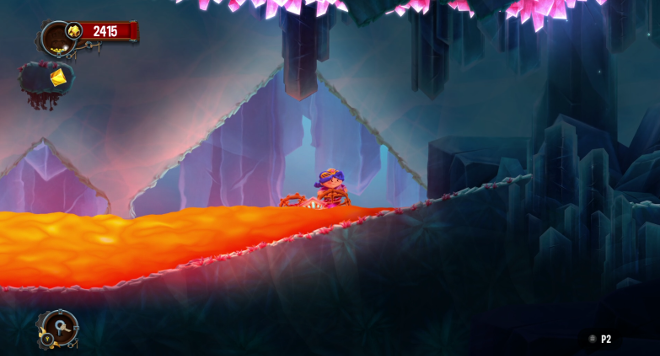 Even at times when some new thing seems to open up the game, like platforms only traversable by either the chariot or the character, or lava that rises up and down, requiring the use of the invulnerable chariot as its own dynamic platform, it's only a brief venture into newness. These loosely-constructed, behemoth-sized levels work hard to kill any sense of adventure through utter repetition.

An example: a conveyor belt-like level that guides the chariot along a massive downhill-slope, forcing my knight to raise and lower herself along the dangling rope to avoid obstacles. The level could have ended there, and it would have been a solid, refreshing level. Instead, it repeated the same trick about five times, without introducing anything new to the idea. It just kept going, for no discernable reason other than to pad the experience. 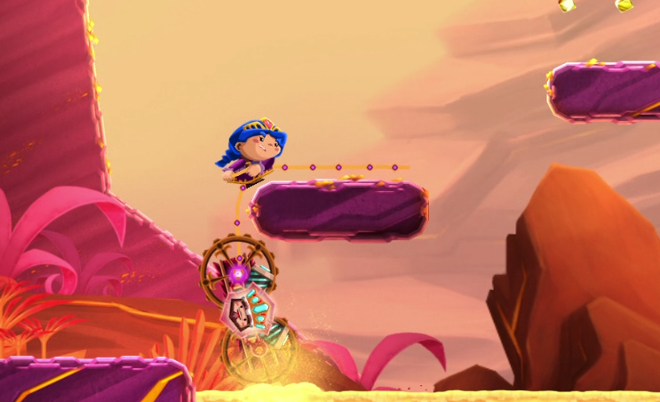 Off the beaten, repetitive path are challenge areas meant to liven up the experience. Early on, I'd come across a little sign with three stars on it, indicating a tough challenge off to the side. I'd take the opportunity, tackle the challenge and be rewarded with gems or even a coveted blueprint. Great! I achieved something. Only, I didn't. I really, really didn't. The game's primary source of incentive – gems and blueprints are used to purchase chariot upgrades – is rendered completely moot by the fact that those upgrades are just about pointless.

One upgrade – a peg that acts as a temporary anchor for the chariot – has a good bit platforming utility, admittedly, but it's infrequent. Others upgrades have to do with combating "looters," enemies within the levels who do nothing more than steal gems. They don't disrupt the platforming gameplay much, so you're often left with the choice of going after hard-to-reach gems so that you can buy items that will make it easier for you to hold on to those gems, or simply move on and suffer zero set-back for it. Any chariot upgrades required to progress through the primary path of the game are discovered through natural level completion.

By world three I was passing by challenge areas, ignoring the looters as they terrorized the chariot, basically foregoing half the game. There's no penalty, no argument for taking those side-routes other than a cyclical and useless economy and loot system. This unfortunately heavy reliance on both the looters and challenge areas scars a game that already struggles to stay interesting past the first act. 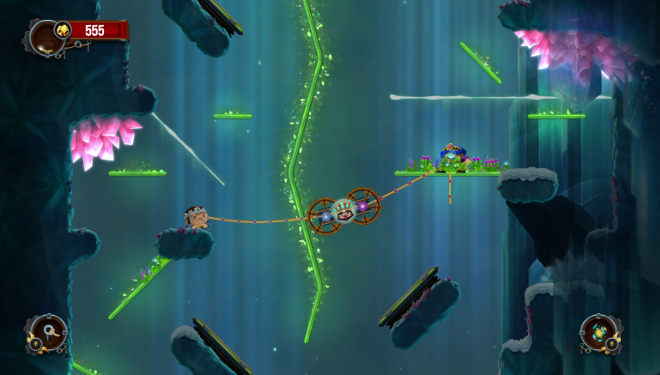 The major redeeming factor to any of this is how well the core mechanics are designed for local cooperative play. A buddy can jump in at any time as a helping hand, and some challenge areas require two people to navigate. Despite the fact that the reward stayed a useless gem, I finally found myself motivated to take on the struggle. Strategizing jumps, tugs and shared-pulls with a co-op buddy is like rediscovering the mechanics, a process I've already described as an essential highlight. As before, just don't expect the feeling to last. 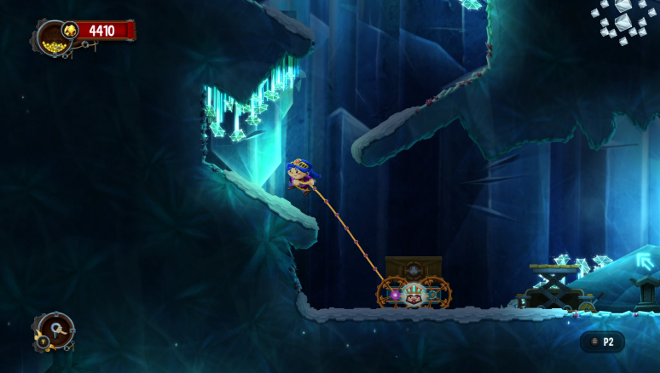 There's a strong sense of personality in the presentation, completely light-hearted and charming, yet nevertheless a bit derivative of medieval tropes. It all runs quite smoothly, boasts of color, and some of the more compelling backgrounds hint at larger thematic ideas that never really bleed into the gameplay.

Of worthy mention are the expressive faces of each character. As the Knight pulls and yanks and jumps, her face is in constant and accordant flux. She speaks her mind with her face, basically. Even so, I'm a particular fan of the talking skeleton shopkeeper. 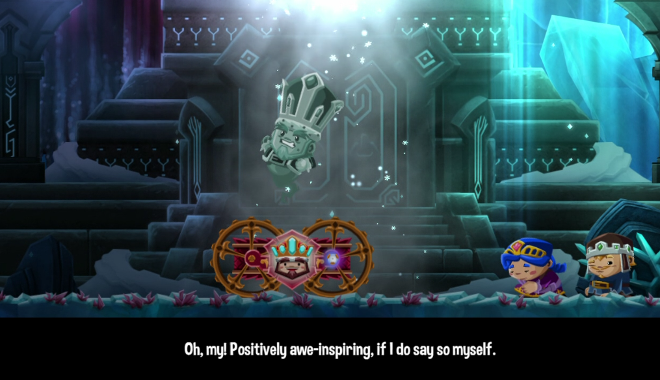 And speaking of talking, the skeleton guy and the dead King are both surprisingly well acted in spite of the mute protagonists. Their lines might end up repeating a little too soon, but they aren't bad lines, and they certainly aren't laid on too thick. It's a breezy atmosphere, thankfully. The background tones never take too much of a presence either.

Going back to collect three crowned skulls per level will give those yearning an excuse to go back. And for the hardcore coffin-toters out there, the game sets up a speed run for each level too, leaderboards included.

The physical weights of the Chariot and the little Knight lugging it around are well considered, as are the tugging and jumping "feel" of things. That's a tough thing to do, especially when the idea is brand new. The tougher thing to do, proven here, is realizing the new concept into an entirely satisfying game.

It's rare to encounter a structural design of a game so hurtful to the enjoyment of its basic gameplay. Had Frima Studio done something, anything, to actually incentivize the loot system, and thus made the challenge areas a worthwhile or even compulsory trip, I might've found the experience more rewarding. Yes, I could've forced myself into the challenge areas for the sake of completion, but it turns out they really aren't that interesting on their own. It's still a lot of jumping and lugging, instead of new, compelling ideas.

Easier still, the team could have broken down the levels into bite-sized challenges, as so many more successful platformers often do, and created a more sensible, simplified overarching structure to better focus the level design. Yet, that might've just further amplified the sense of repetition and lacking creativity from beat to beat. There really is a lot of useless filler going on in 'Chariot,' and not enough surprise. Turns out, lugging a coffin through some catacombs can be just as mundane when pixelated.