The Game Itself
4 Stars
The Video: Sizing Up the Picture
4 Stars
The Audio: Rating the Sound
4.5 Stars
Replay Factor
5 Stars
Bottom Line
Recommended

Digital Xbox One edition reviewed. A boxed copy is due out later this year.

Since its full release in 2011, 'Minecraft' has become one of the most recognizable games of this generation. Its simple, recognizable block graphics, addictive crafting system, and capacity for emergent gameplay have created a massive following. It is the best-selling PC game of all time and the Xbox 360 version was the most downloaded Arcade title of 2012. It is now available on the Xbox One, perhaps later than Mojang intended, but with a few bells and whistles added.

'Minecraft's charm lies in its simplicity, but beneath the accessible surface is a much deeper experience (no pun intended). It is easy to learn and difficult to master. In the traditional mode, called Survivor, you are dropped into a world of pixelated blocks that can be harvested and used for a variety of purposes. As its name would suggest, mining and crafting are significant parts of the gameplay.

During the day, the world is relatively safe and you can go about your business of creating. Buildings, tools, mineshafts, farms, traps, elaborate statues of yourself, and much more are all available to you, depending on your artistic flair. At night, scary monsters emerge from the dark caves of the earth and set upon you and your beloved works of art/hastily constructed messes. An enclosed structure, however small, is sufficient protection against most monsters, and with a bed you can fast forward through the nights. Each full cycle of day and night is around 20 minutes. New players can learn the ropes in the thorough tutorial, although frequent reference to internet resources afterwards is recommended because the game is a bit laissez-faire in educating the player outside of the tutorial. 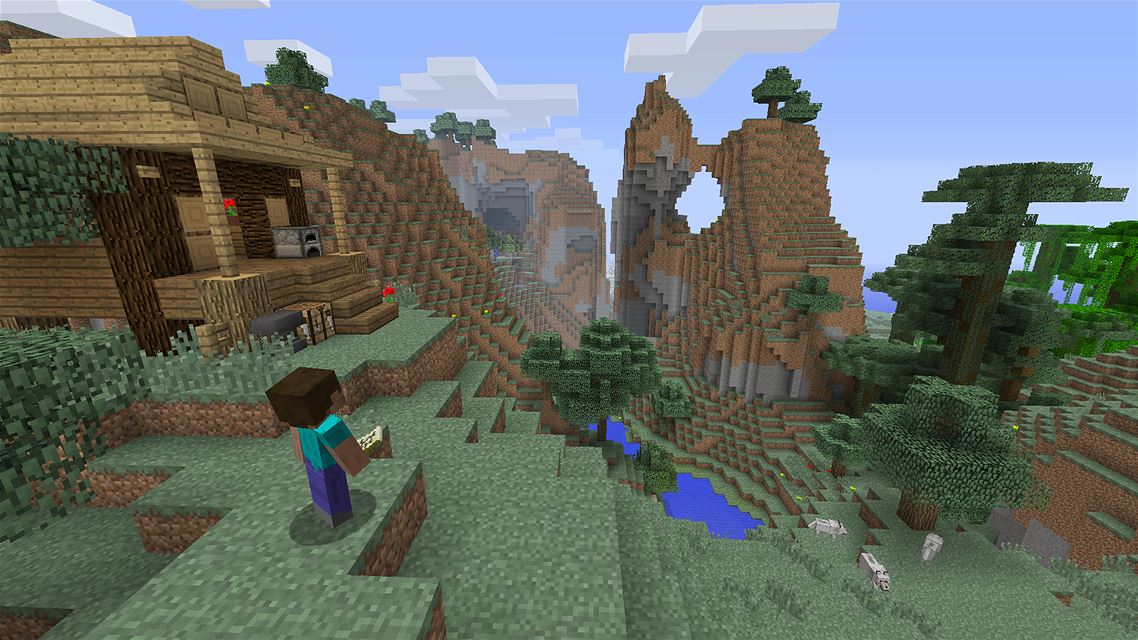 There is no story in 'Minecraft' except the one you make for yourself, and no objectives or missions except for those you plan and carry out. You are limited only by your own creativity and the large palette of craftable items. If you want to make a lakeside cottage and fish all day, you are quite welcome to. If you want to make an exact replica of Machu Picchu, there is nothing stopping you. This freedom is expanded in Creative mode or by cranking down the difficulty to "Peaceful," where you can labor on your magnum opus without pesky monsters slowing down your progress. 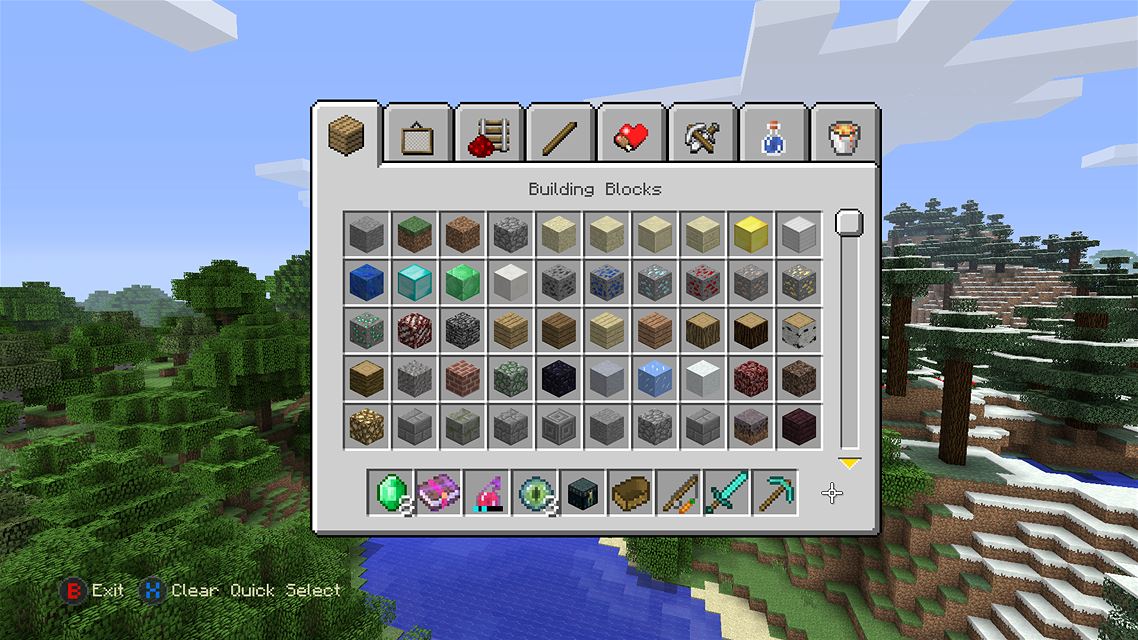 If this sounds like a lot of fun, and a lot of work, both are accurate. The game world is procedurally generated, and each instance is like a strange continent. Sure, there's food, water, coal, and so forth to be found, but the where can vary between different instances. Excavating enough stone for even a modest castle will require a lot of exploring and pickaxes, especially if you play on Survival where the world becomes more dangerous the deeper you go. Of course, it’s in this deeper world where the game really shines. Here you’ll find hidden tunnels, caved-in treasure rooms, dungeons, and rare crafting materials, all in dark and dank caverns far away from the safety of daylight. And that’s not to mention the terrifying, dangerous underworld of the Nether. The Nether can only be reached through player-made portals and is quickly lethal without careful preparation and superior equipment. The death penalty in general is particularly stiff - die and you will respawn at the last place you slept (which could be far, far away) and your inventory will explode outwards in all directions from your corpse in a colorful yard sale. The items will despawn after a time if not collected and can be destroyed, which is very sad if you die in battle against the miniboss known as "lava" and your entire inventory gets torched. 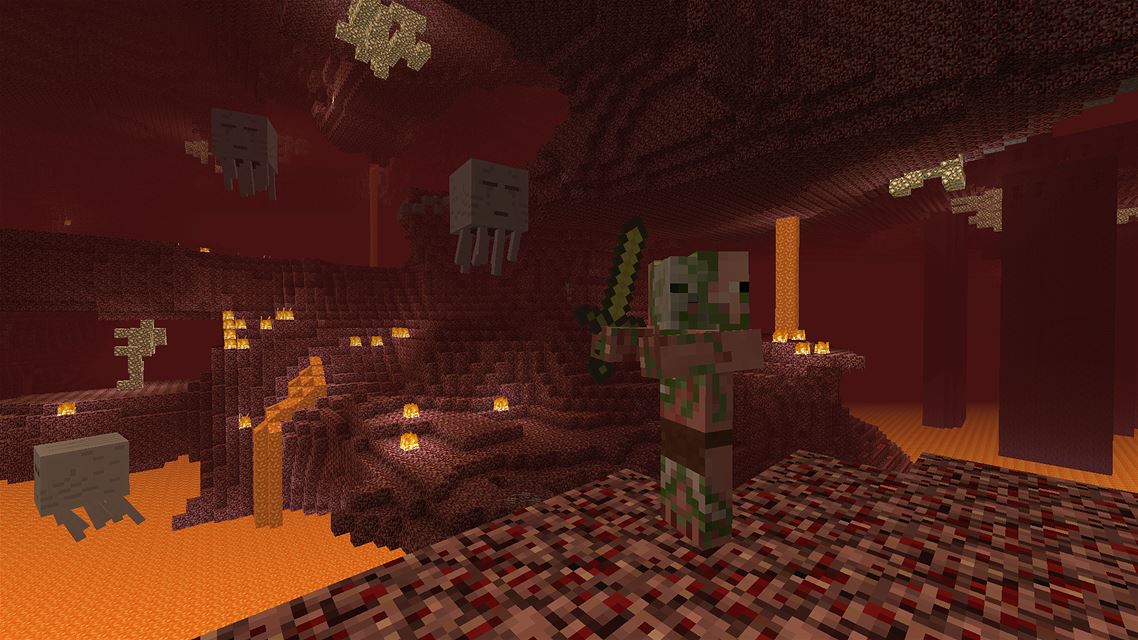 'Minecraft' is perhaps best played with a partner, especially when you have a common goal in mind, or are willing to separate work roles ("I'll be the miner, you be the architect," etc.). Multiplayer sessions of up to eight players are possible. Sadly, the interface for finding and joining other players is a bit clumsy. You are only able to join your friends and their friends - there is no matchmaking.

My only other complaint regarding the gameplay is the lack of meatier new features. Larger worlds and a new draw distance is great, but this is the same 'Minecraft' that everyone has been playing for years now. Fortunately, the switch to the One is easier for those who have purchased the 360 version, as they need only pay $5 to upgrade. 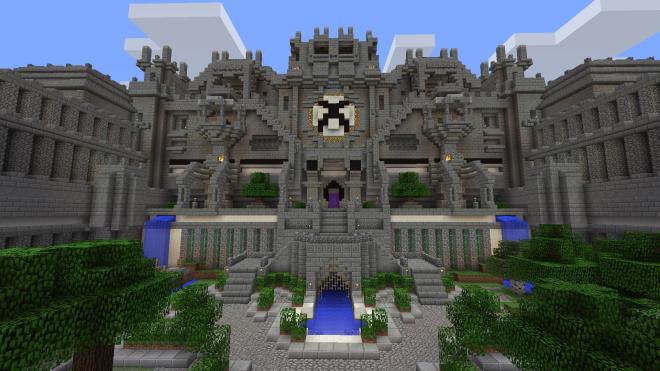 For 360 fans, 'Minecraft' looks better than ever on the One, although it should be noted that, by design, the game’s visuals aren’t exactly groundbreaking. Just about everything is a square block and there are few curves, even in things that should be curved (such as a human head or the Sun). A key visual upgrade for the Xbox One version is the very long draw distance. Not only is this especially useful when planning projects above ground or searching for villages, but it makes the sense of a vast 3D world more enjoyable, when more can be taken in a single glance, like say, after scaling a mountain or tunneling through a cliff.

The video is crisp and colorful, and the developers have used the confines of the pixel and the square block to create diverse, creative effects, and environments. Perhaps due to the low-maintenance nature of the engine, there are no glitches or stutters, even with the increased world sizes. 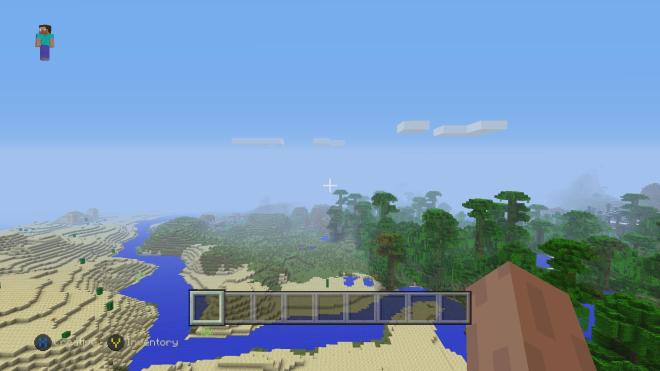 The music of 'Minecraft' changes depending on where the player goes, and much of the time it has a peaceful, Zen-like quality that is conducive to the bouts of creativity that the game inspires. When deep underground or in the Nether it adopts a more unsettling timbre that is appropriate for those environments. Caves in particular emanate unnerving ambient noises like creaking and soft footsteps, which is perfect for enhancing the feelings of tension and danger present there.

Creature sound effects, like the visuals and gameplay, are simple and effective. There’s nothing quite like being deep in a mineshaft, busy looking for a nice vein of diamond ore, and hearing a zombie groan from an unknown location.

Replayability is where you get your money’s worth with 'Minecraft'. Indeed, the worlds can get so large that "restarting" may be as simple as walking in one direction for a few minutes. You can create different worlds with different objectives and parameters - perhaps one on super hardcore difficulty, another on Peaceful, another for your friends to help, etc. There are several options and permutations you can apply to new worlds, from the size of the world to how other players can interact with it and more. If you have played the 360 version, you can port over all of your worlds to enjoy on the One. 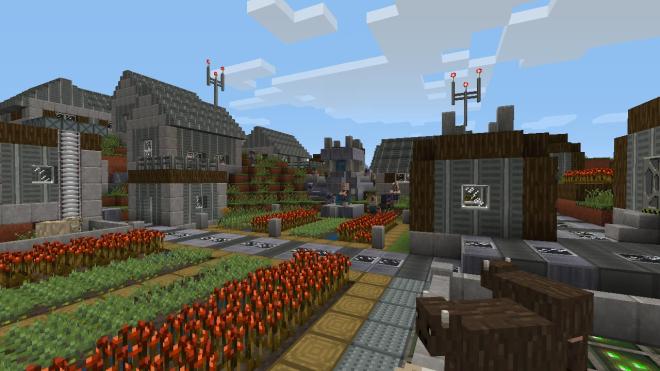