The Game Itself
2 Stars
The Video: Sizing Up the Picture
3.5 Stars
The Audio: Rating the Sound
3 Stars
Replay Factor
2 Stars
Bottom Line
Skip It

PS3 disc version reviewed. Some portions of this review appear in our review of the Xbox One version.

From the early days where a 'a winner is you' on the NES 'Pro Wrestling' to the breakout success of the N64's 'WCW/nWo Revenge' the wrestling game has been a genre for nearly two decades now that gets fans of the sport in a buzz each year. For quite some time, Yukes had the monopoly on the WWE license with their long running 'Smackdown vs. Raw' series, until 2K Sports took over with the buzz worthy 'WWE 13.' For all the complaints of the Yukes entries growing stales, 2K managed to counter with an enhanced game engine and more importantly, a story mode built on nostalgia: for 'WWE 13' a great recreation of the Attitude Era highlights and for last year's 'WWE 14' a trip through WrestleMania's greatest moments. With so much going in its favor, the revitalized WWE franchise enters what is likely its last entry on the PS3 and X360 with 'WWE 15'.

The next-gen versions received a lot of hype when first introduced, but wound up delayed while the 360 and PS3 versions shipped on time. Still, with a 2K Showcase mode and exclusive Who Got NXT mode, coupled with two years of successful offerings, the last gen offering should at least be worth checking out for a month, right?

Those familiar with 'WWE 2K13' and 'WWE 2K14' are going to feel right at home on the basic control level with 'WWE 2K15.' Very little in terms of core gameplay feels unchanged, with the combination of analog control movement and button combinations allowing players to unleash a multitude of punishing moves upon their opponent. Gameplay feels roughly as fluid as previous installments, although I couldn't shake a nagging feeling that by and large, the variety of moves offered in this outing is noticeably smaller. It should come as no surprise then, given the focus on the next-gen systems, the physics engine here still has its quirks, and the occasional reality bending glitch does occur, whether it be character models clipping through each other or momentary instances of the environment sticking. If you've come to have a grand time making dream match-ups and carrying them out, then 'WWE 2K15' has you covered. 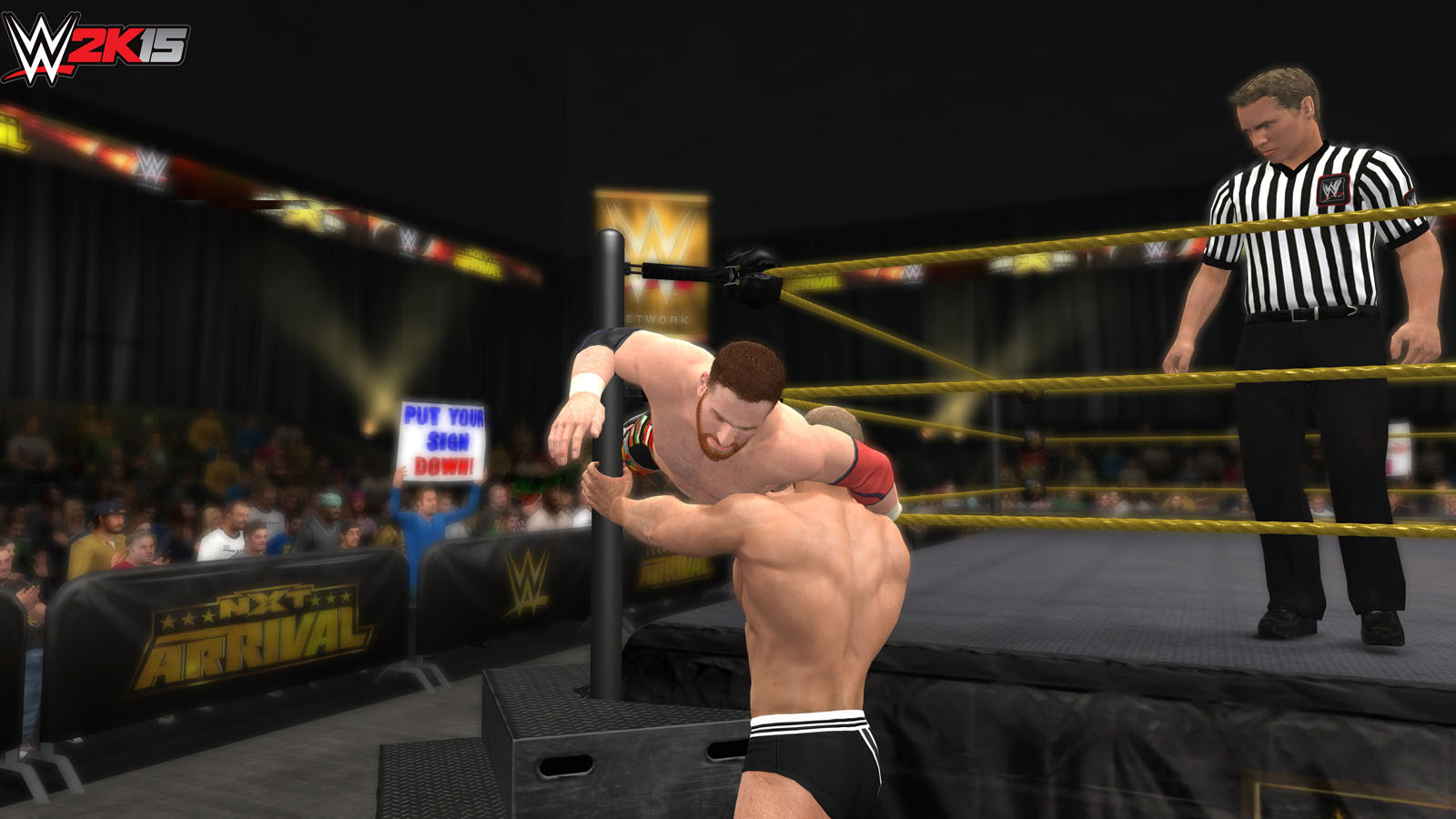 Should you make the jump over to this year's story mode, 2K Showcase, you'll quickly find a game crumbling at the seams. Gone are the hearty trips down yesteryear; in its place are two paltry offerings of John Cena and CM Punk's 2011 feud and an early 2000s era feud between Triple H and Shawn Michaels. The overall number of matches in each Showcase is noteworthy, but it quickly becomes a slog given the so-so production value. There's never a sense of urgency or importance to the matches presented and the historical context is paltry at best; only by knowing the significance of key matches from actually watching them unfold, did I find myself invested. Likewise if you don't care for Cena, Punk, HHH, or HBK, than 2K Showcase is going to leave you feeling very cold, as it lacks the breadth of Road to Wrestlemania or the Attitude Era from year's past.

Who Got NXT should be this last gen offering's saving grace, but its even more shoddily produced than 2K Showcase and boils down to little more than pick one of five NXT wrestlers, have a few matches and then face John Cena. For NXT fans, it's a huge deal seeing these guys featured prominently when in reality they are still largely unknown to the WWE fan base at large. At the end of the day, the only reason to even power through Who Got NXT or 2K Showcase at all, is once again because all the game's unlockables, including extra wrestlers, arenas, and attires stem solely from making it from start to finish. If you're truly opposed to completing such mediocrity, 2K offers a two-dollar piece of DLC that unlocks everything from the start. 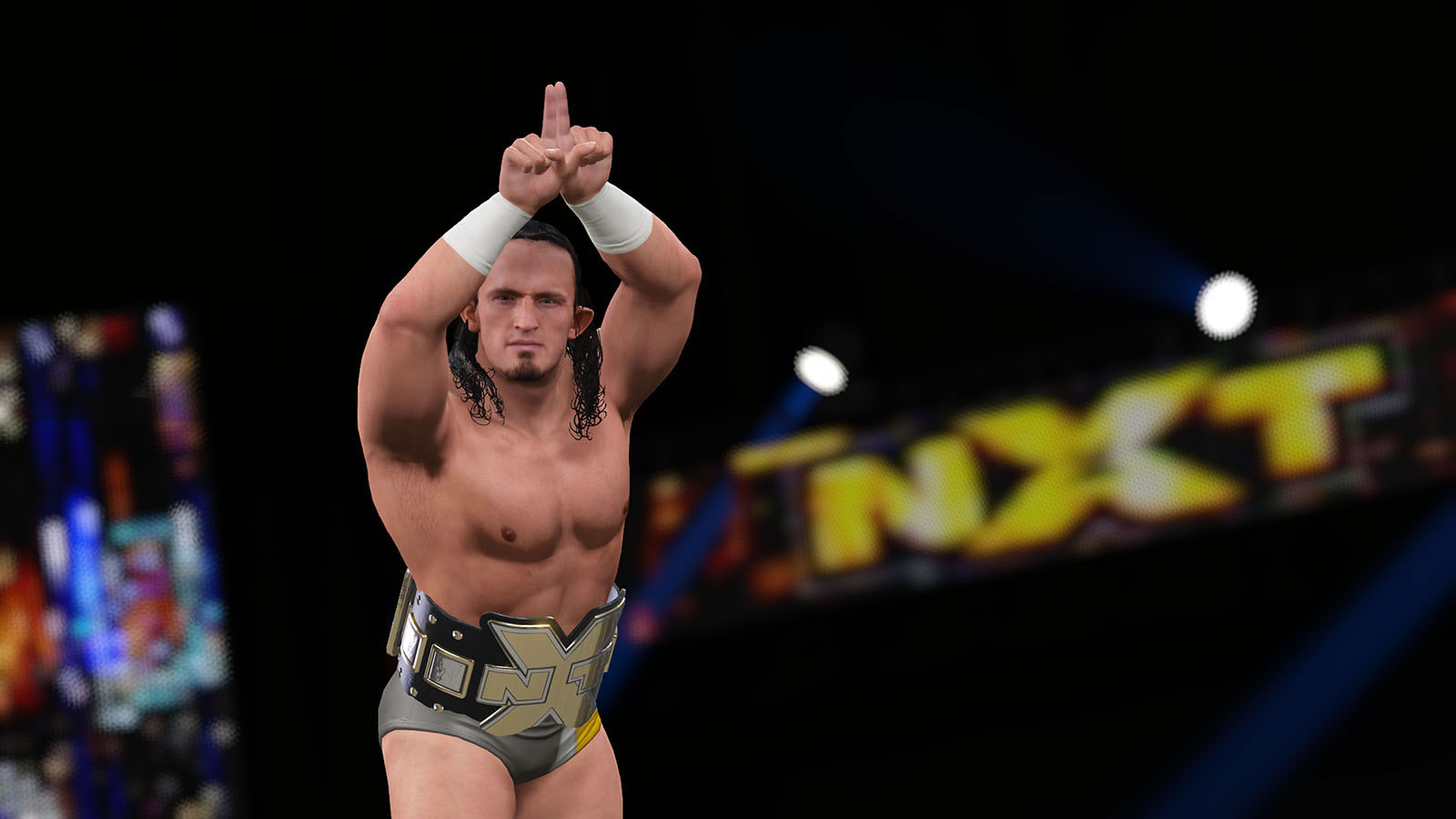 Adding insult to injury is the stripped down creation mode, which is capped at 25 create-a-wrestlers. Further complicating matters is the baffling omission of not only the create-a-finisher which is a key element in finishing off the move set of any CAW, but custom soundtracks and entrances are also omitted. Any way you cut it, 'WWE 2K15' is not just a pale shadow of what the PS4 and Xbox One versions will hopefully be, it fails to even hold ground against entries from the last five years. Nearly everything that brings in the hardcore WWE fan is gone and those unfortunate enough to give this offering a try are going to be left with a bad taste in their mouth; it is sheer ill will that I'm not certain a stellar current gen product could rectify.

Visually, 'WWE 2K15' is as bland and dull as its 2K Showcase, although not as anemic as its cannibalized creation modes. Character models do show some improvements from last year, but it's not nearly enough to warrant a purchase for a game that isn't just a roster update from its predecessor, but in fact a major step backward as a complete product. The stripped down production value honestly makes the game look far cheaper than it actually is.

On the plus side the game runs at a consistently smooth rate and animations are the best I've seen to date in a wrestling game, although there is still occasional stiffness from the actual character models. Hair and clothing texture effects do see a slight uptick in quality and do provide some of the game's only moments of 'wow.' 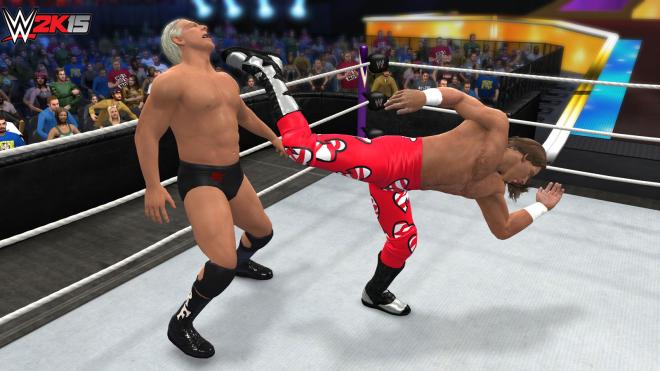 Audio wise, 'WWE 2K15' is all over the place. I've always had personal issues with sound mixes in wrestling games and this is no exception. General exhibition mode matches features a finely balanced aural experience, from entrances themes, to crowd noise and commentary, it's a great replication of a WWE event. The 2K Showcase on the other hand, seems like it draws from archival footage at times and the newly recorded commentary from Michael Cole and Jerry Lawler feels disjointed and separated from the action. Speak of commentary, another feather in the cap for '2K15' is commentary that is far less repetitive than year's prior, but after turning this necessary but inconsistent feature out for years, you might not notice the more natural delivery and production value. As previously mentioned, one of the key sound features of year's prior, custom soundtracks, has been removed, and frankly the generic custom music options don't even begin to come close to having free reign.

While the 2K Showcase and Who Got NXT will get a decent number of hours of gameplay out of most players; those not content with making fantasy matches against the computer will want to venture online. This year's offering is no more refined than years' past and there are still issues with lag; bottom line, it's no substitute for local co-op or competitive play and without the ability to create custom storylines, carrying out exhibition matches on a game that doesn't feel quite as robust as it should or past entries have been, is going to wear thin, fast.

As in years prior, the DLC offerings promise new characters to bring into the game and insultingly, more 2K Showcase offerings. In all, three new 2K Showcase entries are slated for release as DLC, including one focused on the career of the Ultimate Warrior. With such an anemic offering to begin with, foisting a half-baked last-gen version on unsuspecting fans and then asking for another $25 to get what really should have been in the game from the get go, is just dirty pool. 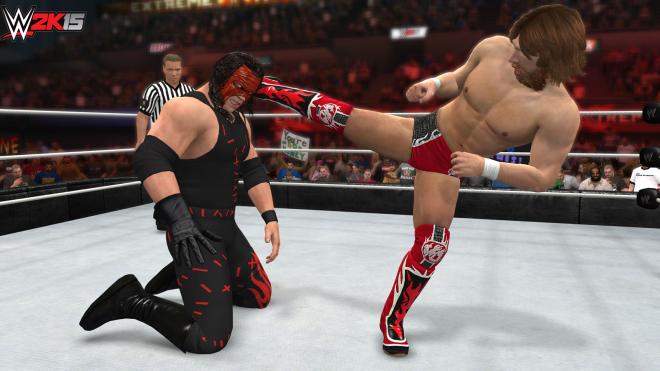 As much as it pains me to say it, 2K Sports is the Ric Flair to the gamer's Sting; we expected at least what we got last year, not a complete betrayal. Not even to the most loyal and devoted WWE fan could I recommend this incarnation of 'WWE 2K15.' It's a lower quality, stripped down, knock off of 'WWE 13' and 'WWE 2K14.' If you're still stuck in the last generation of gaming, stick with what you already have; the roster changes aren't worth a $60 price tag, especially when you're copy of '2K14' already has a great creation suite. Let us all hope though, that 2K delivers the goods with its PS4 and Xbox One offerings, otherwise, the future of pro-wrestling gaming is very bleak.