The Game Itself
2 Stars
The Video: Sizing Up the Picture
2.5 Stars
The Audio: Rating the Sound
1 Stars
Replay Factor
1 Stars
Bottom Line
Skip It

European digital PS Vita version reviewed. 'The Muppets Movie Adventures' has not been released in the North America.

I love me some Muppets. The 1977 French pressing of the 'Mah Na Mah Na' 7" vinyl single stands proud in my record collection, their excellent 1992 version of the classic Christmas Carol story gets spun every Christmas in my family and I thoroughly enjoyed the 2011 reboot starring Jason Segel and Amy Adams. Shivering with anticipation, I entered 'The Muppets: Movie Adventures' for the PlayStation Vita. Could it be everything and more for the seasoned Muppets fan, or a terrible bore for all audiences?

'The Muppets: Movie Adventures' is a side-scrolling adventure reminiscent of 'Super Mario World' or 'Donkey Kong Country' for the Super Nintendo Entertainment System. The game holds no surprises in store for platform veterans, because all the genre's tropes and hallmarks make an appearance: jumping (and sometimes double jumping), gathering spoils, amassing collectibles and defeating enemies. For younger children or newcomers alike, this may offer some small thrills, but even then, the title never scales the heights of the best platformers.

Made up of just five levels, the game can easily be finished in under three hours. After one playthrough, the game offers a power-up that is needed to find everything. Each stage has 50 stars, 5 movie reels and one golden ticket to collect. Replaying is pretty pointless, though, because the rewards are pitiful: sixteen stills that aren't even fullscreen. Each level is presented as a fictional movie, in which a Muppet must battle the odds and the eventual enemy. For the curious, this amounts to Kermit in 'Greenlegs: The Swashbuckling Pirate Frog', Miss Piggy in 'The Wizard of the Green Earth', Animal in 'The Good, The Bad and The Animal', Gonzo in 'The Night of the Walking Veggies' and Kermit again in 'The Koozebane Menace'. You can't continue to the next movie until the previous one is completed. The Muppets themselves are self-aware actors. Falling off a cliff doesn't result in a game over screen, but brings up a disgruntled director who repeats one of just three phrases: "Cut! That's a great shot for the out-takes reel, but not for the movie! Let's try it again!", "Cut! Nice try, but let's do this scene again!" and "Cut! We're just not capturing the magic here. You really need to "get into character". Take a rest and we'll go again!". Over and over and over again. It gets old very fast.

Miss Piggy's movie is the most accomplished, because it's reminiscent of 'Puppeteer' (PS3) or even 'Pandemonium' for the N-Gage, if you remember that console. A lot of doors and different paths make it easy to get lost, but it's challenging and well-balanced. A mini-game where runes have to be matched with touch controls also spices up the activities. Other than that, the Vita's front and back touchpad are used mainly for gimmicks: turning a wheel, tapping TNT barrels to make theme explode etcetera. 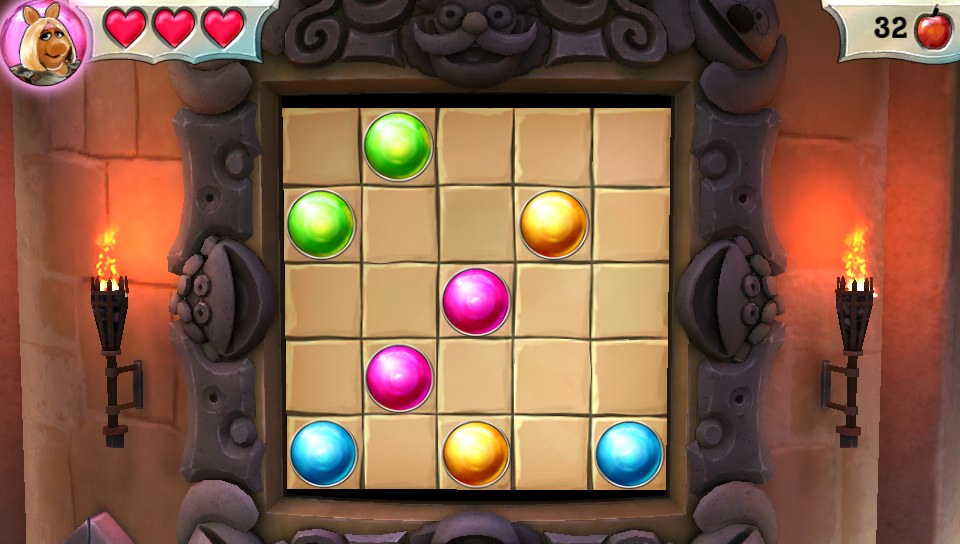 There are a few fun touches: henchmen are called 'henchrats', Animal can step on rakes (and rakes are always hilarious, Sideshow Bob-style) and the disclaimer that "no Muppets were harmed" during the credits. Other than that, the game excels in frustrating and questionable game design choices. Loading times, for one. Making a wrong level selection results in punishment by not being able to quit right away. Screen after screen needs to be clicked, and more loading ahoy. And then there are the arbitrary rules. Just before entering the finale, the game warns us that "Kermit's booster boots are damaged, so you'll have to defeat the boss without them". Oh really? Even though the boots weren't damaged the second before we entered the lair where the boss lurks? Animal would wreck the game then and there in utter rage. Statler and Waldorf would not approve. 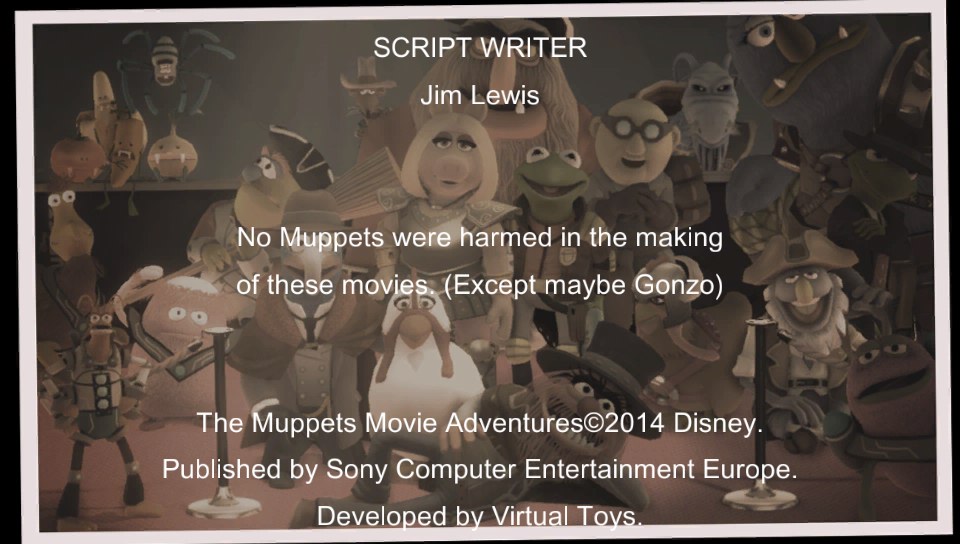 As a platformer for young children, 'The Muppets: Movie Adventures' isn't half-bad. It may even warm them up for the genre's real killers. As a Muppets game, however, it's shamefully underwhelming. 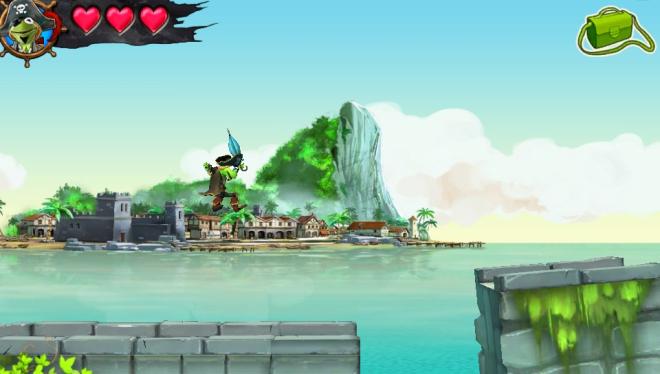 'The Muppets: Movie Adventures' features colourful backgrounds and backdrops, but the character models are a mixed bag. While definitely recognizable as our favourite Muppets, the sometimes blocky and unpolished design leaves a lot to be desired and improved. Cut scenes are always static. What an utter shame to not animate the zany and wacky felt heroes. Even jittery or stop motion-esque would have sufficed. Just before the credits roll, we get exactly three seconds of actual moving Muppets. 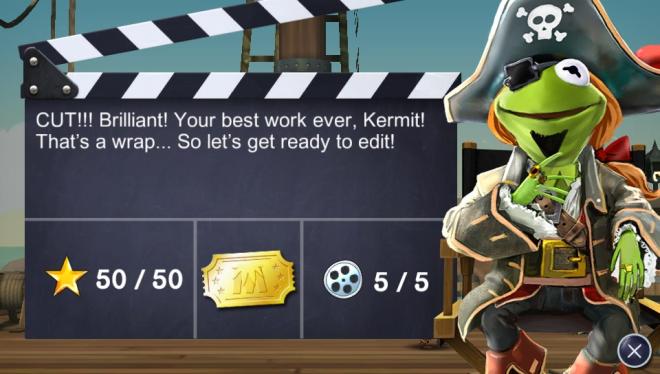 The cut scenes and the director's three snarky comments are fully narrated, but none of the Muppets talk. I'll give you a moment to let that thought sink in. None of the Muppets talk. These characters have had legendary voice actors provide them with definitive voices that are ingrained in our brain and our collective pop culture memory. Every American knows at least some French thanks to Miss Piggy, and some faux Swedish thanks to the Swedish Chef. No character speech in 'The Muppets: Movie Adventures' may be its biggest crime. Background music is perfunctory and basic, but passable.

Every level offers a replay, to catch all stars, reels, and golden movie tickets. The rewards are less than stunning. Sixteen stills that aren't even fullscreen. Don't bother. 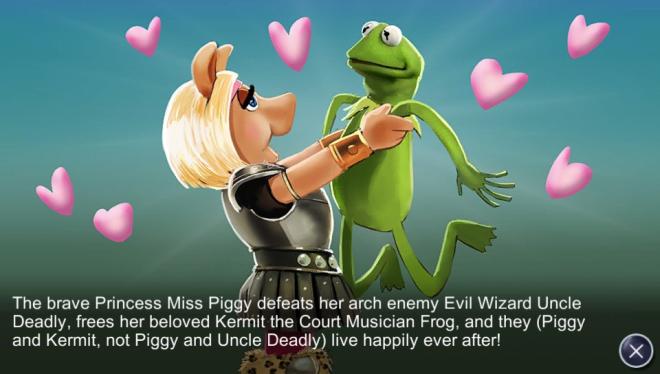 On paper, a self-aware, self-referential, meta Muppets game about the felt puppets acting in the movies sounds like a charming game. In reality, it's a half-baked effort featuring basic platforming thrills, a few chuckleworthy touches, but no actual Muppet voices. What a crime against good taste in videogames. While not a total disaster (young children may find some enjoyment in the title, and the Muppet theme alone is enough to warrant a small smile on a gamer's face), 'The Muppets: Movie Adventures' could have been so much more. And should have been. A pretty meh nah meh na affair.