The Game Itself
2.5 Stars
The Video: Sizing Up the Picture
2.5 Stars
The Audio: Rating the Sound
3 Stars
Replay Factor
3 Stars
Bottom Line
Skip It

Back when Pokemon was gaining popularity through its video games and other forms of media, many other companies tried to capitalize on Game Freak's success with their monster-themed attempts. Probably the most successful of these, and Pokemon's biggest rival, is the Digimon series. Starring a group of kids that get sucked into a battle to save the Digital World (and by extension their own), the anime and resulting video games offered enough familiarity to draw fans of Pokemon, while being unique enough to keep them hooked.

While Digimon may have started out as a Tamagotchi-like toy, the anime and game series are what really put Digimon on the map, and both are still ongoing today. The latest videogame offering for the series is 'Digimon All-Star Rumble', an arena-style fighting game from Bandai Namco. 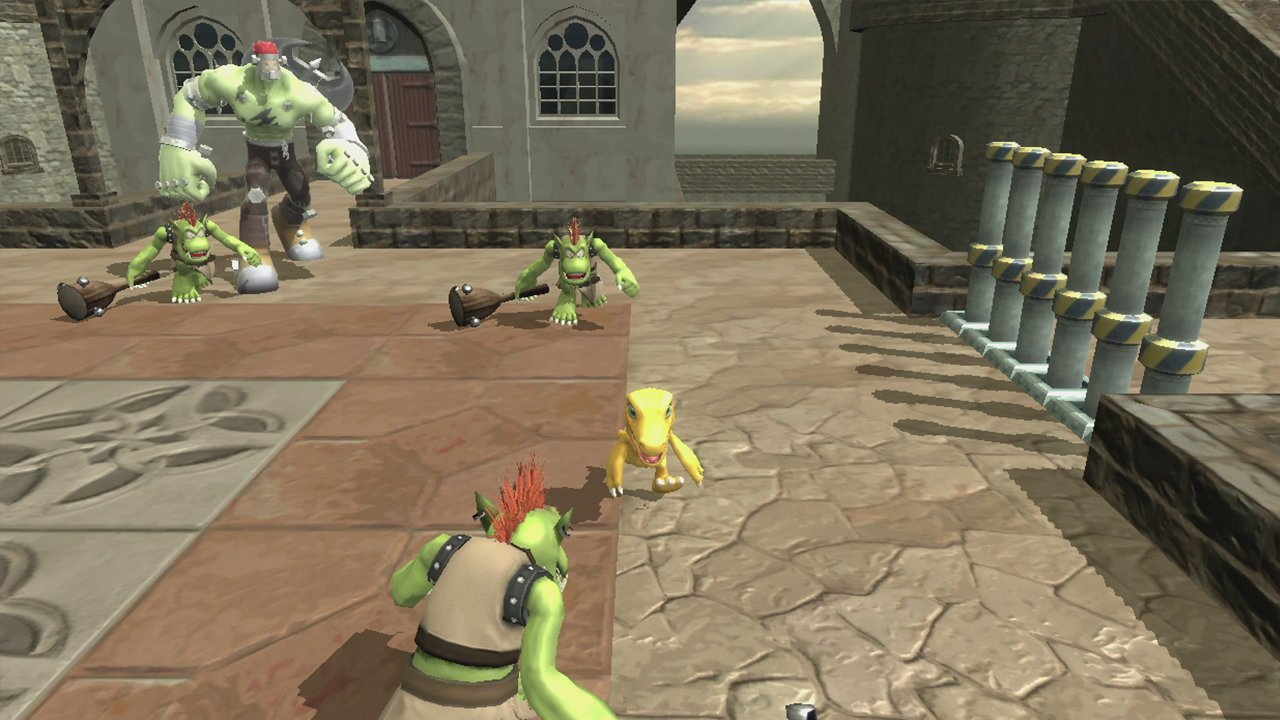 It's a very cut and dry story for a fighting game, but it works well enough to push players through the game's main mode, the Story Mode. In Story Mode, players transverse a number of areas, and fight random enemies much like an Action RPG. These little segments are a nice touch, but overall they don't add much to the game. In earlier levels, enemies are simply one-hit kills made as a minor roadblock in a linear area; later, there are mobs designed to use cheap attacks to quickly whittle down HP.

Once through these little areas, a real battle with a rival Digimon will commence. The controls for the battle are the same as on the field: Your fighter has a strong and weak melee attack, an SP-using ranged move, and the ability to jump. Combos are extremely simplistic, which is expected as the game caters to a younger audience, so most rounds result in either random button mashing or just sticking to the weak physical attack combo.

When a Digimon gives or takes enough damage, it can then Digivolve. When a Digimon Digivolves to its next form, the Digimon becomes significantly larger, and its attacks are far more devastating. Digivolving is one of the bigger strategic points to 'All-Star Rumble', as being caught against a Digivolved form without being able to Digivolve yourself can lead to a quick defeat. 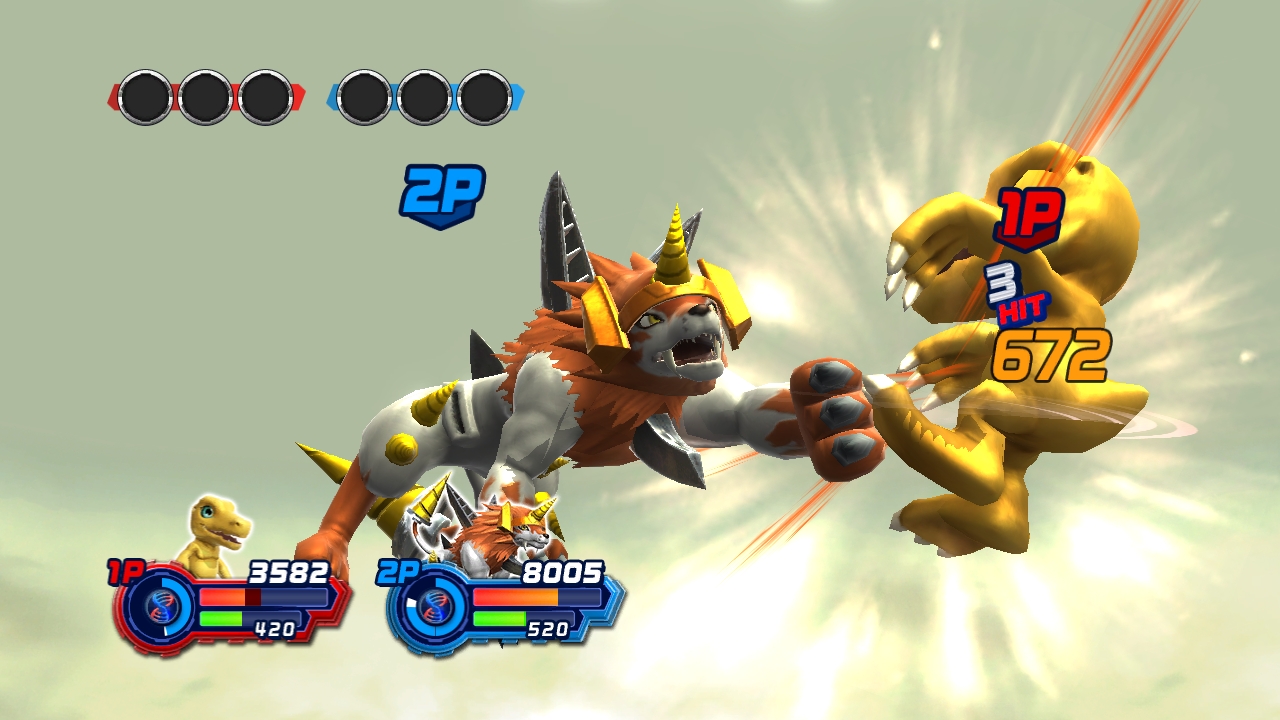 Unfortunately, the balance just isn't there to make battles exciting. Battles in 'All-Star Battle' feel remarkably slow, and this isn't helped at all by the large battlefields. It is clear that the arenas are built for the Digivolved Digimon to duke it out, but since the Digimon are typically in their smaller base forms, the arenas feel too big for their sluggish pace. Also, overall balance feels a bit off, and cheap attacks are easily exploited by the computer and player alike, making battles either frustrating or boring.

This feels like something that could be rectified by the numerous types of battles available, but the different modes do little to change up the gameplay. Among the many modes, there are stock battles, survival battles, where the participant has only one life, a mode where a time bomb is strapped to the Digimon, blowing up after a set amount of time, and more. However, few of these modes offer any chance to make new and exciting strategies save for a few, and even then the new ways the modes change up the fight are rather boring.

To give an example, at one point in the Story Mode I was set in a Capture the Flag battle, the purpose of the battle being to keep the flag for as long as possible to rack up points. At the beginning of the battle I simply grabbed the flag first and proceeded to run laps around the arena, keeping away from my opponent. Due to the opponent's speed and rather basic AI patterns (despite being late in the mode), I was never caught during the three minute duration of the battle. This is supposed to be stopped by the fact that those with the flag can earn more points by damaging opponents, but in a 1-on-1 fight, what point is there to take the risk? Additionally, the particular Digimon I was fighting had a particularly bad ranged SP skill, making it easy to dodge and not take damage.

While that might make battles easy, having an AI that's so easy to exploit does not make for a fun time, nor is it fun when you get stunlocked out of most of your HP because an opponent managed to keep grabbing you in a combo during that moment between recovering from a combo and the animation of your Digimon's attack.

There are also Digicards. Two Digicards can be equipped to Digimon, and they have various effects depending on what kind of card they are. Certain cards do extra damage, others heal HP or SP, and some don't even have an effect. How often they activate depends on the percentage shown at the top of the card, so there's a lot of random chance involving their activation. For the most part they are an interesting feature, but one that ends up being a minor mechanic at best. 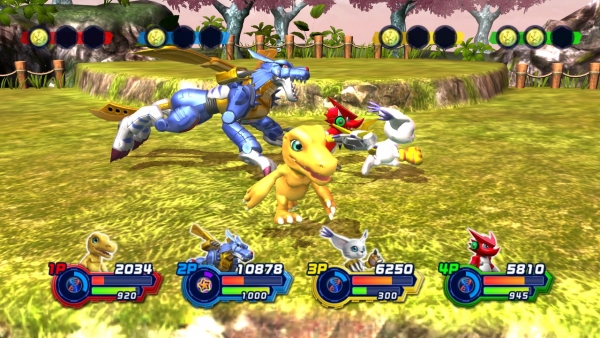 Beyond the Story Mode, 'All-Star Rumble' doesn’t offer much. There is the Battle Mode, where up to four people can locally battle with any of the game's rule sets, though the lack of an online mode might ruin the fun for some. Other than that, there is a standard training mode, and the ability to look at your Digicard collection. There is no Arcade Mode for those that might want to skip the story, nor any unique modes that might take advantage of the lore of Digimon, which is a bit disappointing. 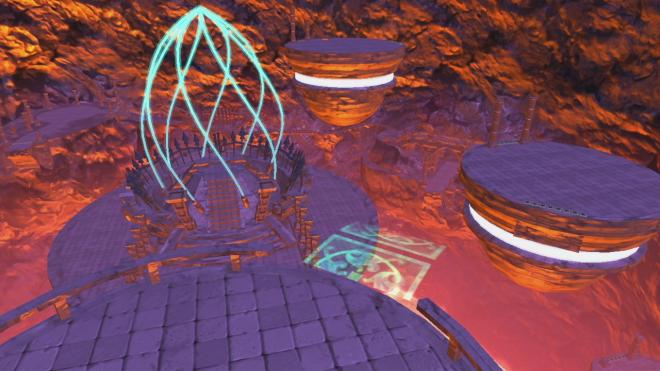 At best, 'Digimon: All-Star Rumble's' graphics are simply average. The areas of Story Mode and the arenas themselves are colorful enough, but aside from Native Forest, they feel a little un-inspired design wise. The Digimon themselves look as they should, being accurate representations from their respective anime series, but at the same time the models don't feel as though they take advantage of the technology it's on. Basically, it looks as those the fighters could have been ripped out of a late PS2 title.

All of the Digimon's Digivolutions look a bit better, though that's likely due to the original designs being a bit more involved than the monsters' base forms. Special moves appear somewhat flashy, making them stand out more than the average combos, as well. But really, playing 'All-Star Rumble' on the big screen is rather underwhelming, and the visuals consistently reflect an unambitious standard. 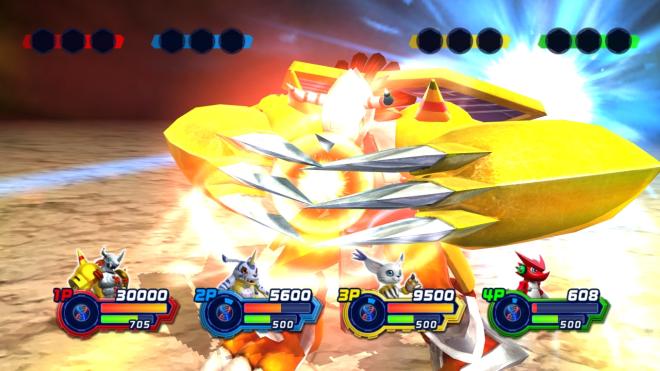 Like the graphics, the sound of 'All-Star Rumble' is serviceable, but ultimately average. The music that plays in the background works well enough to set the mood, but other than a few decent tracks the background music is just that—in the background, and largely ignored.

The game features voices for the playable Digimon, and seem to fit the monsters well enough. I can't tell if they are the same voice actors from the Digimon anime or not, however.

Finally, the sound effects are adequate for a fighting game. Digimon will shout our names of certain attacks and do all the typical grunting and yelling that one expects when creatures are duking it out. Some of the effects can grate on the nerves a bit, particularly when Digimon use their SP related attacks over and over, but otherwise there's nothing wrong in this department. 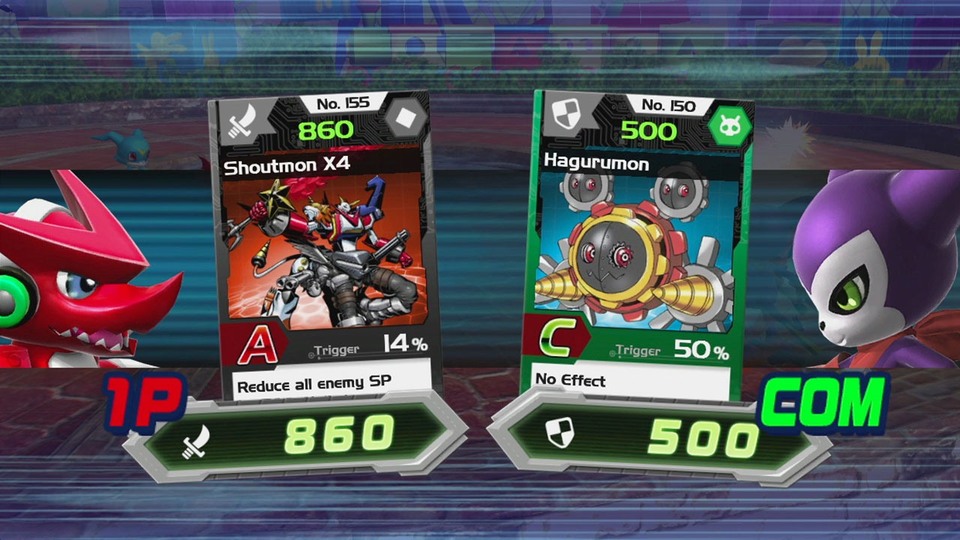 'All-Star Rumble' does provide a more to do after the first run-through of Story Mode is done. For starters, not all of the Digimon can be unlocked after a single run of the story, so players looking to have the full cast available to them will have to work through the story a couple times and with different characters.

After that, the main goal is to fill out the Digicard collection. There are 200 different cards to collect, and the only ways to grab more are to buy them with Bits or find them in chests in Story Mode. It can unfortunately feel grind-y after a while, so only those that enjoy the game are going to want to go through the effort of collecting the cards in the first place. 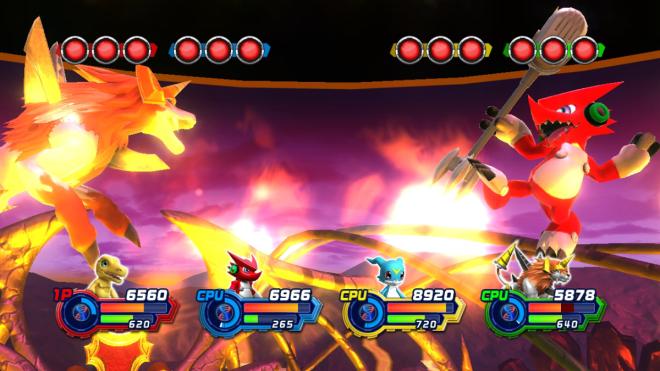 'Digimon: All-Star Rumble' is clearly aimed at a younger audience, but at the same time, that audience can find a much more fulfilling experience. Combat is generally slow and easily exploited, and the ramp up in difficulty in the final couple of stages dissipates any fun that could be had. Once all the Digimon are unlocked, all that's left is to collect Digicards and play with friends, but the former isn't very rewarding and the latter is not likely to be done, with a plethora of better party games releasing this month.

Given all this, it's not really worth picking up 'All-Star Rumble', even for fans of the series. There's just too little to justify a purchase, and what is there is only marginally fun at best, and downright frustrating at worst.