The Game Itself
3.5 Stars
The Video: Sizing Up the Picture
3.5 Stars
The Audio: Rating the Sound
3.5 Stars
Replay Factor
3 Stars
Bottom Line
Worth a Look

Lara Croft and the Temple of Osiris

'Lara Croft', star of the venerable 'Tomb Raider' adventure games, has her hands full with not one but two franchises to keep up with. 'Tomb Raider' continues as usual after the reboot from 2013, but there is also a second series, aptly titled 'Lara Croft.' This is a more arcade-ish experience, with local and co-op multiplayer, a focus on points, scoring, and speed, and some puzzles, platforming, and loot thrown in for good measure. It is a sequel to 2010’s 'Lara Croft and the Guardian of Light'. This particular release, 'Lara Croft and the Temple of Osiris', takes her into Egypt to raid the pyramid tombs of hibernating gods.

Unlike the AAA, big-budget, blockbuster 'Tomb Raider' franchise that Lara is best known for, the 'Lara Croft' series is smaller in production value and scope. It’s not an over-the-shoulder third-person action-adventure with a big expensive engine. It’s twin-stick shooter with an isometric, top-down camera - the general look and controls are something like a lovechild of 'Diablo' and shooter-style arcade games. It’s a lighter, younger sibling of the family. The darker, more violent trappings of the recent reboot are nowhere to be found. In 'Temple of Osiris', Lara is a simple archaeologist, trying to steal ancient treasures but with a penchant for getting herself caught up in supernatural plots. In this game, the Egyptian god Set has escaped from his afterlife prison to take revenge on his old nemesis Osiris and the latter’s family. 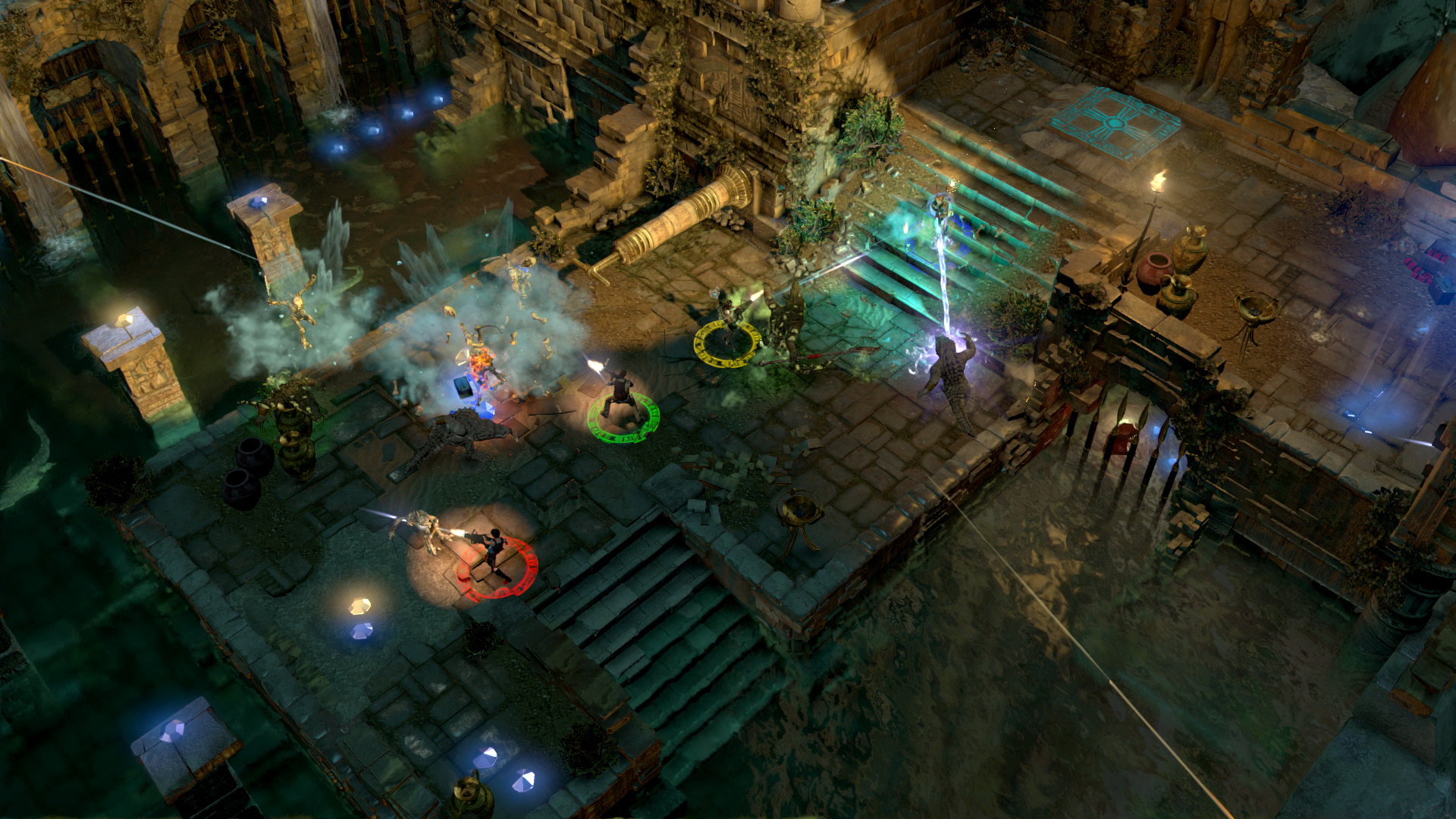 Along with Lara, three other players can join in at basically any time. They can take the role of Carter, a brash archaeologist, Isis, erstwhile wife of Osiris, and Horus, son of Osiris and Isis. Each one has different abilities that can be used to fight enemies and solve environmental puzzles. In single player, Lara has access to most abilities directly and can solve all puzzles by herself. In co-op, puzzles change dynamically so that multiple players must contribute. Some of the puzzles are simple, but others had me scratching my head for a bit, and I was glad to have another player so we could try to work things out, or at least blame each other when we couldn’t make sense of the puzzle. The puzzles can be engaging, such as a room where one player has to direct light into the field while the other player carefully rotates mirrors to reflect the light into targets. Others were simple enough as to hardly be called puzzles, or abstract enough to have us staring at the screen for minutes on end. In our defense, the lack of a co-op tutorial didn’t help matters. 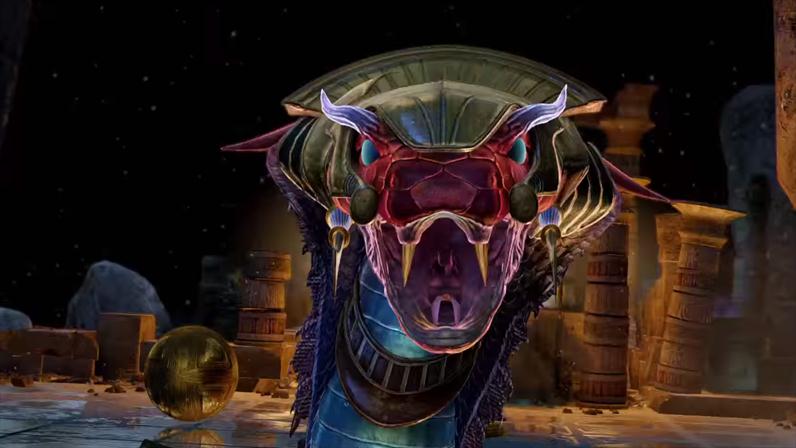 The storyline is pretty cheesy, and the dialogue reminded me of a kids’ movie or a campy radio serial. Set has a habit of chuckling villainously and making booming, grandiose threats. Isis and Horus feign shock and anger whenever Osiris is insulted or threatened. Carter doesn’t say anything remotely cool and is kind of an unscrupulous graverobber. Mercifully, the cutscenes are short and the gameplay is far more entertaining. In between puzzles are fights with scarabs, anthropomorphic crocodiles, undead, and other minions of Set. Lara and her ilk can collect different firearms to fight against them, and there are lots of health and ammo pickups and other old-fashioned arcade goodies. 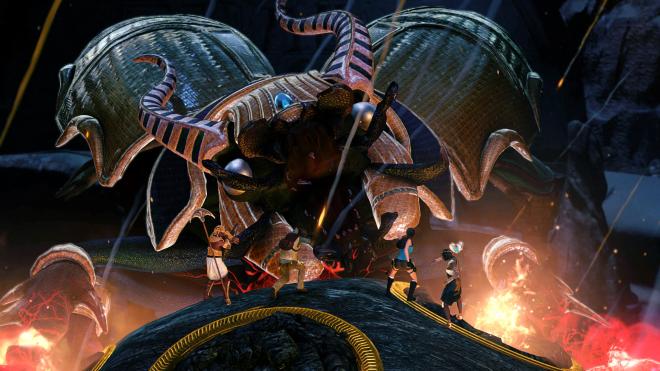 'Temple of Osiris' is not bad looking for a game without the huge budget of a AAA title. Textures and lighting are better than average, with decent-looking smoke, fog, and water. The character models themselves are detailed, but difficult to make out because the camera often zooms so far away from the action. There is no split-screen, so characters can only move so far away from one another. The camera can often be a nuisance, and it has no manual controls. 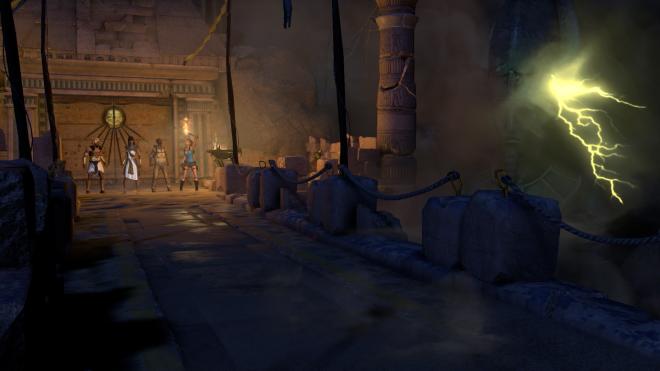 The soundtrack is spirited and boisterous, especially during boss fights, which are often not boss fights so much as boss puzzles. The sound has an appropriate adventurous zeal, but doesn’t go overboard. The voice acting is not quite as good. Only Lara’s actress, Keeley Hawes (who used to be the only Lara Croft, before Camilla Luddington was cast for 'Tomb Raider'), sounds like a pro. The others often sound like they’re either phoning it in or hamming it up, which wouldn’t be so bad if the game didn’t take itself quite so seriously.

Each tomb has a dozen optional objectives that provide bonus rewards when completed. Collected gems can be used to buy loot at treasure chests, although a lot of the loot is bland, expensive, and random, making a lot of purchases disappointing. Because friendly fire is on during explosions, and enemies and loot are limited in each level, there is also a competitive element in co-op. Being a devious gaming frenemy, I fiendishly conspired to burglarize my co-op partner of gems at every opportunity. This atmosphere of competition can add to the entertainment value of the tombs, as there are only so many and replaying them can get tiresome. 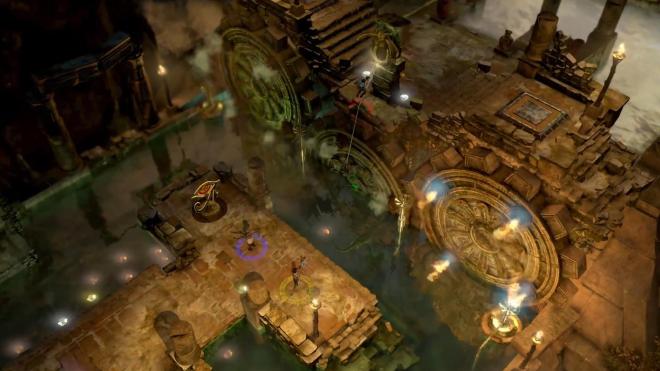 'Lara Croft and the Temple of Osiris' is radically different from 'Tomb Raider', but this is not necessarily a bad thing. It is also not radically different from its predecessor, and I wish it would have had a bit more ambition with its loot system and platforming. The puzzles are more fun than annoying, and in this regard co-op is implemented well. A few other relatively minor issues chip away at it, but overall it is not a bad little arcade game.