The Game Itself
5 Stars
The Video: Sizing Up the Picture
4 Stars
The Audio: Rating the Sound
4.5 Stars
Replay Factor
5 Stars
Bottom Line
Must Own

Believe it or not, there was a time when Japanese developers were extremely bullish on the prospects of the PS4. It wasn't until the console was released in Japan (and after success abroad) that many developers, including NIS, decided that the new platform would have the install base needed to justify their big(gest) projects.

One such game that made the fateful developmental jump, was 'Disgaea 5: Alliance Of Vengeance.' Not only is 'Disgaea 5' a new mainline entry in a cultishly popular series, but also, NIS has been promising to take everything that fans love, from the battle system to the humor, and bring it to crazy new heights. Indeed, this is the most ambitious NIS title in years, and one that has been hitched to the PS4 in a way that genre fans have only been able to dream of.

I'll be honest with everyone—I did not have high hopes for 'Disgaea 5'. When I played the Vita version of 'Disgaea 4', I was quite frankly blown away by how fresh it felt, with new twists on old mechanics. However, after 'Disgaea D2', which was overall a disappointment, I was a bit wary that the normal 'Disgaea' team was handling 'Disgaea 5'. Mix that in with a lack of hype, poor sales in Japan, and a seemingly boring story, and it's a recipe for disaster.

So when I say that 'Disgaea 5: Alliance of Vengeance' is almost undoubtedly going to be my favorite game to come out this year, that really means a lot. 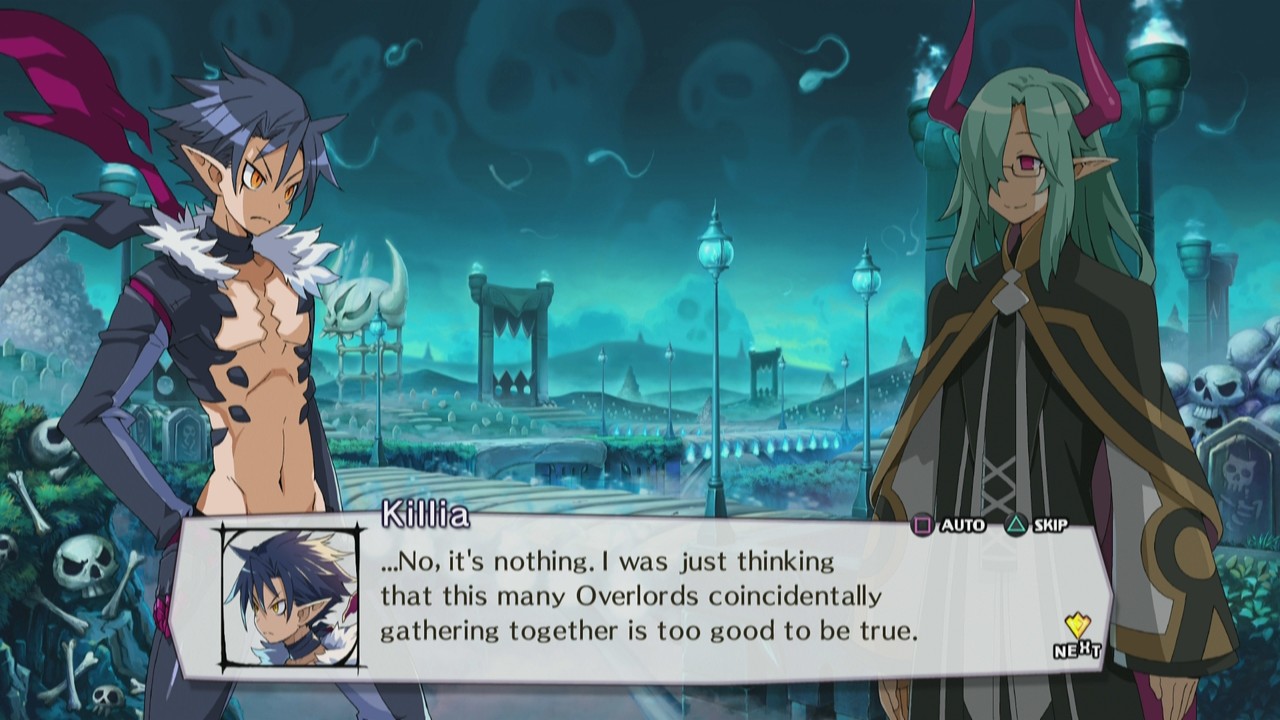 The beginning of 'Disgaea 5' paints a dark picture. A war across all of the Netherworlds has broken out, and the powerful Void Dark has systematically been bringing them all under his control. But then, a fated encounter between Overlord Seraphina and the mysterious and powerful (and hungry) Killia occurs, and the wheels of a true rebellion begin to turn.

'Disgaea 5's story starts off really bland, honestly. Killia is an anti-hero type that has been long played out in RPGs, Seraphina starts off as an annoying dominatrix, and Red Magnus is the most grating musclehead trope to grace my ears in a while. But as the plot continues, and these and other side characters develop, they become a very likeable bunch. Even though the actual plot never really turns into much beyond the trite "defeat the evil guy" trope, the more serious tone of 'Disgaea 5,' coupled with characters that actually add to the story, make the unfolding narrative told via the cutscenes enjoyable to watch. 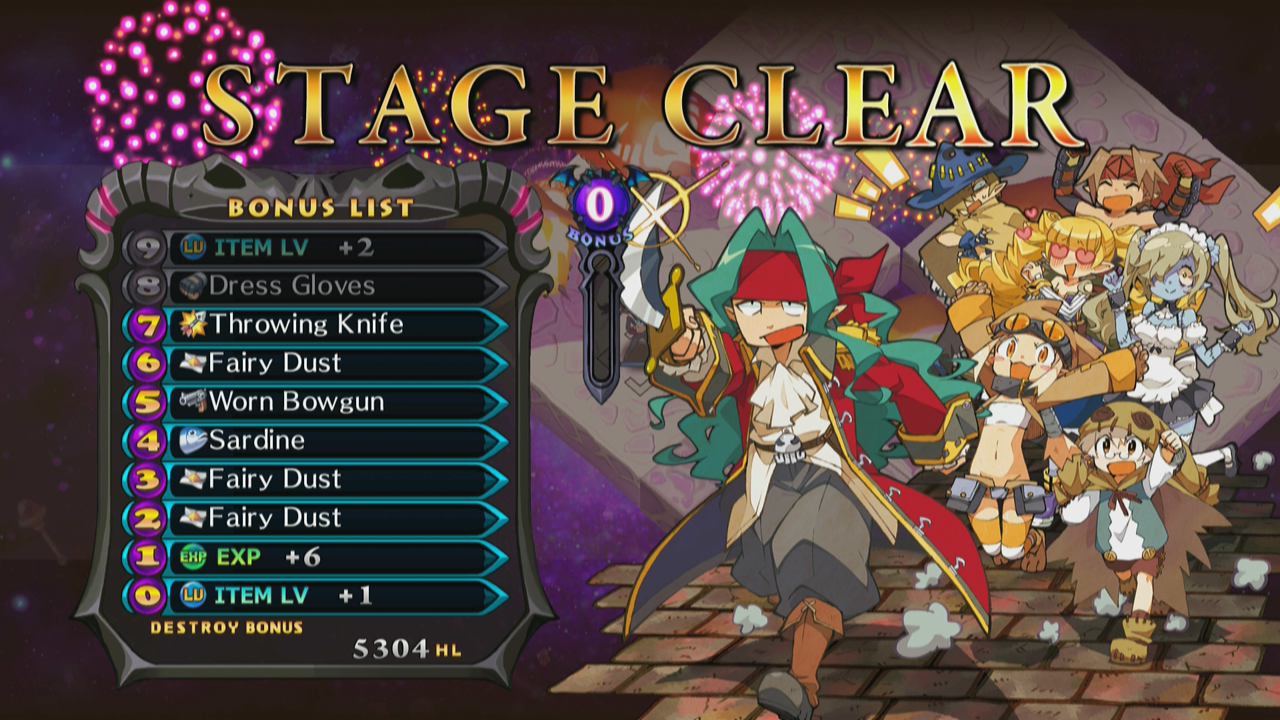 The 'Disgaea' series, though, relies most on two aspects—its humor and its absurd mechanics, and 'Disgaea 5' is most definitely not lacking in either. While the main plot is mostly serious (well, some of it is still a bit silly), the humor is still quite present in other aspects of the game with the NPCs, skill descriptions, and even by the actions players can take in the home base. There's something extremely funny about punching Prinnies, I must admit. But, since the humor isn't beaten over the player's head at every turn in the story, it can be easier for those that are lukewarm to 'Disgaea's sense humor to ignore and focus on other aspects of the game.

For those that want to dump hundreds of hours into 'Disgaea 5's SRPG gameplay to reach level 9999 and do millions of points of damage in crazy ways, this title does not disappoint. Many of the series' mechanical staples, from Geo Effects to the Senate to the Item World return here, and more recent series additions like the Cheat Shop (which is great for grinding) also made the cut. It is worth noting that the stages are much less "puzzle like" in nature as opposed to 'Disgaea 4'; Geo Effects go back to their more simplistic role in 'Disgaea 5', so battles are more typical and less an attempt to crack a developer's SRPG puzzle. 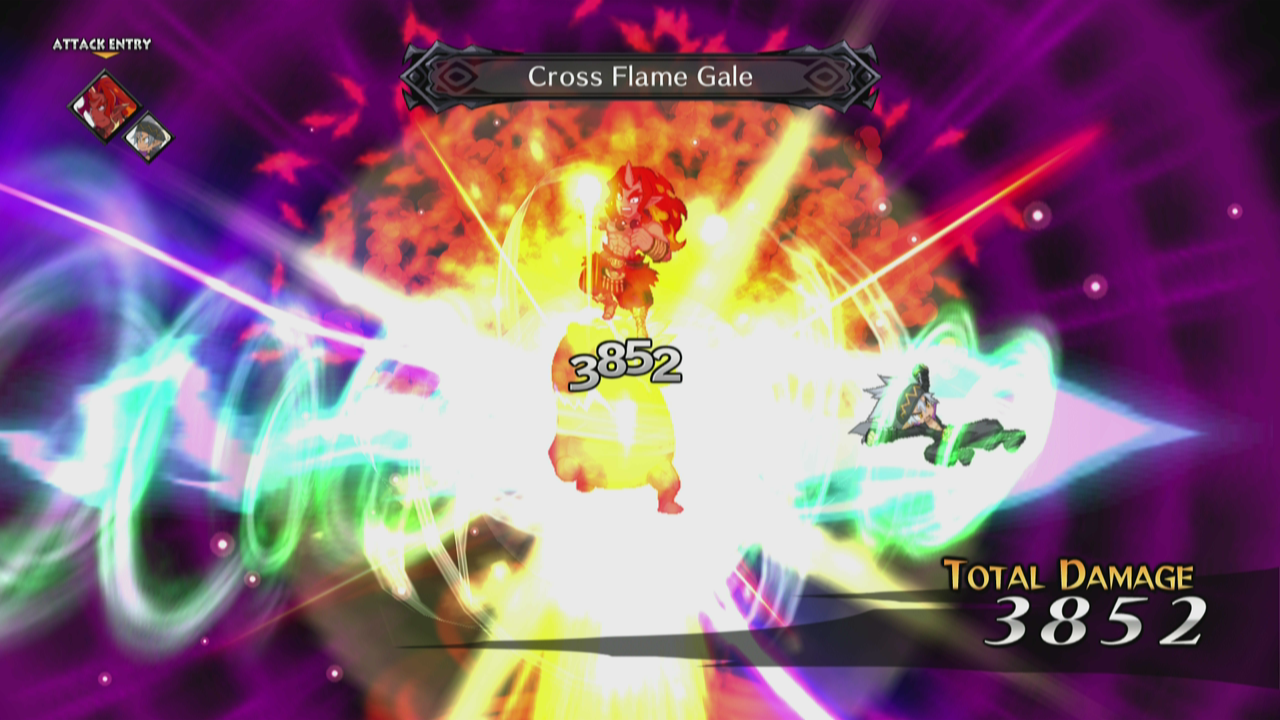 While just the return of old mechanics would fill this title up enough with plenty to do, 'Disgaea 5' goes one step further and jam-packs the game with a slew of new stuff to take advantage of. Party members can explore Netherworlds, finding new items and leveling up on their own. Players can play Chara World, a board game like mini-game that helps characters gain stats for the cost of some Mana as an entry fee. Everyone can eat curry to gain slight boosts for the battle ahead. Enemies can be captured and interrogated for goods and Mana, or made into Netherworld citizens. Squads are a refined mechanic from 'Disgaea 4', allowing party members unique skills and bonuses depending on the squad they're assigned to. There is so much here, if I tried to explain everything that 'Disgaea 5' had to offer, this review would be at least triple the length.

The best part is, a lot of this stuff is optional. It can all be ignored if the player is so inclined to ignore it, and the game doesn't try to shove any of these non-battle mechanics down the player's throat. Typically, there's a very short introduction letting the player know the new mechanic exists ("Oh hey you can research Netherworlds now!"), and it's never really mentioned again, and tutorials are tucked into the menus as opposed to being forced upon the introduction. Thereby, anyone can get as invested as they want to into the extra goodies, but by no means do they have to use most of it to see the game's ending.

It's this combination of good characters and great gameplay that really makes 'Disgaea 5' stand out, and makes the title an absolute blast to play. There's so much to do, and the plot gives players good cause to stick through it to the ending and beyond. 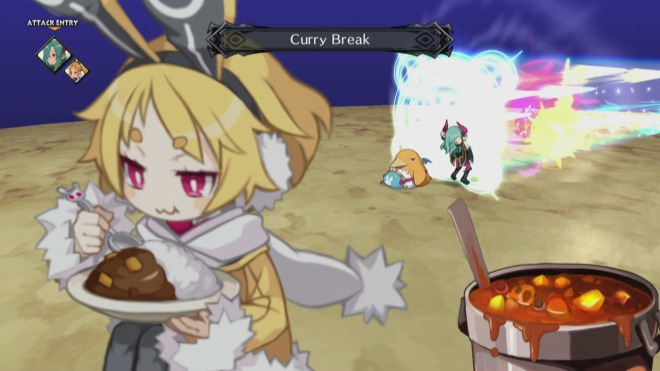 'Disgaea 5's' graphics can be a bit hard to rate. On one hand, character models are upgraded from sprites to full HD models. The characters models and the skill special effects look fantastic, as do the character portraits during cutscenes. On the other hand, while these graphics look great, it feels as though so much more could have been done with the PlayStation 4 hardware. Other than the character models, most of the graphics look like they could have been done on a PlayStation 3, and the lack of portraits moving in cutscenes like they did in 'Disgaea 4' is a disappointing downgrade. Still, on the whole the graphics look quite sharp, and are great to look at and watch in action. 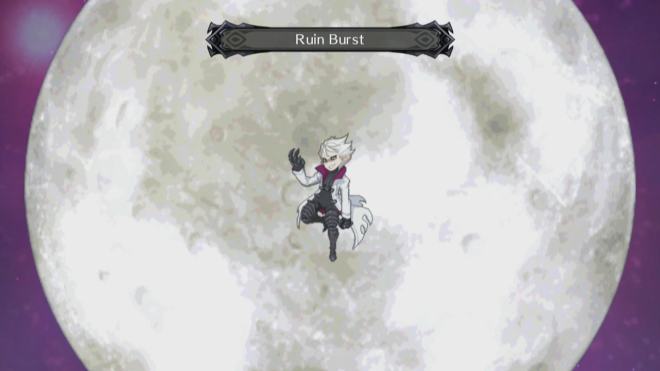 As par for the course for the series, 'Disgaea 5's soundtrack is odd and wonderful, being a joy to listen to. Sato's style really shines through here, giving his unique flair to another Nippon Ichi title and, by extension, giving the game a distinctly Disgaea feel musically. The voice acting is also good for the most part, with characters well cast for their parts… including Killia. Many people that have played the demo seem to complain of the voice actor's lack of emotion for the main character, but it really fits Killia and his backstory, making the perceived lack of emotion behind the voice understandable. 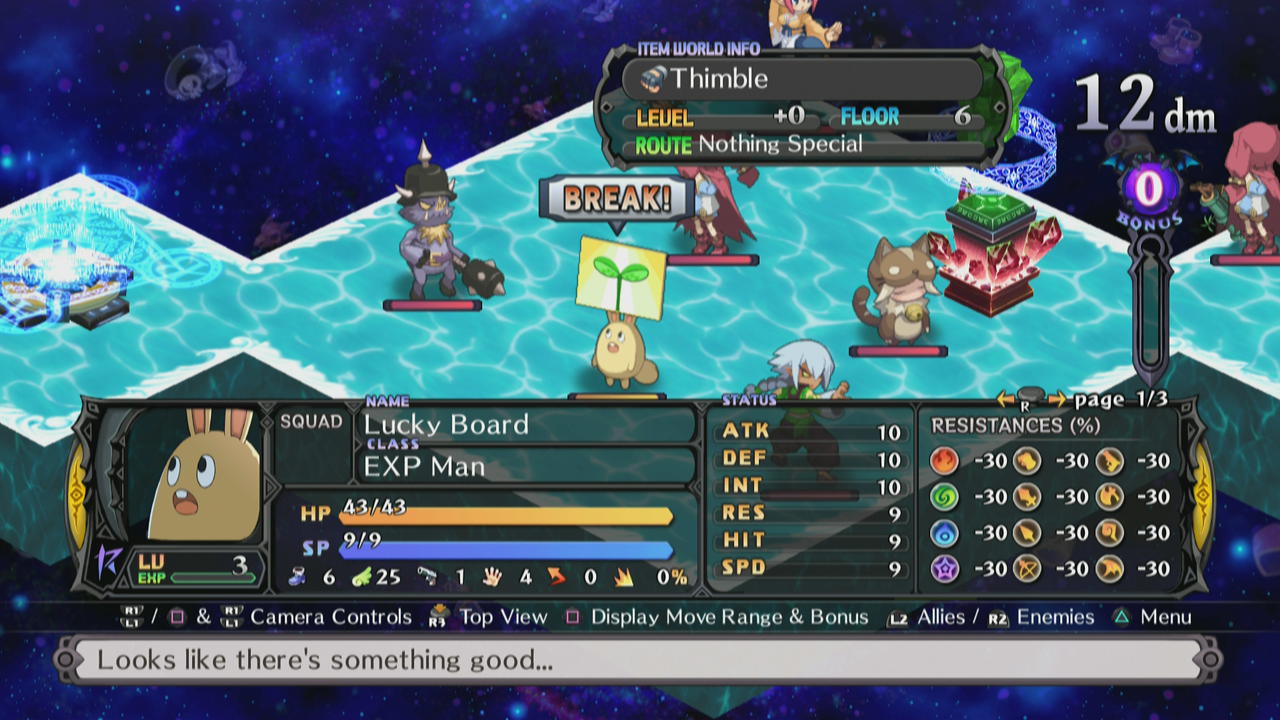 Being a 'Disgaea title,' there is absolutely no doubt as to how much extra content there is. There are old character cameos, different endings to get, the randomized Item World to explore, and more than enough to keep players entertained for at least a hundred hours. Dedicated 'Disgaea' fans will find even more meat here, as they find ways to max out character stats and levels as they work towards completing the skills and item completion lists. 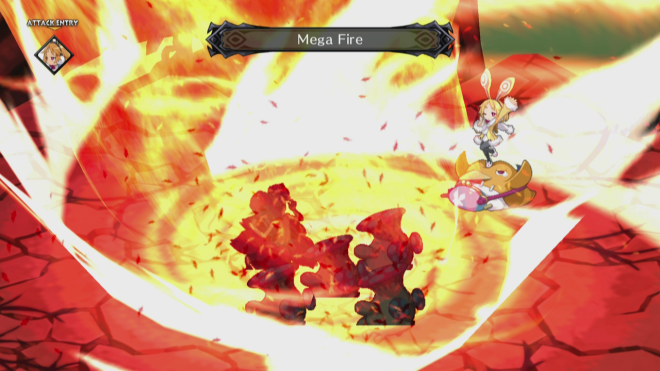 'Disgaea 5' is one of the best strategy RPGs I've played in years. The gameplay is fun and addicting, and the rest of the package offers more than enough incentive for me to play until the ending and beyond. Not only will series fans find another enjoyable entry, but it's easier than ever for new players to get into 'Disgaea,' with the Cheat Shop making grinding quite easy and most of the extra stuff not being forced upon them. Despite my doubts, 'Disgaea 5' sees the series come to the PS4 with all due grandeur. New player or series veteran, this is a fantastic SRPG that should not be passed up.