Another month, another Nippon Ichi title graces are Western shores. This month brings players 'The Awakened Fate Ultimatum', a rouge-like that is a spiritual successor of sorts to the PlayStation 3 title 'The Guided Fate Paradox.' Sticking with genre conventions of ever-shifting dungeons and harsh punishments for failure while injecting a healthy dose of storyline in an otherwise mechanic-heavy genre, 'The Awakened Fate Ultimatum' attempts to appeal to a wider (but still niche) audience.

In 'The Awakened Fate Ultimatum,' you are thrust into the shows of Shin Kamikaze, who has unwittingly been made a God in a brutal war between angels and demons. He is assisted by Jupiel and Ariael, who are tasked with preparing their newly created God for the battles to come. This plot may seem a bit on the simplistic and dull side, but what really makes it stand out are the choices the player, as Shin, has to make. 'The Awakened Fate Ultimatum' isn't one to shy away from tough decisions and really manages to encompass the brutality and moral gray areas associated with war by showing the consequences of the player's decision. 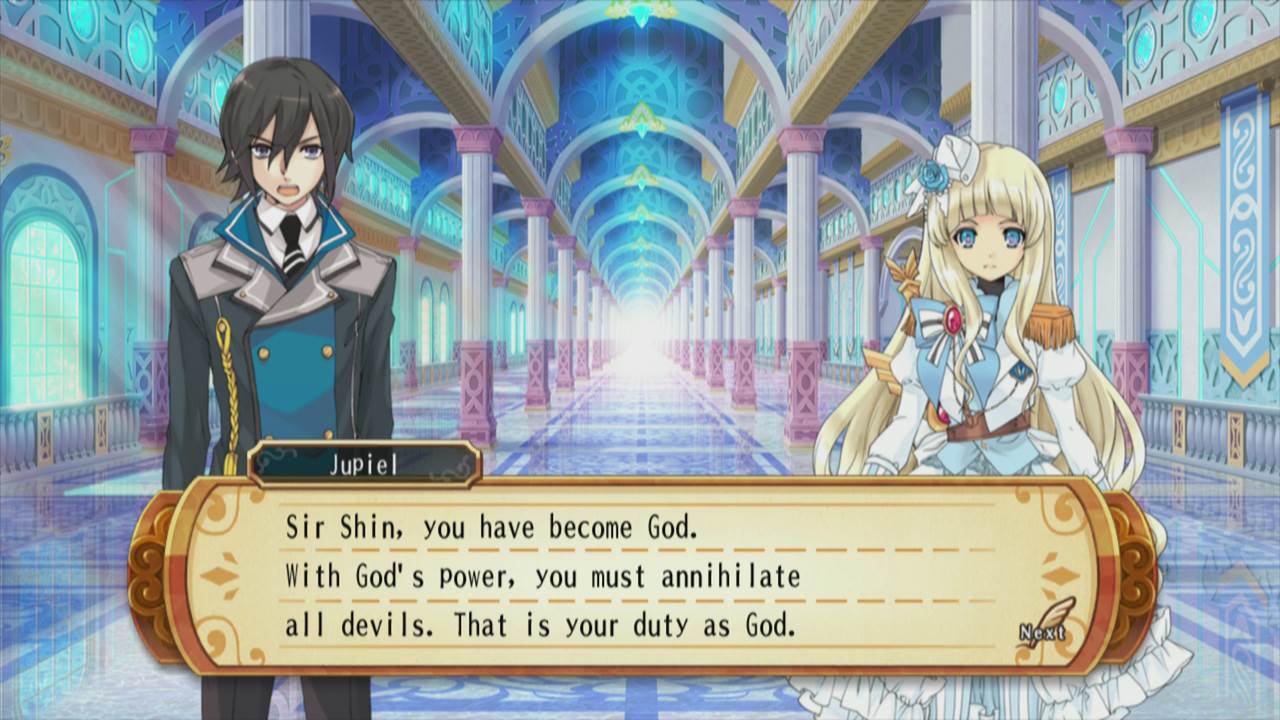 In between these rather lengthy story bits are the Missions. Each Mission is essentially a chapter, and each one contains a dungeon that Shin must work through. These parts play out much like a rouge-like, with randomized floors and items to work through and find. Everything will be different every time Shin enters a dungeon, with the only constant being whether or not a boss is waiting on the final floor.

What sets 'The Awakened Fate Ultamatum' a bit apart from the average rouge-like, though, is Shin's ability to Deitize. Technically, Shin as a human is very weak; he'll take a lot of damage from most enemies and be able to do little himself. However, he can change to Angel and Devil forms, which give him the implied element of said forms and provides extra damage and defense.

This is where a bit of strategy comes in. Every monster (barring bosses, presumably) is either Light or Dark. Therefore enemies will take extra damage from the opposite type of attack. That same rule does not apply to Shin, however; if he is attacked by a monster of the opposite element, he'll take half damage, but getting hit by an element of the same type will have him take double damage. Since remaining in a form takes SP every turn, and since monsters of both types will constantly litter the dungeons, knowing when to Deitize and when to use skills (which require a lot of SP) is important to Shin's survival. 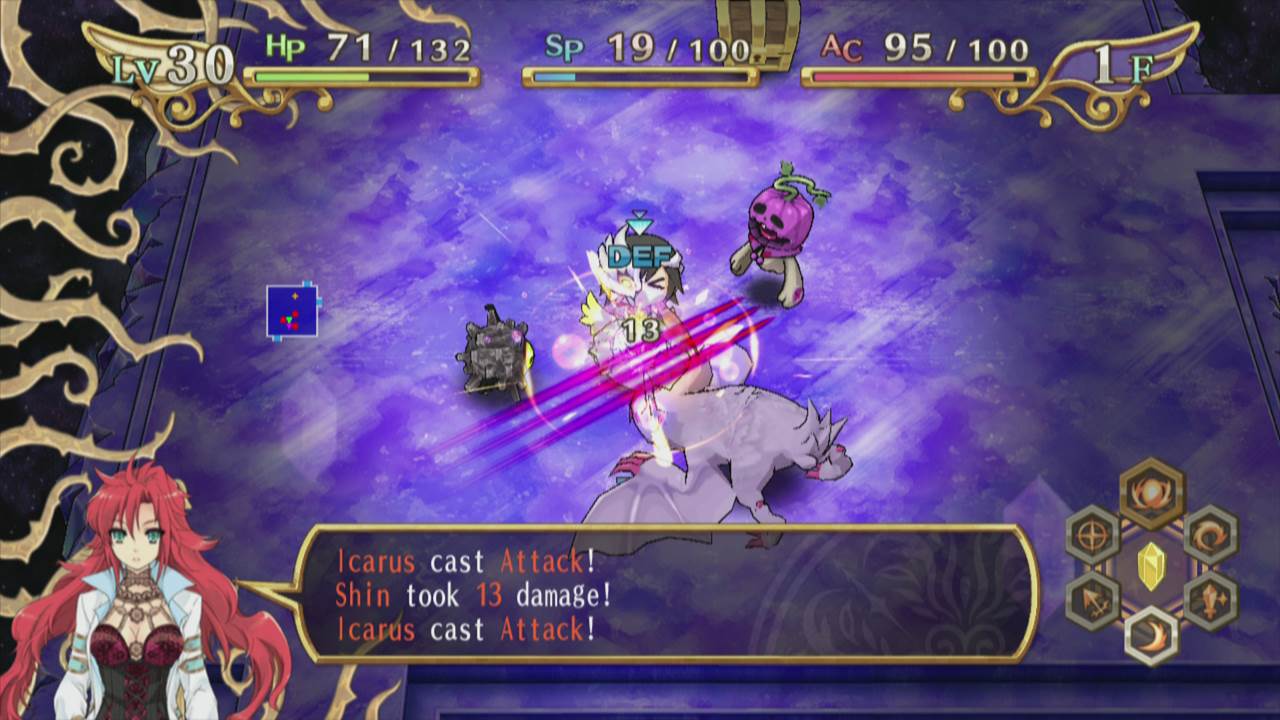 That said, the dungeons aren't actually all that difficult. Provided that the player isn't blowing through each floor as soon as a staircase is found, a typical romp through the dungeon will typically get Shin up to a decent level for the resulting boss or next dungeon. It's also important to note that actual level ups don't provide much: A level up will raise stats slightly and provide one point of CP to level up Angel and Devil forms, but it is the smart use of consumable items and somewhat up-to-date equipment that will make or break a dungeon run.

So, while the dungeon crawling isn't actually dull, the overall lack of challenge does make the gameplay seem secondary to the more interesting plot. There are other little mechanics to help round out the dungeon crawling experience, such as the ability to upgrade equipment and infuse Gems into them, but I was able to go through most of the game without even using these. To the game's credit, the difficulty does ramp up a little during some of the later portions, but by that point the player should be able to keep themselves well-stocked on useful items to mitigate any potential rough points.

As such, this PS3 title's strongest point really is its story. While this does mean that the actual gameplay elements of 'The Awakened Fate Ultimatum' don't particularly stand-out, but they are also decent enough to not detract from the plot itself while providing something substantial for players to diligently work through. 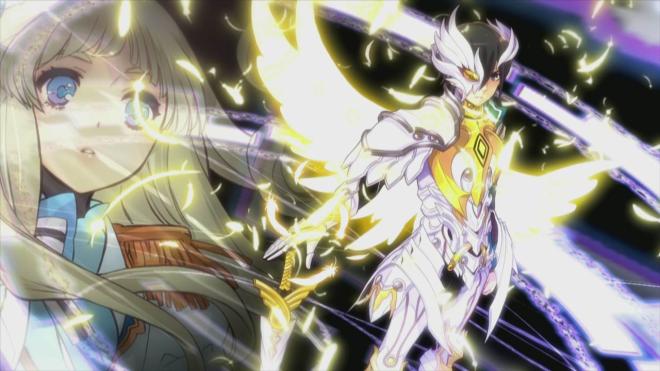 There are two distinct visual styles in 'The Awakened Fate Ultimatum'. The first, and the one the player will arguably see more, is within the cutscenes. Scenes within the game are played out with character portraits standing on a still background, with little changing other than the characters' expressions. The character portraits are well-drawn and animate their emotions pretty well. It's serviceable, but may be disappointing for those that wanted a little more action in their scenes.

The other style is used when exploring the dungeons. Like many roguelikes, dungeons are shown in a top down view. Shin's model, as well as the models for monsters and items, are simplistic, but they get the job done and the player can typically easily tell what alignment a monster falls in with a single glance. However, the title is not afraid to use the same dungeon design for multiple missions, which can make repeat trips rather dull visually. 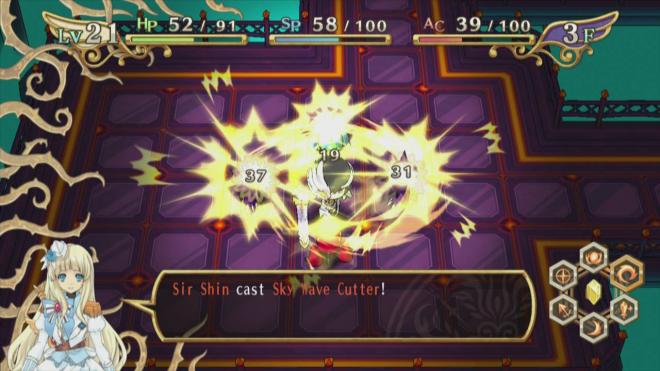 In terms of music, 'The Awakened Fate Ultimatum' is a bit hit or miss. Some of the tracks are quite good, but others can easily grate on the nerves and loop too often, making specific dungeons more annoying to get through than they should.

On the other hand, the voice acting is pretty solid. 'The Awakened Fate Ultimatum' offers both Japanese and English tracks, and in both languages the personalities of the characters and the emotions behind the plot are conveyed quite well. I personally preferred the English track over the Japanese one, but it's really a matter of which one each individual player enjoys more. 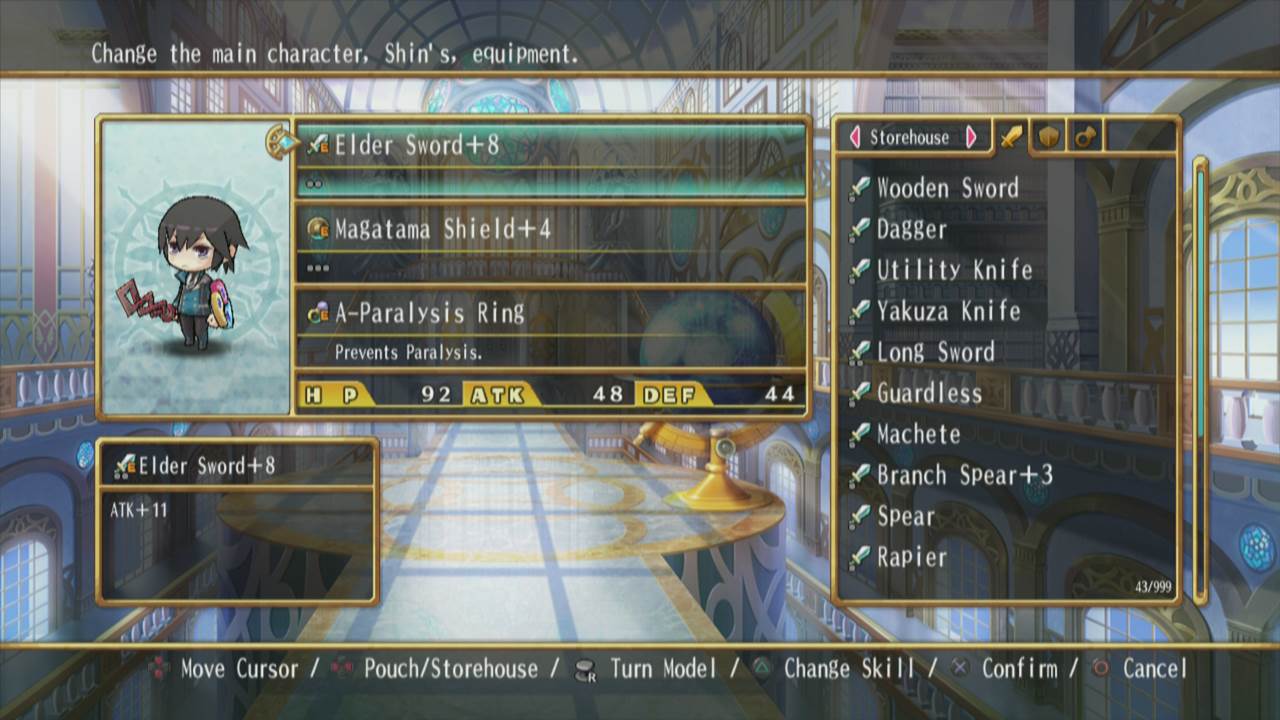 There is quite a bit to enjoy in 'The Awakened Fate Ultimatum' beyond just the main story. As the mechanics suggest, there are a variety of endings to see, as well as extra tid-bits to work through after the main story is complete.

Even beyond the multiple endings, there's a fair bit to do. There are trophies to collect, which involve getting every item and maxing out enhancements, amongst other things that are sure to occupy any fan of the game's time. 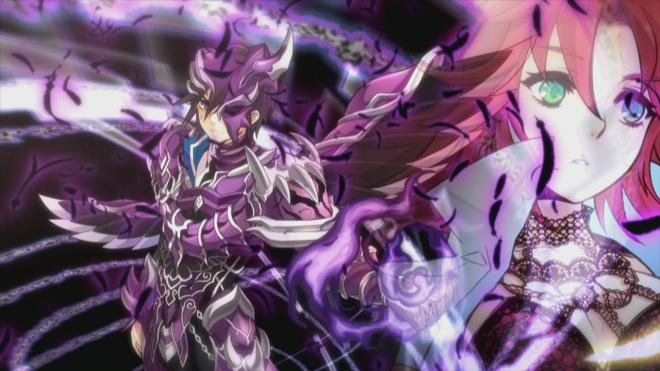 'The Awakened Fate Ultimatum' may not be the most exciting game gameplay wise, but the title makes up for it with an intriguing story that forces tough decisions on the player. The rouge-like base of the game shouldn't scare those intimidated by the usual difficulty found in the genre, as overall the title isn't very difficult. If the premise of the game and its forced decision making intrigues you, it's worth picking up.