The Game Itself
3.5 Stars
The Video: Sizing Up the Picture
3.5 Stars
The Audio: Rating the Sound
4 Stars
Replay Factor
3.5 Stars
Bottom Line
Recommended

'Street Fighter IV' was a phenomenon back when it hit arcades in 2008. The 2009 PS3, 360, and eventual PC versions not only seemed to resurrect the fighting game genre, but also brought it to an online savvy audience. The game went on to have four versions and a mess of DLC costume content.

'Street Fighter V' as pitched by Capcom and Sony is an Unreal 4-powered series' entry, complete with the roster, move set, and other trappings worthy of a numbered mainline 'SF' entry. But this time out, Capcom has promised there will be no 'Super' or 'Ultra' variants. Instead, 'Street Fighter V' will receive new content, including an already announced slate of six additional fighters via updates. This new content will then need to be earned or else bought. The idea, in part, is to keep the player-base together. Likewise, the PS4 and PC versions support online versus play (Ranked, Casual, etc.), which is a major first for the series.

Games as a service. As a platform. Features "coming soon." Server status. Offline. Fight Money…. And it goes on. These are terms that have permeated 'Street Fighter V' in ways not seen before in the franchise or its spin-offs. This is quite distracting, since, from the days of 'Street Fighter II' on the SNES and Genesis through easily half a dozen other 'SF' releases, mainline or otherwise, no other 'SF' game has been as anticipated as 'V,' and no previous release has had betas nor has been positioned as some kind of ongoing service.

Well, after going through pre-release, release week, and beyond, I can at least regard the game without cringing on account of server trouble. That's not to say the game is some kind of great disappointment, (like say 'EX3'), but at launch, it's scarily two-faced. 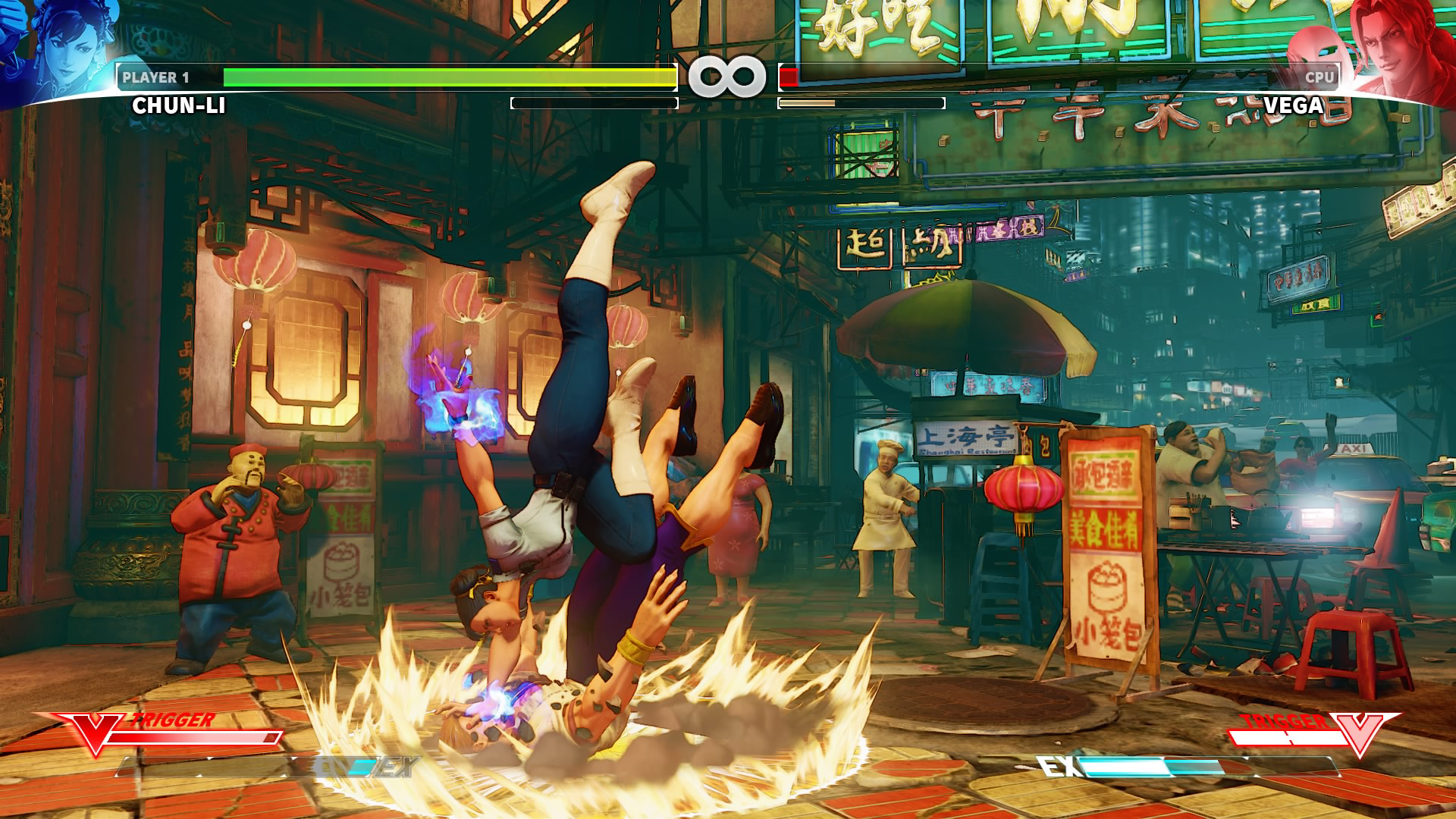 'Street Fighter V' is not an online-only game, but outside of local versus, the game's offline content is something less than perfunctory. There is a sad Story mode for each character that appears to be a promising concept but has been forgettably executed. There are a few easy fights for each character, and some very rough, still cutscenes. All of the story fights can be completed and forgotten about in short order. The fights do garner EXP and Fight Money one time through, but of course an online connection is required to even save this progress.

Survival mode really ups the difficulty and has more meat to it in some ways. It is nevertheless a similar kind of roughly realized concept. It's a series of single round battles against crummy AI and of course, a points/currency system that will lull the player to sleep until the difficulty shoots way up randomly. So much of what appears wrong about the game at launch can be found in this mode. Few things are worse than trying to play Survival only to be disconnected from the server. Trudging through it successfully while the AI teaches some of the worst habits will reward the player with color options for the selected character. Unlocking those colors, getting a high score, and getting Fight Money- these all seem to completely overshadow any hope of an entertaining match with the CPU. 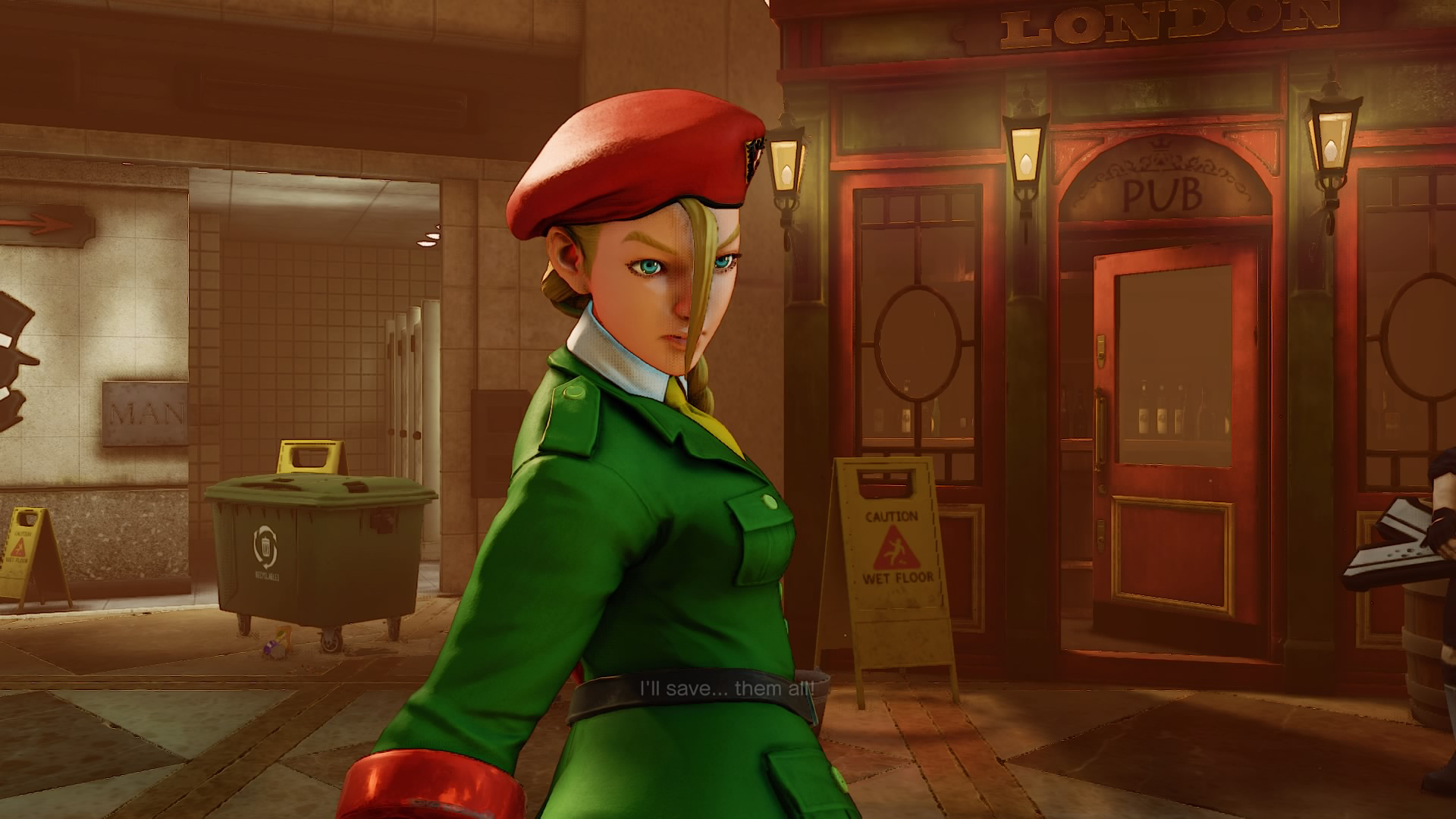 Local versus is the one true offline mode that is worth a damn. It's here where the game's roster, the depth and variety of moves, and the joy of a fighting game can be indulged.

And what a roster. Capcom has done a brilliant job of assembling a roster of fighters that are both familiar and varied. I tend to favor an offensive style, but grapplers and defensive types should also find multiple fighters to choose from. Many fighters have elements of all three categories I mentioned, so different attack styles for the characters are often quite viable. The variety in roster isn't always evident when looking for matches online, but that is a separate problem I'll come back to. One of 'Street Fighter V' greatest strengths is how it challenges players of all skills to use a variety of moves in a given match. When it finally clicked for me that I could use my V-Trigger to enter a different phase of the match, then it opened up a new element of strategy. That may call back to the Alpha series, but 'V' is great about challenging players to spend EX and V-Gauge in smart ways. At the same time, the Focus cancel backdashing and inevitable Ultra set-up or Ultra vs. Ultra hesitancy of 'IV' is nowhere to be found (for now). 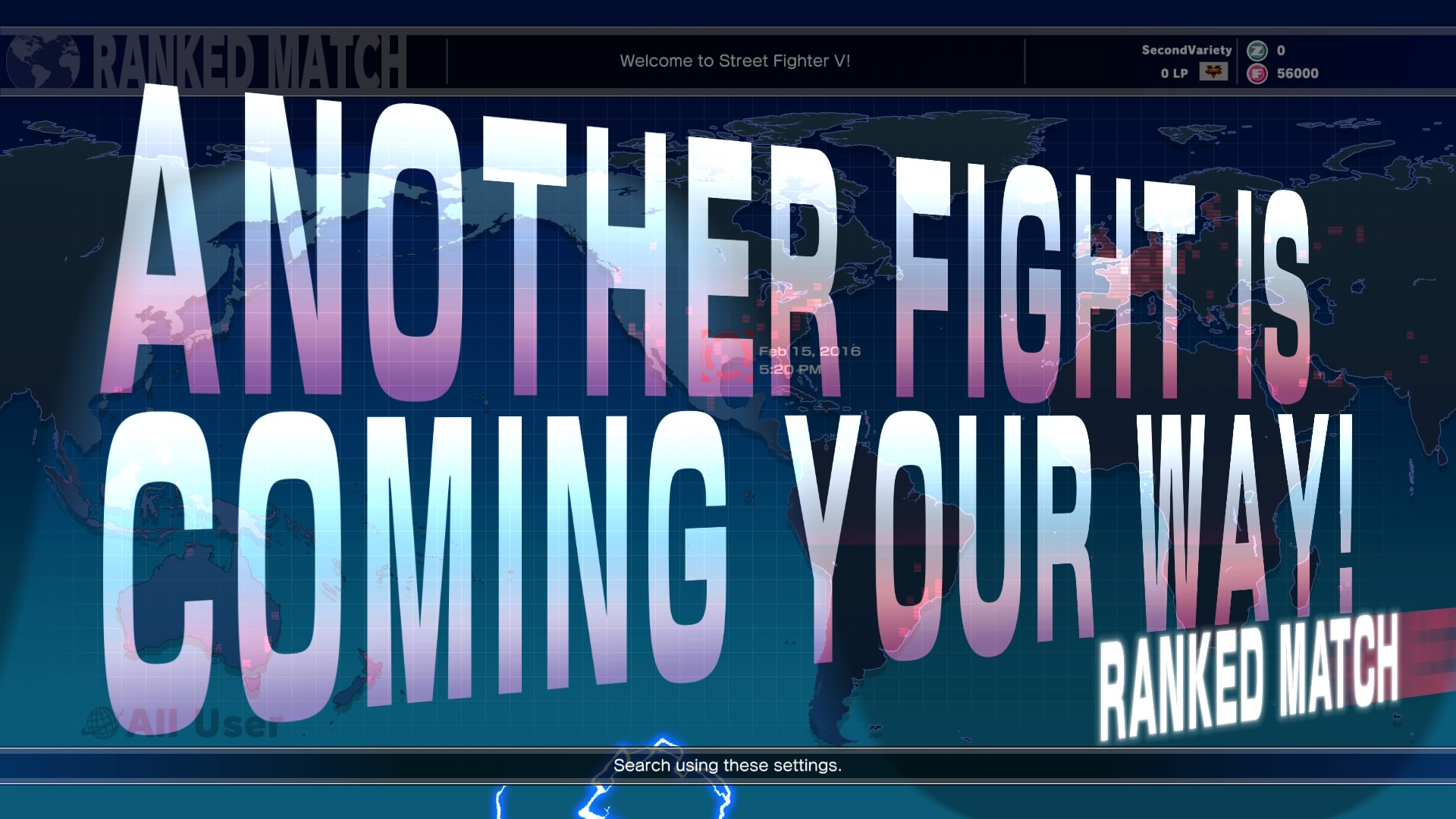 For playing with friends in a friendly way, there is a Battle Lounge system. The Battle Lounges seem to have gotten the worst of the server trouble, and I never had much luck trying to use them. (It was bad enough to cause me to drive to a friend's house to play locally.) There is also the Capcom Fighting Network, which contains replays for the top ranked fighters. It's hardly a new concept, but it has worked well enough in 'V' to make for fun watching.

The game has a Fight Request feature that when turned on, lets the player dabble in one of the shallow local modes while waiting for an online match. Since launch, the wait time has varied wildly, but generally doesn't take too long. Capcom, figuring I suppose that most players consistently play their main chosen character, has done away with character select in Ranked and Casual matches. It's a fine idea as waiting for a character select can make things take longer, but it strongly discourages character variety. There are settings for regions and for platforms when searching, and I would really like to have the character select back, say via a similar option, in more than just the Battle Lounges. 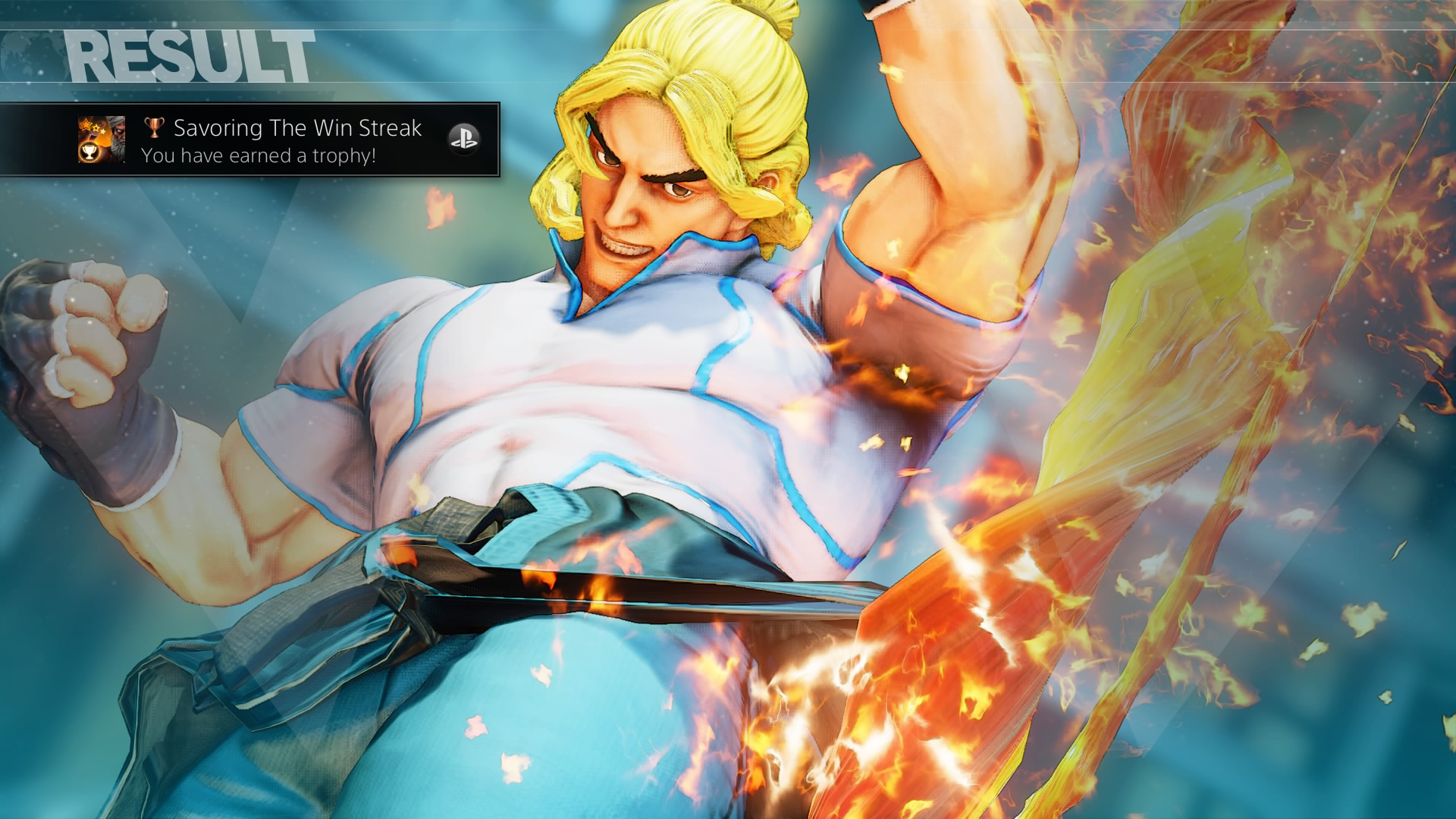 It's that kind of thinking that seems to be troubling the game. I imagine that most players quickly got to a point in 'Street Fighter IV' (especially in 'Super'), where playing ranked matches online was the primary activity to the near exclusion of everything else. And yet, launching 'V' with that as the thinking has given it a shallow feel in spite of the deep vs gameplay.

Challenges/Trials, which are good practicing and learning certain techniques, are promised for March as is the character Shop, and the first DLC character, Alex. In June, a meatier Story mode is due, which is promising, but I'm not without reservation.

When I think back to past 'Street Fighter' titles, they always had the benefit of debuting in the arcade first. The vanilla 'Street Fighter III' board is a good example. There were 10 characters, and two modes, Arcade and Versus. So not only did 'III' start out with an arcade mode, but it also had a boss in the form of Gill. But not only are these two elements missing for the debut of 'V,' they don't even appear to be in the 2016 plans.

What is coming is the shop and Zenny, which is bought with real money. While Fight Money is earned and can be used for all "gameplay content," such as new characters, and story costumes, Zenny can also buy characters and is the exclusive way to buy premium costumes. Right now, with nothing to buy, and having picked up a lot from the single player modes, Fight Money doesn't seem to be bad a way to get new content, but I'm still forced to wait and see. It certainly seems like players will need to be winning regularly in Ranked in order to get multiple new characters once they are released. 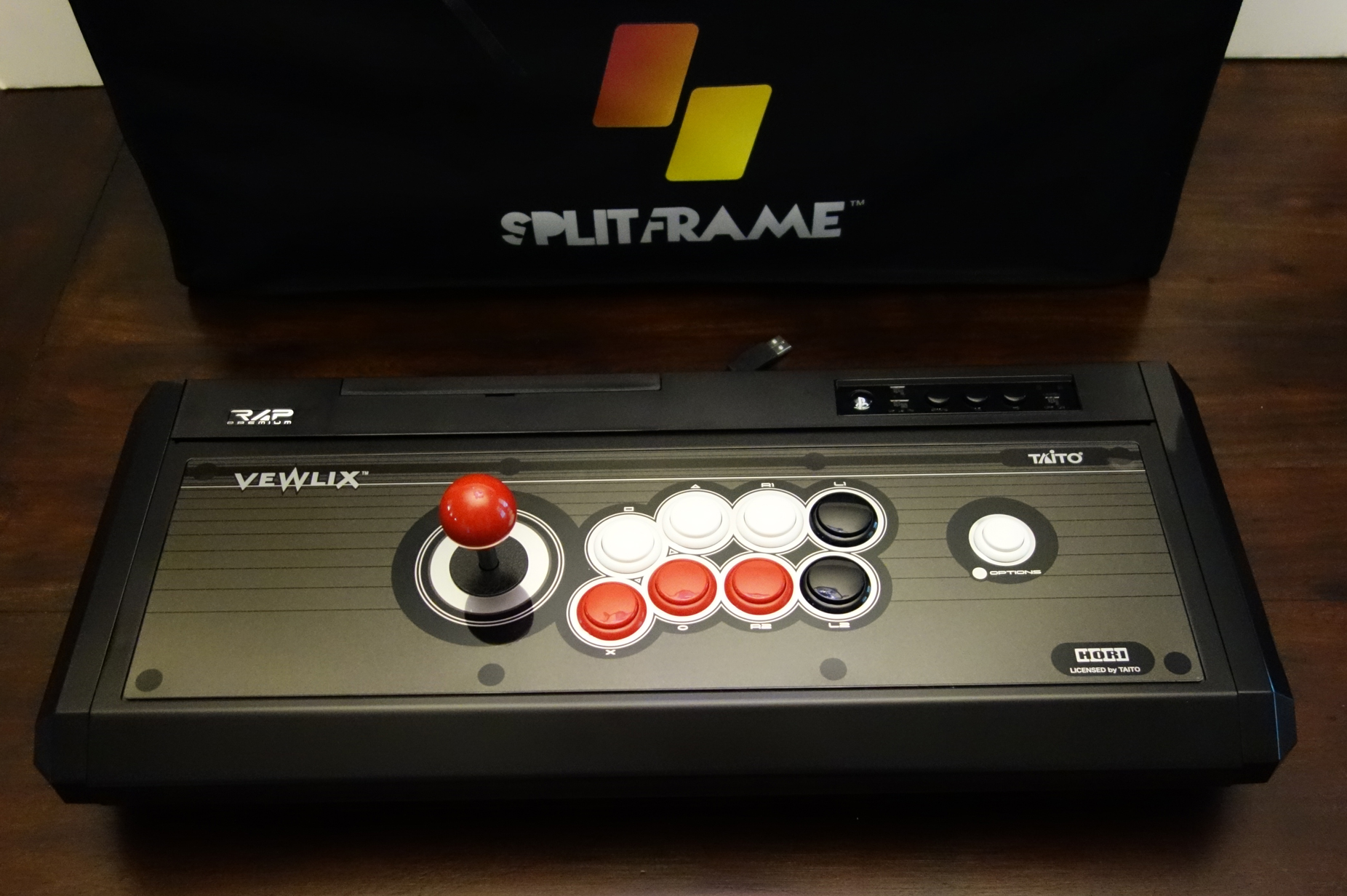 As I've covered elsewhere, the game's fightstick support is pretty robust. The PS3 stick support is good enough that players should be able to decide if the game is worth getting something that natively supports the PS4. That can be a consideration of convenience. I like being able to launch the digital version of the game and let the Sanwas take over without having to do the Legacy Controller authentication or having to have a DualShock 4 controller powered up. 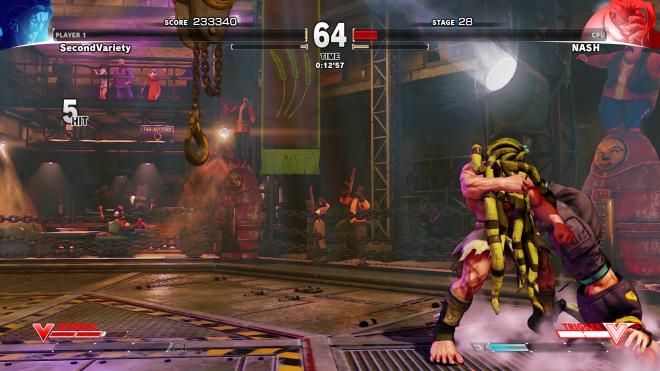 We've come a long way since the debut of 'IV,' and the step up in stylized realism for the characters, when combined with a very clean UI, makes 'Street Fighter V' look pleasingly sharp. The fighting animations are mostly lovely, and there's a strong discipline with the camera that helps to keep the repetitive nature of certain moves from being boring visually. Unfortunately, in spite of the triggered changes, the background stages detract from the presentation. Many of the smaller character details also depend heavily on some funky physics, and in turn do some very ugly things. Because characters strikes take planar priority, the layering of the fighters works great during a match, but often gets messy at the end. The Story Mode's very temp-looking cutscenes are overshadowed by the Story mode costumes that Capcom is clearly showcasing. It'll be interesting to see how things change when the flood costume options start. 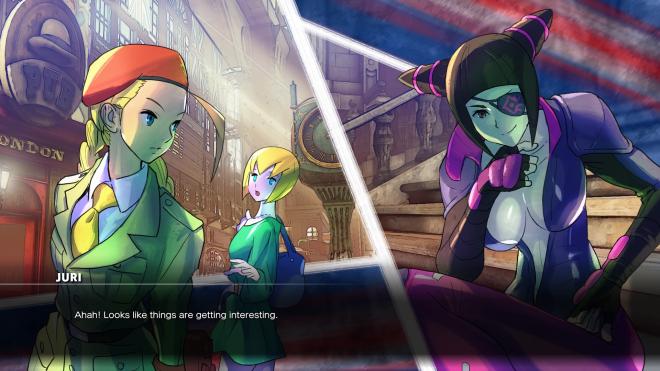 The audio presentation has been dramatically tailored to avoid grating repetition, and the music and guttural fighting sounds are top notch. The exception is (as ever) the voice acting. Both English and Japanese voices are available, but avoiding the worst of it is as easy as always skipping the character intros. (Way to make Laura annoying in multiple languages.) Some of the music is outright excellent. 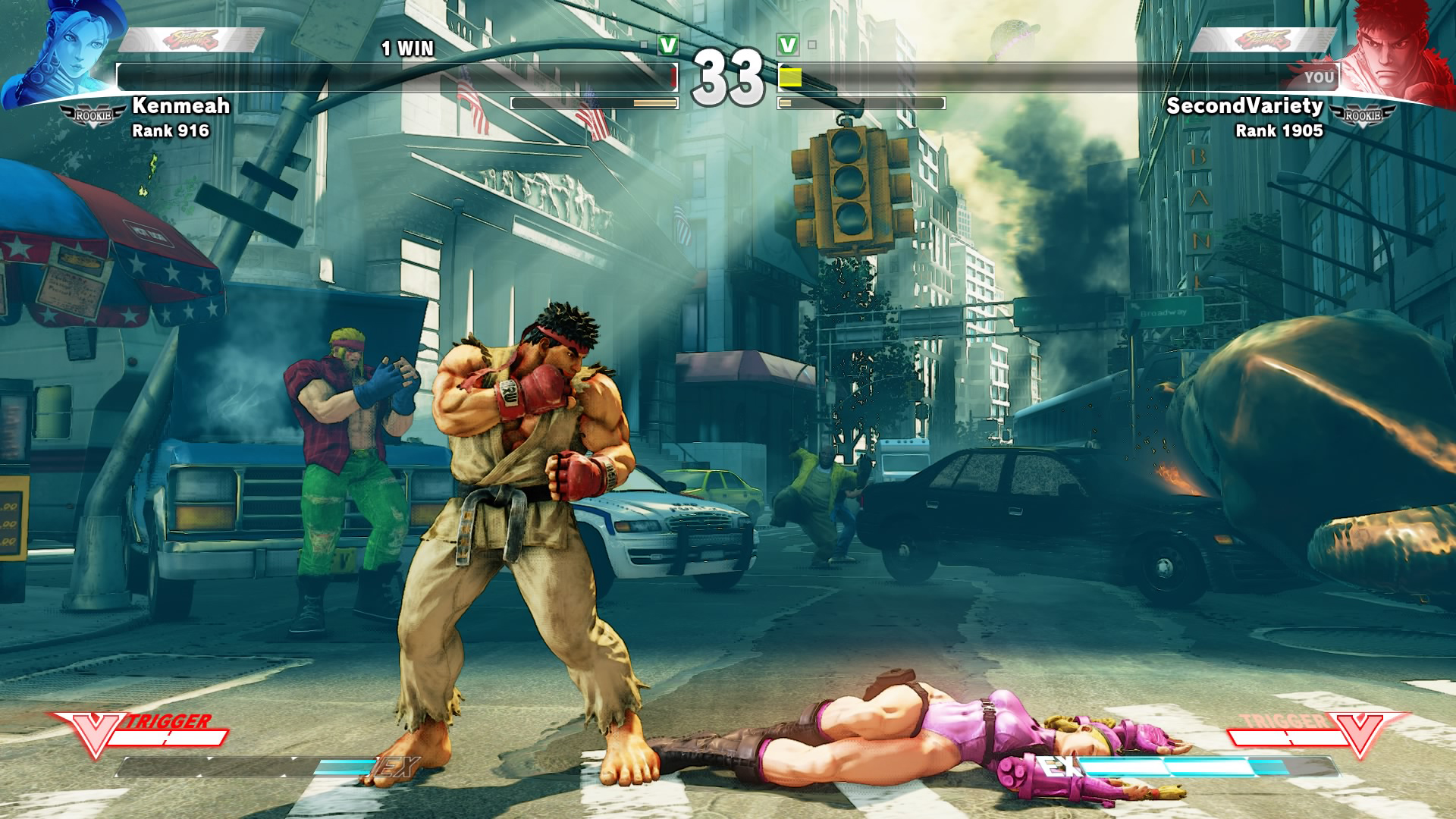 The game is basically focused on online and local versus only. When trying to learn a new character, the only thing to do in game is to load up either Practice or Survival mode with the Fight Request Feature turned on. This will result in nearly as much loading screen and victory animation time as fighting, and feeling out a new character can mean facing an army of Ryus online. (Easily two Ryus to every non Ryu, including Ken.) At launch, it seems that Capcom has let rage-quitters have it easy while the servers stabilize. Still, I was able to hit a rhythm with Necalli and get into a zone where matches could be fast, tough, and wonderfully competitive. When the focus is on the specific moves and mistakes of each round, the game is a top shelf fighter. 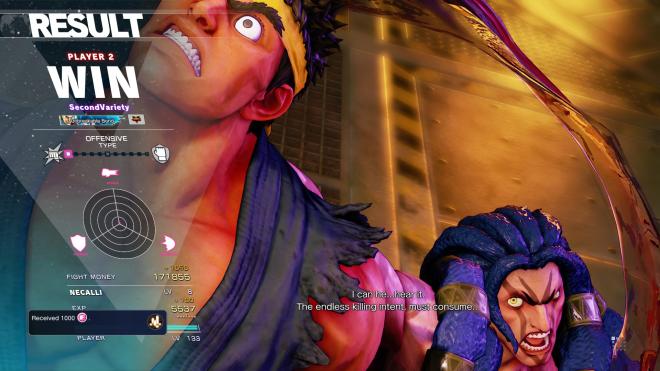 'Street Fighter V' stops short of being an online-only experience, but players need to want to play online nearly all of the time to get much mileage currently. The roster is impressive, but undercut by the game's insistence that players pre-select a single character before going online. In essence, the fighters are more accessible than what the game modes facilitate, but there's no denying how each human vs human match can be marvelous. With the framework in place, and an incredible fighting system delivering on being a new numbered 'Street Fighter' installment, what's left is for Capcom to deliver on their promised content and feature pipeline.