The Game Itself
1 Stars
The Video: Sizing Up the Picture
1.5 Stars
The Audio: Rating the Sound
2 Stars
Replay Factor
2 Stars
Bottom Line
Skip It

'Funk of Titans' was developed by Spanish indie studio A Crowd of Monsters. It is a platformer combining the aesthetics of funk and 70s-style disco with Greek mythology. The player takes control of the demigod Perseus, here portrayed with an afro and smart yellow tracksuit, as he runs, jumps, climbs, and bounces through levels to collect vinyl records and battle Titans to establish funk as the premiere music of Olympus.

'Funk of Titans' is a bit different from other platformers in that player control of the main character is limited. Perseus is always running forward at a set speed, and I could not slow down, speed up, or stop him, unless I placed him in front of an obstacle. This gives it a kind of "on rails" feel that took some getting used to - at first I thought the thumbstick on my controller was stuck. Outside of the running levels there are a few minigames. Perseus occasionally battles bosses with simplistic, repetitive quick-time events, and can ride Pegasus (a flying stick horse) in bonus levels.

Perseus doesn’t travel quite as fast as Sonic, but he zips along at a good pace. Gold vinyl records serve as both the score mechanism and to highlight the path (think gold coins), and collecting all 100 of them on a level rewarded me with...another gold record. Enemies must be dealt with along the way, either by jumping on or attacking them. Some obstacles are dangerous, such as fire and spiked pits. Taking damage from any source results in Perseus losing all of his clothes, and taking a second hit ends the level and abandons all progress. There are no checkpoint restarts. Each level is only a minute or two in length, so lost progress isn’t crippling, but the shoddy controls and frustrating clipping issues can result in frequent consecutive game overs. 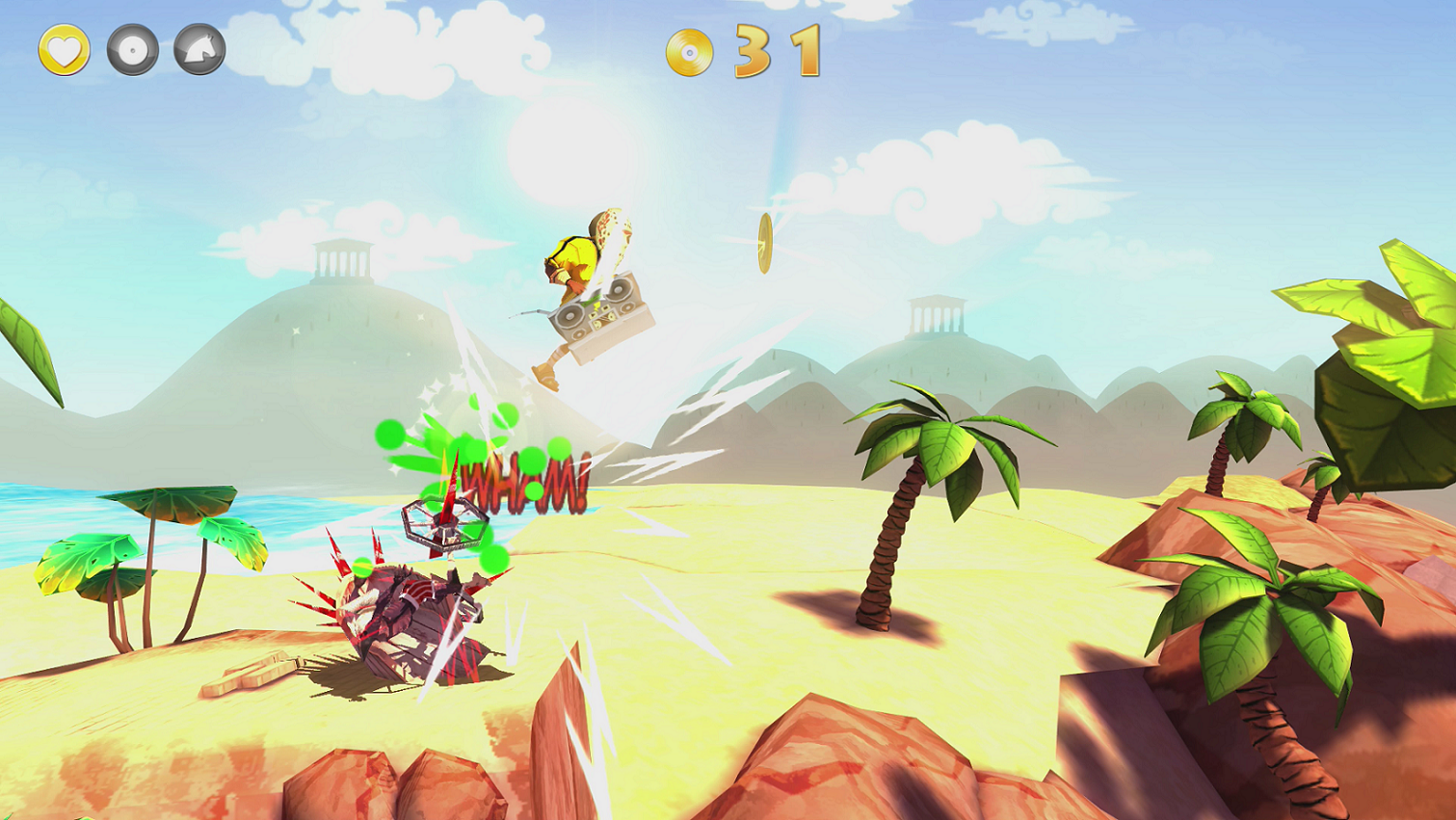 There is a hint of latency in the controls, which is a big issue in such a timing-related game. Because Perseus runs forward autonomously and only has two buttons to control his movements (jump and attack), the game can come off as one big quick-time event. Like any quick-time event, timing is key - miss a jump and Perseus falls down a pit or lands in a fire; miss an attack and he collides with an enemy. I was soon conditioned to hit buttons slightly sooner than would be expected to avoid death. The platforming levels gradually introduce new features, like sliding, wall jumping, and swinging, but the luster fades near the end of the first map, leaving little fresh content in the second and third maps. The levels all seem to feel the same after that point.

The platforming isn’t strong, but it is significantly better than the boss battles or Pegasus bonus levels. The boss battles, either with generic Grunts or a trio of Titans representing the pop, rap, and rock music genres, are a series of button presses without any fun to be had. The bonus levels are frustrating and most of them end in just a few seconds, as Pegasus is too unwieldy to control. Their only purpose is to award the player with more records, which are used to buy different equipment in the in-game store. The store is one of the few highlights, not for its shopping, but for the sassy pop culture references in the item descriptions. 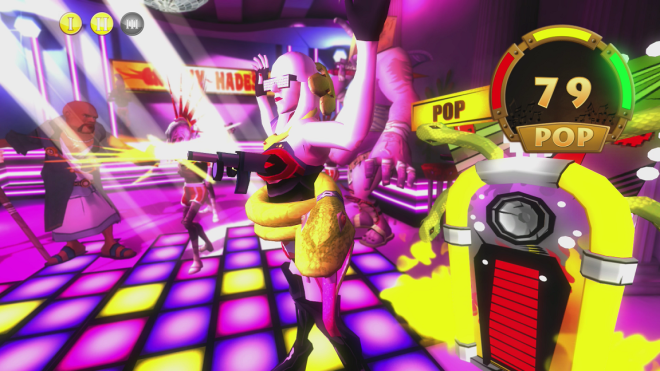 The visuals in 'Funk of Titans' aren’t very advanced, being on the lower end of the downloadable game scale. The environments are bright and chipper, but just not that pleasing, and light saturation is a constant problem. Models are a bit blocky and lack detail, and some of the costumes (especially the pop Titan, who seems to be a spoof of Lady Gaga and/or Madonna) try their hand at satire but just come off as garish. The camera is devilish and cannot be controlled, which can lead to game overs during some of Perseus’ faster sequences. 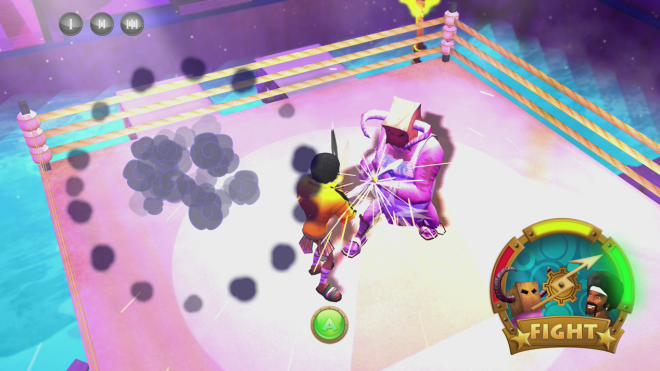 With the title and overall theme of 'Funk of Titans' I was hoping for some kind of rhythm gameplay or at least good music, but alas we have neither. The level music is thin and repetitive. It does have a vague ambiance of funk, but it’s mostly the same thing over and over. Different genres only come into play during boss battles, and even then it doesn’t stand out. There is almost no voice acting besides Perseus’ caricatured blaxploitation exclamations.

Each level has three records (separate from the in-level records), one each for collecting all gold records, avoiding damage, and finding the Pegasus collectible. The short length of each level makes replaying more tolerable, but I felt little pull to return for a completionist run. Rewards are limited to mostly vanity items, but a few Pegasus collectibles are locked behind doors that require certain weapons to access. Access to these weapons is frequently blocked off by arbitrary level requirements, which are completed with simple objectives such as “Slide for 40 meters”. The game itself is rather short, and all of the worlds can easily be finished in less than eight hours. 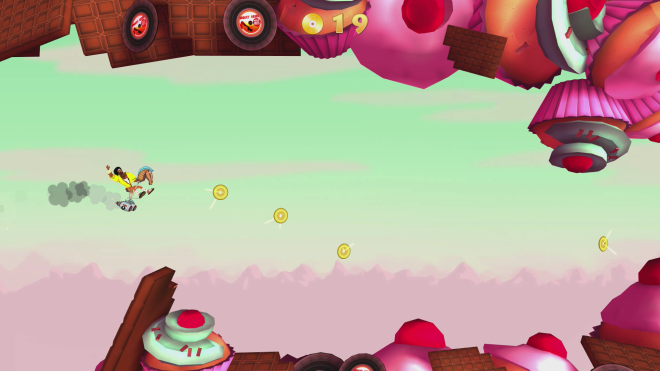 Platforming on the Xbox One is a neglected niche, but even with sparse competition, 'Funk of Titans' doesn’t have much going for it. It's value priced, and a first time console effort, and the transition from mobile to console has not been smooth. It’s a mostly drab, joyless grind fraught with control issues and beset on all sides by a low production value. It had opportunities for humor and more compelling gameplay, but doesn’t capitalize on them, instead opting for shallow level design and an emphasis on quick-time events.