The Game Itself
3 Stars
The Video: Sizing Up the Picture
3 Stars
The Audio: Rating the Sound
3 Stars
Replay Factor
1.5 Stars
Bottom Line
For Fans Only

Digital version reviewed for Xbox One. Being DLC, 'Mystery of the Mooil Rig' requires the base game, 'Sunset Overdrive,' to play.

'The Mystery of the Mooil Rig' is the first story-based DLC for 'Sunset Overdrive', the wacky third-person shooter platformer from Insomniac Games. It fits within the open world of Sunset City and is not a separate experience. It takes place on an offshore oil rig covered in greasy mutants and angry roughnecks, and a mechanized Troop Master Bryllcreem returns to serve as a guide.

'Mooil Rig' is the type of DLC where the starting point is a bit of a mystery in and of itself. Following a little pink icon to the northeast leads to an inconspicuous internet cafe, whereupon the DLC begins and the new missions and other content can be accessed. The Rig is a behemoth of a structure lying to the southeast of Sunset City. It is more like an archipelago with a few large, towering "islands" and a sprinkling of smaller surfaces. The main island is a well-designed platforming playground, being a mostly vertical building coated with grind rails, bouncy squares, and roller coaster pipes. Expansive open shafts cut through the middle of it and each level has pools of oil that can be used as traps or makeshift explosives.

The critical path of the DLC is very short, probably less than two hours’ worth for most players. The plot follows Bryllcreem’s attempt to save his sister from bad guys when her ship is damaged near the rig, and that’s about it. The storyline is about as important as that of the main game, in that it serves only as a way for the player to slide about, blow up mutants, and crack jokes. Not that any of this is really a problem - the fundamental gameplay of 'Sunset Overdrive' is as fun and intuitive as ever. The platforming is slick and easy to control, even if the shooting struggles to keep up at times. A couple of water-based moves are introduced that make scooting across the surface of the ocean much quicker, and it’s a bit puzzling why they weren’t included in the base game. Other sources of new content are few and far between. There are a few new challenges, weapons, and sidequests, but it’s all so thin that the DLC feels like a weapons pack with a couple of missions added.

A few new characters debut in 'Mooil Rig' and a few return. Some of them are kind of lame, like Bryllcreem’s soulless corporate sister, but at least one is pretty funny - a send-up of Norman Bates who squats on the rig and is available for a sidequest. The game keeps the jokes and pop culture references on a relentless schedule throughout, even poking fun at itself and how many pop culture references it makes. Not all of the writing is sparkling, but at least the bad jokes are bad enough to deserve a chuckle. 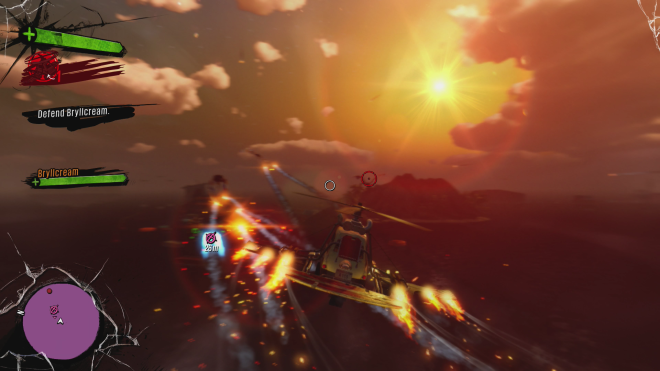 The DLC is mostly free of irritating bugs and artifacts. Hair and clothing sometimes have the odd glitch, like in the parent game, but overall 'Mooil Rig' looks pretty good. The tiny amount of content included is difficult to give an opinion on in terms of modeling, but the boss monster (called the "DL Sea Monster" of course) is sufficiently detailed, if a bit drab in coloring. The roughnecks are reskinned scabs, and the oil poppers are darker versions of their vanilla cousins. 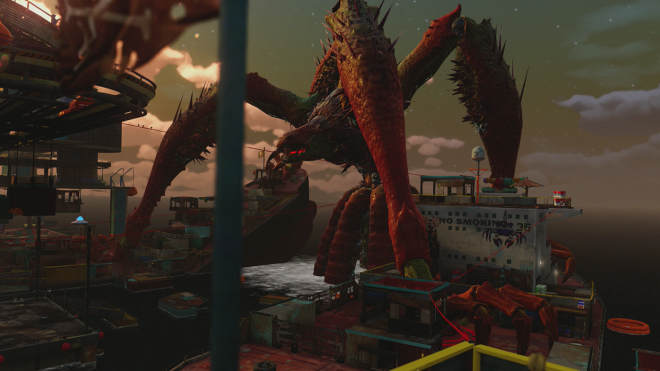 The voice acting is the highlight of 'Mooil Rig’s' audio, with good, self-aware performances wrung out of a small amount of dialogue. No new music has been added, and new sound effects are minimal.

The rig environment is part of Sunset City (kind of - it’s a bit segregated and can only be accessed through the missions or fast travel) and can be visited after the main missions are complete. There is a base, complete with vendors and an amp machine. The side content provides another hour or so of entertainment, and there’s some dull Chaos Squad missions (multiplayer), but that is it. This is the video game version of a short story, not even a novelette. There are some new amps and weapons that once obtained carry over to the main game. 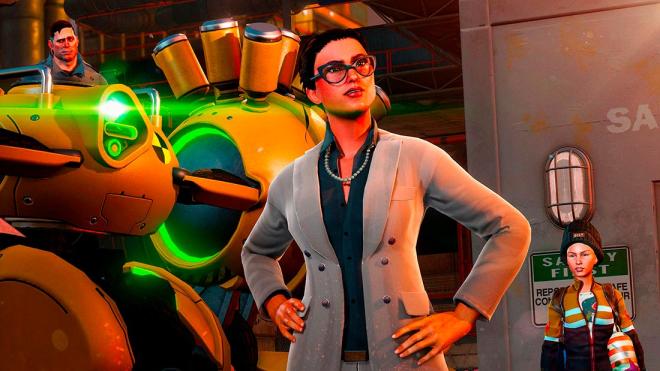 It’s fun enough to avoid being labeled a cheap cash-in or filler content for a season pass, but only just. 'Mooil Rig' has a great level design and setup that could have been used for a lot more. If developers want us to keep opening our wallets for games after they’ve released, they’re going to have to pack in the content and make DLC that offers something genuinely novel or substantial, not just add some polishing before slapping a price tag on it.