The Game Itself
4.5 Stars
The Video: Sizing Up the Picture
3 Stars
The Audio: Rating the Sound
4.5 Stars
Replay Factor
2 Stars
Bottom Line
Recommended

'Grim Fandango' was the last Tim Schafer adventure game before he left LucasArts and founded Double Fine Productions. It was released in 1998 to glowing reviews but only tepid sales, and has been a much beloved cult classic since then. After LucasArts was purchased with the rest of the Lucas group by Disney in 2012, Double Fine was able to acquire development rights (with Sony’s backing) and have re-released 'Grim Fandango' for the first time in over sixteen years in the guise of 'Grim Fandango Remastered.'

'Grim Fandango' is an adventure title, the likes of which LucasArts produced with regularity during the 1990s, the genre's heyday. 'Grim Fandango' was the first LucasArts adventure title to feature 3D art (the characters), but that same 3D art has meant that getting the original game to run on modern PCs has been problematic at best. As such, this cult classic has remained quite elusive until now. Thus, 'Grim Fandango Remastered's greatest feature is that it is playable, hassle free with modern PCs, and (mostly) trouble free. This aspect of the game shouldn't be understated, however, when it comes the gameplay, the story, and so forth, the experience is equal parts classic and vintage.

The game is an eclectic mix of noir, puzzles, comedy, art deco, and traditional Mexican concepts of the afterlife. Many of the characters are life-sized calaca dolls, for instance. It takes place in the eighth underworld, where the protagonist Manny is both a psychopomp and travel agent. His duties involve picking up recently deceased souls from the land of the living and delivering them to the idyllic ninth underworld, often attempting to squeeze a commission out of them in the process. 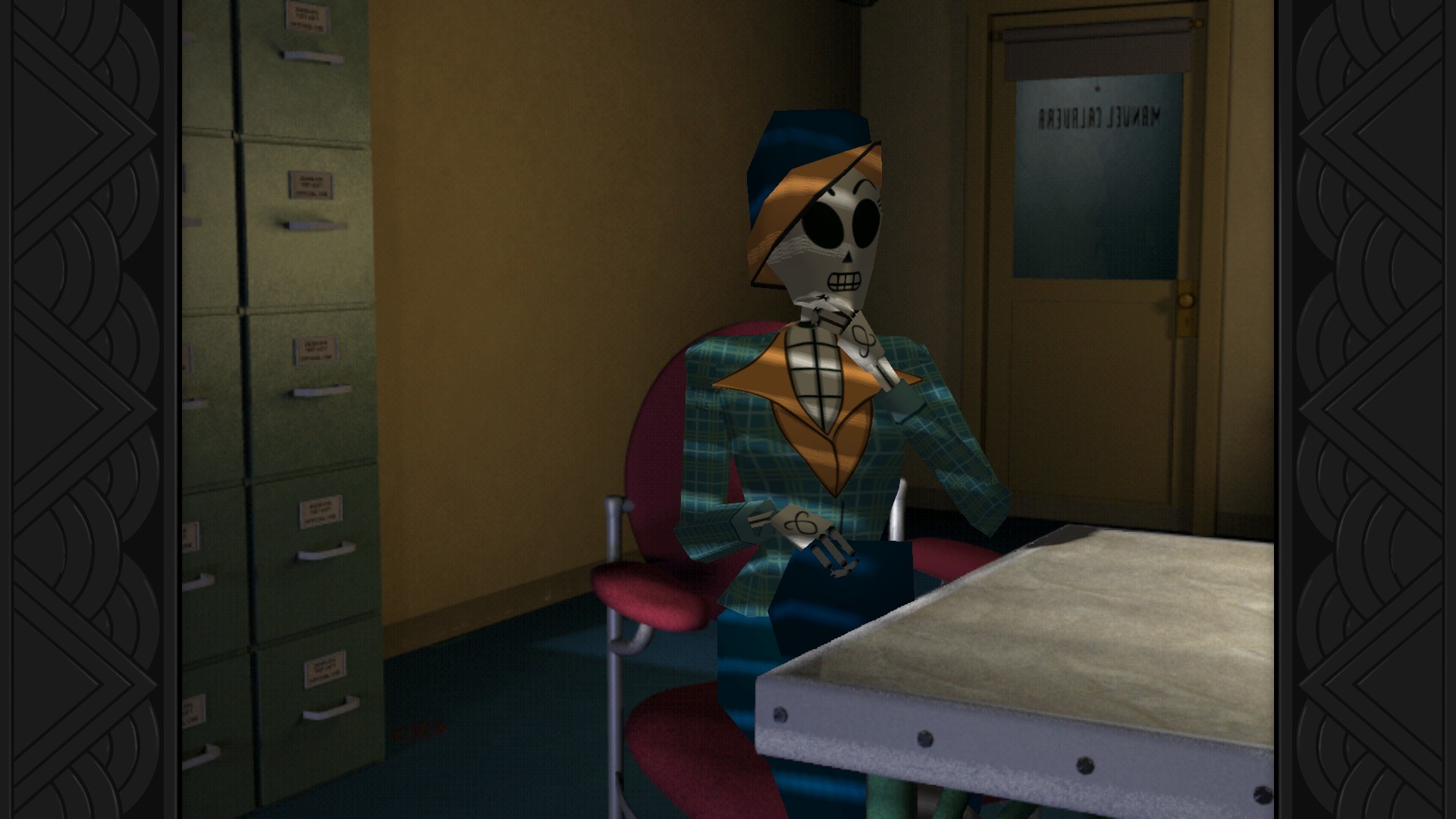 The game begins on the Day of the Dead, when most of the denizens of the underworld are away visiting family in the land of the living. Manny has to work and comes into contact with Meche, a saint of a woman who is easily eligible for the speedy number 9 train, which will allow her to sidestep the usual four-year journey into the ninth underworld. Manny soon loses Meche in unusual circumstances, and the rest of the game follows him and his plucky demonic sidekick Glottis as they try to find her and unravel a dastardly plot in the process.

The world is a concoction of earlier 20th-century sensibilities and architecture. Skeletal beatniks impotently scheme in a smoky bar, art deco skyscrapers tower over the city, and the whole thing is one step away from being as seductively dark as 'The Maltese Falcon'. The men wear smoking jackets and the ladies wear dresses. Mixed into this noir are creepy oddities pulled from a Burton film, like giant cat races, winged spiders, and self-conducted demonic heart surgery. 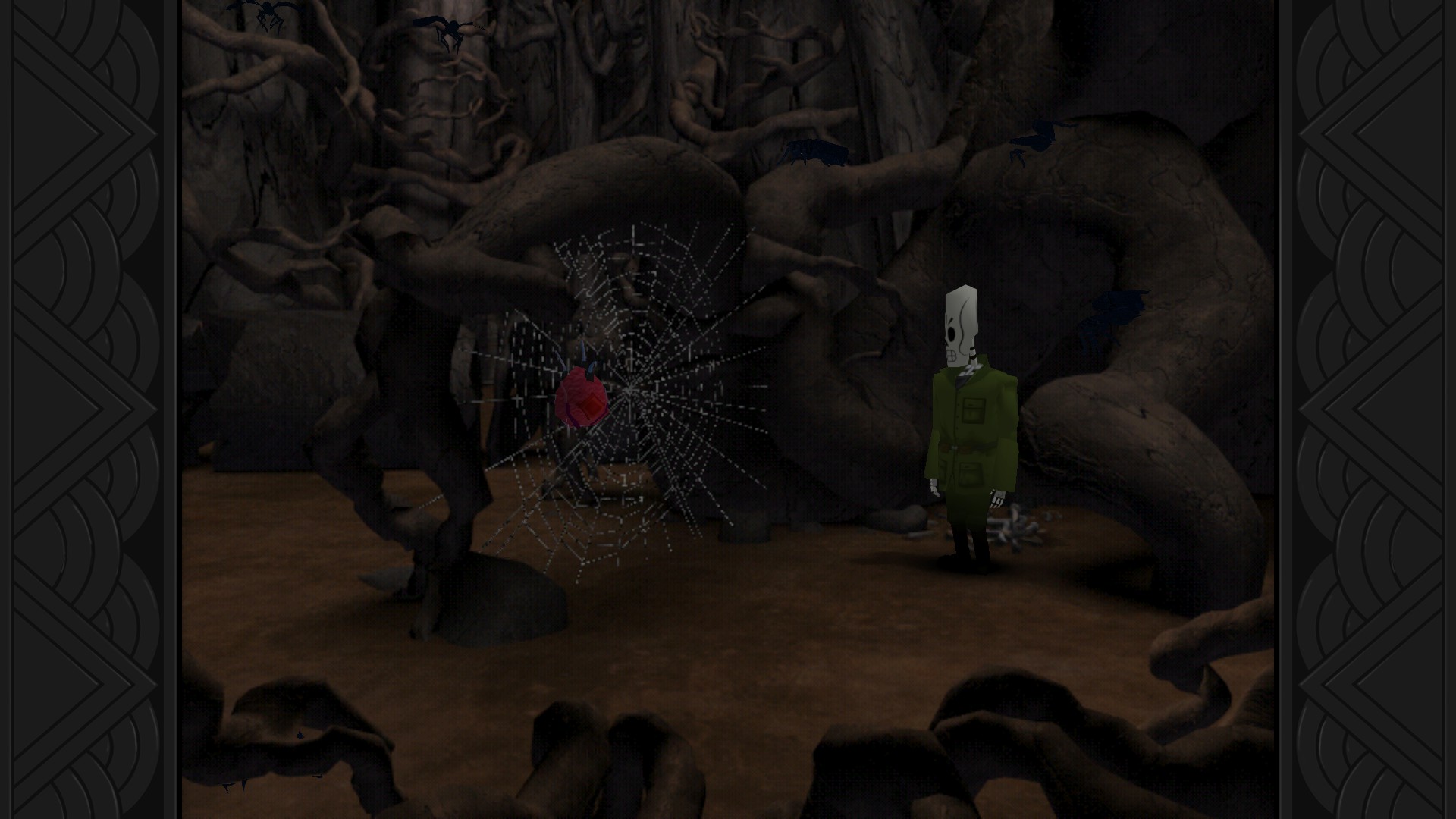 While the game is certainly odd, rife with non sequiturs, and sometimes stumbles in its narrative, the script is brilliant. The conversations are somehow both dark and cheerful in their satire. The underlying theme of the afterlife as a bureaucracy has been done before, but rarely with such humor. The characters pay attention to detail and dialogue is fluid and realistic, even if the topics of discussion are fantastical. Deeper questions are raised about death and its effect on the living; some have answers, and some are ambiguous. Manny is simultaneously a pitiful and thoroughly sympathetic character. He is a good person, even with much of his memory and humanity stripped away after years of thankless labor in the underworld. 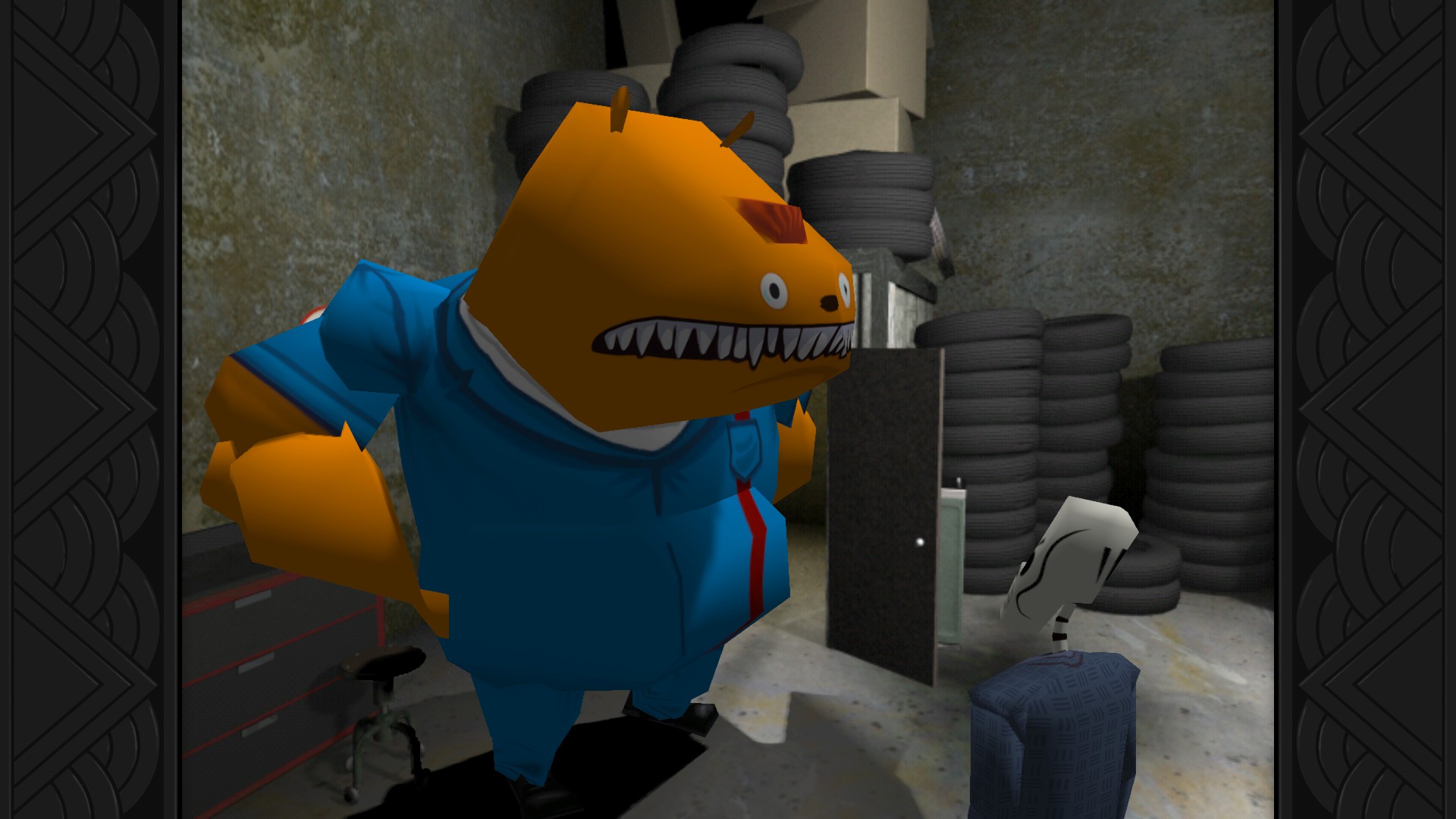 The gameplay itself is heavily puzzle-based. As Manny moves around the maps, he can collect seemingly worthless items that are later used to open up new dialogue choices and proceed through the critical path. The puzzles are a bit less intuitive/easy than those found in contemporary adventure titles, and I had fun trying to figure out most of them. Some are poorly explained, which occasionally led to frustration. One particular puzzle in a forest filled with marrow trees had me staring dumbly at the screen for some time, scratching my head and attempting to stave off YouTube videos for assistance as long as possible. 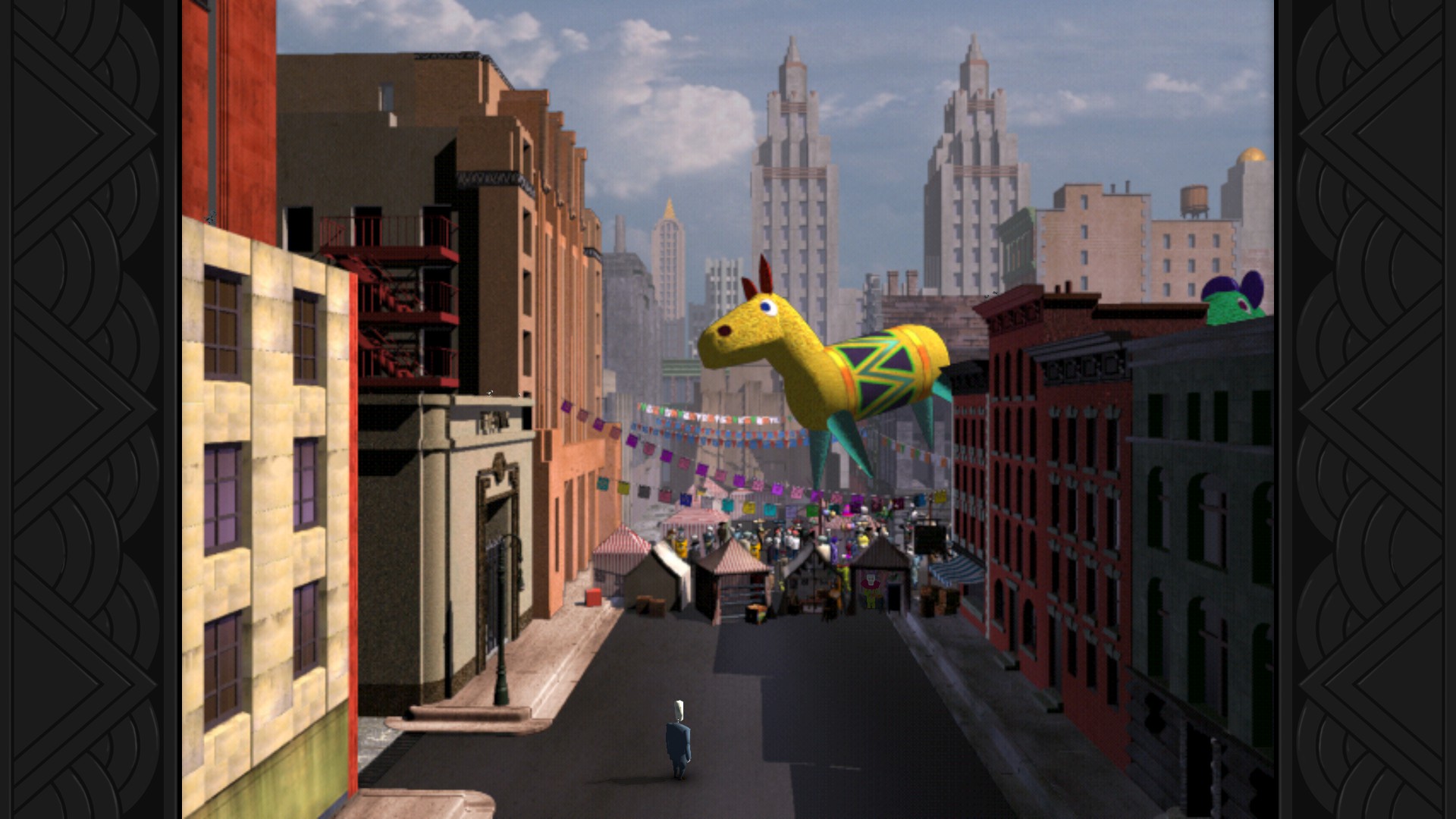 While 'Grim Fandango' is a classic, the remastering is rather shy once you get past the fact that it plays nice with computers built in this millennia. There are some other high points, like the integration with Steam’s Big Picture mode and full controller support. The controller support includes a new familiar control style which I prefer to the dreaded tank controls of the original, but tank is still there as an option for the purists. Autosaving is nowhere to be found, requiring frequent manual saves by the player (and no quicksave button). 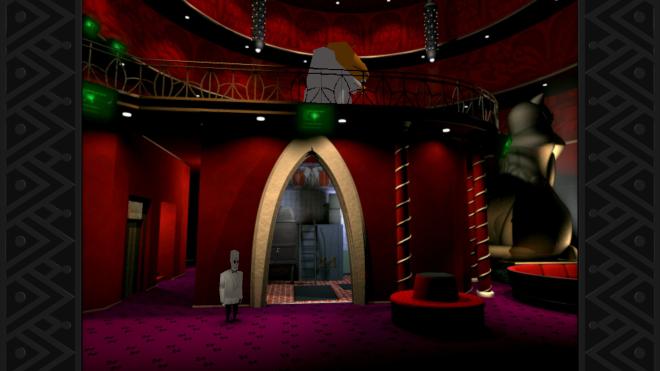 All character models have been redrawn for this version, resulting in much clearer animations and expressions. Lighting has also been enhanced, with improved bloom and shadowing. However, the vast majority of the backgrounds have been untouched and are still the static pre-rendered fare from 1998. The camera can sometimes be an issue, especially when Manny moves into a different room and the perspective changes, which resets the directional controls. The game runs in 4:3 with or without borders to spruce up the otherwise pillarboxed frame, but can be stretched to 16:9. Nearly a hundred pieces of concept art have been included, as well as cutscene replays.

'Grim Fandango’s' voice acting is awesome. The actors are expressive and invested, and the recordings are clear. The jazzy, bluesy soundtrack is similarly well done, and it has been completely re-recorded by a live orchestra for this remaster. A director’s commentary is included and can be activated at the player’s discretion when moving around the environments. It isn’t implemented perfectly - the audio drops out when moving to a new area and some of the developers seem poorly prepared - but for devoted fans, it offers snippets of fresh info and anecdotes.

Each adventure game is best played only sporadically. Playing it too much weakens the storyline and puzzle-solving elements. 'Grim Fandango' offers little in replay value - it is linear and each playthrough will be nearly identical. 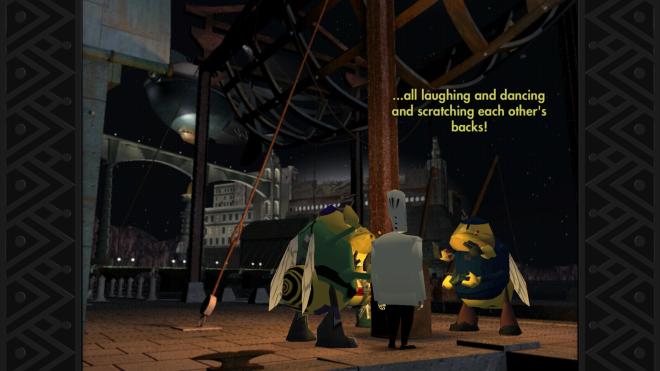 While 'Grim Fandango Remastered' is very tame in its remastering, it is still an improved (and playable) version of one of the best adventure games of all time. It easily represents the "gaming as art" concept while remaining funny and entertaining throughout. If you have never experienced 'Grim Fandango', now is your chance. If you have experienced it, it is worth picking up the remaster, if only just.