The Game Itself
4 Stars
The Video: Sizing Up the Picture
3 Stars
The Audio: Rating the Sound
4 Stars
Replay Factor
3.5 Stars
Bottom Line
Worth a Look

'Saints Row IV: Re-Elected' is a next-gen compilation of last year’s 'Saints Row IV', all of its DLC, and a new expansion pack: 'Gat Out of Hell'. The series has been running since 2006 and was originally a decent facsimile of 'Grand Theft Auto' and other open-world crime games, but has developed its own irreverent, manic personality with each subsequent release.

'Saints Row IV' looks like its predecessors on the surface, but soon after the prologue it departs from a stylized action movie motif to something kind of different. After the events of 'Saints Row: The Third', the loveable Third Street Saints have somehow become the leaders of the free world. The player character is the President of the United States, Keith David is the vice president (the actor playing himself, not the gang leader he has portrayed in the series), and the cabinet is made up of their criminal associates. During a White House press release, the Earth is invaded by genocidal aliens who kidnap the Saints so that they cannot interfere with the extraterrestrial occupation. 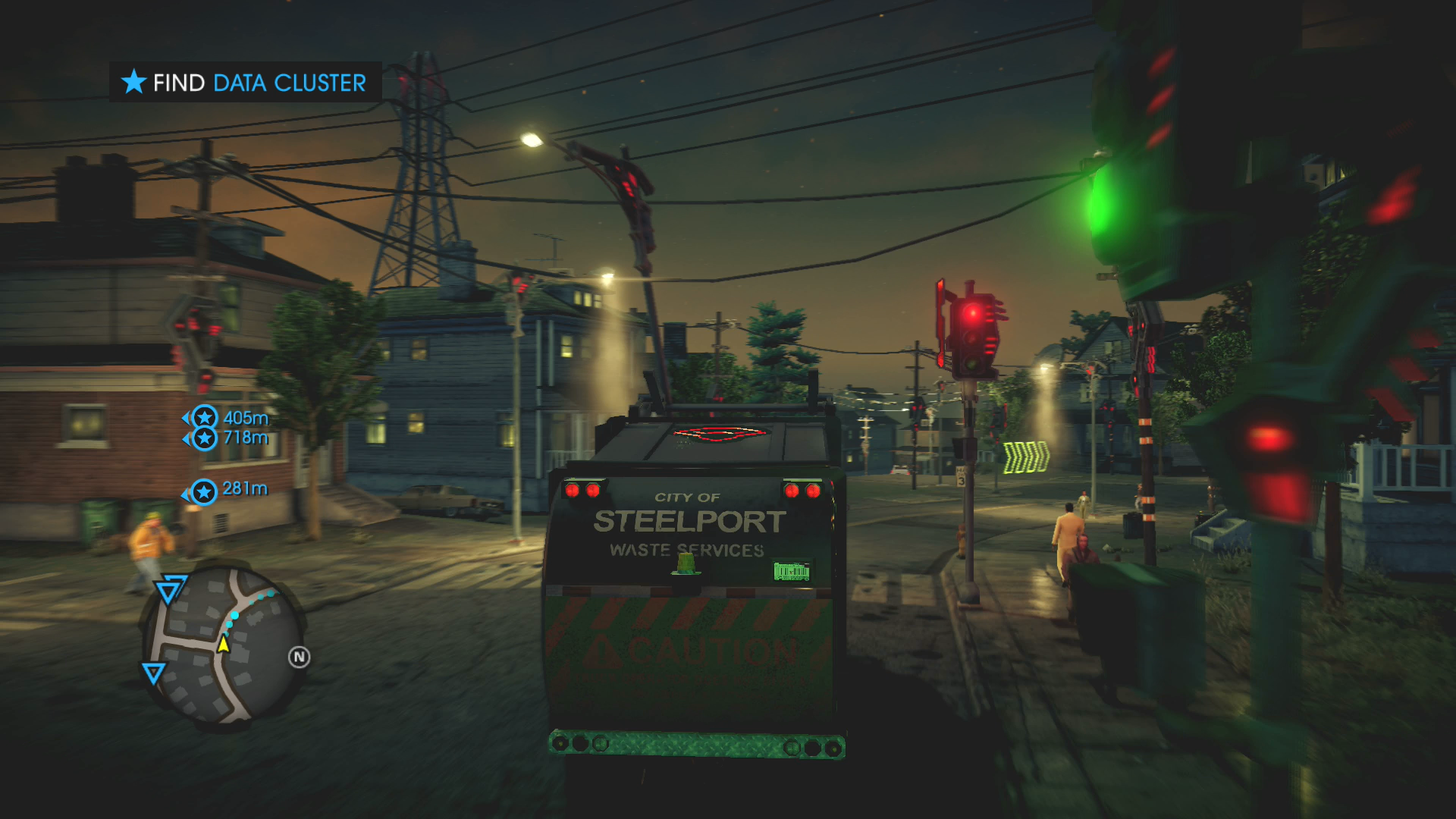 For this franchise, this is hardly far-fetched. 'Saints Row' started to get really weird circa 'Saints Row 2', and now there isn’t even a pretense of seriousness. Over-the-top violence, colorful language, hyper sexuality, and a discombobulated story are all part of the Saints’ charm. The jokes and spoofs are relentless and sometimes funny. The gameplay is empowering, quirky, and fun, and it is in this regard that Volition has outdone itself. In addition to the endless rockets, attack helicopters, tanks, and other pedestrian weapons, 'Saints Row IV' started its development life out as an expansion to 'Saints Row III' before THQ went down in flames and both the series and developer were picked up by Deep Silver. 'SRIV' introduces superpowers to the series. I was able to dash through the streets of Steelport at breakneck speed, leap tall buildings with a single bound, shoot bolts of energy, and more.

The open world is perfect for the superpowers. Side activities were thrown at me in spades. There are hyperspeed footraces and skyscrapers to run up and jump off of haphazardly. There is an insurance fraud activity that let me ragdoll and throw myself into all kinds of things with aplomb. Some activities tossed wave after wave of enemy at me, great for freezing with area-of-effect blasts. Some enemies are similarly superpowered and modestly more challenging. One of my favorites activities was climbing the huge alien towers that float all over the city, where the platforming powers are put to good use. 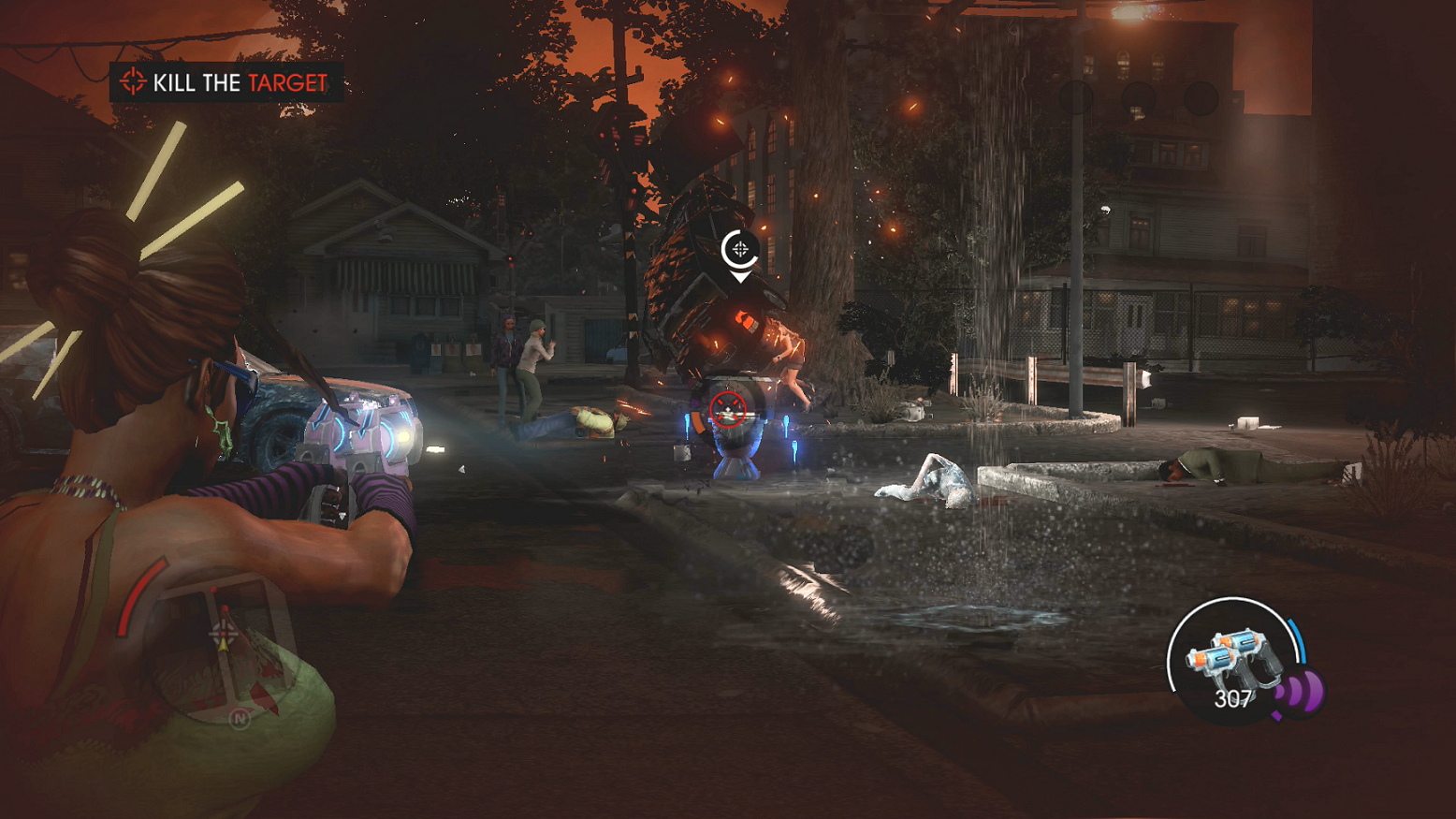 Of course, all of this has been done before, but not in 'Saints' style. The game is crass, often tasteless, and mercifully mocks itself, other video games, Hollywood, American culture, and anything else it can get its hands on. Sometimes it’s a bit much, but usually it’s good for a few laughs. The gameplay is the real reason to play. The sandbox is big and has lots of things to do, and doesn’t get stale for many hours.

Aside from the hero powers, there are mundane things like customizable cars, gangs of loyal followers, conventional and alien weapons (some disturbing), and plain old-fashioned street-level crime. However, after being granted super speed and jumping, I never again hijacked a car, and only operated vehicles when the story required me to. It’s just too fun hopping around like the Hulk. 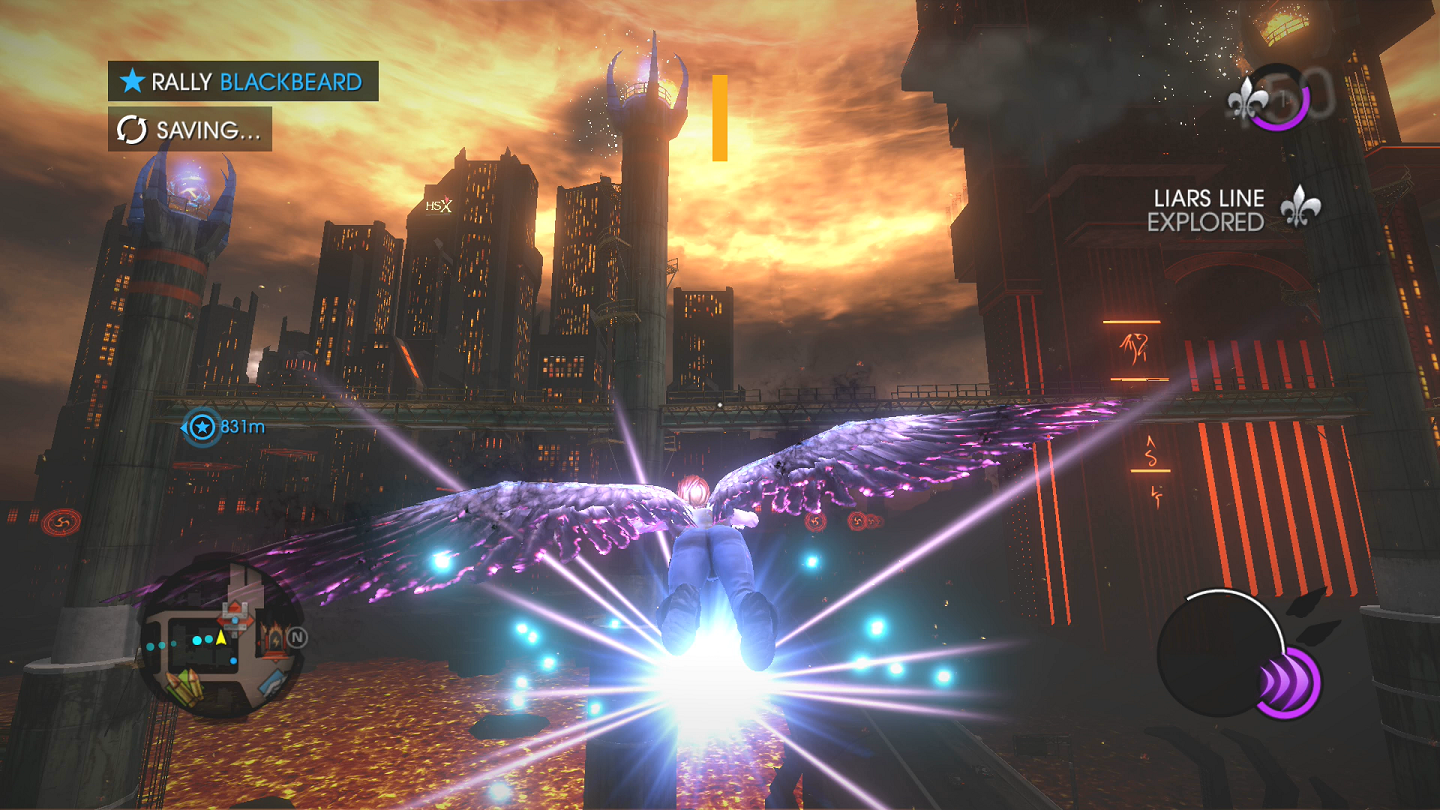 Gat Out of Hell

Included with the compilation is the standalone expansion 'Gat Out of Hell.' Since we’ve already done the alien invasion thing, this campaign is set in the underworld, where Johnny Gat and Kinzie have been enlisted to find the abducted Saints boss. There is a new map that has been built from the ground up, and it does indeed look very hellish. The "people" are zombie-like tortured souls, cops are demons, and vehicles are suitably macabre. Superpowers have been adapted for a more arcane theme - Johnny and Kinzie can both fly, most notably. The other powers are more magical in nature than science fiction but otherwise not very dissimilar from the base game. Still, flying is fun, although the controls can be awkward. 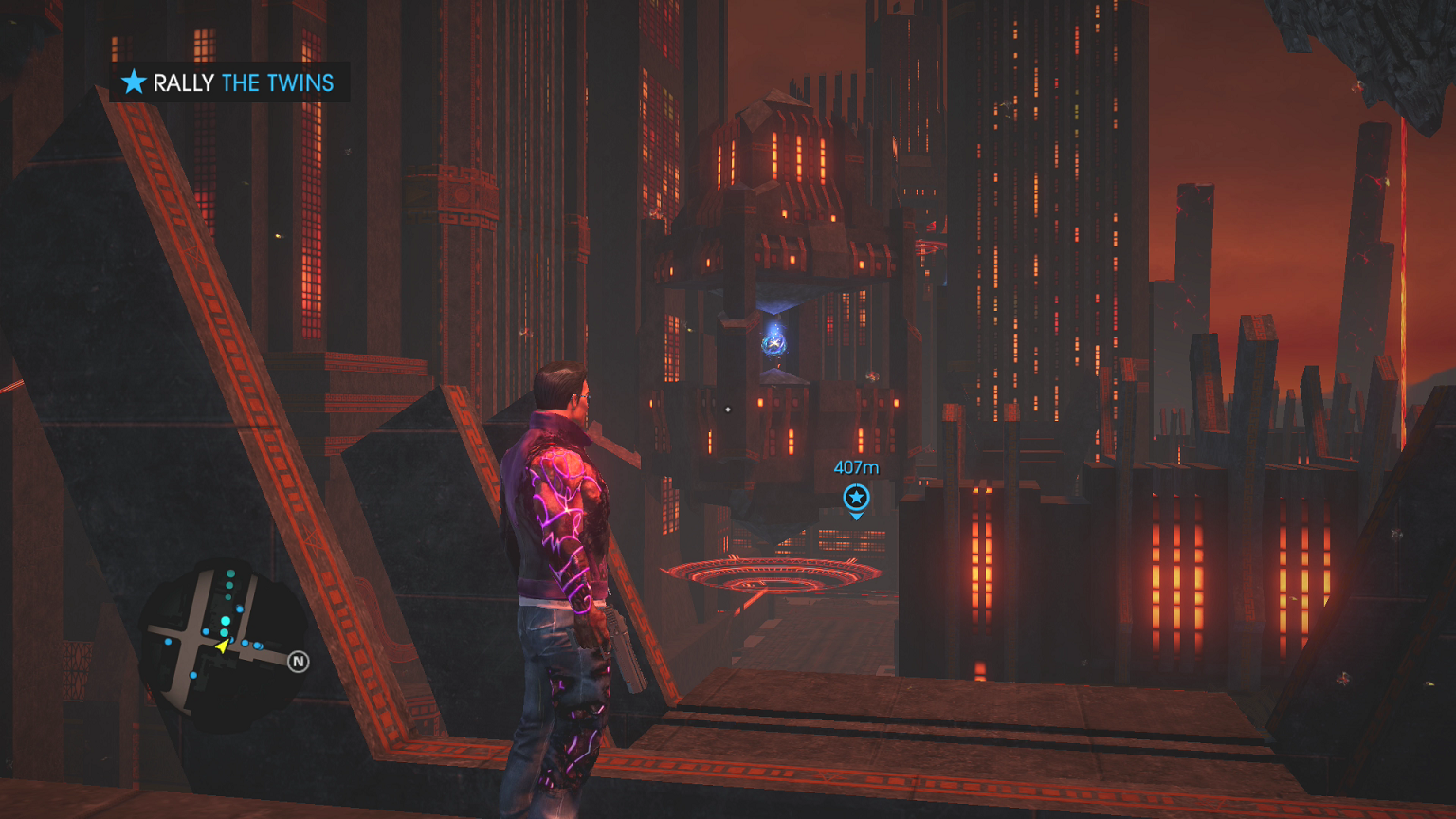 The brief campaign of 'Gat Out of Hell' is nonsense for the sake of nonsense, and that’s fine. It has the Saints boss being forcibly betrothed to the daughter of Satan, so of course Gat and Kinzie have to punch Satan in the face to save the boss. In order to get to the punching, they must complete activities scattered around Hell to irritate Satan and develop their powers. The storyline is connected closely enough to the side activities that they start to look the same, which is great because in any 'Saints Row' I can usually be found exploring the open world anyways, happily avoiding any commitment to the story. Some returning characters can be found, along with a few other Easter eggs and new weapons and vehicles. 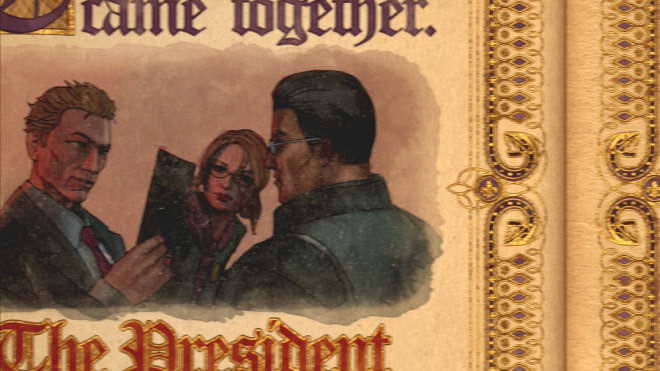 This isn’t really a remaster - it’s a straight port. It looked a lot like playing a 360 game on my One, which isn’t uncommon but still feels kind of sad. The character textures lack detail and they fuzz around the edges. Because much of the game is played within an unstable simulation (think 'The Matrix'), there are a lot of effects within the environment that can disguise video issues such as a late draw-in. The framerate issues, however, cannot be ignored. Drops in speed are common during combat or chases. 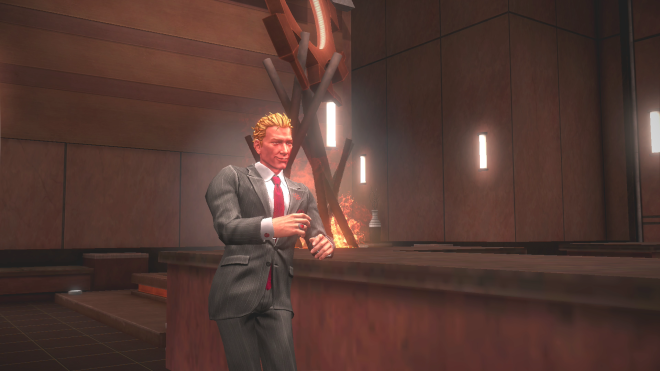 'Saints Row IV' has a decent and rather eclectic soundtrack. There’s a lot of dubstep and other electronica to pad up the party vibe, but there are also classical, pop, reggae, and retro stations with the likes of Biz Markie, Robert Palmer, Aerosmith, Haddaway, and more. The radio can be listened to even when not in a vehicle (a good design choice, considering how little most players will spend driving), and custom setlists can be built. The score is uptempo and catchy, and voice acting and sound effects are good. There are few audio problems besides the odd lip-syncing bug. 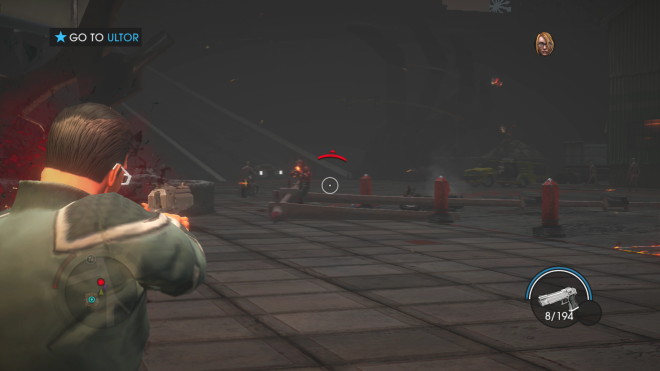 'Saints Row IV: Re-Elected' comes at a discount when compared to the release prices of its components, but that doesn’t change what it is. It is a conversion, plain and simple, with a few hours of added gameplay that doesn’t change much from the 'Saints Row IV' formula. There are some missed opportunities on the technical side that could have made for a smoother, prettier title. It is a good game and I can recommend it for newcomers, but returning players will find little of value unless they have dearly missed Johnny Gat.