The Game Itself
3.5 Stars
The Video: Sizing Up the Picture
5 Stars
The Audio: Rating the Sound
4 Stars
Replay Factor
2 Stars
Bottom Line
Worth a Look

Digital version reviewed on the Wii U.

First time indie developer, Nyamyam, describes 'Tengami' as 'an atmospheric adventure game, full of wonder and mystery, set in Japan of ancient dark fairy tales' that lets the player "explore a beautifully crafted pop-up book world, with an art style inspired by traditional Japanese arts and crafts." Initially released for iOS, it has since been ported over to PC, Mac and, most recently, the Wii U. Is it a game? Is it interactive art? Most importantly, is it worth your time and money?

Taking a cue from thatgamecompany and their hugely successful and critically acclaimed titles 'Journey', 'Flower', and 'Flow', 'Tengami' focuses more on the experience of playing the game, and significantly less on the challenge of playing the game. Designed as a point-and-click adventure, players direct the main character through the simple gesture of tapping the Wii U's gamepad screen. I preferred using the stylus, rather than my finger, and discovered that it delivered a more precise response.

However, it becomes clear very early on that 'Tengami' is not a game of precision. It is a game that encourages the player to sit back, relax, and interact with the rich and dreamlike atmosphere. Set in Feudal Japan, 'Tengami's' world is presented as a fully realized and wonderfully developed, real-time pop-up book; a design choice that provided my inner child with a happiness beyond describing. 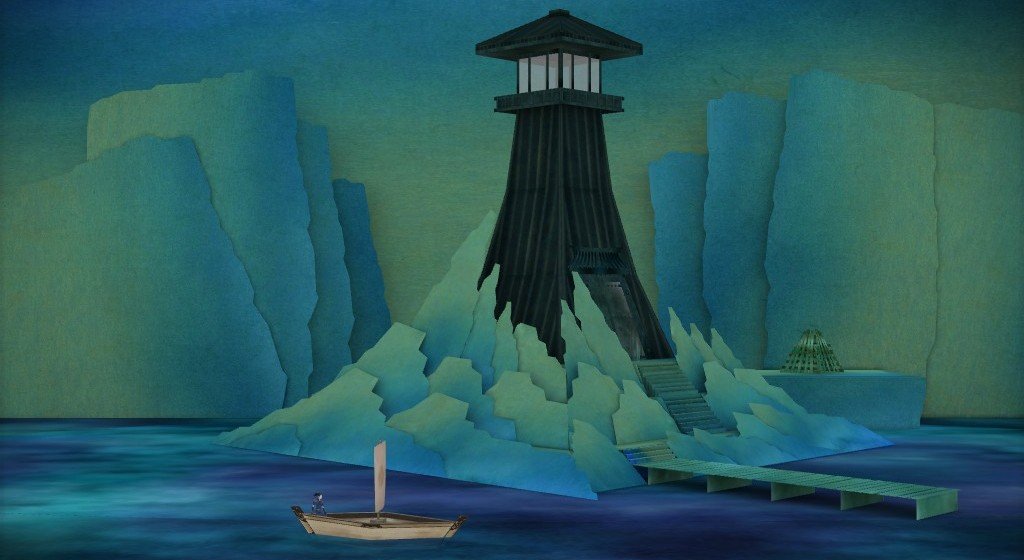 The first time I was prompted to flip the page - transforming the landscape and buildings before me - I was instantly transported back to my childhood and the immense love that I developed for this form of literature and storytelling. It was inspiring to see the amount of detail the developers at Nyamyam crafted into the story and I was just as pleased with the realization that a similar mechanic was incorporated into the variety of puzzles that made up the entirety of the game's challenges.

Manipulating specific points within the environment – as well as in and around a variety of structures – allows the controlled character to progress further along his journey to bring life back to a metaphorical cherry blossom tree. A journey that will take him across land, sea, and mountaintops. A journey that is both inspiring to witness, and refreshing to experience. 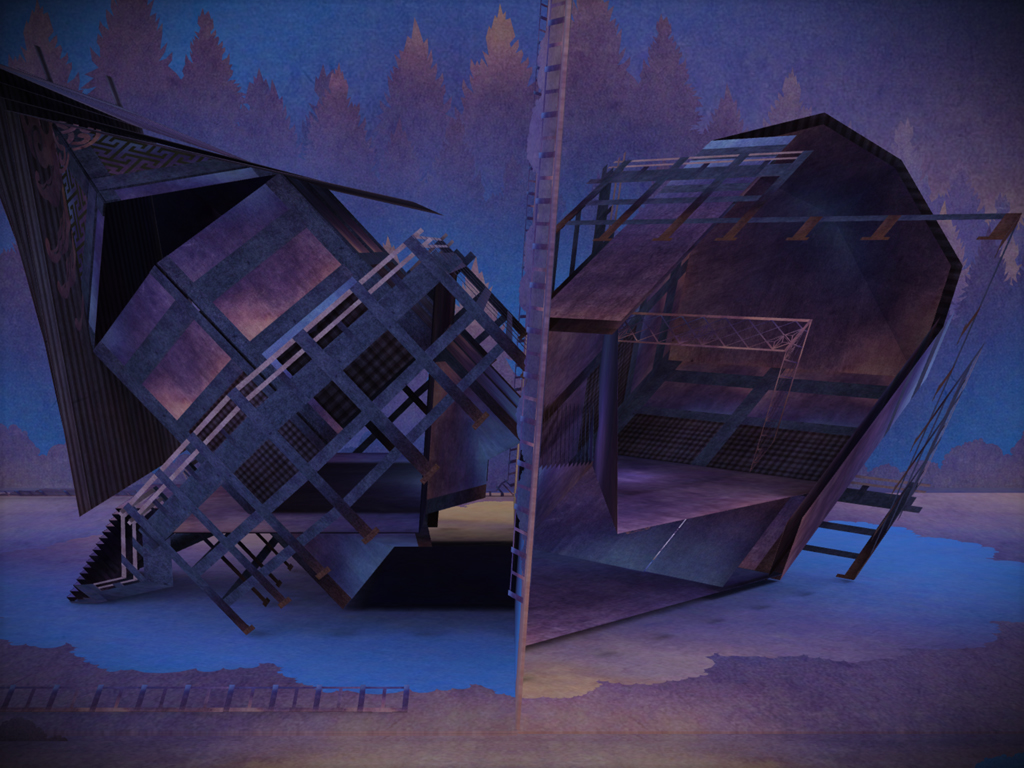 'Tengami' is played entirely on the Wii U gamepad. And while the same images are reflected on the television, I recommend playing the game exclusively on the smaller screen with a nice pair of headphones connected. It is an experience that demands a more intimate set-up. Although this prohibits others from helping with the puzzles (it's ok, you won't really need any help), this recommendation provides the greatest amount of satisfaction during this brief, single-sitting game.

And game length is really the only criticism that I have with 'Tengami', especially considering that the same experience can be had on the iPad – providing a higher resolution than the Wii U gamepad – for a fraction of the cost. While I was tempted to break up the experience and spread it out over additional play sessions, 'Tengami' was already done and over with by the time the thought even occurred to me. I generally don't judge a game based on the ratio of time devoted and money spent. I was sad to see the credits run so quickly after starting the game (maybe 90 minutes in total), but acknowledge that this as a desire to continue the experience. 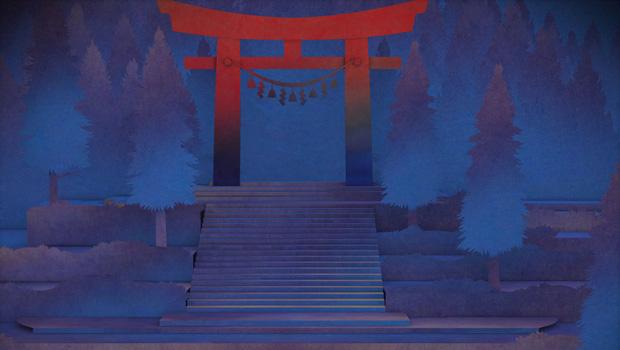 The true highlight of 'Tengami' is undoubtedly the visual presentation and the aesthetic that it achieves. The paper craft theme provides everything on screen with a crisp, clean look. The main character takes on the weight and solidity that is as thin as a sheet of construction paper. When turned sideways he practically disappears from sight.

The amount of detail included across the variety of landscapes is also quite impressive. Snow gently falling from the sky, leaves blowing in the wind, even minute ripples that form in the water when traversing a small lake, everything has been meticulously accounted for. The artists at Nyamyam should be proud of their accomplishments. 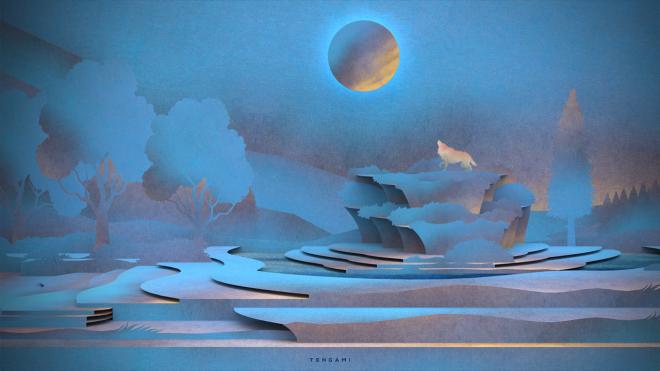 Composed by David Wise, most recognized for his contributions to the 'Donkey Kong Country Series', the soundtrack for 'Tengami' provides a near perfect blend of modern and Japanese instruments and further delivers a mood that is idyllic, soothing, and tranquil. It may be worth playing through 'Tengami' just to experience this audio bliss. Additionally, fans of this score have the opportunity to purchase the complete soundtrack from iTunes, Amazon MP3, and a variety of other stores as a digital download. Although it's rare that I add game music to my collection, this one has me seriously considering doing so.

Between 'Tengami's' brief gameplay experience, and the fact that the handful of puzzles are rather simple and basic, the need to revisit this world is fairly low. However, after completing the game, I immediately recommended it to my wife, advising that it was something she 'needs to experience'. Would I consider replaying 'Tengami' a second time? Probably not. Would I sit with my wife as she experiences it for the first time? Absolutely! 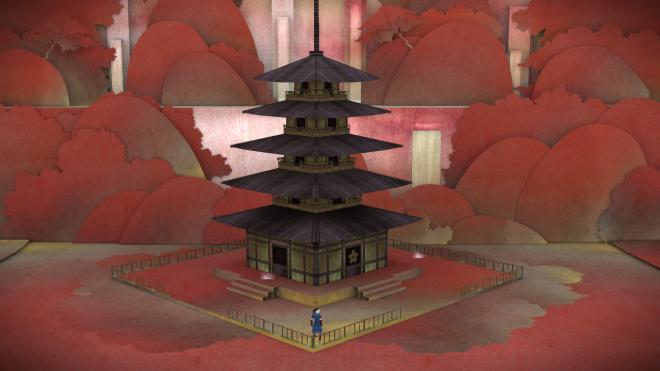 'Tengami' is not a game for everyone. Although beautiful in its presentation, its basic controls, simplistic puzzles, and short experience may turn off a great many hard core gamers. Those looking for a unique game that results in a calm and relaxing experience need look no further. The fond memories it brought back from my childhood, combined with the lovingly detailed visuals and wonderful musical score, was exactly what I needed at that exact time. It's most certainly worth taking a look at, but ultimately I would suggest giving 'Tengami' a try on the iPad. The end result will be the same but come with a reduced price point and even better looking tablet screen visuals.