The Game Itself
5 Stars
The Video: Sizing Up the Picture
3.5 Stars
The Audio: Rating the Sound
4 Stars
Replay Factor
4.5 Stars
Bottom Line
Must Own

This War of Mine

PC version reviewed. Review was conducted using the Steam version after patch 1.2 was implemented in December, which purportedly fixed a lot of bugs and balancing issues.

11 bit studio’s 'This War of Mine' is based on the Siege of Sarajevo, a four-year blockade of the city during the Bosnian War in in the early 1990s. During that time, most residents of Sarajevo were unable to flee or receive supplies from outside, making it a kind of post-apocalyptic prison. Snipers fired on civilians who ventured outside, a barter system replaced currency, murder, rape, robbery, and other crimes were common, and hundreds of mortar shells per day slowly whittled down the city’s infrastructure.

Each playthrough of 'This War of Mine' had me taking control of a handful of survivors who banded together in a decrepit building in the city of Pogoren. Civil war has just begun in the country of Ulraznavia, and those who did not flee Pogoren in the first few days have become trapped. Supplies have dwindled to nothing and the only store in operation is the black market. Each day, which lasts about 10 minutes in real-time, has my survivors hunkered down in their base while snipers survey the streets, preventing them from leaving. At night a single scavenger from the group can explore the ruined city while the rest remain at home to guard their meager possessions.

This game is bleak, and it is sad, and it often seems hopeless. These people are civilians - a teacher, an athlete, a chef. They have skills that can help their cause, but with only one exception, none of them are fighters. They sneak and they scrounge and they barter, and sometimes they fail and get hurt or fall ill. When this happens, the already precarious living situation deteriorates almost completely. Injured or sick survivors need medicine and a few days of rest to recover, neither of which I could afford them. In truly desperate times, when I had no other choice, I would send a survivor into a lightly defended home in the city with a knife and I would rob the inhabitants blind. If they discovered me, I killed them with the knife. What choice did I have? Without their medicine, Pavle would die from his wounds. 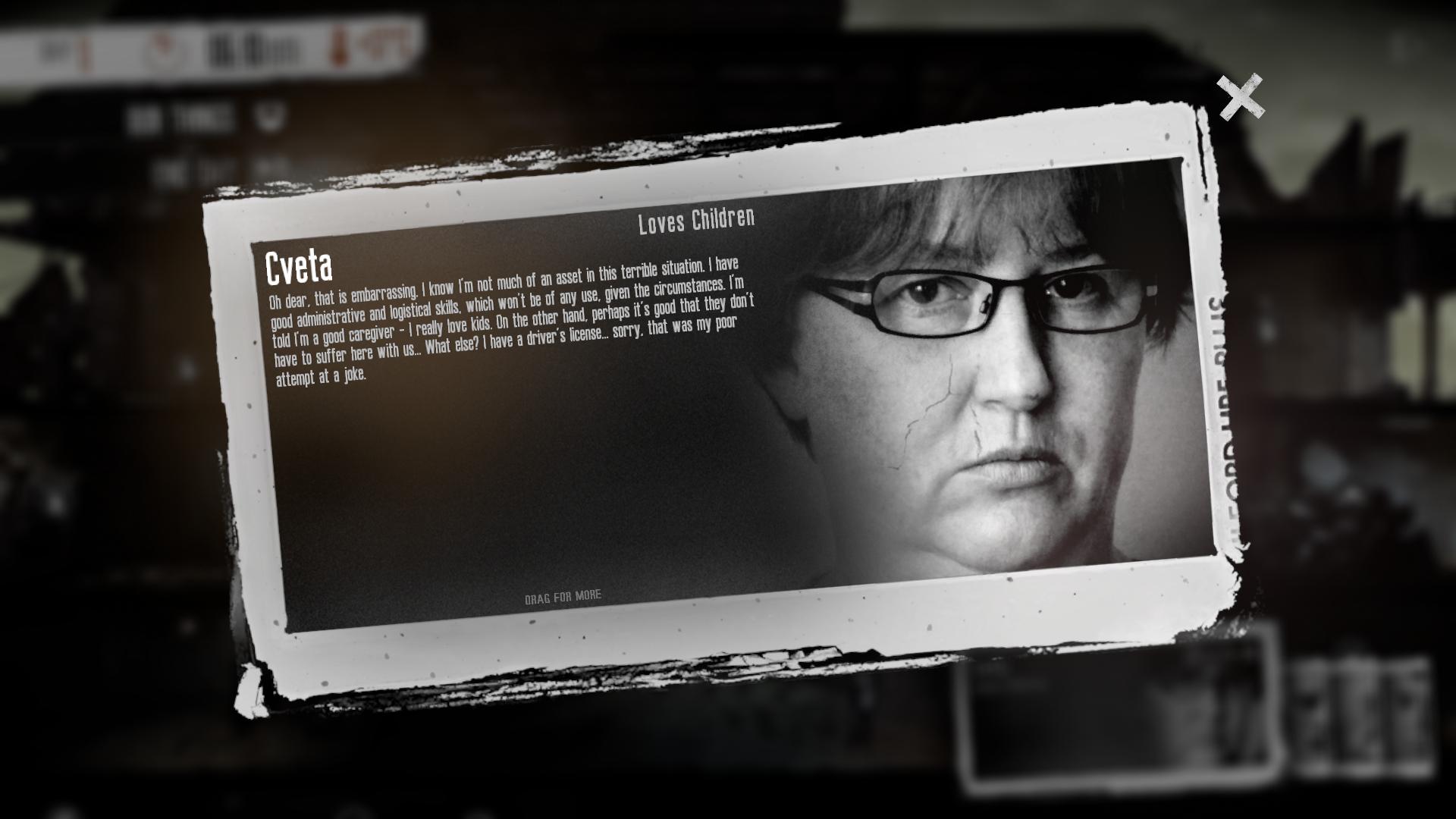 It’s this climate of moral conundrum that makes 'This War of Mine' so compelling. There are no checkpoint restarts, so choices are more or less final unless I want to close the client and lose an in-game day’s worth of progress. As they commit heinous acts, survivors become increasingly despondent. Sadness is a sliding attribute like hunger or fatigue, and the more depressed they become, the more likely the chance of suicide. This prevents players from becoming murderous scumbags, as their households will soon perish from despair, even if they manage to collect a bevy of valuable goods.

But sometimes crime is a necessity. In one of the darker moments, when we were all starving and hurt, I murdered an elderly couple who had accumulated a great deal of medical supplies for the wife’s health problems. I left their bodies in the basement while I ransacked the house. My scavenger was sad for a few days, but some cigarettes, music, and reassurance from his friends helped him cope.

There are moments of humanity as well. During an outing in sniper alley, I discovered a man who had been injured by the sniper and had dragged himself behind some rubble. As I approached, he begged me to open a sewer grate so he could return to his boy in a nearby tenement. His wound meant two things: he could be easily dispatched to search his body, and that the tenement would be less defended when I eventually made my way over there. Instead, I ran the rest of the way across the alley to open the sewer and together we made our way back to his child, who was just an infant. They evacuated and left a sizeable windfall behind for me, but I would have done it for free.

If I could survive the first few weeks of the siege without too many injuries or nighttime raids, I could begin to develop a source of income. Cigarettes, medicine, bandages, and alcohol of varying quality can all be crafted via workstations, and they are extremely valuable in the black market. Every few days a trader would knock on my door, and I would sell him whatever moonshine or rolled-up cigarettes I had accumulated in return for food and materials. Workstations can be upgraded to allow for higher quality weapons and commodities, and the further up I went in the value chain, the less pressure was put on my nightly scavenging.

The game is completely two-dimensional. All environments are presented in a cut-away side view, like an ant farm. While sneaking, strangers in other rooms are blurred, instead depicted by pulsating red circles. Almost all color is washed out, leaving a visual motif just as bleak as the game’s theme, and very effective at conveying the underlying hopelessness. Backgrounds have a sketchy, penciled-in look. Textures are not terribly advanced, but character animations are decent. Only a few glitches intrude into gameplay, and they are minor. 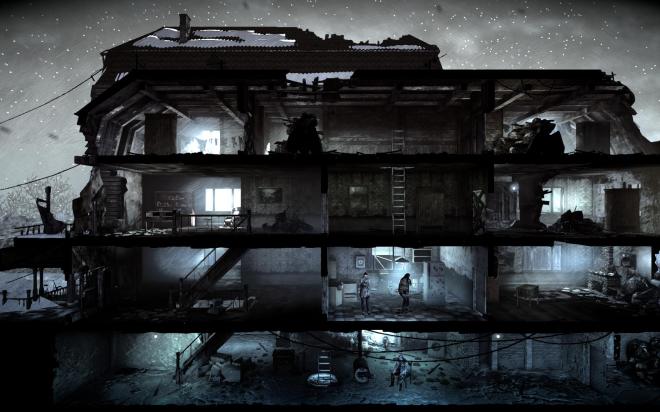 'This War of Mine' has no voice acting. All interactions are presented by text boxes above a character’s head, like in a comic book. The understated sound effects are nonetheless powerful, from the soft staccato of distant mortars to the zinging whine of a sniper’s bullets. The music is suitably forlorn, although there are two radio stations with a limited track list that can bolster the survivors’ spirits (and my own, I’m not ashamed to admit).

At first only one arrangement of survivors was available, but as I became better at not dying, more new game options opened up. There are around a dozen survivors that are laid out in three- to four-person rosters, and with each game I could try something new. Beware, some of the playthroughs begin in winter, which adds a higher difficulty level. 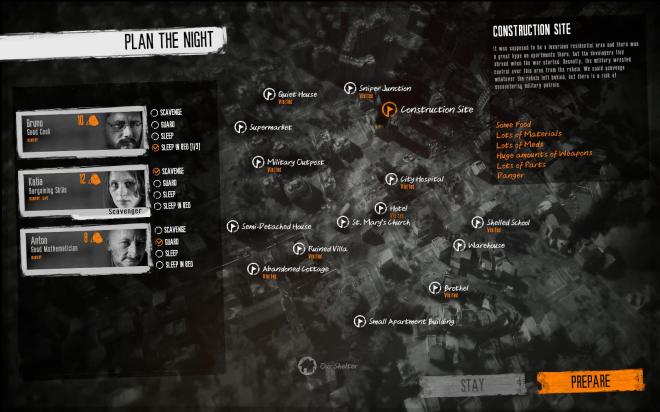 'This War of Mine' is one of the best PC releases I’ve played from 2014. It is not empowering like other games. It’s very difficult, and the first couple of playthroughs especially can be frustrating. It’s also poignant and lets players tell their own stories without a heavy script or distracting voice acting. It might make you sad, but it’s worth experiencing.