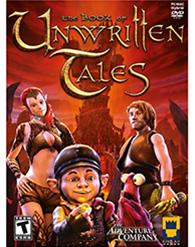 The Game Itself
4 Stars
The Video: Sizing Up the Picture
4 Stars
The Audio: Rating the Sound
4 Stars
Replay Factor
2 Stars
Bottom Line
Recommended

The Book of Unwritten Tales

'The Book of Unwritten Tales' is an old-fashioned adventure game from German indie studio KING Art. It is set in a fantasy world rife with spoofs and jokes. It’s far more similar to the 90s adventure titles from LucasArts than the more recent stuff from Telltale games. (It's also a much-better known series outisde of the US.)

'The Book of Unwritten Tales' (or 'BoUT') is a slower-paced, deliberate, intimate adventure game. Emphasis is put on getting to know each player character as they wander around an environment, clicking on things, thinking aloud, and making conversation. Each scene has the player looking for items to put together to solve puzzles. The scenes can stretch out to be quite long, but that’s ok as this is a no-pressure, no-lose situation. I was content to aimlessly wander each map, collecting bits of junk and clicking on everything I could to see what would happen. 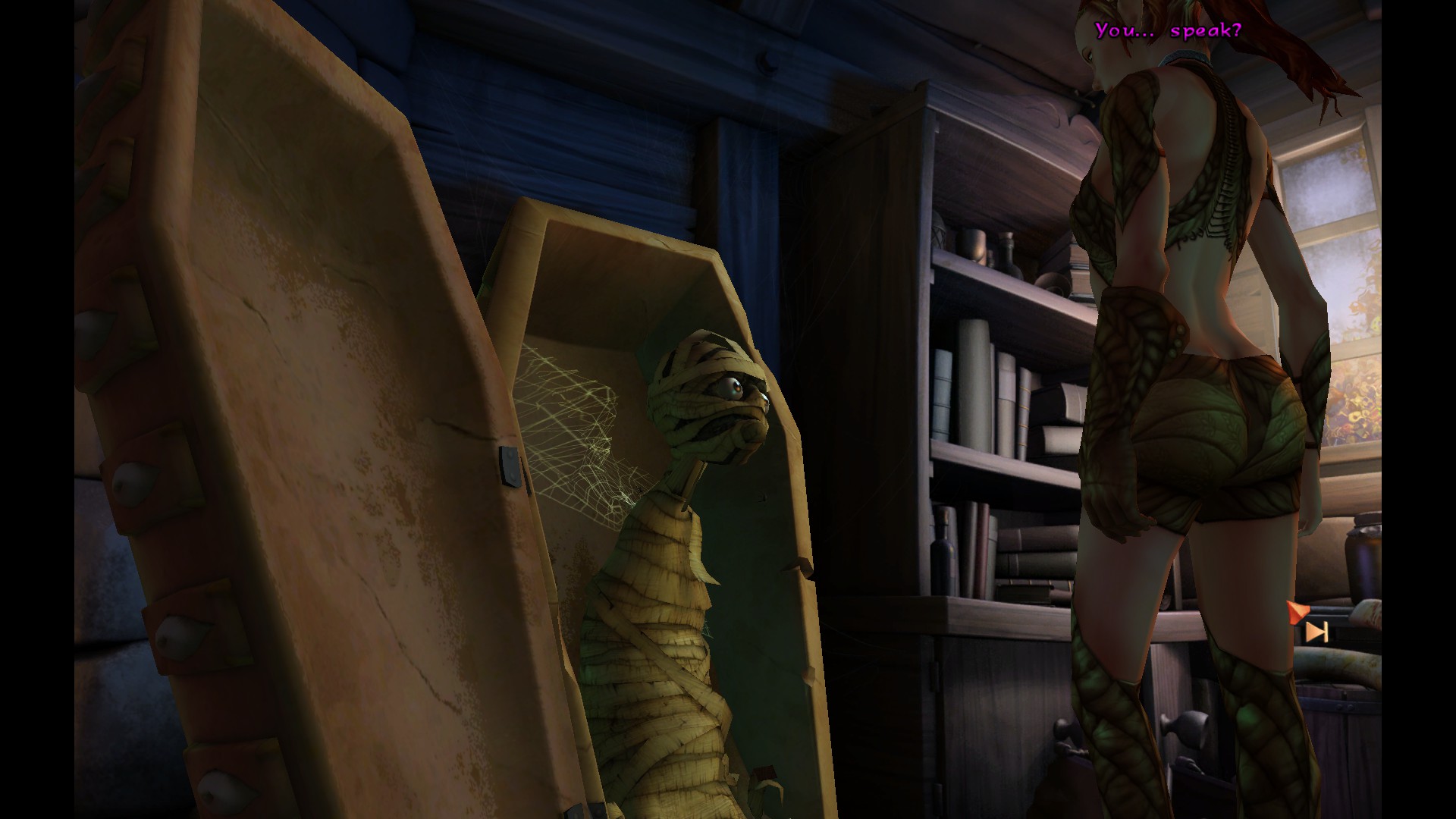 It might not sound glamorous or exciting, and it’s neither of those things. It is whimsical and droll, though. It has personality in spades. The pop culture references are frequent and smart if not always subtle, and the other jokes are often good for a giggle.

The country that 'BoUT' is set in is engaged in a seemingly eternal civil war between orcs and pretty much everyone else, including humans, dwarves, elves, and gnomes. A wizened old gremlin, named MacGuffin of course, discovers an artifact powerful enough to end the war. He is quickly captured by the bad guys, but not before he comes into contact with Ivo and Wilbur, a disinterested elf and lowly gnome with delusions of grandeur, respectively. The two go on to meet the self-absorbed Nathaniel and the aptly named Critter, and the foursome go on a grand adventure to recover MacGuffin’s MacGuffin and save the world. 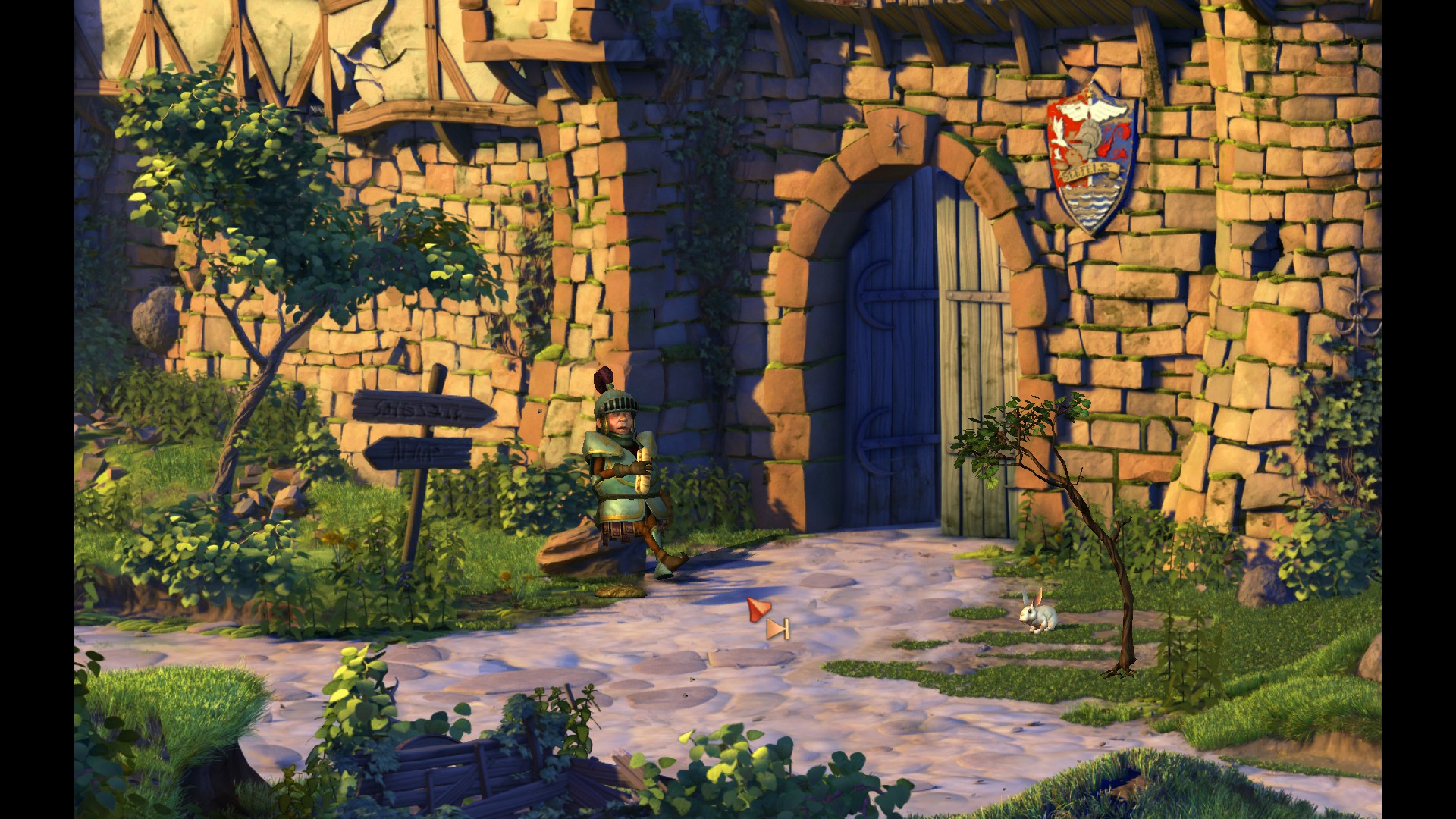 Wilbur in particular is great fun - he is innocent to the point of naive, yet still suspects when someone is trying to pull a con on him. Ivo, the flamboyantly-dressed wood elf, is a good person who tries to stay out of the lowly affairs of mortals, and is not above lying to get her way. The self-aware script frequently pokes fun at longstanding epics like 'Lord of the Rings', other video games (one of the first missions is to destroy a rat), and the trope-filled fantasy genre in general. 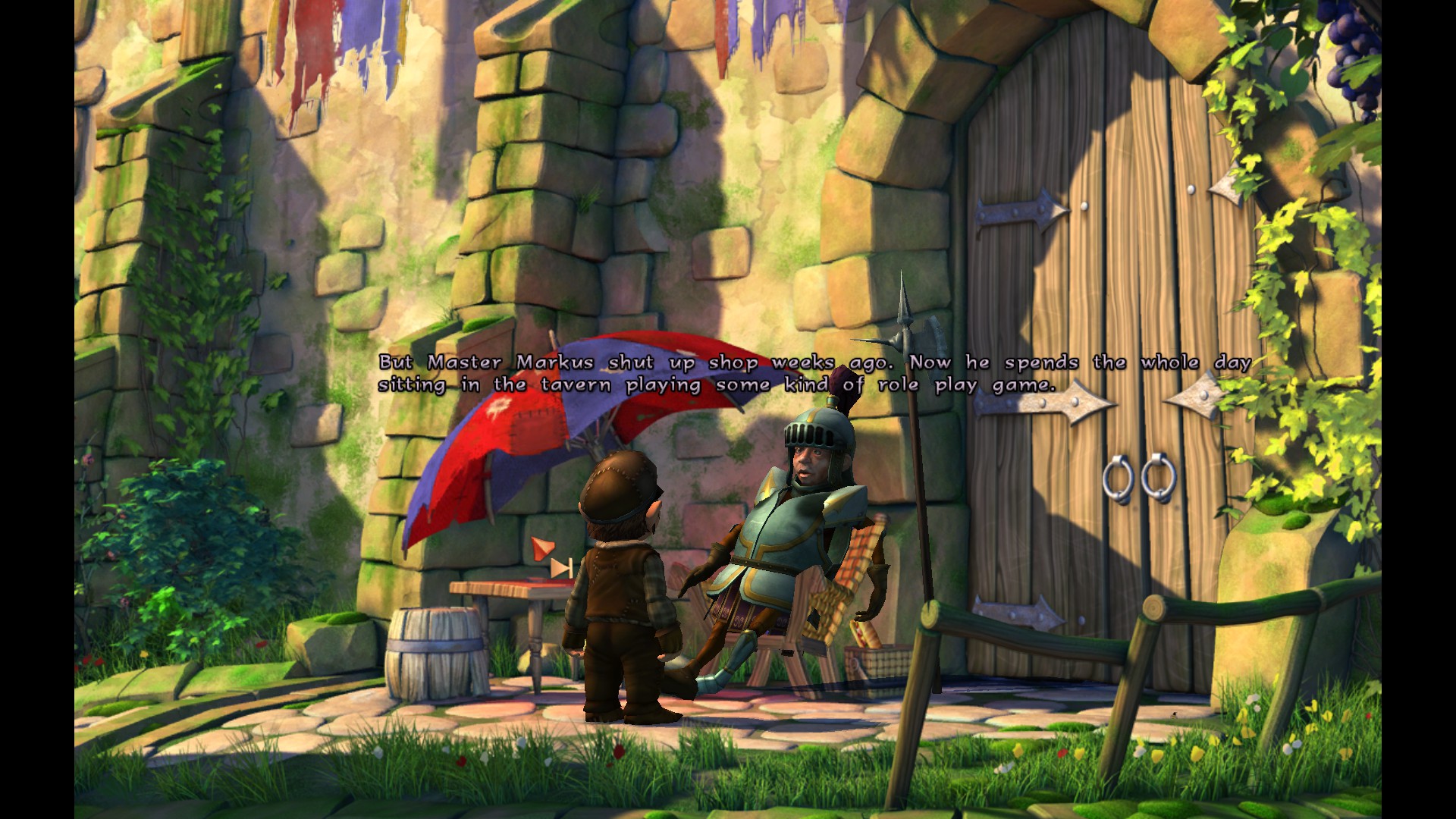 To progress through the story, the player must solve puzzles. A few of these puzzles are kind of opaque, but most are intuitive or can be worked through by brute force (clicking on various things until the solution presents itself). One scene had me disrupting a primitive MMO game so that I could speak to one of its players who was distracted. Being stereotypical MMO players, I had to interfere with the "server" (a monkey pulling on levers) several times, with the players complaining after each incident, until they finally became exasperated and walked away. 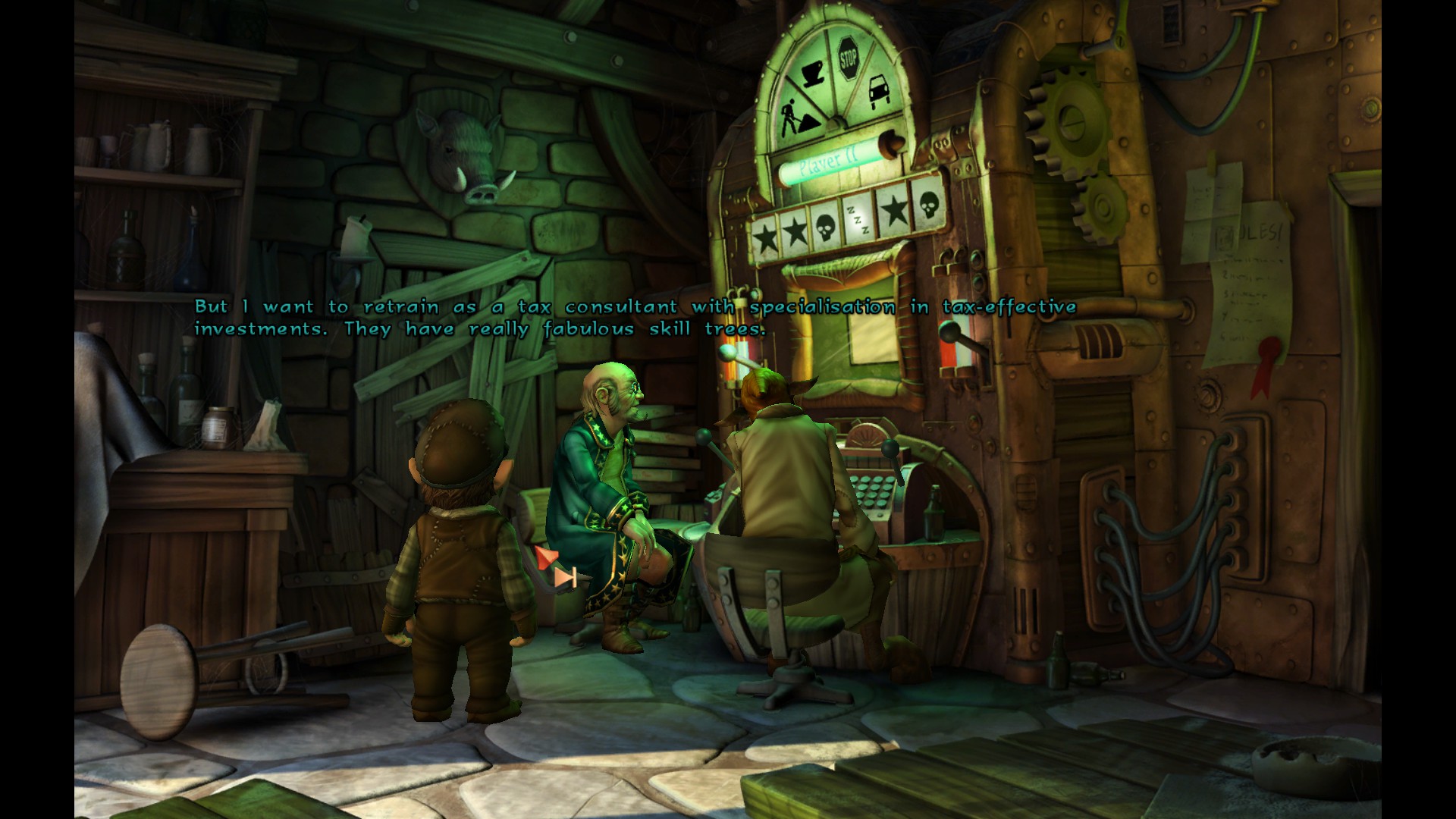 Even though the game doesn’t take itself too seriously, the narrative holds itself together well. The main characters are likeable, and playfully question all of the weird things they discover, much of which is humorously out of place in a high fantasy world. The supporting cast is equally charming, from the whiney villain to the Monte Python-inspired town guard to the senile mummy.

The few problems in the formula stem from the level design. Objects of interest are sometimes hidden behind other items or characters, or look like the background. Sometimes they are so far in the foreground they are hardly recognizable. Many objects have to be clicked on and explained several times before they are actually collected or used. In the grand scheme of things, these are not egregious issues. 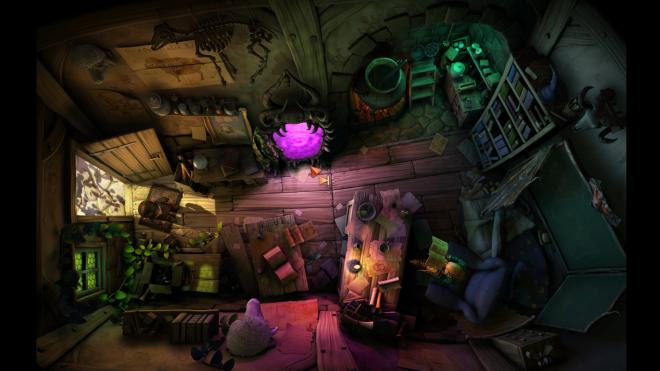 'BoUT' is an older game, but still looks nice. Character models are moderately detailed and their animations expressive (although not immune from the occasional twitch), and the backgrounds, while static, are rich and pretty. Overall, the color lends the game a storybook effect, which, oddly enough, is a welcome distinction from the browns embraced by many games. The game on the whole runs fine, although sometimes it has trouble starting up from Steam.

Almost all of the interactions in 'BoUT' are voiced, down to the least important side characters. The acting is often as good as the writing, and the characters drip with wry humor. Outside of conversation the game is quiet, with sporadic sound effects playing whenever the player clicks on certain items.

Much of the fun in this game comes from the jokes and, to a lesser extent, the puzzles. Experiencing them a second time can dilute their effect, although a second playthrough may yield things that were missed the first time. 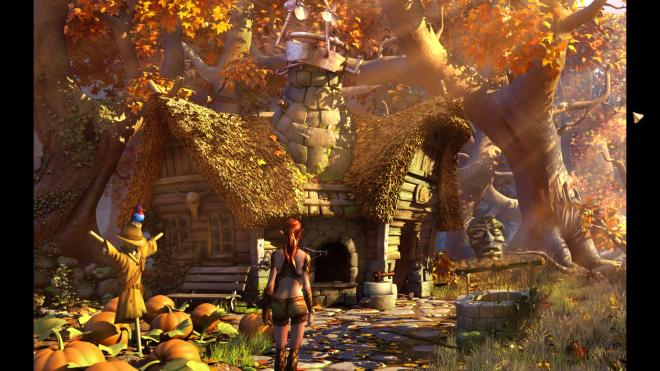 'The Book of Unwritten Tales' is a funny and endearing experience. It uses stock fantasy and adventure game conventions while simultaneously subverting them for its satire. It’s a bit slow, and not all of the puzzles are winners, but every adventure fan should try this out.