Back in 2009, Failbetter Games’ burst onto the scene with 'Fallen London,' an eponymous browser game. Unlike most browser games, which closely mirror mobile games in that they are typically simple, repetitive, and shamelessly promote microtransactions, 'Fallen London' was steeped in carefully written story and a deep, resonant background lore. A prequel browser game was released in 2012 ('Silver Tree'). In 2013, Failbetter was successful at completing a Kickstarter campaign to fund a new 'Fallen London' project, a Steam title called 'Sunless Sea.' The new game promised "discovery, loneliness, and frequent death," as well as a dynamic that would see the player enter madness and cannibalism in a Victorian Gothic Setting. From such promising beginnings, 'Sunless Sea' entered Early Access in July of 2014. Now, Early Access has ended.

The 'Fallen London' universe is one of the most interesting and odd settings I have experienced in gaming. Its inspirations are numerous and easily recognizable: steampunk, the Cthulhu mythos and other works of Lovecraft, Edgar Allen Poe, 'Don’t Starve', choose-your-own-adventure books, and gothic fiction, to name a few. That universe begins in the 1850s, when London was suddenly transported by bats beneath the mantle of the world into a massive and hellish subterranean lake known as the Unterzee. 'Sunless Sea' takes place thirty years later, when the city has fully assimilated into the underworld. Getting to the surface is still possible from certain places, at considerable expense. 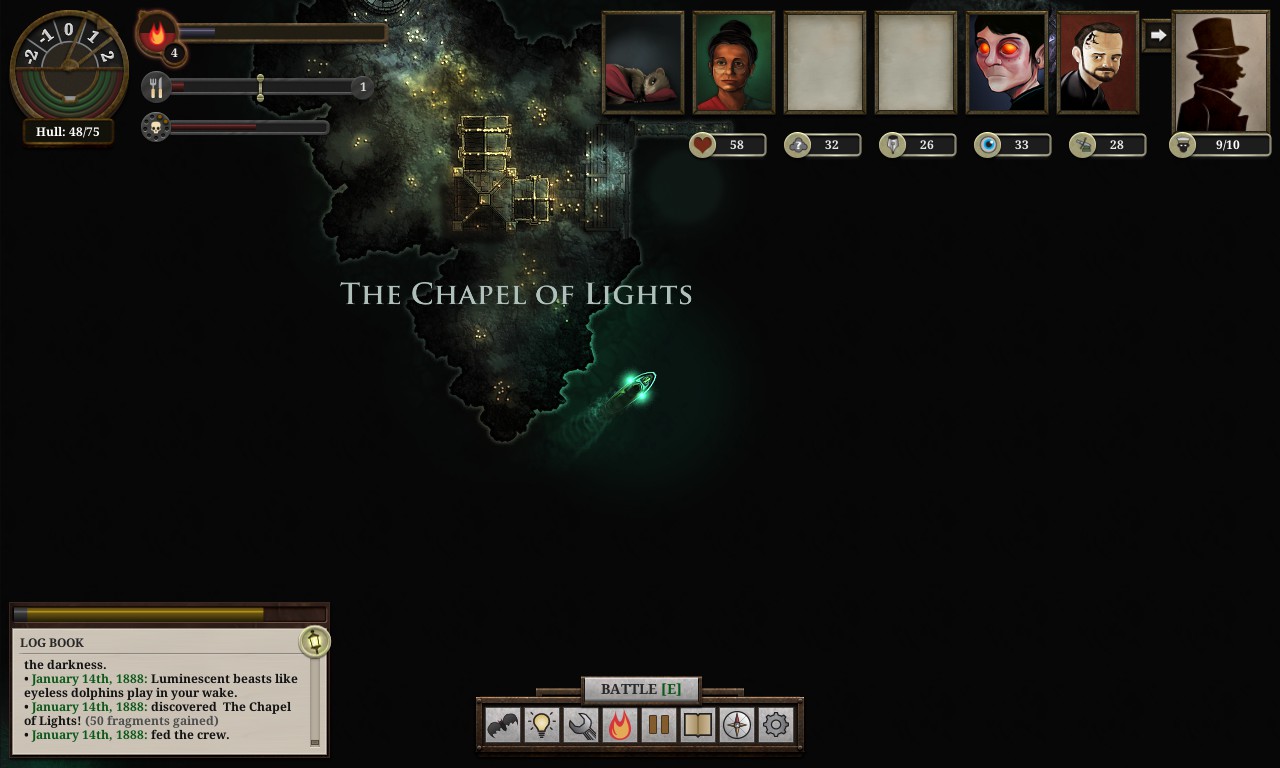 Dotting the Zee in endless amounts are islands, and on these islands are towns, settlements, trading posts, cemeteries, combination shrine/slave camps, seaweed mazes, and all other manner of strange and wondrous thing. The player character is a Zee Captain who makes their living exploring the water and islands in a humble steampowered vessel. They are accompanied by a generic crew and a few unique officers who offer stat bonuses and can be upgraded and interacted with by the captain. Each playthrough is different, with fresh choices, characters and stories frequently injected by Failbetter. The Zee is procedurally generated to a degree; there are similarities in each chart, but outside of the home waters of London, the northern crypts of Venderbight, and the nearby Hunter’s Keep, much of the world will change with each playthrough.

The Zee is a dangerous place. Fuel and food are constantly draining resources that must be frequently replenished to avoid undesirable or ghastly consequences. Crewmembers can be lost during fights with aggressive Zee denizens like mechanized sharks, mutated mantas, and garden variety pirates. Repairing the hull is extremely costly. Like any good roguelike, it is usually not possible to have everything I need. In between trips to the harbor of London I am usually missing something crucial, and I pray to the Zeegods that the wheels don’t fall off before the next time I make port. On one occasion I ran into a huge nest of giant crabs, and, after killing a half-dozen at significant damage to my hull, I overheated my engines to get enough speed to escape. This of course depleted my fuel stores, and I was forced to pay an opportunistic tugboat captain to haul me back to London. Death is frequent, encouraged, and not the end of the world. Certain perks can be carried over into the next playthrough, depending on the state of the dead captain’s will. 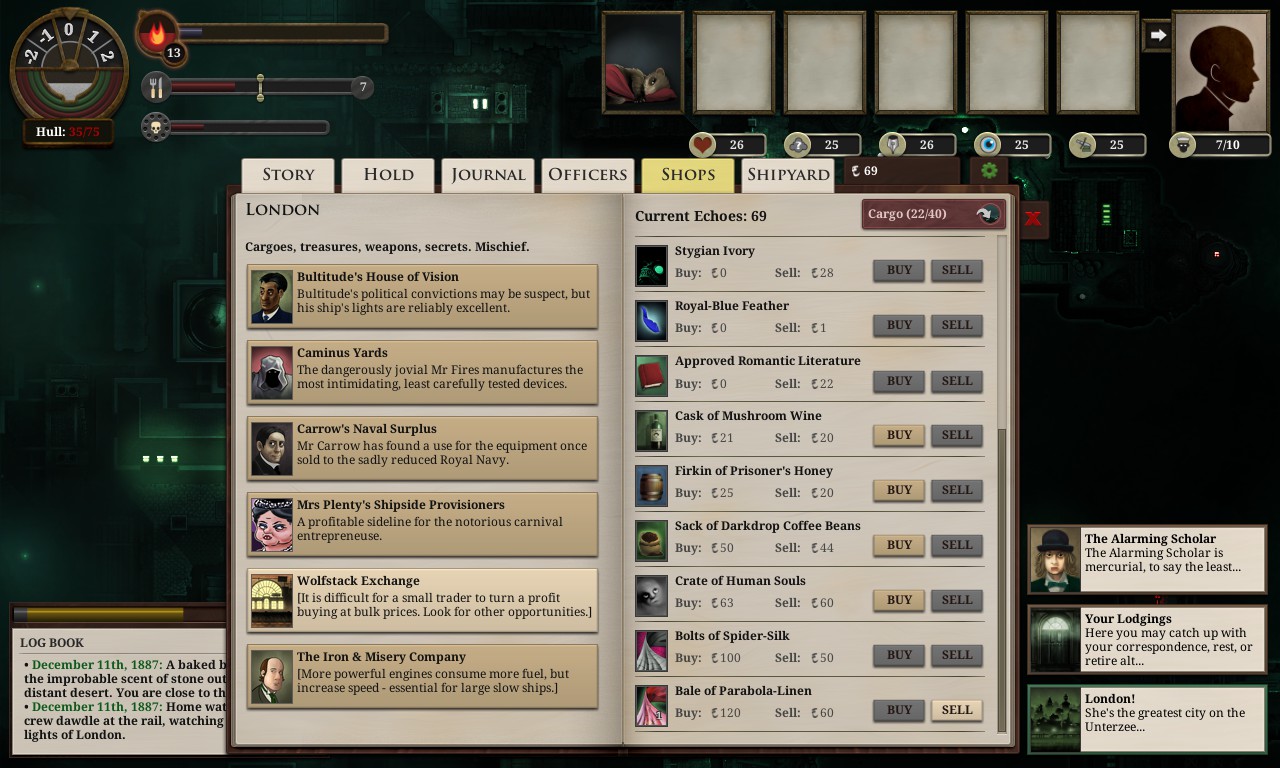 Much of the UI is presented as a book that the player flips through while on the sea or in port. The info is in text form, and the player selects their actions from a menu. While docked or not otherwise exploring, this is when 'Sunless Sea' most resembles its browser game parent. The writing is anachronistic, vague, confusing, and eerily beautiful, much like the rest of 'Sunless Sea'. As the captain, I defeated salty Zee monsters, researched and conducted trading routes between colonies, and most importantly, explored. Discovering new locations and mapping the Zee is how the captain levels up. These levels can be sold off for currency, unlock certain merchants, or upgrade my officers. 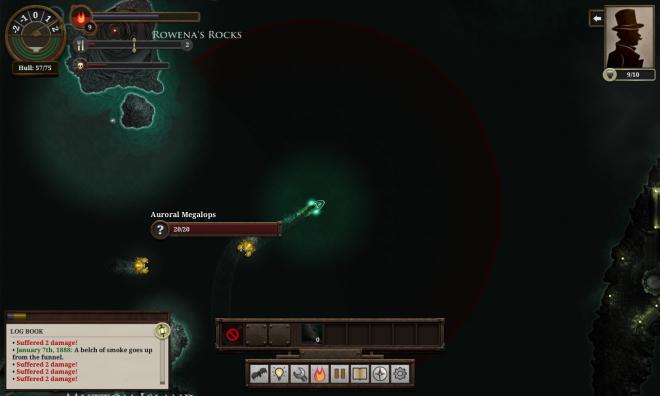 'Sunless Sea' is very dark, fitting for a setting that is completely subterranean. Light can be used by the captain to stave off terror, but also attracts monsters and pirates. In general, visual effects and textures are of a middling quality, even on the highest graphics settings (although they have been improved considerably since the Kickstarter). Hand-drawn cards are used to depict characters and locations, and these are often very pretty. The controls can be sluggish and will occasionally fade out, requiring a button release and repress before the steamship will move again. 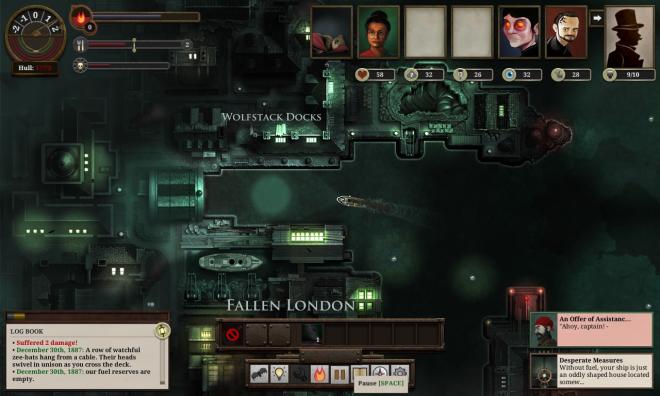 The game is not voiced; all communication is conveyed via text and punctuated by the occasional sound effect. The music is creepy and alternates between gothic and something else I can’t quite identify but might haunt me in my sleep. The Zee for the most part is silent, but the intermittent bell, moan, or splash can be heard in the distance. It imparts a lonesome, bleak feeling that helps compound Fallen London as a desolate, hopeless place.

'Sunless Sea' is the rare roguelike that rewards replays somewhat generously. The procedural map makes me want to jump right in again and explore the Zee every time I die, and the ability to carry over my chart, my money, officers, or other sundries (not everything of course) makes the death easier to swallow. Failbetter also frequently uploads new content into the game with quick, free downloads, further diversifying their content. 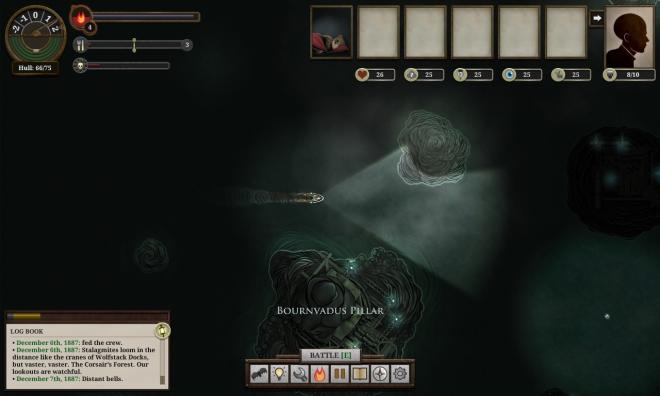 'Sunless Sea' is the perfect game for someone who’s been waiting for a subterranean, steampunk, nautical, difficult, heavily text-based adventure. I highly recommend it for everyone else as well, especially those who appreciate deliciously whimsical, macabre prose and don’t mind a bit of backtracking and dying.