The Game Itself
3 Stars
The Video: Sizing Up the Picture
3 Stars
The Audio: Rating the Sound
3 Stars
Replay Factor
3.5 Stars
Bottom Line
Worth a Look

'The Escapists' comes to us from Mouldy Toof Studios ('Spud’s Quest') and the ancient indie company Team17 ('Worms', among many others). With 'The Escapists,' Team17 may be signaling that the company has some serious publishing aspirations. 'The Escapists' is the rare game about prison, with a retro vibe and elements of the ever-popular roguelike.

This is a game about escaping from prison. Or rather, prisons. Each level is a penal facility, and they become more difficult as the previous one is cracked. The first level is an idyllic barely-prison where the guards offer hugs and there is plenty of unmonitored free time. The later prisons become diabolical nightmares, with cameras, more guards, electrified underground fences, and more. There's probably some off-shoot of Sisyphus in the ever lengthening escape routes, but it may have more to do with the daily grind of prison life. 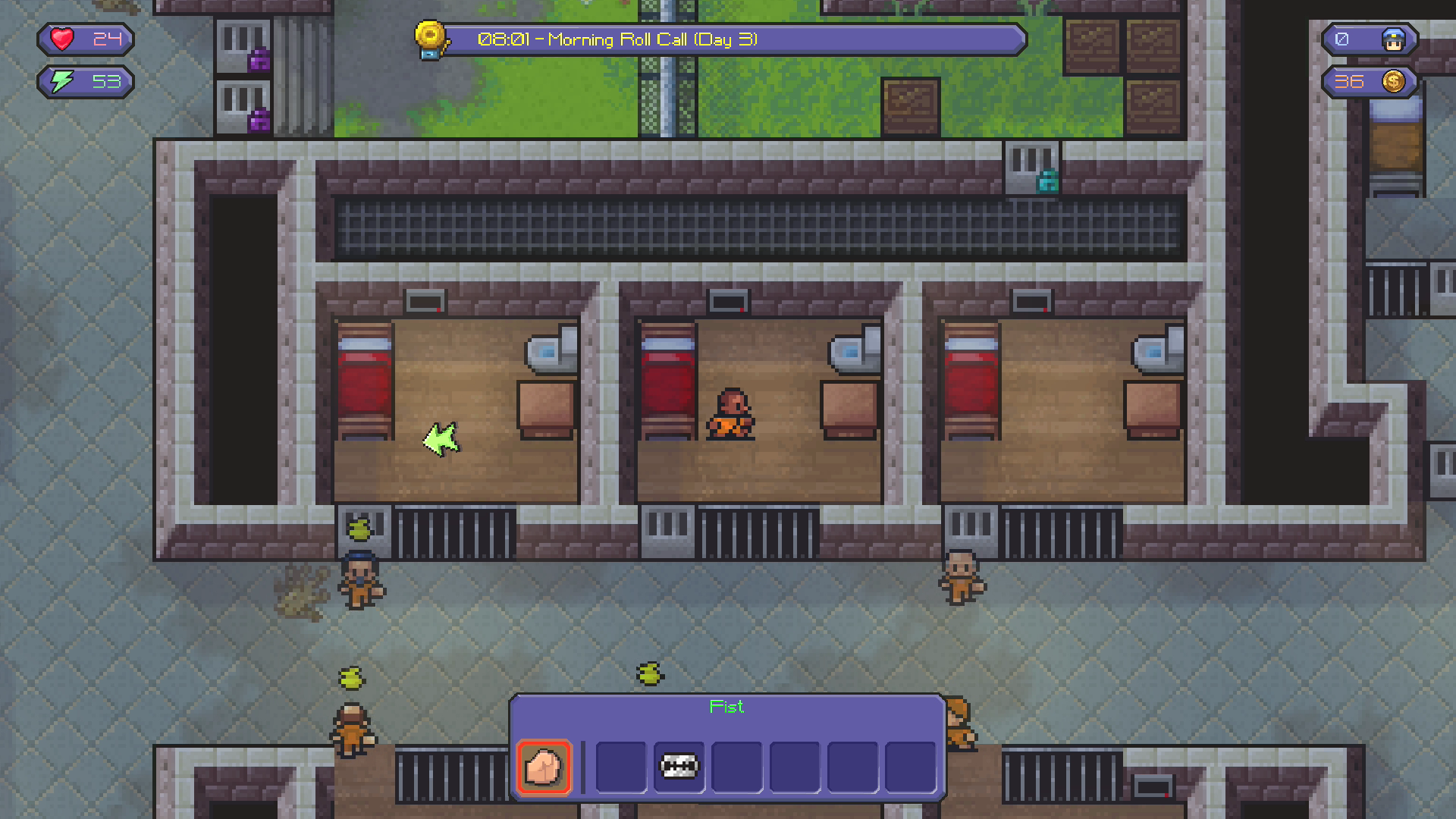 The game’s brief tutorial soon explained to me that prison life is dependent on routine. I nodded in agreement, as this aligns with every TV show and movie I have seen on the subject of prison, which of course makes me an expert. Like any good escapee, my first task was to memorize the schedule of the prison, down to the last guard and inmate. This can be troublesome, as everyone scuttles around at top speed in seemingly random directions. The only opportunities I had for trading with or beating other inmates were during meals, roll call, and yes, shower time. Don’t laugh - a lot of serious business happens in the shower.

Escape is not possible without tools. These tools can be bartered with or stolen from other inmates, or crafted from smaller and easier to obtain (not to mention less risky) components. The guards will interfere when they can. Misbehaving can lead to an increased risk of "random" searches, confiscation of collected supplies, and beat downs. Being on the receiving end of a beat down means a trip to the infirmary and loss of any contraband on my person. 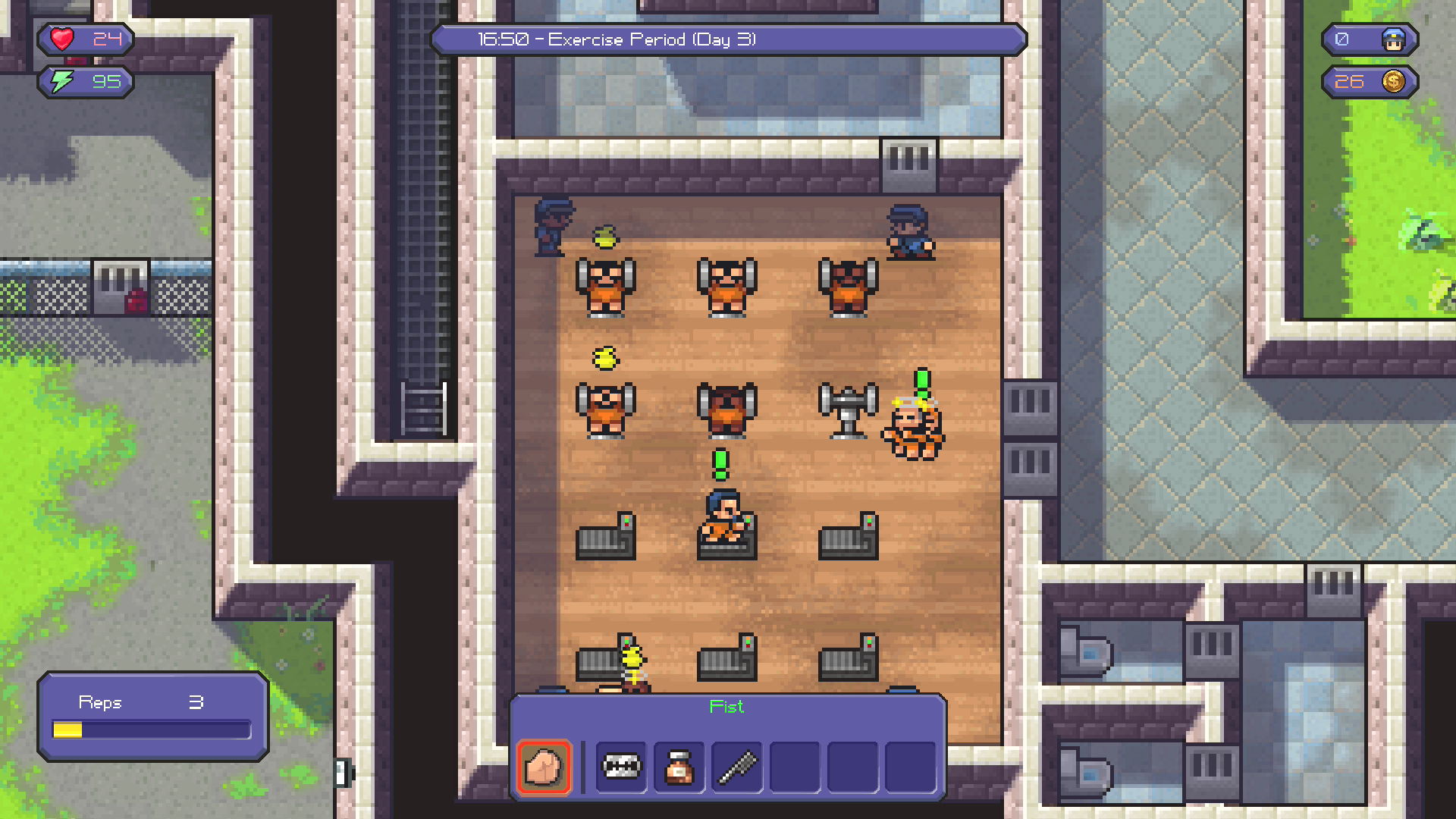 To reduce my beat down receiving and increase my beat down giving, I spent a lot of time in the weight room. Hammering on the shoulder buttons quickly raises physical stats, which mean more power in a brawl. But, like most mechanics in 'The Escapists', fighting is just awkward. Inmates will sometimes run away without acknowledging they’ve been struck, which would make sense if they ran towards a guard or security camera. Instead they dash whimsically through the hallways, and then inexplicably turn around to shank me. Inmate AI is odd and results in many instances where they pick a fight with another inmate in a crowd of guards, which of course leads to a guard beat down. Frustratingly, guards will also incapacitate both brawlers if they discover a fight happening, even if one is just defending himself.

I suppose this is the day-to-day horror of prison life. But in a video game, it’s just not that fun. Inmates don’t have much personality. They have a first name, and other inmates spout off random comments about their personal lives. My compatriots would help me rough up people when necessary, but had little to say about it. The guards didn’t say much when they brutalized me, either. There’s just not much heart; not much for me to be invested in.

The biggest draw is the puzzle-like quality of the gameplay. It was up to me to memorize guard behavior, learn about other inmates, study the floor plan, and eventually craft my way out. In this way 'The Escapists' looks something like a prison-shaped sandbox. There is more than one way to escape, and some of them can become quite masterful. 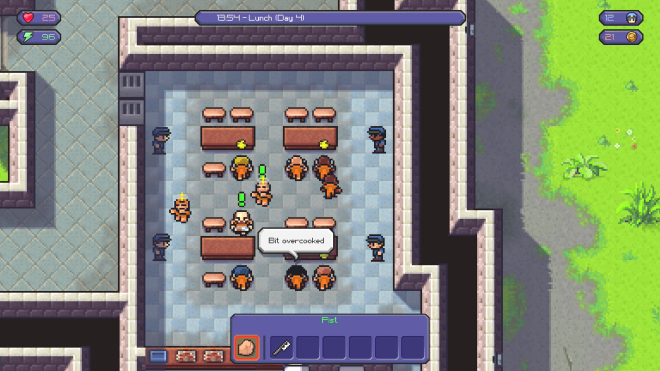 'The Escapists' is reminiscent of the energetic little sprites of the Genesis/SNES days. The characters are always moving, even when standing in place. There is little to distinguish characters from one another, but I find this more charming than quaint. The menu can be an issue, as with a controller it’s quite clunky, especially when crafting. Also, the limited field of vision with the camera can be a liability during risky activities like digging holes in the yard. 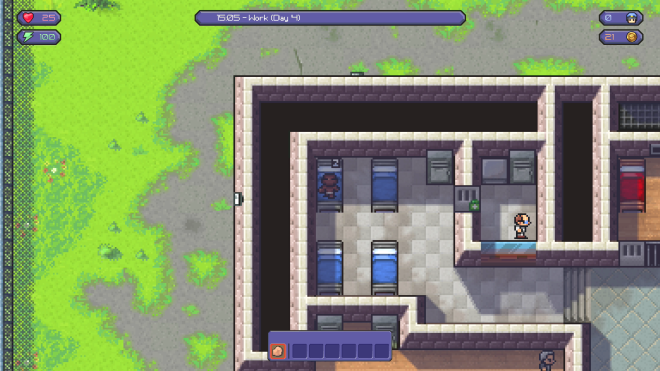 The sound effects are similarly old-fashioned, with little dings and beeps punctuating most interactions. The music is great in a MIDI/synthesizer way, but is limited in breadth and can get stale quickly.

Because the player is free to explore multiple avenues of escape, not every escape from every prison will be exactly the same. For the patient, going through and putting together a more complicated escape plan can be very rewarding. 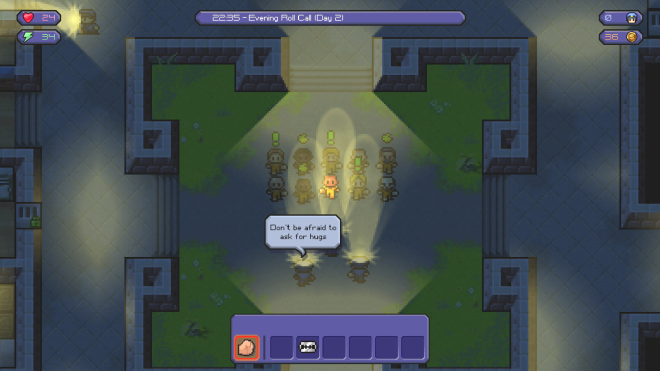 The prison theme is under-represented in games, and a welcome change from the more oversaturated motifs we’re often subject to (war, I’m looking at you). 'The Escapists' does have a lot of good ideas. It can’t quite deliver on many of them due to a slow interface, weird AI and other design choices. It’s a charming indie game that is welcome on the Xbox One but falls short overall.