The Game Itself
4 Stars
The Video: Sizing Up the Picture
3.5 Stars
The Audio: Rating the Sound
3.5 Stars
Replay Factor
3 Stars
Bottom Line
Recommended

The 'Mad Max' film franchise was rejuvenated this year with 'Mad Max: Fury Road', the first entry since 'Beyond Thunderdome' in 1985. It was well received and with backing of Warner Bros. is accompanied by the spin-off video game, simply titled 'Mad Max'. 'Mad Max' was developed by Avalanche, whose previous work includes the open world, destruction-heavy 'Just Cause' series. The game serves as a prequel to the accompanying film.

In the 'Mad Max' series, society has disintegrated after an enigmatic global conflict. In the ruins of Australia, sadistic road gangs have established themselves as the dominant life form, with few having the means to stop them. Max Rockatansky is a former police officer who lost his family in the early days of the collapse and now wanders the desert in his iconic supercharged Interceptor, occasionally fighting the good fight against raiders. At the beginning of the game, his car is stolen and scrapped for parts, and Max is left for dead in the desert with only a wounded dog for company. 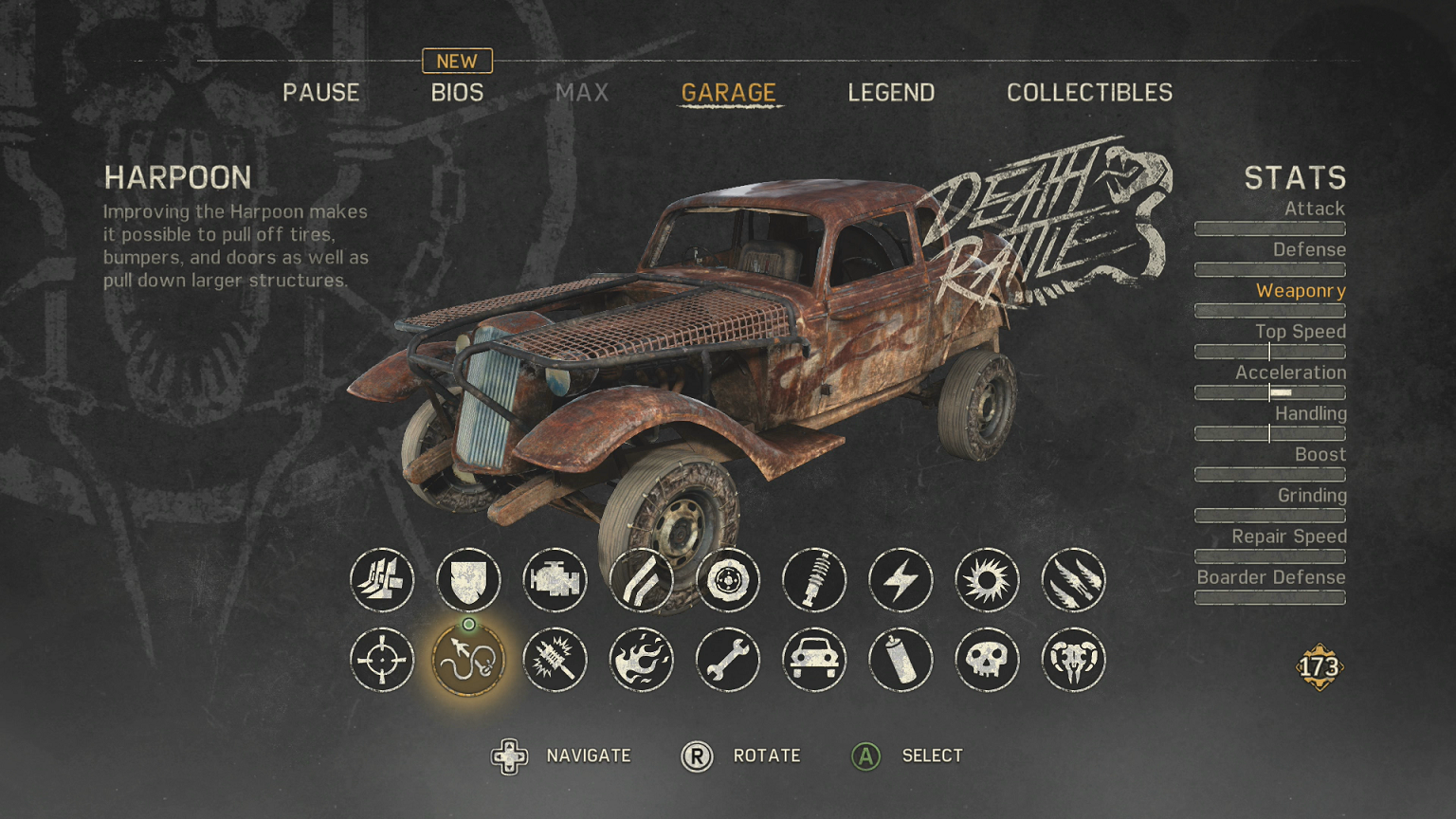 Max is our hero, so naturally he gets up and continues his quest for justice. He soon meets Chumbucket, a deformed little engineer with an appearance about as charming as his name. Chum is quite crazy and considers Max to be a messianic driver sent by his deity, the Combustion Angel. To assist the Saint in his duties, Chum has devoted his life’s work to creating the ultimate driving machine. For years he has been slowly piecing together the jalopy inside his sanctum, a rusted-out tanker in the middle of the desert. As I proceeded through the game, the sacred car leveled up and improved with me, as Chum installed upgrades I earned by collecting scrap.

'Mad Max' is one part combat racer, one part brawler, and one part open world. The melee combat is in 'Arkham' style, as many games are these days: Y is the counter, X is the strike, combos can be built, and so on. It is derivative, and not as advanced as games that have come before it, but still fun and with its own level of brutality. Max has fewer qualms about killing people than the Bat does, so his moves are typically gruesome. Early in the game the fury ability is unlocked that adds even more brutality. Controls are sticky during these fights, so don’t expect amazing reaction times.

The best part of the game by far is the vehicular movement and combat. This was the part that Avalanche really needed to succeed with, given Max’s legend, and by and large it works. The Magnum Opus starts out as a solid if spartan ride, but before long can be customized with spikes, nitro, harpoons, side-mounted flamethrowers, a turbocharged engine, and more. It controls like a charm; not quite as smoothly as a AAA racer but natural considering the emphasis on combat. Fighting hordes of wasteland maniacs is good sport. The first time I used the harpoon to pull an enemy out of his poorly armored junkheap and flung him across the desert was a giggly moment. Max can sideswipe and ram enemy vehicles in addition to shooting things at them, and enemies can do the same. Because Chum goes everywhere with Max, he quickly repairs the vehicle when not in combat, which results in less downtime. The only iffy mechanic is fuel, which depleted relatively slowly unless nitro or flamethrowers are used (who doesn’t want to use those all the time?). Finding more is usually not a huge pain but isn’t exactly an enjoyable gameplay mechanic.

Like his car, Max himself is upgradeable. Completing challenges awarded me with tokens that I redeemed at a strange wanderer for bonuses. These are in addition to Max's upgrades, which are also purchased with scrap. A few weapons are available but break quickly, and shotgun shells are scarce, so I typically fought either with my fists or the car. 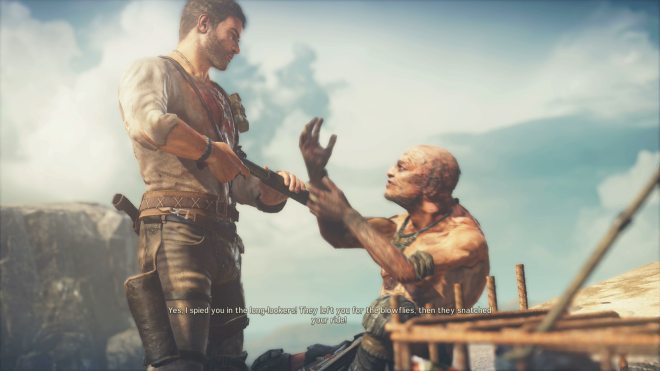 The last-gen versions of 'Mad Max' were cancelled earlier this year to focus on new tech, and the results are suitably nice. Not shockingly so, but still pretty, especially the panoramic desert environment and vivid skies. Capturing the character of the film franchise's landscape is more of a payoff than the stunning detail seen in other contemporary openworld games.

Character modeling is excellent, especially for the colorful gang members. There are some clipping and draw-in issues, not to mention longer load times. 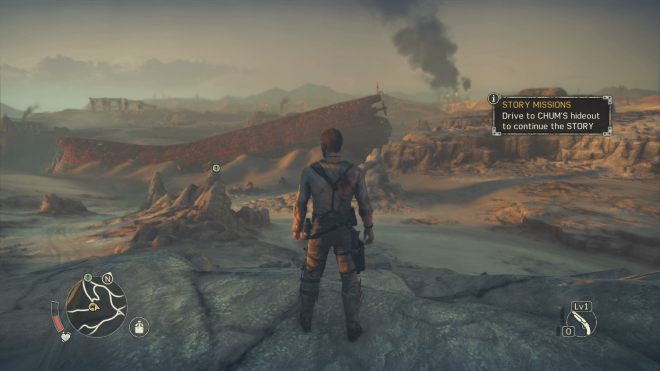 'Mad Max' doesn’t have a particularly memorable score, but the sound effects are much better. Cars sound powerful and authentic (at least, what I think a flame-throwing overcharged death machine would sound like). The main character’s voice acting is workmanlike and flat, suitable given Max’s taciturn character. Chumbucket is awesomely voiced and frequently steals the show from the main character.

The open world is one of the game’s weaker aspects. It is relatively thin in content - many locations are just a couple pieces of scrap and a crazy wastelander to fight. The locations aren't particularly big, and all scrap is obsessively tracked, so there is less of a focus on exploration and more of a checklist, like the game is just kind of going through the expected open world motions. It is far more fun to tool around in the Magnum Opus in between sites, chasing down roving marauders and blowing cars up whenever possible. The content that stands out are the outposts - larger locations, chock full of enemies and gadgets, with optional defenses that can be destroyed with the Opus beforehand to weaken the residents. 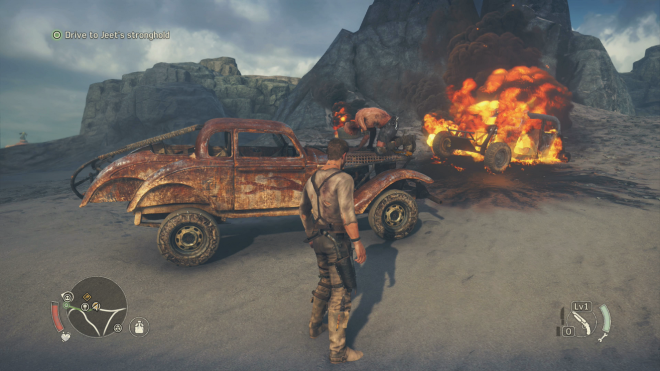 'Mad Max' is a decent open world experience. It checks all the boxes for what is expected with a game in this genre, but doesn’t bring much new to the table. Max's ride and sidekick are important high points, and a love for the film series helps. The game does have heart and some great vehicular combat; it's just missing some body work.