The Game Itself
3.5 Stars
The Video: Sizing Up the Picture
3 Stars
The Audio: Rating the Sound
4.5 Stars
Replay Factor
2.5 Stars
Bottom Line
Worth a Look

'Hotline Miami 2: Wrong Number' was developed by Dennaton Games, a Swedish company consisting of just two people. It follows 2012’s 'Hotline Miami', which was quite well received, but noted for its violent, high-tempo, and challenging nature. The devs have claimed that this will be the last game in the franchise.

'Hotline Miami 2: Wrong Number' is a top-down affair with a pixelated, 80s-style arcade aesthetic. In each level, the player must kill a dozen or so bad guys, at first with melee weapons and increasingly with firearms as the game progresses. The player character changes for each level, and each has a different ability. One can dodge roll, another has lethal punches, etc. The player is extremely fragile, and just like the enemies, one punch or shot is enough to bring them down, restarting the level. 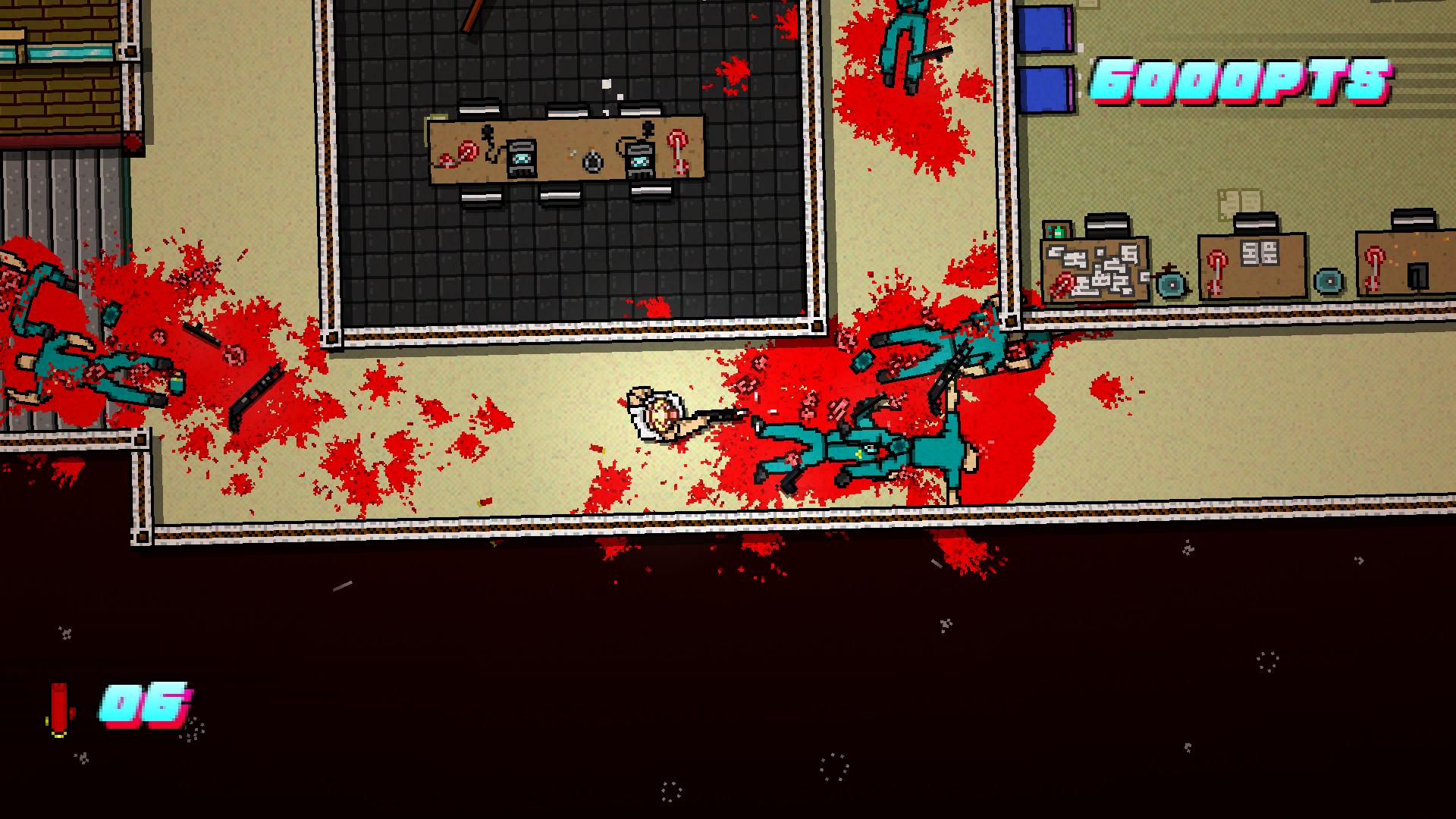 Not being familiar with the first game and its blistering difficulty, I spent an hour or two just getting mowed down. It felt like 'Edge of Tomorrow' (itself a movie based on the concept of video game respawns) where I was murdered time and time again without mercy, often within just a few seconds of my last death. It was quite frustrating, especially as problems began to surface with enemy AI, level design, and pathfinding. Despite these issues, eventually I began to not suck so bad and actually started to enjoy playing the game.

Still, the issues are often serious and cannot be ignored. The maps are large enough that they are not completely visible on one screen. There are controls to shift the field of view, but this is clumsy and can still hide enemies who are capable of killing me from two or three screens away. That’s not hard; it’s just sadistic. Memorization of enemy locations help, but since their movements can be erratic, cheap deaths are unavoidable. Even good players of 'Hotline Miami' are going to die a lot. That’s just the way it is. 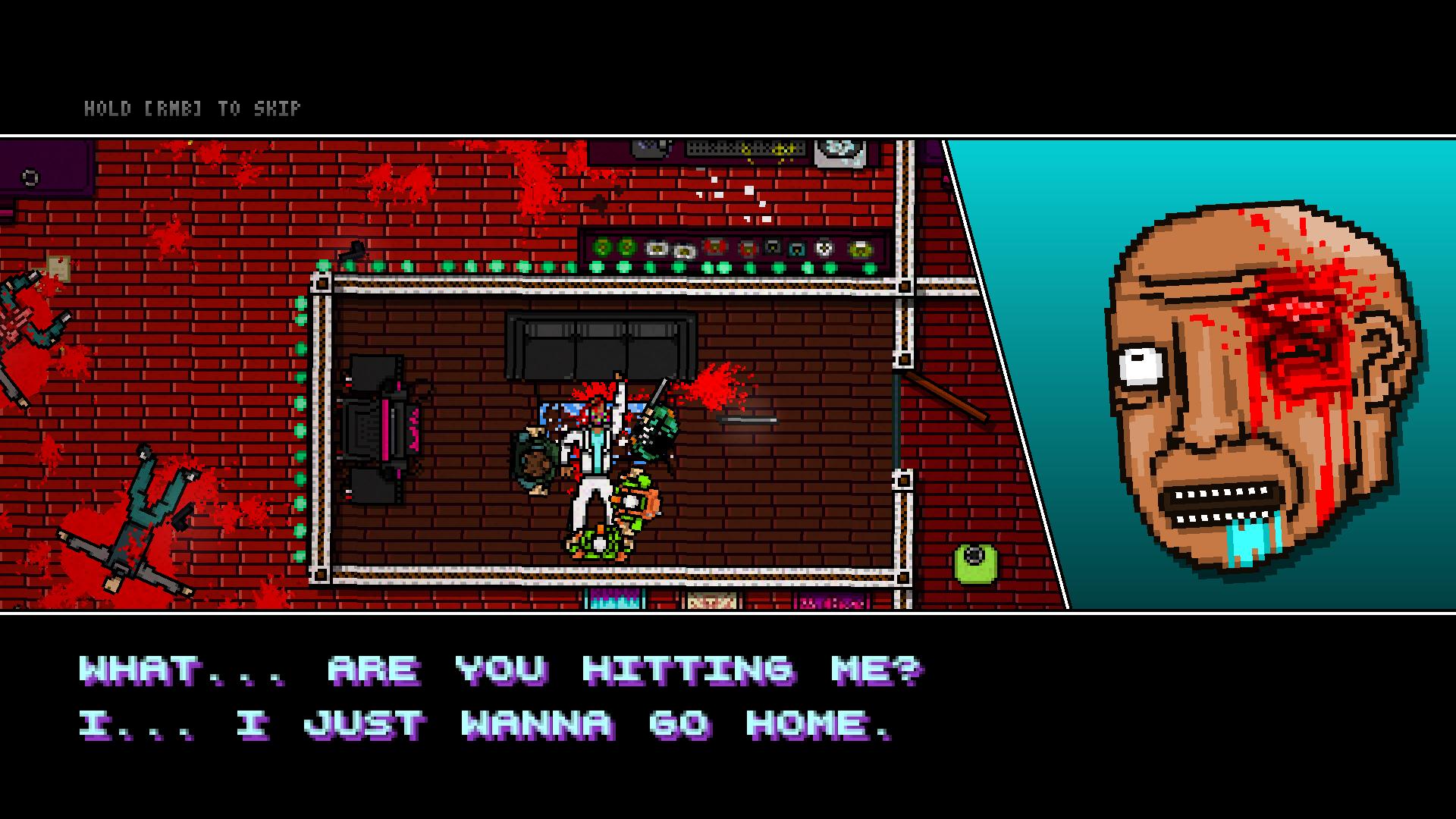 When I started to die less, the game began to grow on me. Cutting down swathes of bad guys, flicking the cursor to and fro to blast them as they converge from all directions, and finding new routes to move through levels has a certain charm. It is sometimes imbalanced by overpowered enemies, but there are ways to trick enemies and hide, inviting a level of stealth.

As for the story, it was inspired by the neon glitz of the 80s and early 90s. It has something to do with drugs, and organized crime, and a movie. It jumps around a lot, and for most of it I had no idea what was going on. Knowledge of the first game is extremely helpful in this regard, as many returning characters are not introduced and the first game’s plot is not explained, only referenced frequently. I often felt as though the talky bits in between each level were just an unwanted interruption. 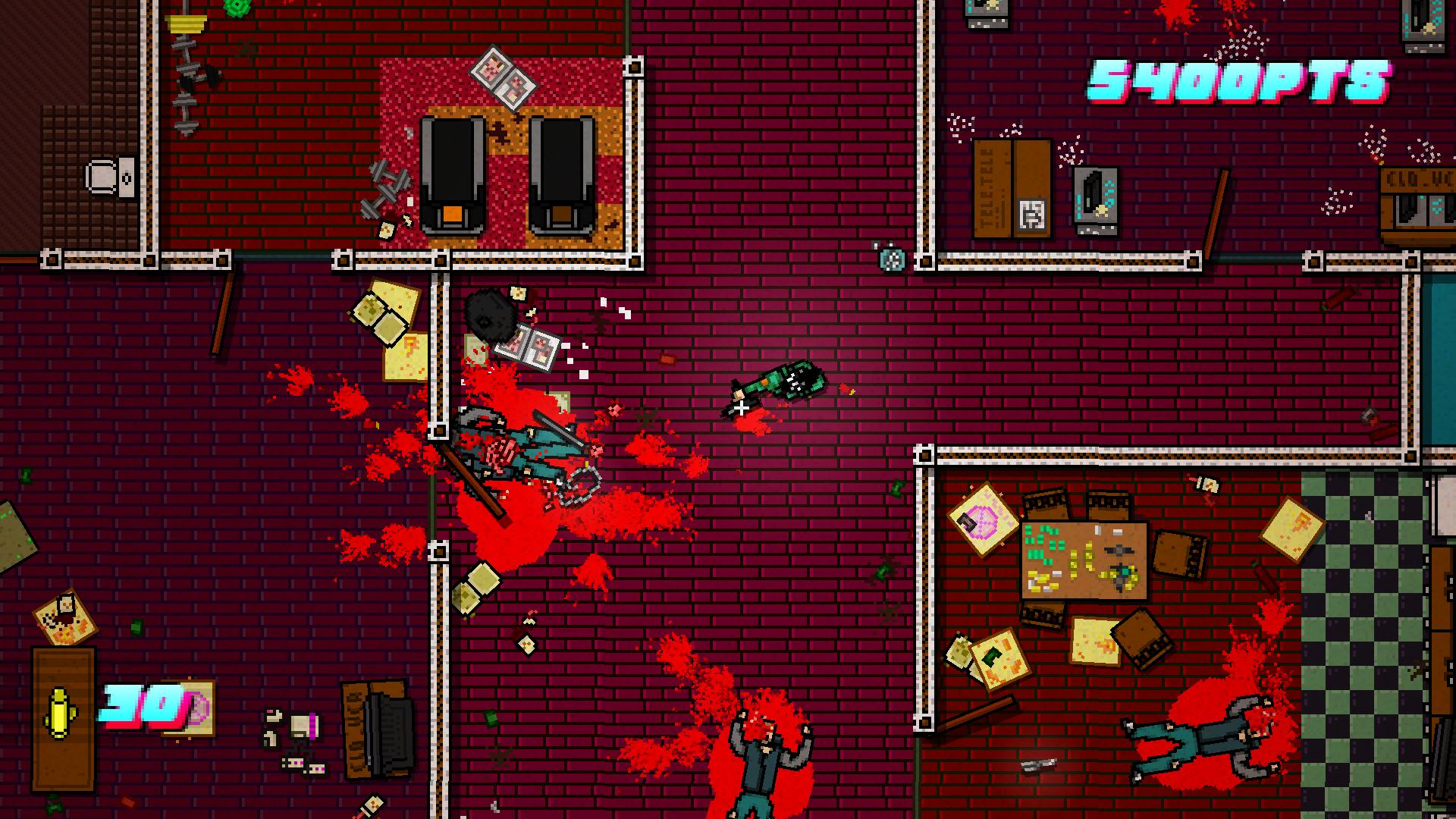 It should be noted that, despite the level of graphical detail (discussed more in the next section), this is not a game for the faint of heart. I mean this in terms of both difficulty and content. The 2D sprites are smashed, stabbed, and shot with gory results. Little pixelated intestines and brains stream the floors and walls. People are chopped in half. The finishing animations resemble a car tire running over a packet of ketchup. Successfully completing a level, while satisfying, also leaves a grisly, bloody tableau. There’s some sexism and implied sexual assault, as well as graphic violence against animals and police officers. This is not a politically correct game; take from that what you will. 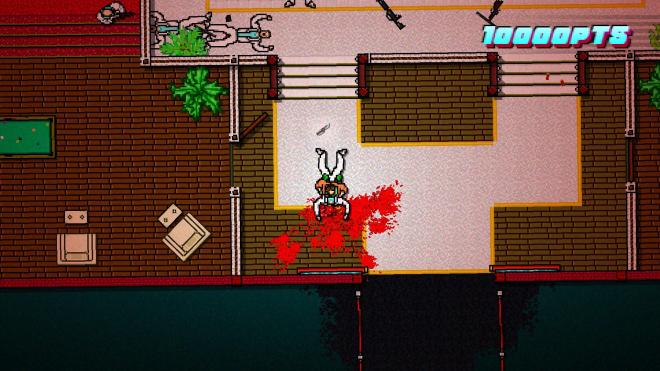 'Hotline Miami 2' looks like a game from circa 1987. Think 'Contra' or the first 'Metal Gear' in terms of textures, combined with some psychedelic sensibilities, and you’re on the right track. The animations and color palette are more advanced than the rest of the game would suggest. As mentioned, the camera is a real problem. 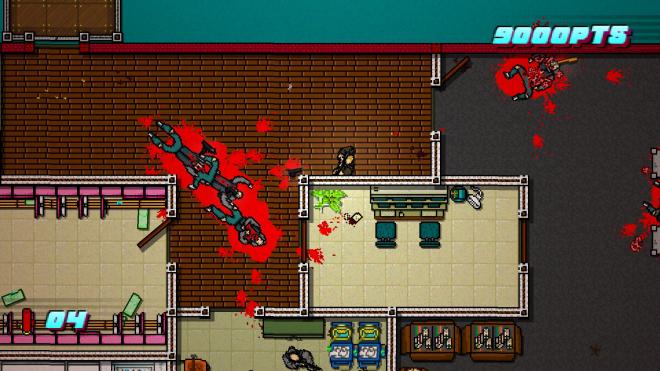 Each level is accompanied by one song, typically both indie and electronic in nature. These artists, like Perturbator, Vestron Vulture, and Magna, are known for their retrofuturistic 80s synth/modern electronica sound. This fits in perfectly with 'Hotline Miami’s' theme, and the songs are good enough that they won’t get old quickly, even when you hear them over and over because you’re dying nonstop. There’s no voice acting, and the sound effects are suitably visceral.

Each level in 'Hotline Miami 2: Wrong Number' is scored based on player performance. This might normally attract perfectionists, but the gameplay itself is so repetitive that finishing a level once is exhausting enough, much less trying to get an A+. 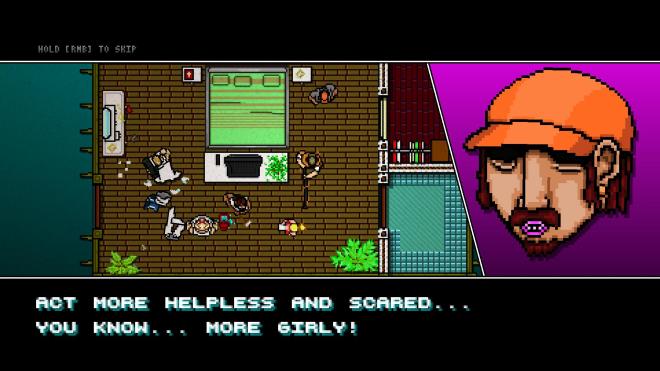 'Hotline Miami 2: Wrong Number' is a love-it or hate-it kind of game. I guess that’s not completely true, as in my case I both love it and hate it. The gameplay can be addictive, especially for those who stick with it. It can also be exasperating to the point of anger and despair. Its imperfections often threaten to destroy its delicate balance, but this one may appeal to lovers of the high difficulty.