The Game Itself
4 Stars
The Video: Sizing Up the Picture
3 Stars
The Audio: Rating the Sound
4.5 Stars
Replay Factor
4 Stars
Bottom Line
Recommended

3DS digital version reviewed. The DLC was not tested for this review.

The Etrian Odyssey series has gained a lot of traction since the 3DS's release. What began as a rather niche dungeon crawling series for the Nintendo DS suddenly gained a good deal of exposure with its first 3DS entry, 'Etrian Odyssey IV: Legends of the Titan'. Since then, remakes of the first two games in the series have been announced (with the first one already released), and a crossover with Atlus' Persona series in 'Persona Q: Shadow of the Labyrinth' introduced an even wider audience to the series' brutally difficult, but addicting dungeon crawling style.

This time around it's 'Etrian Mystery Dungeon', which is actually a rather unusual crossover between the dungeon crawling series and the long standing 'Mystery Dungeon' games, which take on more of a rogue-like flavor. Does this mash-up succeed?

'Etrian Mystery Dungeon' begins with you, the player, coming to the town of Aslarga in search for adventure. After a short romp through a tutorial dungeon as a Landsknecht (basically the balanced melee attacker class), the player gets to create a guild and 'recruit' new members. Recruiting new guild members is essentially just creating new characters, choosing their class, how they look from a few different options, and their name.

The overall story is very light in 'Etrian Mystery Dungeon', though the game does take the time to give some exposition on the citizens of Aslarga and why they are desperately trying to recruit adventurers to explore the Mystery Dungeons. 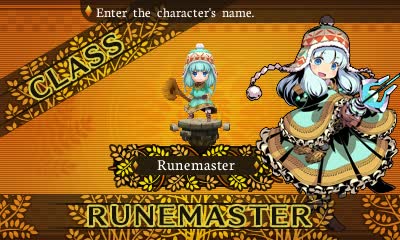 Instead, 'Etrian Mystery Dungeon' focuses on the gameplay first and foremost. You select up to four party members and delve into the Mystery Dungeons, which are ever-changing and randomized, a rogue-like staple. These dungeons are filled to the brim with enemies, traps, and loot, and it's of utmost importance to bring a balanced party into a new dungeon. It's very hard to get by without a Medic for healing, and without a Protector to soak up hits for allies it can sometimes be difficult for them all to survive… and let's not forget elemental affinities, and the importance of having a character that can use elemental attacks to exploit them for major damage.

This might sound like the player might be forced into using specific parties, but there is a good amount of room for experimentation; for example, a few other classes can pick up healing duties if built correctly, and a range of classes can learn elemental based skills. This is great for both series newcomers and veterans alike, as newer players can stick with a typical, balanced team while veterans can put together some oddball make ups that play completely differently.

In dungeons, 'Etrian Mystery Dungeon' plays like a typical rouge-like; it's turn-based in nature, and you control one character in a turn. If needed, which party member being controlled can easily be changed, provided that it's a new turn and no actions have been taken yet, while the other party members choose their actions based on the situation at hand. Party members earn experience and level up, which grants them skill points that can either be allocated yourself or automatically allocated by the game via a few chosen presets. 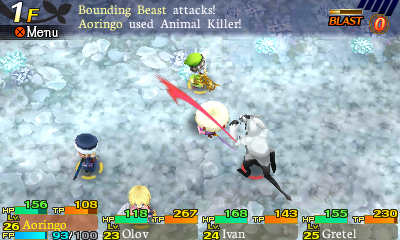 Additionally, forts can be built within the Mystery Dungeons. These forts grant a sense of stability within the dungeons, as they prevent an area of the dungeon floor's layout from changing, and higher quality forts provide other useful features, such as Geomagnetic Poles to escape dungeons and return to the saved floor later. Their biggest purpose, however, is to prevent the town from being attacked by DOEs.

DOEs, much like the Etrian series mainstay FOEs, are extremely difficult enemies that oftentimes the party has no hopes of beating. When they appear, they'll slowly move up through the dungeon, and if the party cannot stop it, the DOE will get to Aslarga and destroy one of the buildings in town, which will cost a pretty penny to rebuild. If a DOE runs into a fort, the DOE will instead destroy the fort and retreat back to the lowest level for a while, preventing the DOE from making it to town.

Between the normal dungeon crawling, carefully using money to buy new equipment, build forts, and upgrade Aslarga, and DOEs, there is a lot to keep track of in 'Etrian Mystery Dungeon'. Thankfully, though, all of these mechanics are introduced at a decent pace, allowing players to get used to one mechanic before another one is introduced. It's also very satisfying to balance all this while exploring Mystery Dungeons, and for me led to an addicting experience that I had trouble putting down.

It is important to note, though, that 'Etrian Mystery Dungeon' does feel a little on the easy side. However, I stress that it feels easy compared to other Etrian titles, which is a series well known for its very tough difficulty. Overall 'Etrian Mystery Dungeon' isn't so easy that someone could blast through it without any use of strategy or caution, but those expecting the brutal difficulty of the mainline Etrian Odyssey titles may feel a bit disappointed. 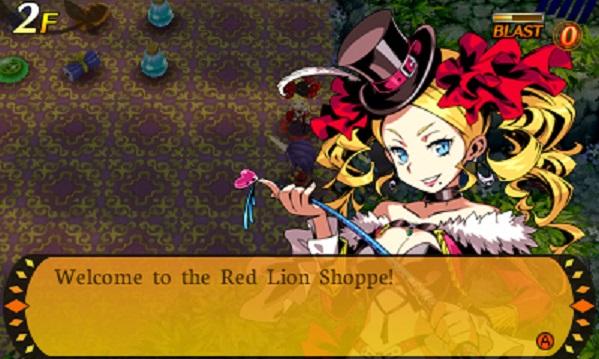 While 'Etrian Mystery Dungeon' is not an ugly title, the visuals are not one of the title's strong suits. All of your guild's party member and the enemies are in a small chibi form, which doesn't allow for much detail for their models outside of the status screen. The models are colorful enough and don't get lost in the background, but they are a small step down from the typical Etrian fare. 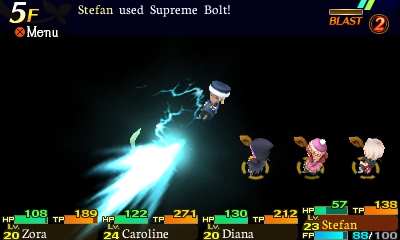 'Etrian Mystery Dungeon' brings with it an absolutely wonderful musical score. Consisting mainly of remixed tracks from previous Etrian Odyssey titles, the music fits wonderfully with the game. There are somber and tense tracks for dungeon exploring, rocking battle tracks for boss battles, and for when monsters get the jump on your party. Even the town's track is solid.

Of course, given that the player builds their party themselves, there's nothing in the way of voice acting, not even for NPCs. Sound effects are present, which are also reused from previous 'Etrian Odyssey' games; they aren't spectacular, but at the same time they aren't offensive to the ears, either. 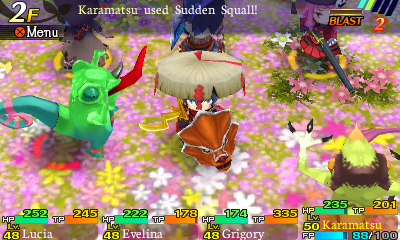 There are plenty of side-quests and other goodies to look out for after 'Etrian Mystery Dungeon' is complete. Mainly, one of the more fun things I found to do was play around with the various classes and party make ups available. It can be a bit difficult to mess with party formations while going through the main story; or, at least it was for me, as I'm pretty unskilled with rogue-likes in general and had to have a balanced party to ensure my survival. However, as I got to play around with the variety of classes and the various ways they could be built up, I found plenty of reason to come back to the game, even if I wasn't purely progressing the story.

'Etrian Mystery Dungeon' really isn't a title that seemed as though it would work out: 'Etrian Odyssey' and 'Mystery Dungeon' are both very different types of games and blending them together just seemed off. However, the end result is a surprisingly great and addictive title for fans of both series alike. It's hard to tell if gamers outside the fandom will want to dive into this 3DS title, but the barrier of entry difficulty wise is low enough that most any RPG fan can jump in and have an enjoyable time, regardless of their knowledge of the series at hand.