The Game Itself
3.5 Stars
The Video: Sizing Up the Picture
3 Stars
The Audio: Rating the Sound
4 Stars
Replay Factor
4 Stars
Bottom Line
Recommended

Xbox One disc version reviewed. You can also read our review of the PS4 version.

As with just about every big movie franchise that appeals to kids, Traveller’s Tales has created a Legofied version of 'Jurassic World'. 'Jurassic World' is of course the latest release in the 'Jurassic Park' film series, originally based on a series of novels by Michael Crichton. This is the first 'Jurassic' title by Traveller’s Tales, and includes Lego adaptations of the four feature films of the popular franchise.

As with real life Legos, 'Lego Jurassic World' is all about breaking down and building up structures made of shiny plastic studs and panels. It is difficult to pin down in a particular genre, especially for this particular Lego game because there are many different styles of play all rolled into one. There is action, platforming, puzzles, and even a bit of on-rails racing. And of course, there are lots of dinosaurs - playable ones even. They are kind of similar to the big Lego figures found in previous games, like Solomon Grundy in 'Batman' or the Hulk in 'Marvel'. They cannot be used for most tasks and are basically just good for smashing stuff (although the velociraptors are smart and agile, of course). 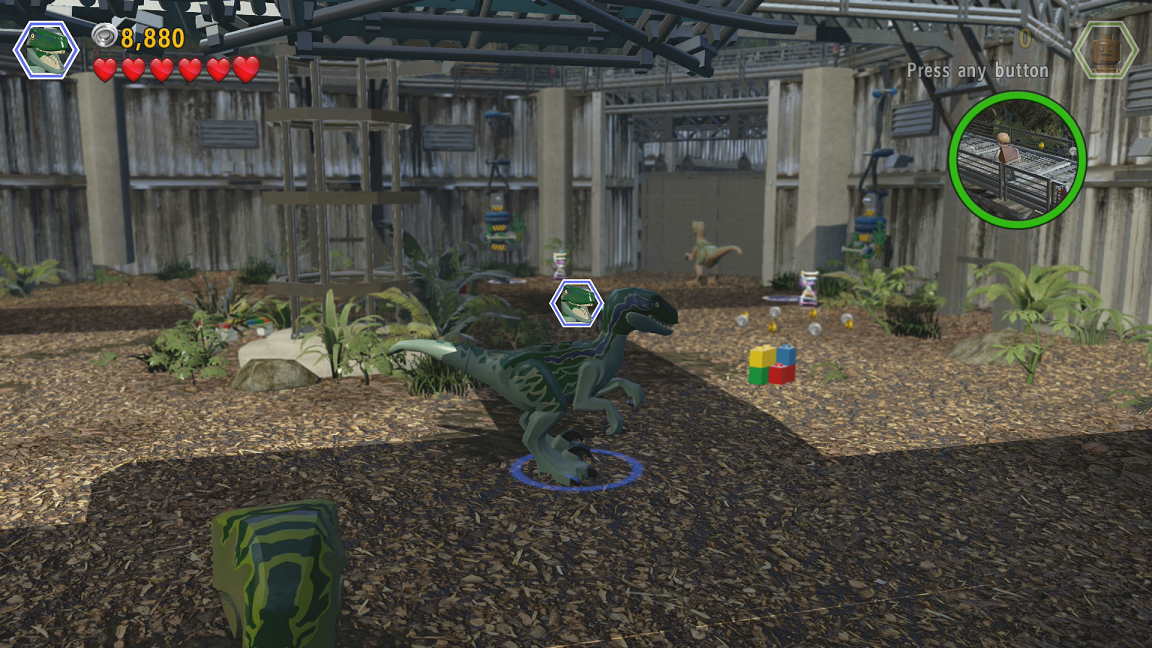 Each of the four 'Jurassic' films are represented in the game. The campaign can be started from the classic film series or the newest one. Iconic scenes from each are translated and Legofied. Everything is cutesy - there’s no blood here; nobody getting eaten by huge scary monsters or anything grisly like that. It’s family-friendly, light-hearted slapstick comedy, with a few grown-up jokes hidden between the lines. The cheeky pop culture references and gags are everywhere. I wouldn't go so far as to say it’s a gaming version of 'Family Guy', but you will notice jibes at other movies and games, Spielberg, and running jokes like this sausage thing that manages to pop up in seemingly every level.

Fans of the films will recognize the scenes, but each has been heavily modified so as to provide some kind of puzzle element. Every story mission has only a few characters available, and those characters each have a special power or two that they can use to move through the levels. Alan Grant, the grumpy paleontologist from the first movie, can slice through ropes and vines with his trademark raptor claw. Ellie the botanist can water plants and, interestingly enough, dig through huge piles of dinosaur poop to find items of interest, which she does by jumping headfirst into them with aplomb. Other characters can jump higher, squeeze through small spaces, shoot guns, etc.

Traveller’s Tales is perfect at finding just the right balance of difficulty in their puzzles. It may be an "E for Everyone" game, but sometimes those puzzles get a bit tough. Of course when the solution finally reveals itself there is a brief moment of shame, but the game is so plucky and cheerful that we just move along and everything is great. It is nice to play a game sometimes without regard for difficulty or anything like that - you just fire it up, smash some Lego things, grab collectibles, and call it a day.

The action is less common in 'Lego Jurassic World' than I’ve come to expect in a Lego game. This is not a bad thing, as the experience is still enjoyable without as much of the play violence. The fights are infrequent and typically take place between dinosaurs (even in a cartoon game, I guess it is a bit silly to expect human minifigs to be bashing raptors with their bare hands). Many of them eventually end up in a quick time event. Every few levels there is a race, and though they are kind of on rails, it’s still fun to jump out of the way of a rampaging indominus rex, the lab-grown frankenmonster from the most recent movie. 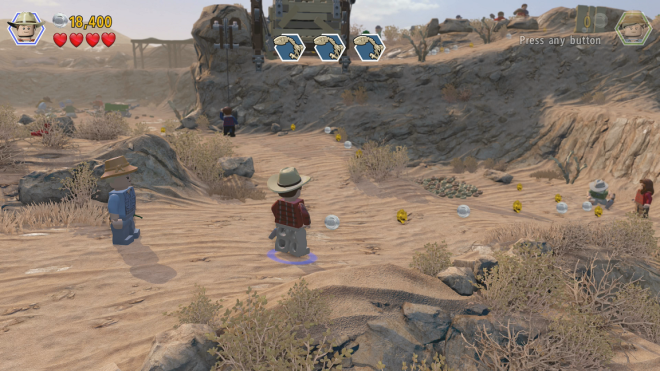 There are no great strides here either in gaming in general or the precedent set by previous Lego games. The shiny plastic aesthetic of the toys is captured perfectly and everything outside of that is more or less window dressing, although there is the occasional pretty effect in the environment. The dinosaurs are not the typical minifig but have still been reproduced with a good blend of toy and realism (real in the sense of emulating movie special effects that have been adapted from a science fiction book series). The game has almost no performance issues and bugs are uncommon. The only real issue is the camera, which can be finicky and does not like to spin around to help the player find things. 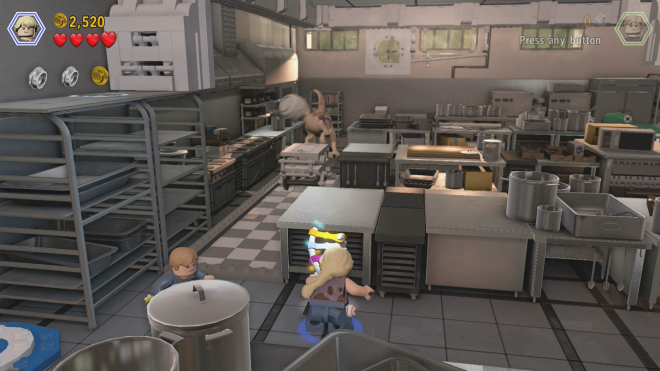 The beautiful and instantly recognizable score from John Williams steals the show. Also included are voice clips snatched straight from the movies, complete with many of the famous one-liners ("must go faster!”). Some of the clips are fuzzy though, as though the transfer wasn’t quite perfect. Dinosaur noises are also very authentic in their Hollywood way.

'Lego Jurassic World' has a large amount of content. Finishing the campaign is only the beginning. Afterwards, each level can be played in Free Play mode, where any character can be brought along. This makes it much easier to collect more studs and find minifigs, amber, gold bricks, and other such tchotchkes. There is also a drop-in split-screen co-op mode for Legoing with friends and family. 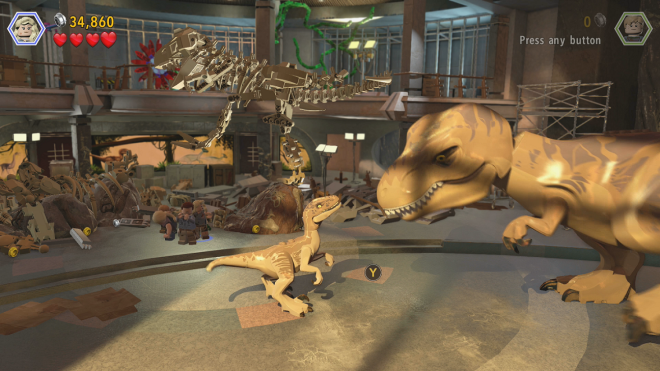 The Lego games have been around for a long time now, and with their name value and charm, they’re probably not going away anytime soon. That’s fine with me. Each one is only an incremental improvement on the last, but they are an easy-come, easy-go experience, good for some chuckles and decent gameplay. With a new film attracting big audiences, now is a great time to revisit the whole franchise, which 'Lego Jurassic World' does in a fun and familiar style.