The Game Itself
3.5 Stars
The Video: Sizing Up the Picture
3.5 Stars
The Audio: Rating the Sound
4.5 Stars
Replay Factor
4 Stars
Bottom Line
Worth a Look

From the days of 'Battlefield 1942' being a PC multiplayer sensation to the more recent 'Battlefield 4' console mainstay, DICE's 'Battlefield' series has taken players from one war to another. This time around though, Electronic Arts has tagged Visceral Games (of 'Dead Space' fame) to make a 'Battlefield' full of cops and criminals. After a big reveal at E3 in 2014, several public betas, and a sizeable delay, it's time to see if 'Battlefield Hardline' is worthy of the 'Battlefield' name and worth standing on its own.

'Battlefield Hardline', like Activision's 'Call of Duty: Advanced Warfare' before it, represents a heartening trend of the big blockbuster FPS franchises to finally lighten up and use their powerhouse game engines for something other than staid commitment to bigger explosions and the wages of modern warfare. The difference between 'Hardline' and 'Advanced Warfare', however, is the simple, blessed fact that 'Hardline' has DICE and Visceral Games apparently remembering to crack a smile every once in a while.

The game that 'Battlefield Hardline' will become isn't obvious in its opening missions. The prologue is little more than a straightforward, no-nonsense drug bust gone wrong, turning into a high speed chase. It's only when the mission's over that you realize where DICE and Visceral are going with this, and a gradual loosening of reality's grip begins. Missions end with a slow-scrolling recap of your arrests and any evidence collected, while on the right, a Netflix-styled countdown to the next episode begins. 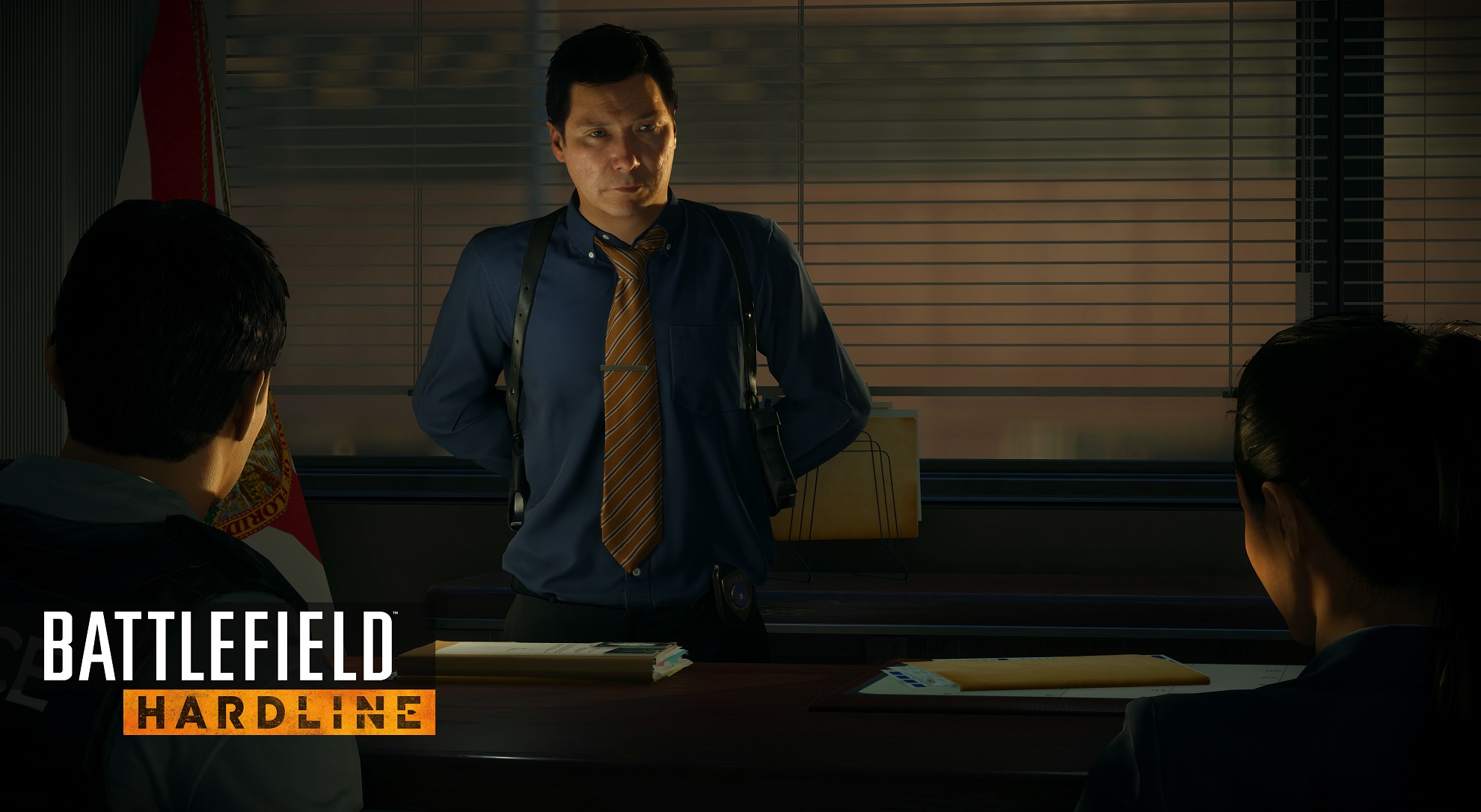 See, there was a concern a few months ago, as Ferguson and the likes began raging across the country, that this may have been the worst possible time to release an urban cop entry of a series known for its grim realism, not knowing at the time that Visceral's take on 'Battlefield' would bloom into something far more akin to Michael Bay producing a Netflix Original Series about Miami cops. It doesn't devolve into 'Bad Boys II''s gleeful, delirious misanthropy, but it's also far more breezy than its pedigree. In an alternate universe where this actually did find itself on TV, this would've made itself a comfortable home following 'Burn Notice' over on USA. But instead, we have 'Hardline,' a game, where cops stroll around drug dens with a Desert Eagle and a sniper rifle, holding a magical GPS that tags criminals through walls and listens to them get frustrated over mobile gaming, or screw up simple orders from their boss. It's a game where a disgraced officer is such a good cop he still makes arrests even though he's not required or even registered to do so anymore. It's a game where you get into massive, 20 minute long shootouts in Libertarian survivalist meth addict trailer park communes. 'Hardline' is just too unapologetically, entertainingly slight to have anything of meaning to say, and the game is so much better for it.

It would feel empty, but just like the best Bayhem imaginable, it only floats because the people we're doing all this running and gunning with are surprisingly amiable, albeit rough around the edges. Our hero, Nick Mendoza, is an almost saintly hero cop who fast gets an Elliot Ness lesson on the impossibilities of being a good cop in a crooked town. Aside from being Cuban--of note, the cast in general shows off a pretty commendable amount of diversity while dodging their stereotypes--he's a pretty standard modern gaming protagonist, but there's enough heart and personality in the portrayal to dodge being just a non-descript player cipher. Kelly Hu, of 'X2'/'Scorpion King' fame, has a satisfyingly nuanced role to play here, as a good cop forced to play bad cop to keep her job. The game does the favor of not saddling her and Mendoza with a shoehorned love story, keeping their burgeoning partnership at a measure of ironic distance. A score of "I know that guy/girl!" character actors from both Hollywood and gaming round out the menagerie of personalities to be found here, helping to round out a fairly predictable plot with a smart alecky script, and some legitimate chemistry among the leads. 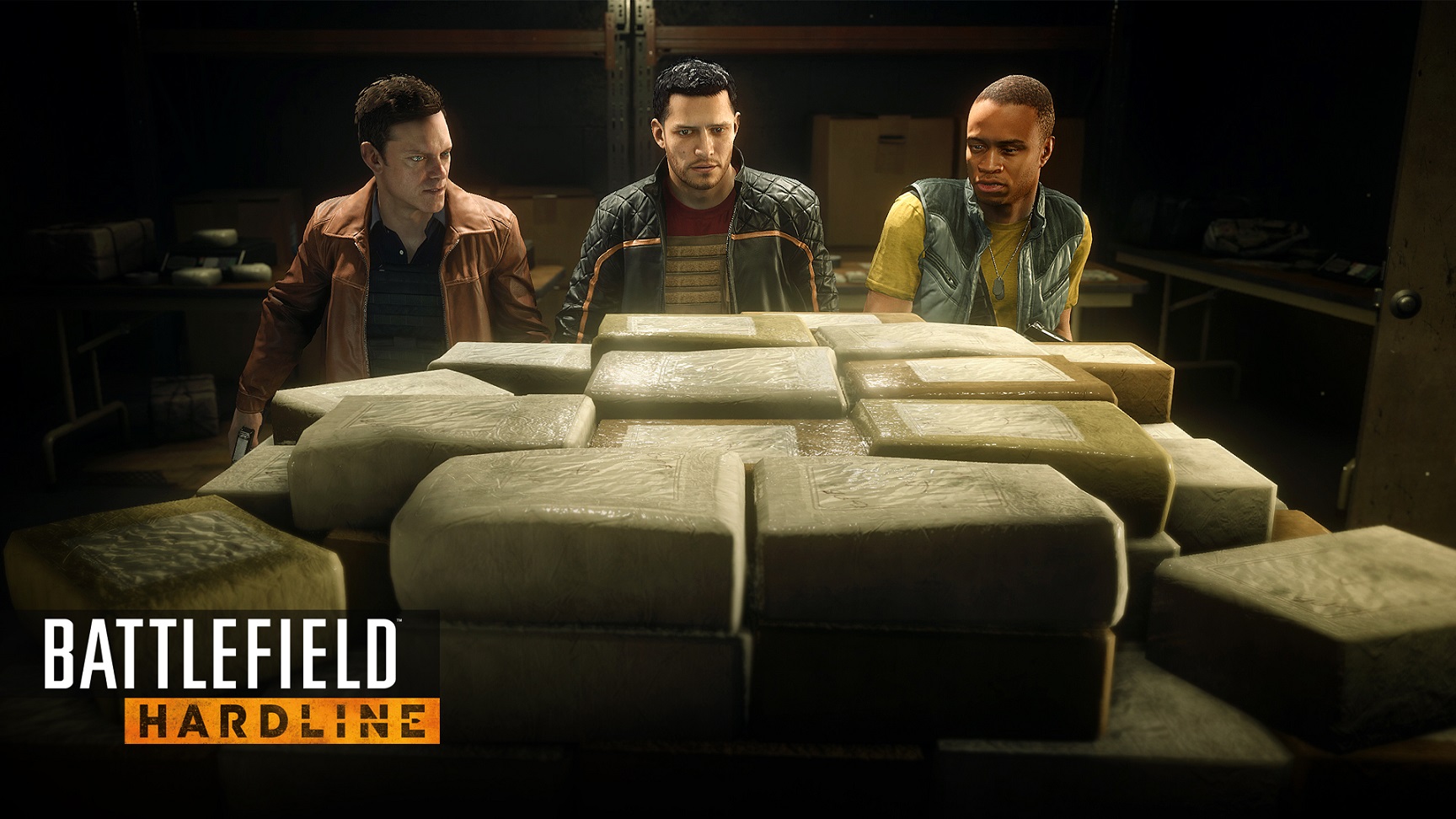 It's all ultimately in service of the action, though, and in that area, 'Hardline' is at least more consistent than its predecessors, but doesn't hit its spectacular highs. It's a rather predictable FPS when all's said and done, with a few cool setpieces--with the aforementioned trailer park shootout and a police raid at a shopping mall during a raging hurricane as standouts--and the occasional new trick. Maps continue to buck the trend of linear, on-rails gameplay, at least allowing for multiple approaches to every situation, though you still occasionally feel the game ushering you along the way it's scripted to. The arrest mechanic plays in the prologue like it's going to be a cornerstone of interrogations, the end result of hard won victories and breathless takedowns, but ultimately amounts to little more than a stealthy alternative to running into every situation guns blazing. The stealth is a welcome avenue, and going quiet, taking out alarms, and surveilling your surroundings before jumping in is satisfying, but it has, admittedly, been done better in other games. Where the game excels is in the customization of weapons during your frequent opportunities to select loadouts, the sheer variety of add-ons, color customizations, and stat enhancers to give you the exact weapon you want and need at any time. It helps most during the game's hardest shootouts, knowing that the right tool for the right job is in there somewhere, as long as you experiment, and finding your new, lethal best friend in there somewhere is half the fun.

Then, of course, there's the multiplayer component, which will be the bread-and-butter for many, which would be a bad move, since many of the game's best weapons and enhancements are only had by beating the campaign. Still, not that it will necessarily do any good this time around. The multiplayer is the ultimate game of Cops-and-Robbers, with heist situations and hostage rescues taking their place alongside plain old, no-frills Deathmatch scenarios. The new modes are mostly variations on old Capture the Flag/King of the Hill themes as well, and the heists are thoroughly outclassed by 'GTA Online' releasing their heist update so recently, but there's wild, chaotic fun to be had throughout. Occasionally too chaotic, as games with high numbers of players often turn into a jumble of icons and gunfire, with a wide learning curve for figuring out where you stand in relation to your enemies.

The best and most unique of the modes, however, is Hotwire, in which you earn points by driving a car around above a certain speed as long as possible before you get taken down by your enemies. It's a hectic, insane twist the game could use more of. 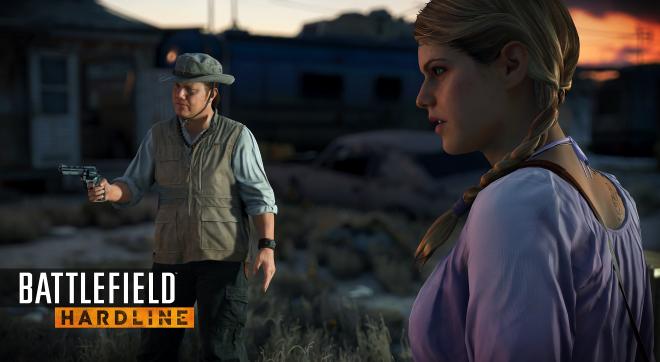 Generally, 'Hardline' looks good, with some extra attention paid to fine detail and motion capture this time around. It doesn't look head and shoulders above 'Battlefield 4', but it is definitely an improvement.

The major problem is that it has its predecessor's issue of switching from a gorgeous 60fps during actual gameplay, to a more cinematic framerate during cutscenes and scripted events. The shift is always jarring, and it is frequent. 'Battlefield 4' got a pass on that, due to being a first wave PS4 title, clearly optimized for previous gen. There are fewer excuses for not pushing the envelope for the next gen version this time around. 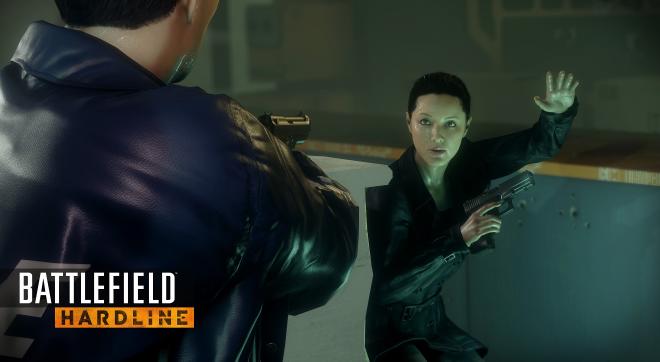 'Hardline's soundtrack is a great eclectic mashup of hard bluesy rock, spanish tunes, hip-hop, and a bassy score from the same guy partially responsible for 'Dredd's synthy, Vangelis-on-ecstasy score. In-game sound is pure 'Battlefield.' It's the same thunderous cacophony of gunfire and explosions as DICE's entries of this series, and it's a beautiful monster that streams out of the speakers in this game, marred only by a few notable occasions of sound dropping out, or scripted events losing music or dialogue for no reason. 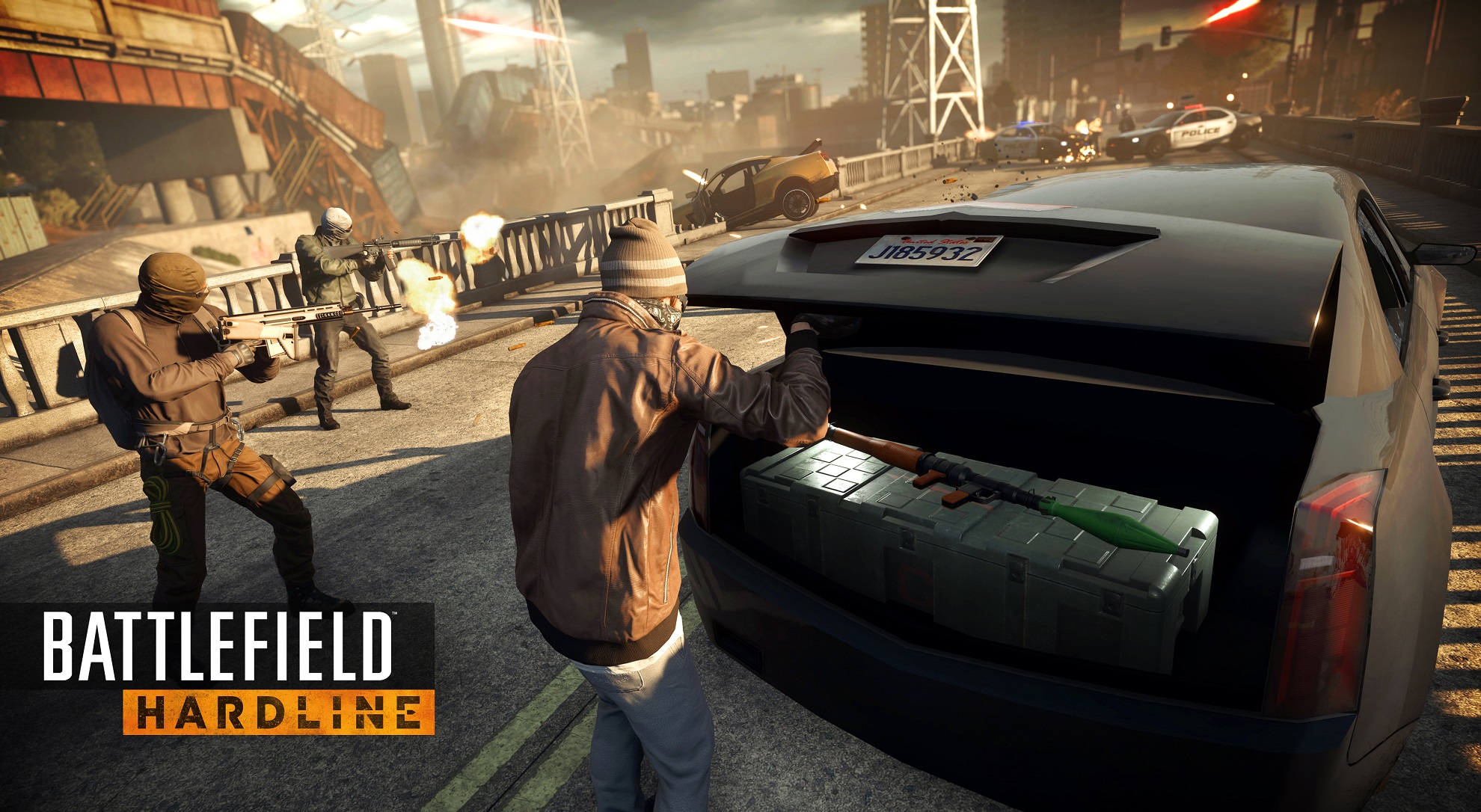 Obviously, a game like this, multiplayer will be a rowdy place well into whenever DICE/Visceral/whoever produces a sequel. But the campaign, with its numerous approaches to combat, slew of unlockable weapons, and profiled scumbags who can be taken into custody, should also keep enough interest going to warrant a look every once in a while. 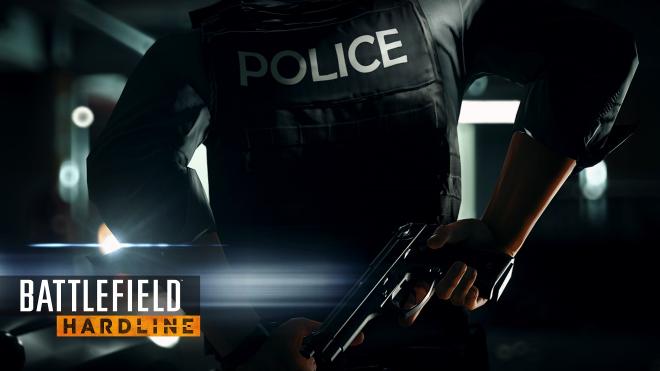 As a whole, 'Battlefield Hardline' manages to reinvent 'Battlefield' as a goofy cop drama, and as a successful one, though its ambitions and advancements are few. It does, however, succeed in freshness, a much-needed course correct away from its grim wartime roots into something far more likely to warrant repeat binge viewing ahead of the next season--er, game, even beyond its ever-lively multiplayer.