There have been games that have successfully emulated the atmosphere of the Old West—most notably of which being the 'Red Dead' series—but compared to many other video game settings, games featuring revolver wielding cowboys in dusty plains and deserts aren't in the highest supply. Thankfully, Ostrich Banditos' 'Westerado: Double Barreled' is looking to fill an indie-sized gap as a great Steam Western.

While I may not be the biggest fan of old Western movies, I do adore the feel of the Wild Wild West. Outlaws, vigilante justice, old-fashioned guns everywhere… in our creative minds, America's expansion to the west is far more romanticized than what it actually was, and that's just the way I like it.

Despite being the series' first commercial release, 'Westerado: Double Barreled' is actually the second game in the Westerado series; the first, simply titled 'Westerado', is a free Flash game. Actually, it's better to think of 'Double Barreled' as more of a beefed up version of the first title than a full on sequel, as the two games have a very similar setting and storyline. 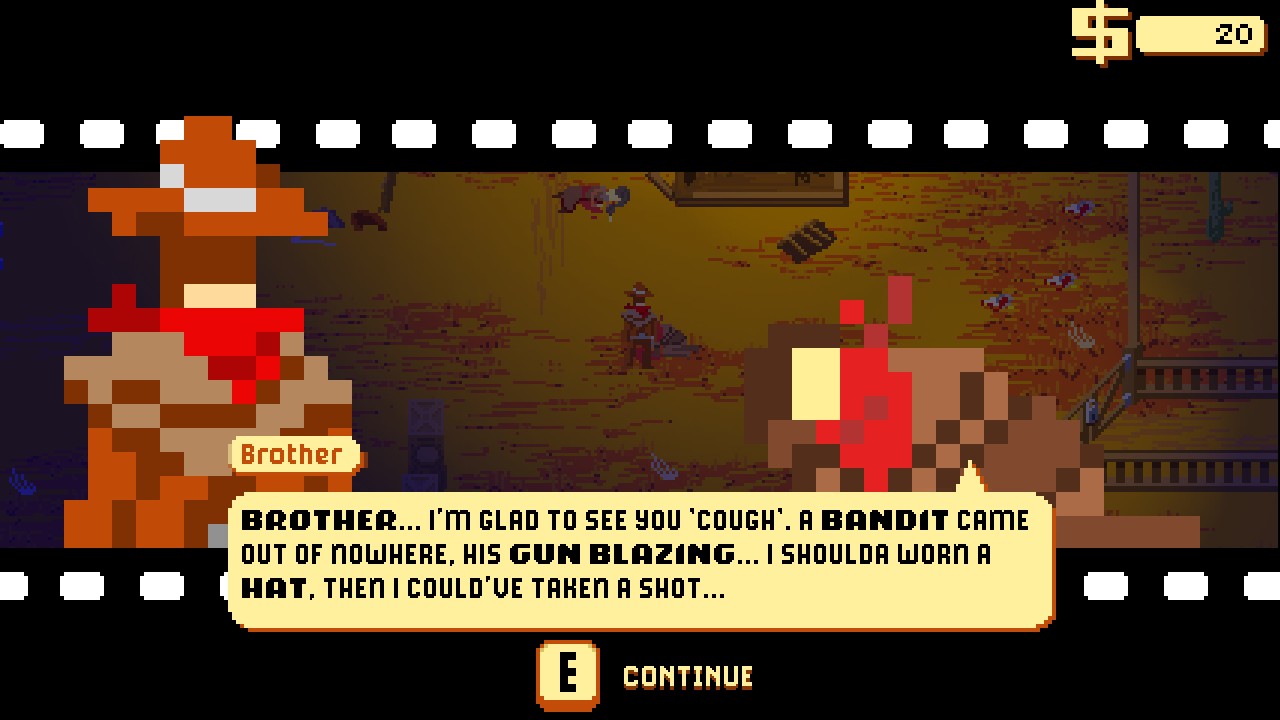 In 'Westerado', you take the role of a lone gunman who is out to avenge his family. The ranch was burnt to the ground and your mother and brother killed, and he will find them and kill them, even if that means going to hell and back to do so. The problem is, he has no clue who the murderer is, other than a vague clue given to him by his brother before he died…

So, how does one go about trying to find this needle in a haystack? Many of the denizens of 'Double Barreled' have more clues about the murderer, to help narrow down the potential criminal—but they won't give this information up easily. In order for them to help you, you have to help them first. These problems can be as simple as dragging a drunken husband home, to stopping a war from breaking out. By being a (usually) do-gooder vigilante, the player will inch ever closer to the murderer's identity.

And of course, there will be lots of gunplay. With bandits roaming the wilderness and literally everyone owning a firearm, 'Westerado' is not afraid to drop the player in the middle of a firefight at the drop of a hat. However, gunplay does work a little differently from most games; in order to fire a bullet, you have to draw the weapon, ready it, and then finally fire. It's it replicate the more old-fashioned weaponry, and the mechanic works wonderfully here. Players will have to carefully aim their shots while dodging bullets, making sure not to waste the shot they've set up. Going in guns blazing takes on a bit of a different meaning here, and quite honestly it makes gunplay far more satisfying than the typical shooter offers. 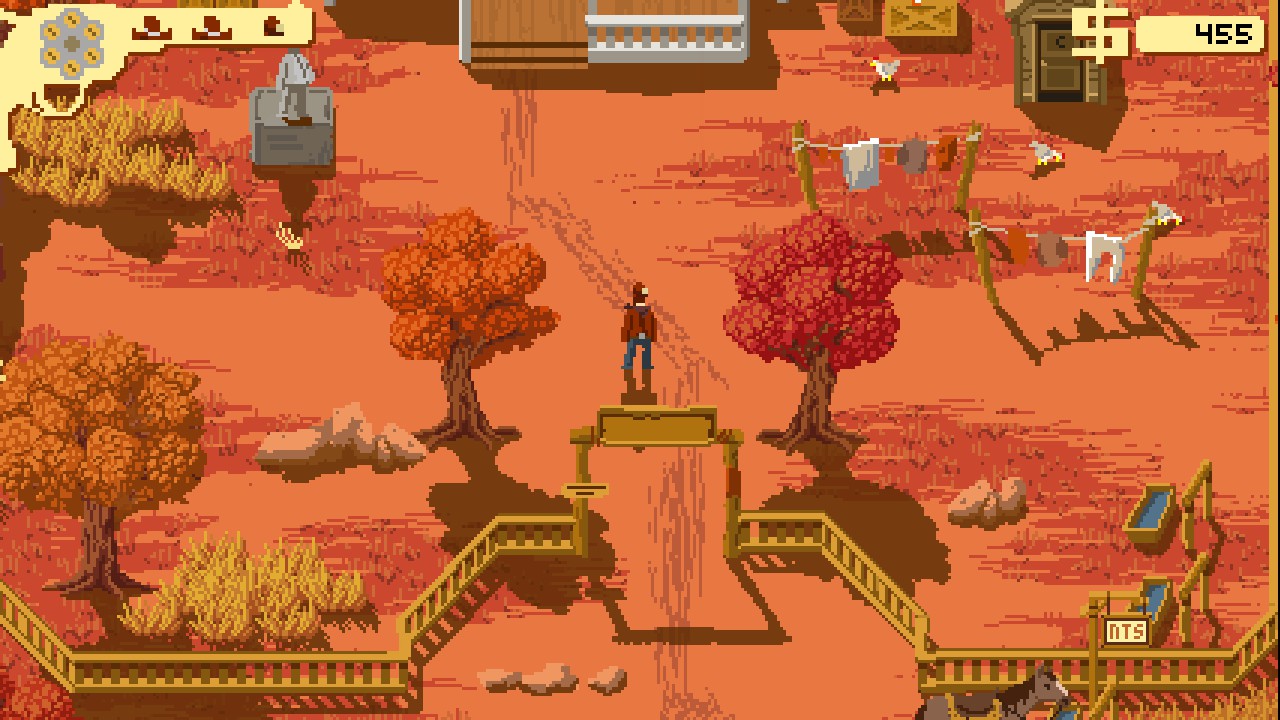 That's not all you can do with a gun, however. At any point during any conversation, the avenging ranger can pull a gun on the NPC, to various effects. This could, for example, scare the person into revealing information they otherwise wouldn't have, or even make them angry and unwilling to talk. It's a neat thing to be able to do, although it admittedly gets less use than one would think… to the point that oftentimes I forgotten about the pulling the gun out option until it was too late to do so.

'Double Barreled' is also a rather open-ended experience. After the short introduction, the player can go pretty much anywhere at any time, picking up quests and exploring the wilderness of the West. It doesn't matter what order the player takes the quests in, or that even all of them get completed; instead, it's about the adventure, and the experiences that 'Westerado' has to offer. In that light, the game is an absolute delight to play. I spent a lot of my time simply roaming the wilderness in between towns, filling up my map and taking out bandits, eventually saving up enough money to buy my lady a wonderful house by the river. Not a single one of these tasks got me closer to the murderer, but I thoroughly enjoyed what I was doing, and didn't feel like I was wasting my time. Few open-ended games make me feel like that when 'going off on my own', so it's a big plus in my book that I didn't feel shoe-horned into doing certain tasks.

As an aside, I did run into a few glitches while playing 'Westerado'. Most of them were harmless, but I was unable to finish a couple of quests because the either the quest giver or a quest flag bugged out. Although, since I was playing a pre-release build, most of these bugs are expected to be ironed out by the game's official release. 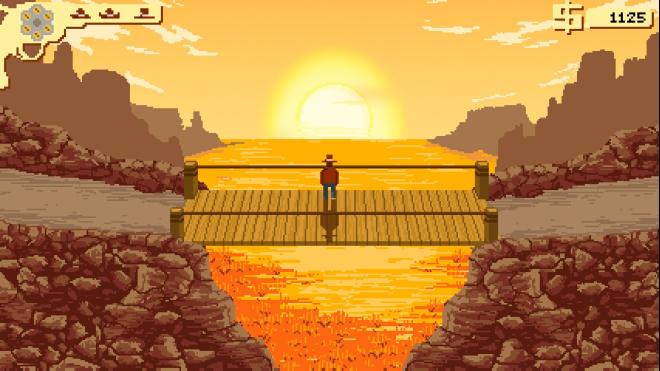 'Westerado: Double Barreled' subscribes to a more retro asthenic for its Western setting. While it does not adhere wholly to a 8- or 16-bit style, the Steam title does use pixels for the characters and backgrounds. The character models are basic, but they work well enough in capturing the game's aesthetic. Characters do look a little weird when the game zooms in on faces during important cutscenes, but it feels less cheap and more part of the 'Double Barreled's charm.

The rest of the game's graphics are incredibly detailed, and quite colorful given the dusty Old West setting. The lush, colorful set pieces really make exploring the areas between towns and important places a lot of fun, and oftentimes I would shun the fast travelling horseback option in favor for exploring just a little more of the wilderness that made up 'Westernado'. 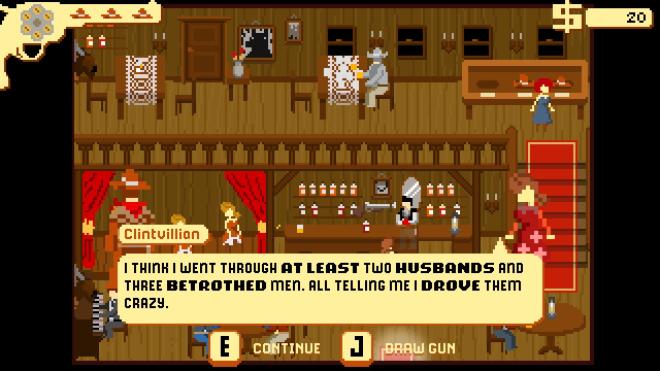 I must admit, I didn't think 'Double Barreled's soundtrack would be one of my highest praises for the game, but there you have it. The game's tracks absolutely nail the atmosphere of the Wild West, and the music is catchy and wonderful to listen to. With the game's graphics emulating a bit of a retro feel, I was worried that the music would follow suit, but I was glad to be proven wrong.

Even the sound effects are top notch. Drawing and readying your puns are satisfying, and the loud bang of the shotgun and pistols firing pack a real, deadly punch worthy of such olden weapons. 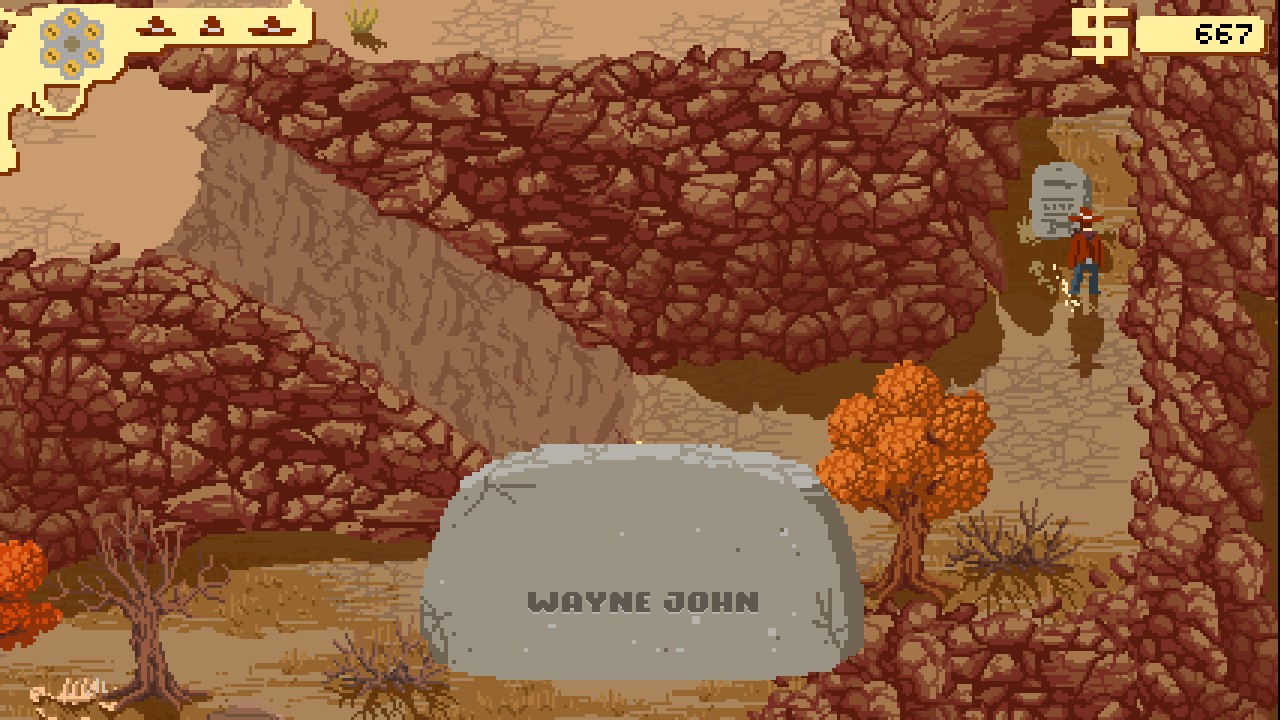 Despite being a relatively short adventure (my first playthrough took about three hours), there is quite a bit to do after the player completes the main quest. For starters, the murderer is actually randomized each time, so each playthrough you're looking to pick out a different face from the crowd. Additionally, many of the game's quests tend to be at odds with one another. For example, oftentimes you cannot help both the Oil Typhoon and the ranchers, as the two groups' goals get directly in the way of each other. A second (or third) playthrough will allow players to take different paths to finding the murderer, with different quests and, by extension, different achievements to unlock.

Finally, after beating the game, more playable characters are unlocked, which of course give slight variances to the way 'Double Barreled' is played. It's a nice touch, although it isn't as impressive as the branching quests and randomized killers. 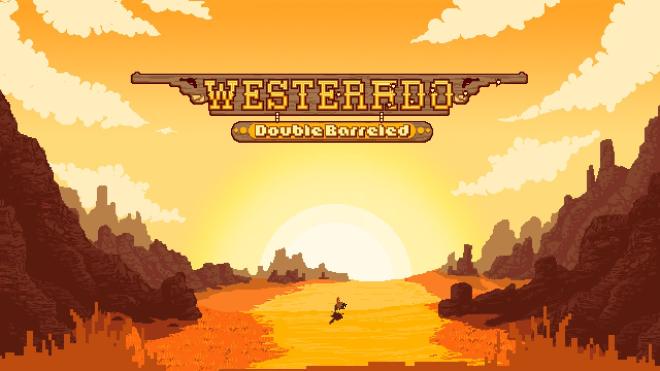 If nothing else, 'Westerado: Double Barreled' is a blast to play. The gameplay is solid, and both the mechanics and setting are top notch. If you're looking for an Old Western to waste away your afternoon, don't look towards another John Wayne movie, grab this great indie title instead.