Turtle Beach GRIP 300 Mouse reviewed mainly with Windows 7. The bundled Turtle Beach DRIFT mousepad is included in this review. The GRIP 300 mouse is also available on its own here.

For the longest time, Turtle Beach has meant gaming and has meant audio. (They currently have the only fully wireless headset for the Xbox One for example.) But now, the stalwart gaming accessory producer is stepping into the world of PC input devices. Specifically, with a full line-up of keyboards, mice, and even mice pads. We've reviewed their flagship keyboard, the IMAPCT 700 here, and now we look towards the ever important computer mouse arena.

With the GRIP 300 Gaming Mouse Kit, Turtle Beach is offering their brand new GRIP 300 Optical Gaming Mouse along with their new DRIFT mouse pad in one bundle. The GRIP 300 features an Avago sensor, Omron switches, PC and Mac support, as well as multiple DPI and polling rate settings, all in a corded, ergonomic, non-slip package. The DRIFT mousepad is half rubber, half smooth microfiber, and is meant to be a fast mouse surface. Together, the two items are representative of Turtle Beach's push towards PC accessories.

Gaming mice (or nicer mice in general) are not a new concept. Since the year 2000, more and more mice options have appeared. While many "gaming" features are as fluffy as cotton candy, gaming mice of all kinds can do their users good service in areas like performance, ergonomics, and reliability. In that way, gaming mice ought to be the first place buyers look when they decide to go beyond whatever free mouse came bundled with their old PC or Mac.

Still, there are lots of gaming mice, many with some pretty crazy or otherwise specialized features. The trick then can be finding a mouse to love that gets the job done and done well. 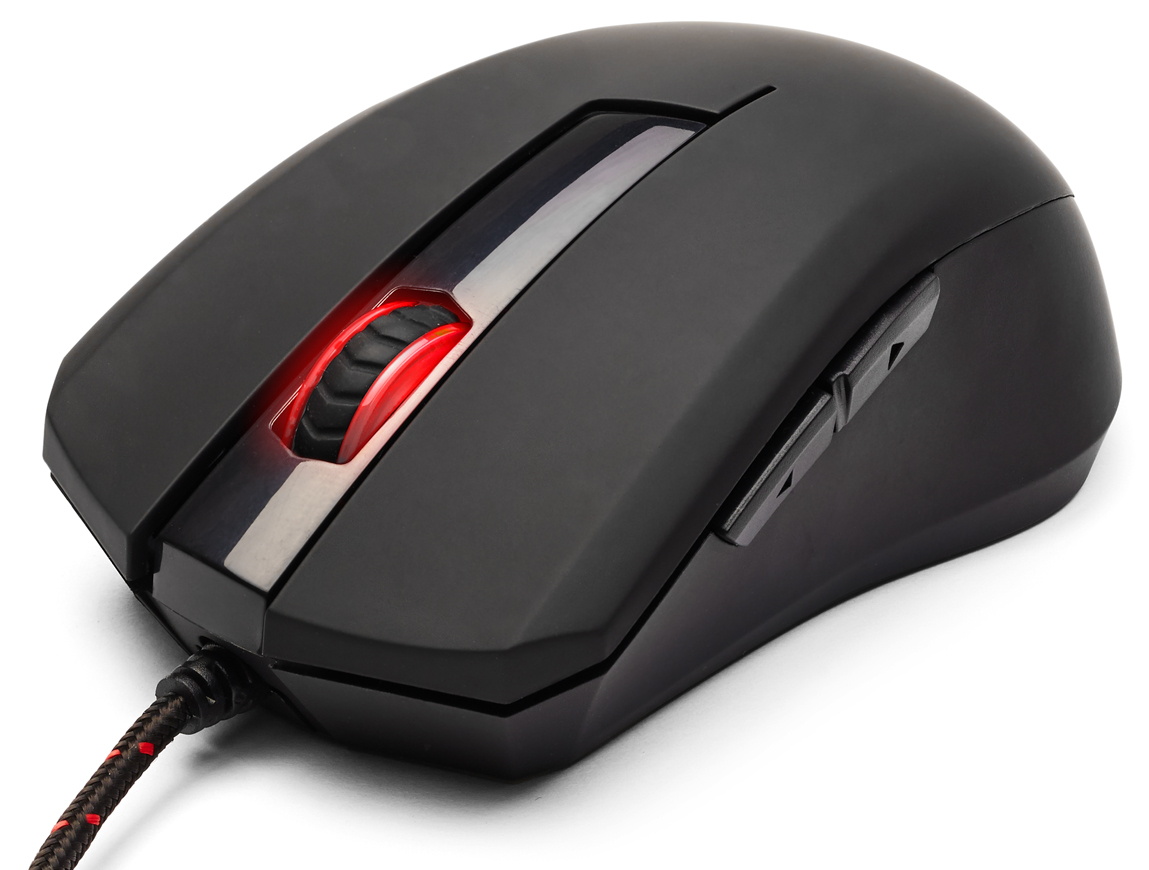 Welcome to Turtle Beach's GRIP 300. Built with the help of Nordic Game Supply and certain premium parts, this is a mouse is a very straightforward in its feature set. On paper, the GRIP 300 could be the product of a user survey, the subject of which would be "list your must-have gaming mouse features."

This is a corded USB mouse, which, as is the conventional practice, is the most reliable and best performing kind. Second, this an optical mouse. (More on optical vs laser later.) Third, there is an adjustable DPI setting. Fourth, there are five buttons and a scroll wheel. Fifth, the cable is nylon braided, the mouse is non-stick (rubberized) and there are multiple large Teflon feet. The mouse's looks would likely not be on the list.

As with any such list, several features might not might make the cut. Some of those feature are to be found in the GRIP 300's bigger brother, the GRIP 500, which uses an Avago laser sensor, has programmable buttons, macros, and custom illumination.

Thus, the GRIP 300 appears very conventional. Its grip, while ergonomic, is completely viable for lefties right down to the left side buttons. The one less common feature for the GRIP 300 is the adjustable polling rate.

While the GRIP 300 may very well be the callous product of market research and calculating engineer labs, there is very little fault to be found in its performance. First off, there's no bloatware. Plug it in and go. There are two slightly recessed switches on the bottom side, one for DPI and one for the polling rate. It's an interesting design choice, but the thinking is clear, set it and forget it unless dramatically inclined to make a change.

For polling, there are 125, 500, and 1000hz settings, but 500hz is perfect for me in most situations. That may change as display tech continues to evolve, so it's nice to know the 1000hz option is there. Likewise, 1750 DPI works great for me in nearly all games and 3D applications. Many gamers may want for something more sensitive, (like the GRIP 500's crazy 8200 DPI), but I suggest testing first. There sort of is an on-the-fly DPI capability. That is, if the user is willing to pick up the mouse. The hardware setting of DPI makes for one big difference between the GRIP 300 and any other adjustable mouse I've used. The DPI never changes inadvertently, even when switching to another system. It's a small detail, but I appreciate it. 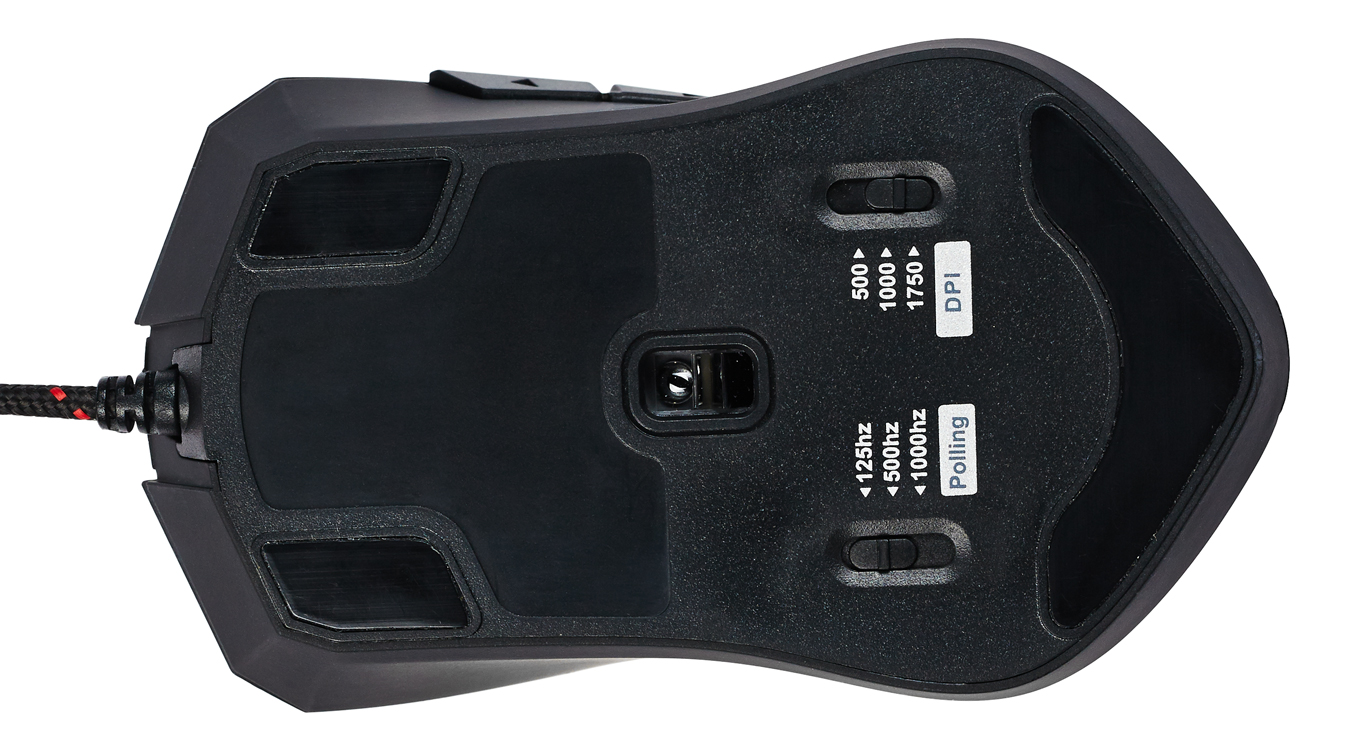 The five button action is exact, and the two side buttons, which can often be a trouble area, are perfect. The scroll is very much focused on gaming. There is no side-to-side/tilt scroll wheel function, which I usually find to be pretty erratic in use, so it's not missed. What is missed is Logitech's switchable hyper-fast scroll wheel, the MicroGear precision wheel. The fast mode of that wheel has no real gaming application but is great in long docs, web pages, and various 3D applications. That wheel appears to still be a Logitech exclusive.

The GRIP 300's shape allows its three sizable Teflon feet to do their thing, which along with the optical sensor, makes the mouse silky smooth to move around. This is only accentuated by the DRIFT mousepad, and the fast glide fits my preferences to a T.

After cruising through 'Borderlands 2,' 'Call of Duty: Advanced Warfare,' 'StarCraft II,' 'Dota 2,' and even the classic 'Outlaws,' my most important conclusion is that optical mice have come a long way in the over the past ten years. Even though the tech is very similar, laser mice get a certain marketing push that is more unfounded now than ever. Setting aside those select users need more than five buttons, macros, or crazy high DPI, and I consider the optical GRIP 300 to be tournament grade.

The ergonomics are a something of a hybrid design. It's a low-profile claw design not meant to support a palm. The mouse is symmetric, but the two buttons on the left are meant for a right handed thumb. They can be used by a left-handed pinky, but it takes a little getting used to. Though I'm used to a more right-handed palm support design, the GRIP 300 is quite comfortable. The non-slip texture has a good feel and makes for a clean look. I like the texture so much that I wonder that so many mice go for the hard plastic. The scroll wheel also has a rubber texture to it 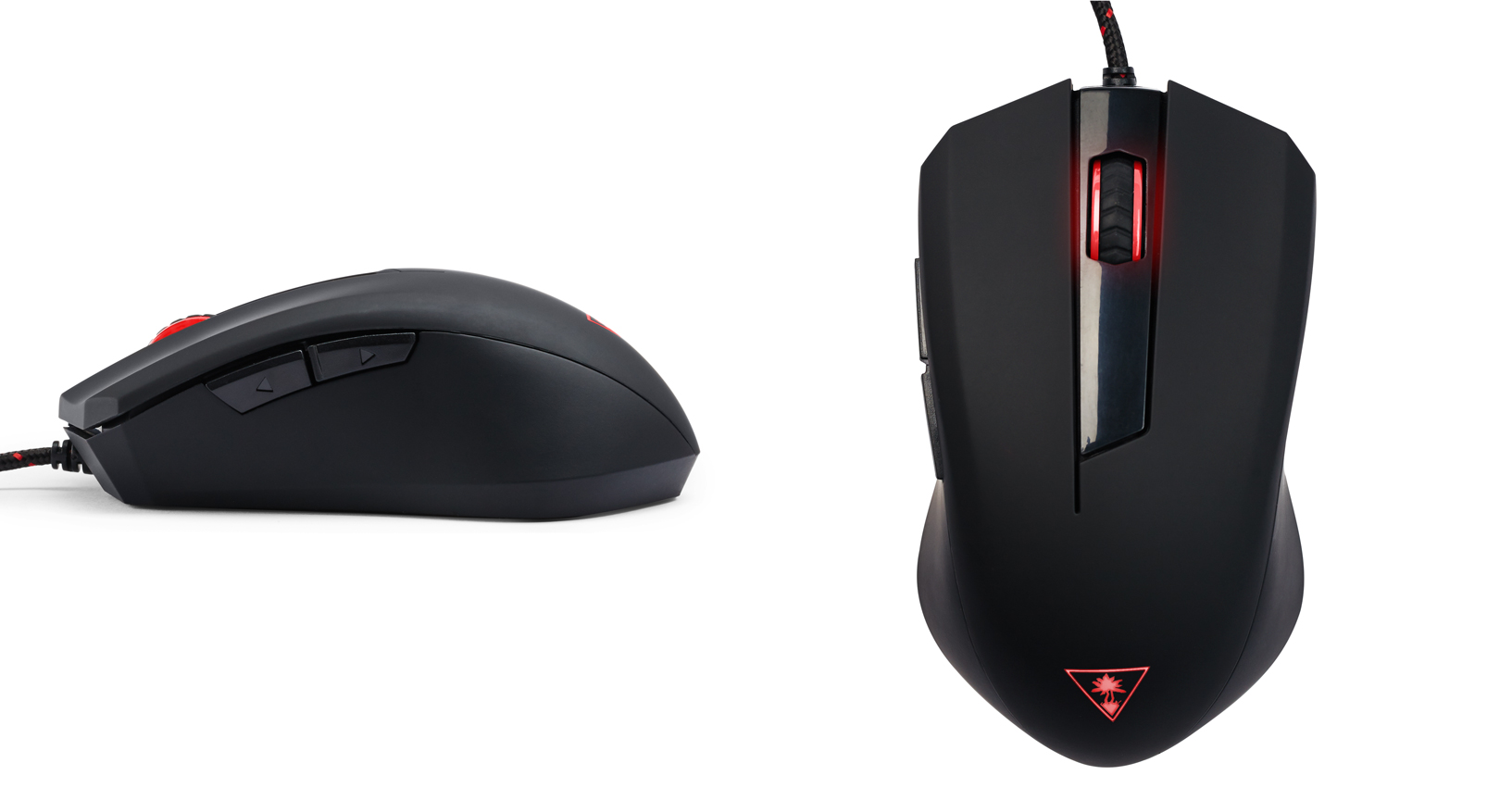 I'm not a huge fan of mouse weights, and they aren't missed here. The GRIP 300 manages to be very light without feeling slight or cheap. Most of my waking hours are spent with a mouse and keyboard, and the GRIP 300 nails a premium feel to match its slick performance.

I'm not trying to be shallow here, but some mice look better than others. The GRIP 300 is all black, mostly matte black, and has an illuminated red Turtle Beach logo to go with the red in the scroll wheel. The nylon braided cable includes a built-in Turtle Beach Velcro strap and Ferrite core. The one thing I don't love is the use of red accents in the nylon. In total, the GRIP 300 takes much of its look from Razer mice. It also looks a bit better in person than in pictures, but my main take away is that it looks good. 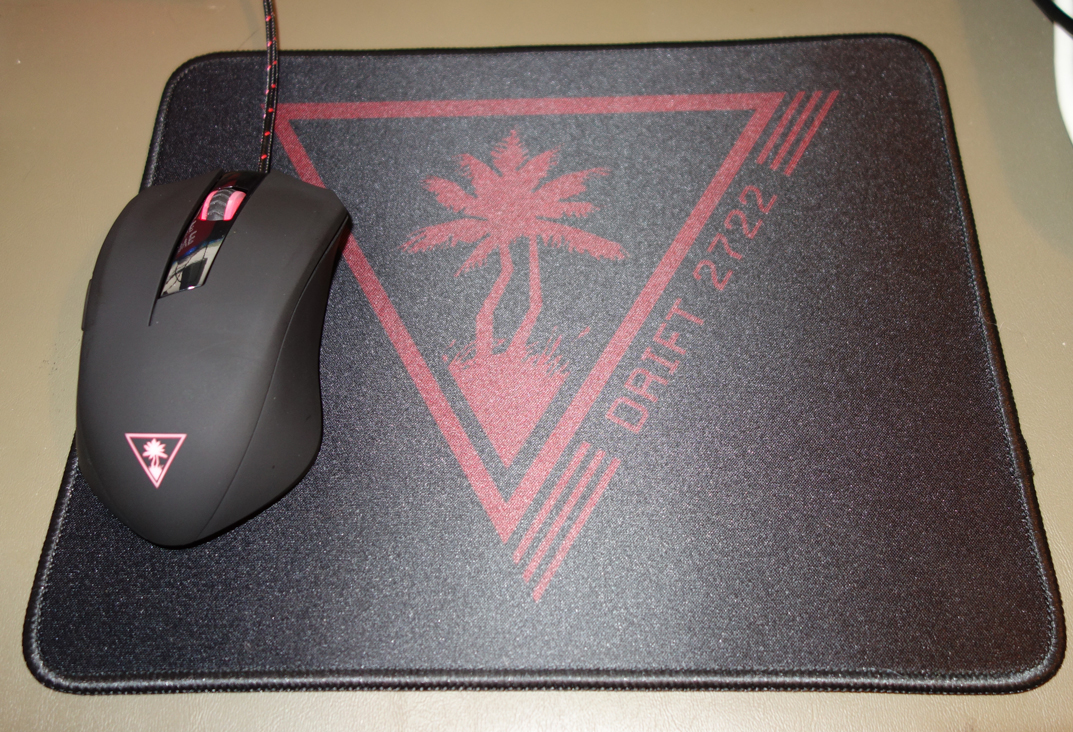 The DRIFT mousepad included in the GRIP 300 Gaming Kit is labeled Medium size at roughly 9 x 11 inches. That's the size of a classic mouse pad. The black microfiber surface features a deep, blood red Turtle Beach DRIFT 2722 logo that makes for a subtle design. I usually go for hard coat mouse pads, so I was surprised to find myself liking the DRIFT. The material gives just enough cushion that small debris doesn't get in the way. For the sake of the review, I poured some Diet Coke on the top and watched as it sat in a glob on top of the mousepad. Eventual I wiped it up, and the apparently Scotguarded DRIFT seemed no worse for it.

Getting the DRIFT included is an extra $10 bump in price over the GRIP 300, which I think is worthwhile, but not necessarily required.

The performance, ergonomics, and even the looks are winning attributes for the GRIP 300. That just leaves reliability, which is not something that can be told in a week's use. The build quality seems great, and I even took the mouse and used it like a whip on my office couch. Not a definitive test by any measure, but the abuse appeared to have no effect on the mouse. I expect it will hold up over the long hall and wouldn't hesitate to throw it in a bag. 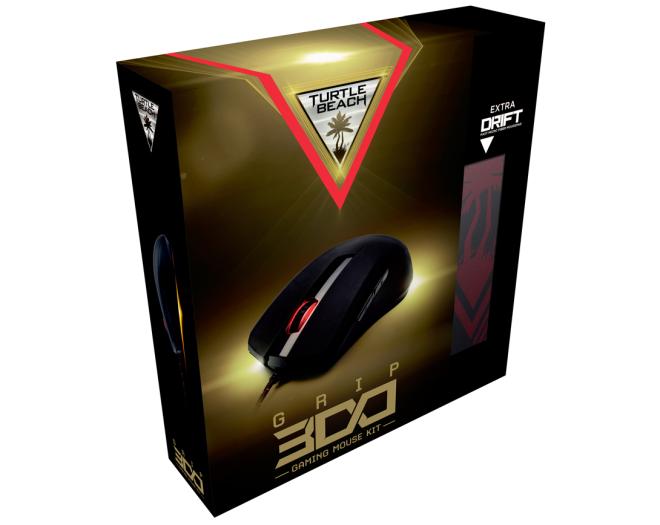 The Turtle Beach GRIP 300 Gaming Kit checks all the right boxes. It gets all the major features that gamers care about right, without any of the fluff that is normally forced upon buyers. I'd love it if it had a MicroGear wheel, but while I can respect that some users would want the custom colors, macros, or higher DPI of the GRIP 500, I think the GRIP 300 is the perfect mouse to issue to anyone who might want to venture over and be serious about a FPS, RTS, MOBA, etc. At $49.95, the included DRIFT of the Gaming Kit is a nice pick-up as well, but buyers can also feel good opting for the $39.95 mouse only package. The GRIP 300's only surprise is that it nails the performance, looks, and feel without stumbling over a superfluous feature, software package, or high price.