The Game Itself
3 Stars
The Video: Sizing Up the Picture
3 Stars
The Audio: Rating the Sound
3.5 Stars
Replay Factor
3.5 Stars
Bottom Line
Worth a Look

'Blue Estate The Game' is an on-rails shooter that was first released on June 24th, 2014 for the PlayStation 4, and again in February for the Xbox One. Now it's time for the PC debut. The game is based on a comic book series published by EZD Productions.

'Blue Estate' is an FPS rail shooter, a genre that was immensely popular in arcades in the 1990s but has since fallen into relative obscurity. Instead of the free movement typical of shooters (and action games in general), all movement and perspective in a rail shooter is determined from the start. All the player has to do is point and shoot. Enemies run on screen in waves and return fire, throw projectiles, and try to get up close and melee. 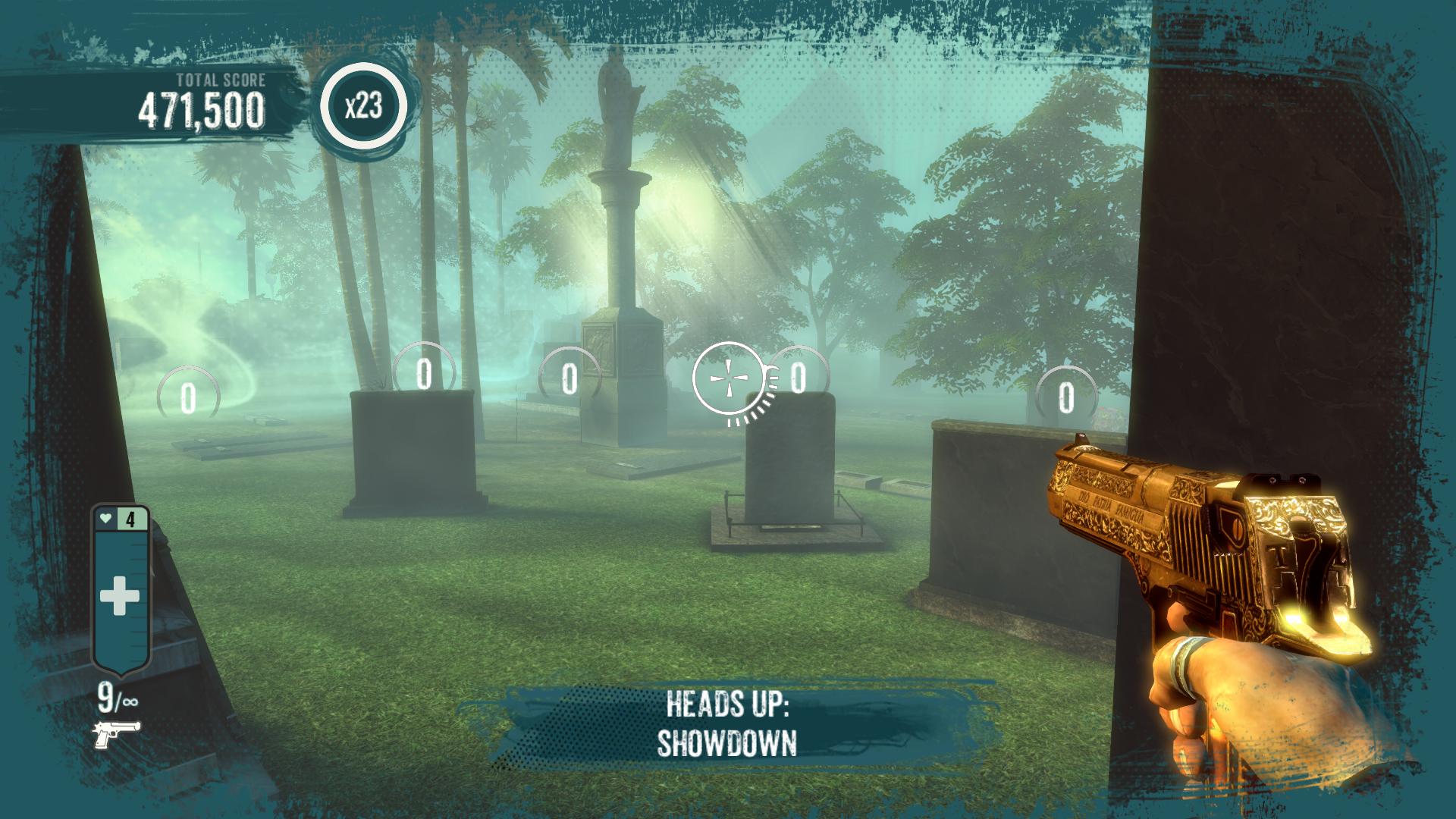 This is thoroughly an arcade title, eschewing a strong storyline in favor of frenetic shooting gameplay, over-the-top set pieces, and an emphasis on racking up huge amounts of points to defeat high scores. In between the normal shooting segments there are frequent slow motion fights, as well as mini-games where I had to shoot targets in a predetermined order, achieve only headshots, or fulfill other objectives for big point rewards. A standard pistol with unlimited ammunition is the default weapon. It is reliable and reloads quickly, but does unimpressive damage. Throughout each level more powerful guns can be picked up such as shotguns and revolvers, but require frequent ammo pickups. Like the arcade games of yore, health pickups are a thing as well, and the player can only die a certain number of times before the level must be restarted.

The shooting is not perfect, but for the most part it is a smooth, visceral experience. Gangsters run on screen and are quickly blapped in style, paving the way for even more of their gung-ho buddies. My accuracy was pretty poor in the beginning, rusty as I am with rail shooters, but as I improved the game became even more satisfying. Flicking the mouse around to blast unsuspecting gunmen nearly as soon as they could get on-screen is rewarding, and the gameplay doesn’t get stale even though it doesn’t change much throughout the game. That’s a very good thing, as completing the campaign on normal difficulty only takes three or four hours. There are three boss fights, with only one among them being any good.

The setting of 'Blue Estate' is a seedy criminal underworld, but with a decidedly less serious element. The first boss, for instance, is an obvious caricature of Kim Jong Un, with dwarfish stature, superhuman speed, and a taste for crossdressing. I am not familiar with the comic series, but if it is anything like the game, it is full of crass humor, scantily clad women, misogynistic men, and extreme violence. It is cartoonish to the point of buffoonery, with jokes that try very hard to be funny but usually don’t quite make it. The gameplay is frequently interrupted with chatty story segments, which for the most part, don't stand well on their own. From what I could gather there is a mafia boss who has traded his son to Asian criminals for a beloved racehorse named Blue Estate. The don’s son has to save his stripper girlfriend from the same criminals. A former Navy Seal is hired to do something or other with Eastern European criminals. After that I just kind of floated from one encounter to the next and the narrative became white noise. 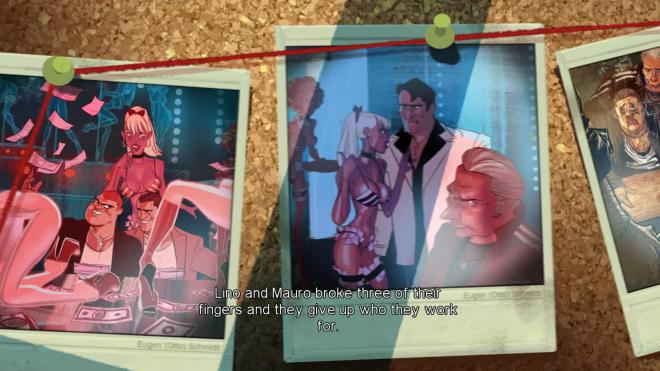 'Blue Estate' isn’t beautiful, but doesn’t look bad most of the time. The camera moves so quickly that appreciating the visuals can be problematic, but most character models and environments have decent textures. There is a wide range of deep colors, but the effects aren’t particularly outstanding. The engine is capable and I never experienced any slowdowns or stutters. 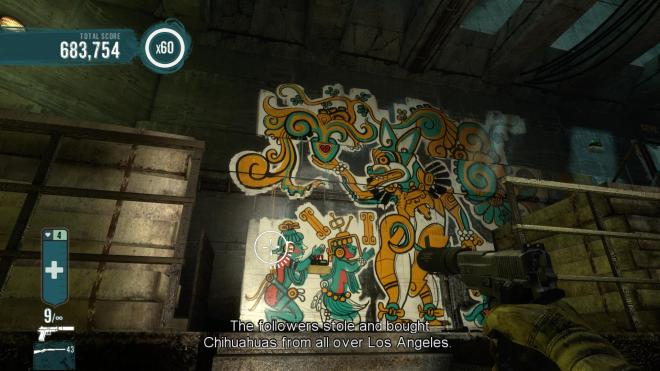 The music is competent and fast-paced and keeps the energy level high throughout each level. It alternates between electronic and rock themes. Sound effects are more arcadey than realistic, and the gunshots in particular could be more resonant. The voice acting isn’t that good, which is a shame because everyone is talking so much.

Every level in story mode can be endlessly replayed to chase after high scores and achieve better performances in each of the very important categories, such as the average life of enemies or how many times they were shot in the groin. This is fun but, despite the game’s short length, the levels are individually pretty long and so replaying can get tedious after a while. There is also a two-player mode in campaign, and an arcade mode where the story maps can be played with even more of an emphasis on points and performance. 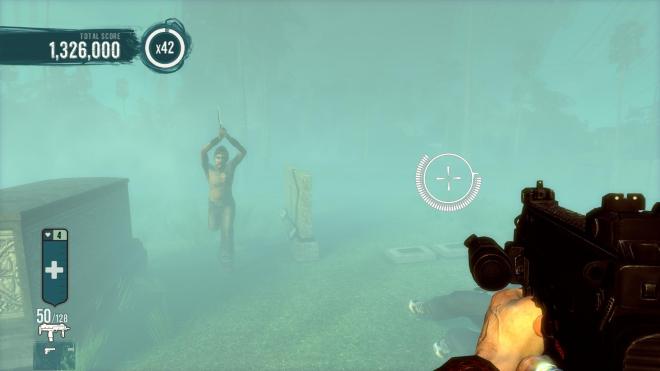 As a video game, 'Blue Estate' is just above average. As a rail shooter, it’s quite decent, especially if you can forgive the grating dialogue and endless Chihuahua jokes. At only a few hours long it may not give you the most content for your money, but the replayability helps. Fans of on-rail shooters can feel good stepping right in. Eventually I suspect Steam will offer this low-priced affair for an even lower price, so I recommend keeping it in your wishlist.