The Game Itself
3.5 Stars
The Video: Sizing Up the Picture
2.5 Stars
The Audio: Rating the Sound
3 Stars
Replay Factor
3 Stars
Bottom Line
Recommended

War for the Overworld

The 'Dungeon Keeper' franchise debuted in the late 90s as a mix of real-time strategy and god game. It subverted the normal RPG stereotypes by giving the player control of an evil dungeon lord who must defend his home against do-gooding heroes and adventurers. In 2009, a group of fans began work on 'War for the Overworld', originally intended to be a continuation of 'Dungeon Keeper' and even make use of the intellectual property, although the IP plan was later abandoned. In 2012, developer Subterranean Games funded a Kickstarter for the project, and now we have the first real 'Dungeon Keeper' experience in 16 years (this doesn’t include last year’s terrible mobile game bearing the same name).

'War for the Overworld' is primarily a real-time strategy game. An overhead view lets the player build and manage each dungeon, the foundation of which is a dungeon core that can be destroyed, typically resulting in a loss. Around the dungeon core is a thick layer of rock tiles that can be dug out and replaced with specialized rooms, hallways, and bridges. Tiny worker imps scurry around the dungeon, working thanklessly to fulfill the Underlord’s demands and replenish funds by mining veins of gold. After a portal is discovered, minions will spawn into the dungeon and begin their employment in various capacities. The cultist researches magical spells and new rooms, the chunder creates traps and doors, the succubus tortures captured heroes, and so on. 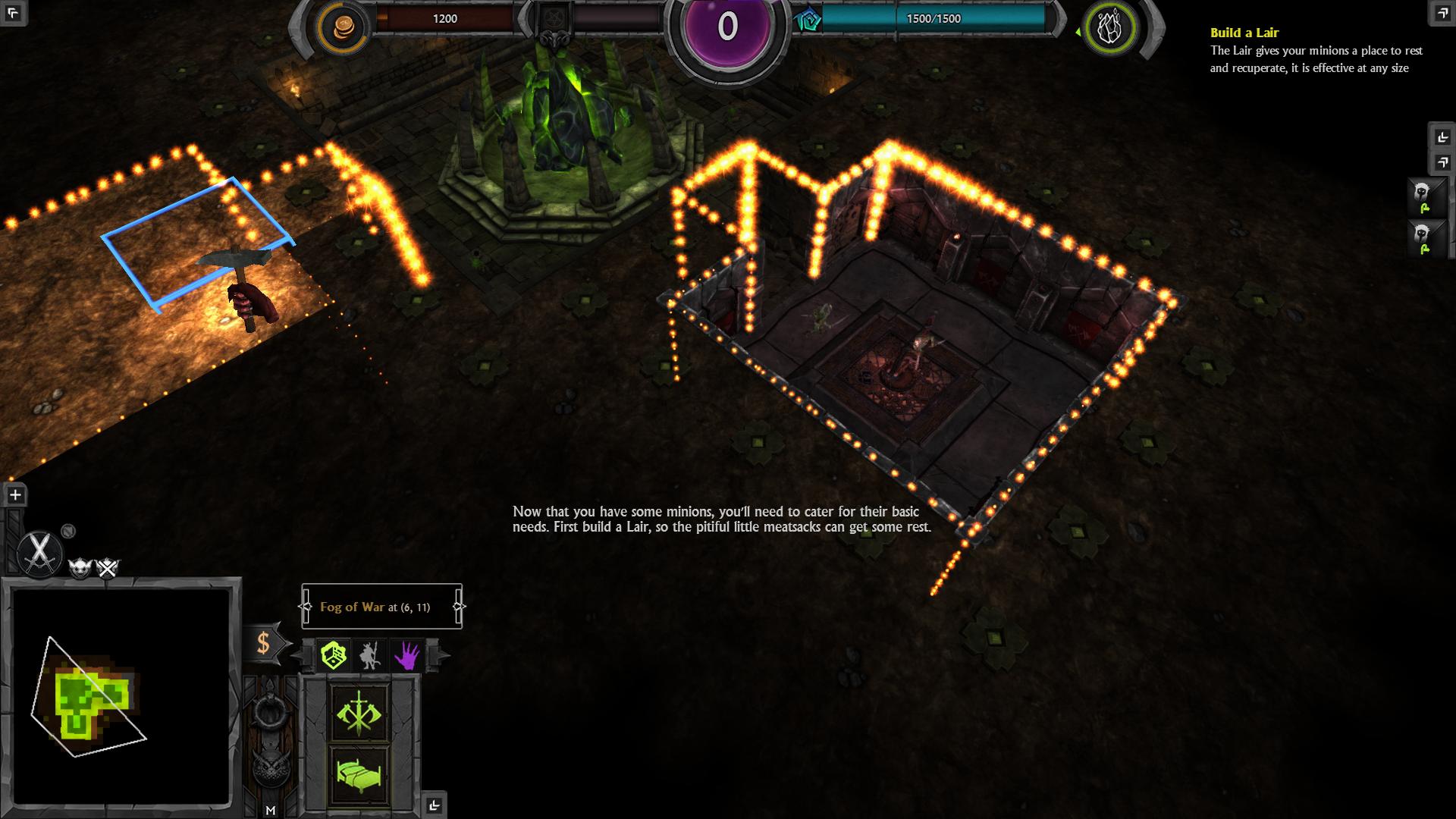 The basic needs of each creature must be met or they will resign their position and leave the dungeon in disgust. A lair room must be built for them to rest, a hatchery spawns micropiglets for sustenance, and a tavern serves as a kind of company store where minions can spend their wages on booze. Other rooms can be used to shore up dungeon defenses. The real joy of 'WftO', just like the original 'Dungeon Keepers', is building the perfect subterranean labyrinth, full of diverse creatures and deadly to heroes. In this regard it thrives, as it has a large number of different options for traps and minions. The tech tree is very tall, and by the end of the campaign, I had a vast array of spells, artifacts, rooms, and rituals, some of which I even knew how to use properly. 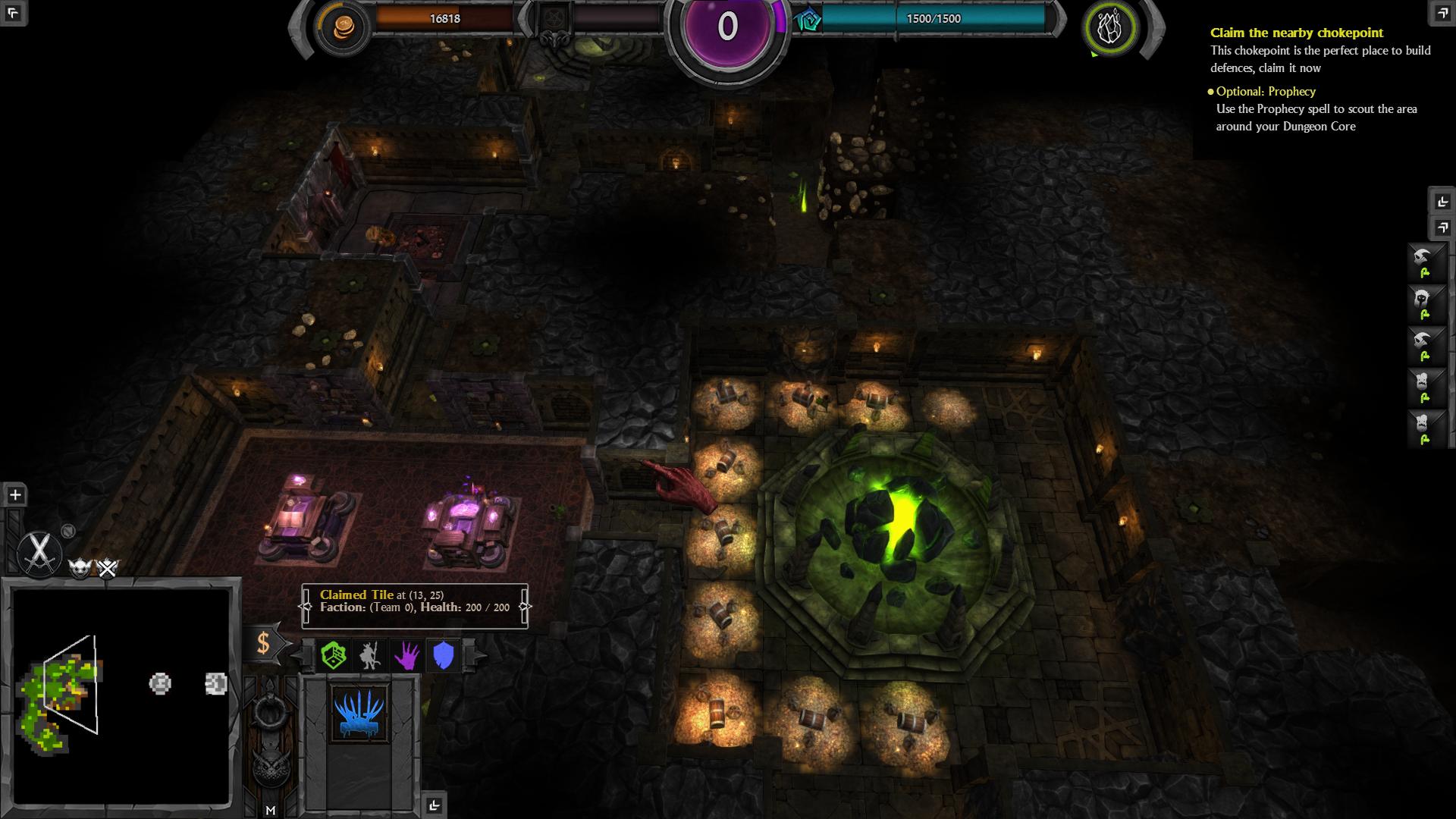 'WtfO' struggles with its presentation. It proceeds slowly, as RTS titles are wont to do, bundling a thin tutorial into several hours of preliminary levels before getting into the real meat of the gameplay. The narrator (the very same Richard Ridings from the first games, hired on as a Kickstarter stretch goal) does a decent job of relaying basic information in an encyclopedic fashion, but little explanation is given for how the rooms and abilities actually work in the day-to-day operation of the dungeon. Before I’m accused of having to be spoon-fed how to play a video game, know that investigation on my own yielded little reward. The in-game UI tooltips only displayed string errors, and making the best use of the possession spell, a 'Dungeon Keeper' classic where an individual minion can be controlled in the first person, was even less obvious. 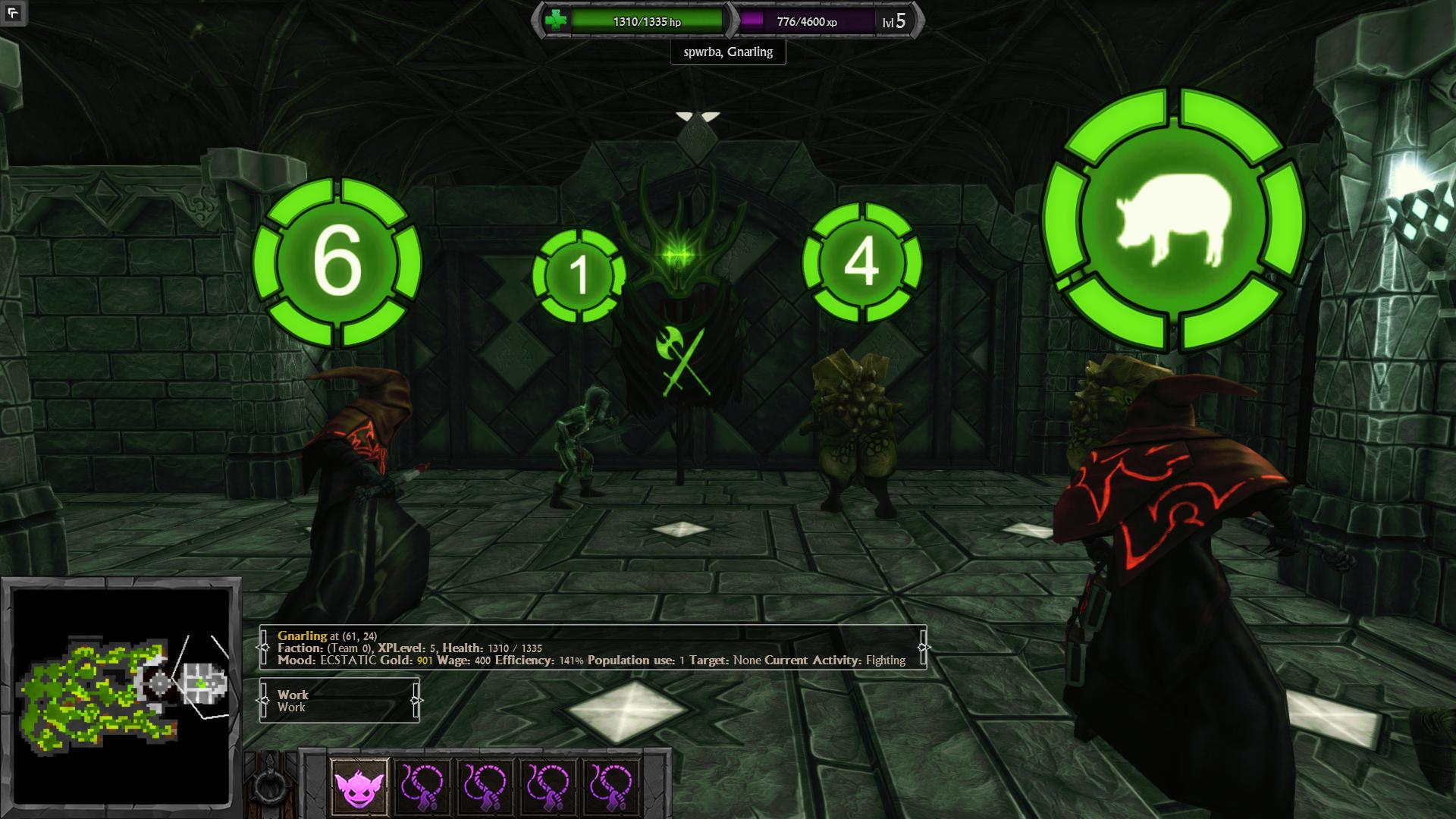 There is an alternative to a decent tutorial, and that is the awesome sandbox mode. In sandbox all of the gold and spells are unlimited and the map is huge, allowing me to learn the mechanics at my own pace without smarmy heroes stomping around my lovely dungeon in their annoyingly self-righteous armor. Even after playing the other modes for some time and learning how everything works, I still frequently return to my sandbox dungeon and just relax. It’s a sort of a Zen garden of evil.

Combat can be a bit of a headache, as the creatures can’t be controlled beyond setting their rally point. Here’s the basic workflow: I notice a group of meddling dwarves setting up demolitions on the wall of my beloved sacrificial chamber. I set a rally point near the dwarves to induce my minions to converge on that location, abandoning whatever pitiful little activities in which they were engaged. Then, en route to defend the dungeon, the minions get distracted by just about everything, especially wandering hero patrols who pose little threat. The dwarves then bring down my walls and breach the dungeon. (Minions can be sorted into different fireteams for granular control, but this is a clumsy process.) 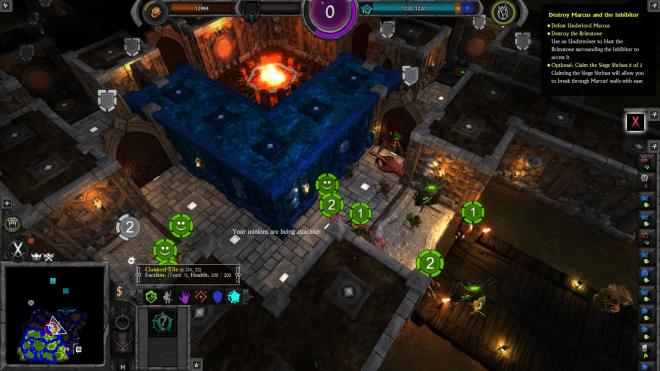 'WftO' is powered by the Unity Engine, very popular in indie circles and usually quite good. There are some problems here, especially with the cursor, which is a huge demonic hand with little precision. The visuals of the game look better than 'Dungeon Keeper 2' (released in 1999), but not by much. The models and textures are blocky and the light sources are washed out. 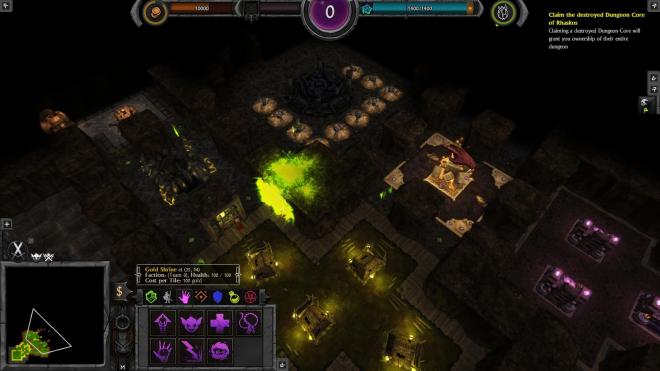 As mentioned, Richard Ridings has returned to voice the mentor, and is the lynchpin of the game’s sound. The game has a soundtrack, but it’s quite faint. It’s usually covered by the sounds of daily life in the dungeon - the hammering of the chunders, the screams of pain, the crazed mutterings of the cultists, etc.

Besides the campaign, which is a good length, 'WftO' offers sandbox, survival, skirmish, and multiplayer modes. Besides the sandbox, the modes are not actually finished, made evident by the in-game announcement tiles at the main menu promising a re-release later this year. They do function, but many of their features have been stripped down while the dev team works on them (especially survival mode, which could have been a lot cooler). Still, in their current state they do provide some entertainment. 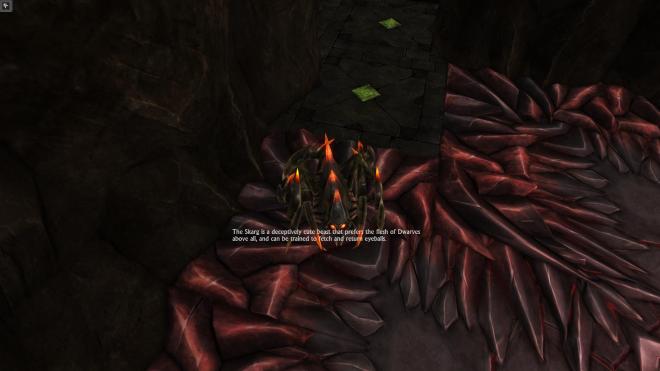 'War for the Overworld' is a game made by people who dearly love 'Dungeon Keeper', but love alone does not a good game make. The current form of the game is basically a beta, and has a lot of cleaning up to do. Despite its issues, which range from nagging to serious, I am having a blast playing it. Don’t come here expecting a polished product, but don’t let that stop you from enjoying it.