PS4 version reviewed. 'Shovel Knight' is cross-buy on the PS4, PS3, and Vita.

Wayforward Technologies has led the charge for preserving the 8-bit gameplay glory days wherever they can (they're the folks responsible for that pretty 'Ducktales' remake from a few years back, after all). But a few of their rank have taken it a step further by splintering off to form Yacht Club Games, and spearheading their first major release, 'Shovel Knight', an NES game in all but console. The game made huge waves when it debuted on the WiiU and 3DS. Now it's come to Sony's systems, and they've brought the God of War himself along for the ride.

Anyone who actually lived through the NES days remembers hoping for gaming's future; a gleaming day when games are indistinguishable from cartoons or movies. Now that we've reached that future, ironically, our greatest hopes and dreams involve going back to perfect the low-res 8-bit platformer.

And so we live in a strange time where beautiful, elaborate high def worlds share digital shelf space with games trying their damndest to be 'Mario', 'Metroid', or 'Mega Man'.

'Shovel Knight', on the other hand, is a different beast in that it doesn't want to be those games; it wants to beat those games. The fact that it actually succeeds at that is impressive at least, nigh-miraculous at best. 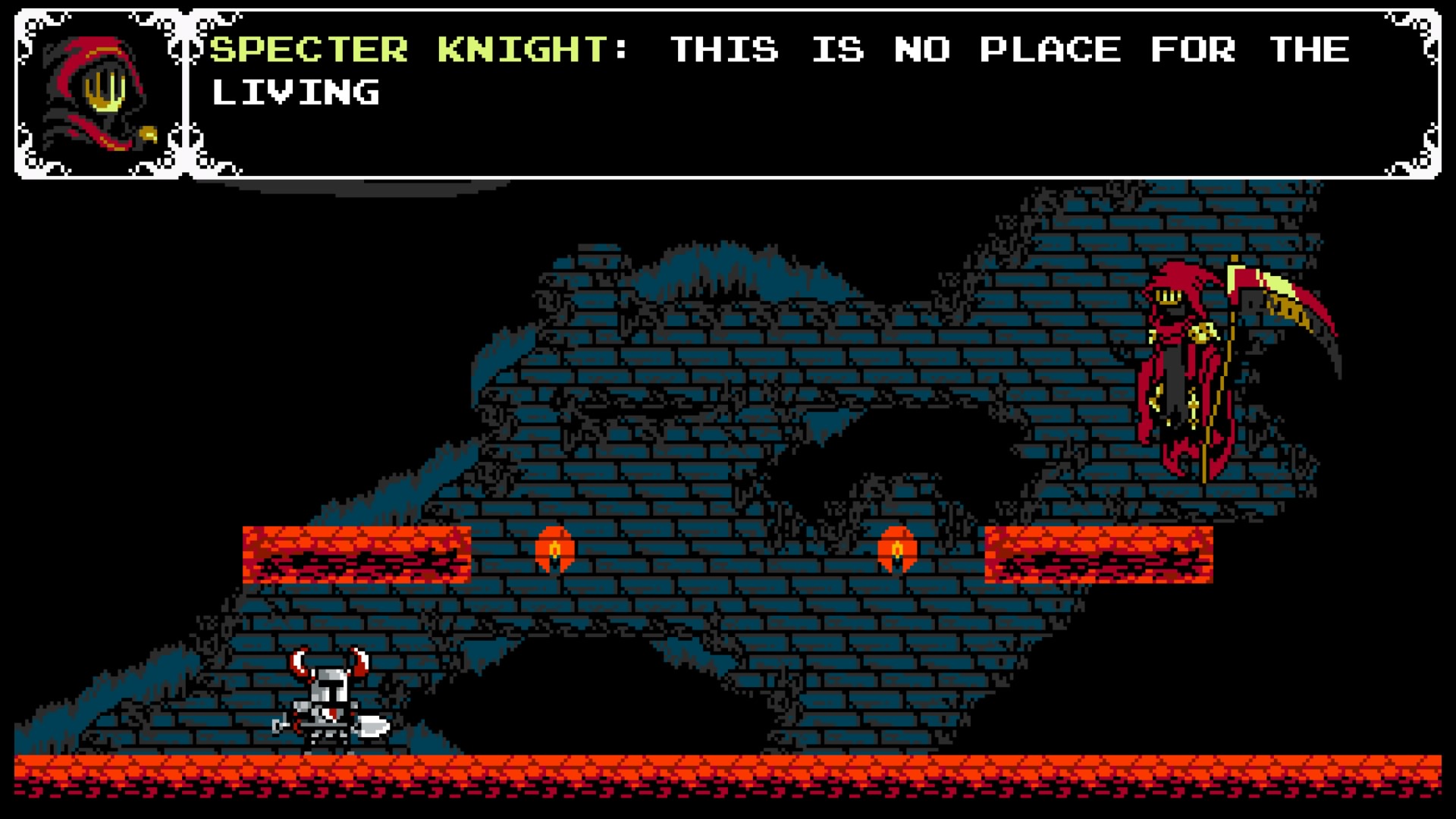 It doesn't try to innovate on the story front--a brave knight wielding a dangerous blue shovel sets off to save his best friend from an evil witch, and the legion of enemy knights wreaking havoc across the land--though twists abound in the final stages that make the game much less typical in that regard. If there's any one true secret to the game's success, its the simple ambition to use its clear influences as a springboard rather than a color-by-numbers template. It's a game that doesn't ignore 20 years of gameplay advancements to make yet another cutesy visual reference. Stages, at any given moment, may play with the pull of gravity, force the player to use the shadows to tell where their next platform lies, or fight a giant boss that requires 3 or 4 different types of platforming skills just to reach the tiny weak point at its top. You have infinite lives, but have to contend with a 'Dark Souls' twist of losing a bunch of hard-earned cash for failing, and getting it back might be a challenge in its own right. Boss fights are weird, wild, eclectic. The sheer variety in their attacks suggest more latter-day 'Mega Man X' than anything the original six ever threw at us. 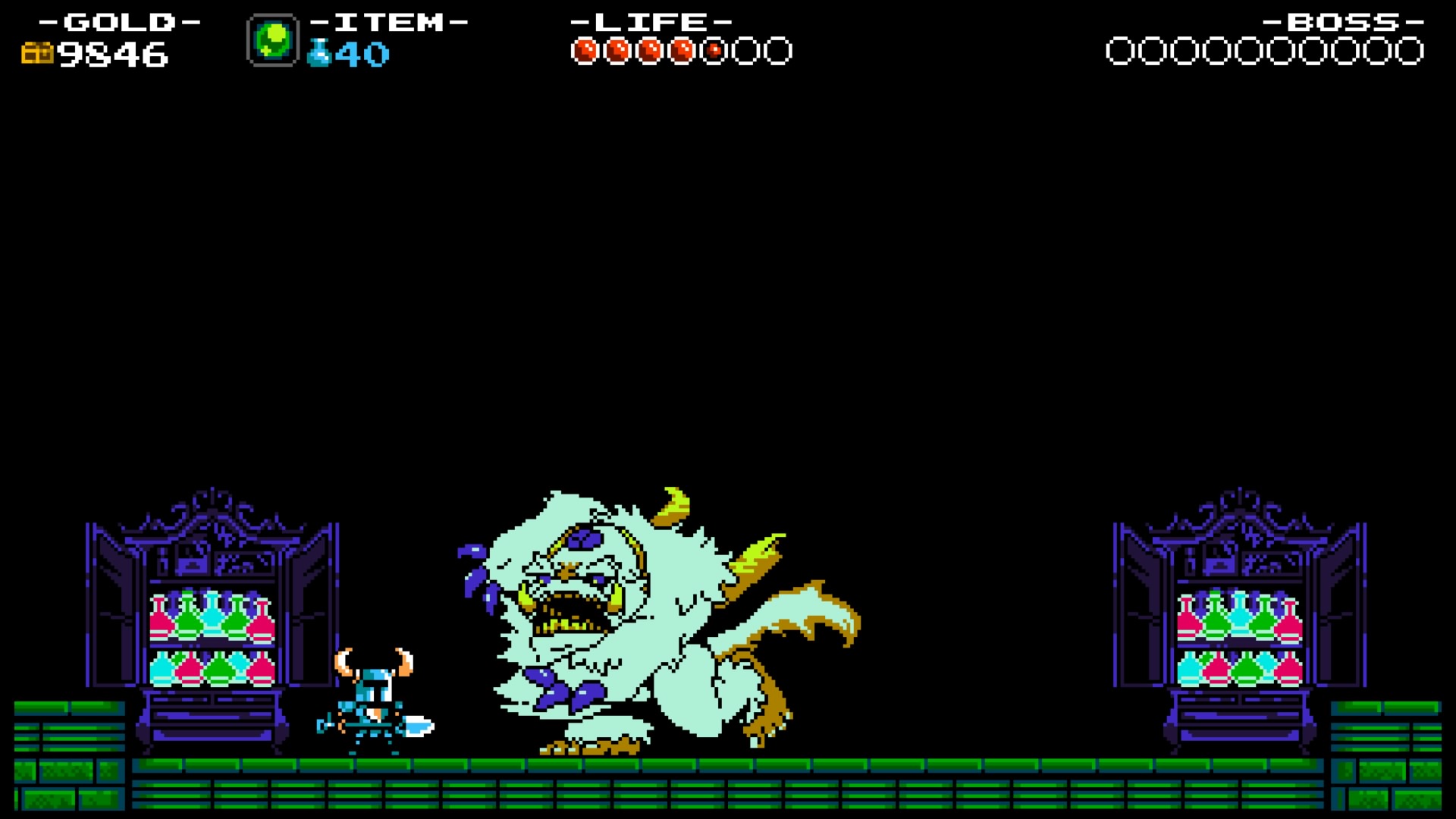 And yet, the game still has more in common with its NES forebears than the 'X' series, which always seemed more interested in pushing the graphical envelope than in developing a personality. Every stage, like the 'Mega Man' games of old, has a theme, be it haunted mansion, psychadelic chemistry lab, frozen shipwreck, and on and on, and the art/enemy design goes absolutely bonkers trying to wring more and more imagination out of every environment. 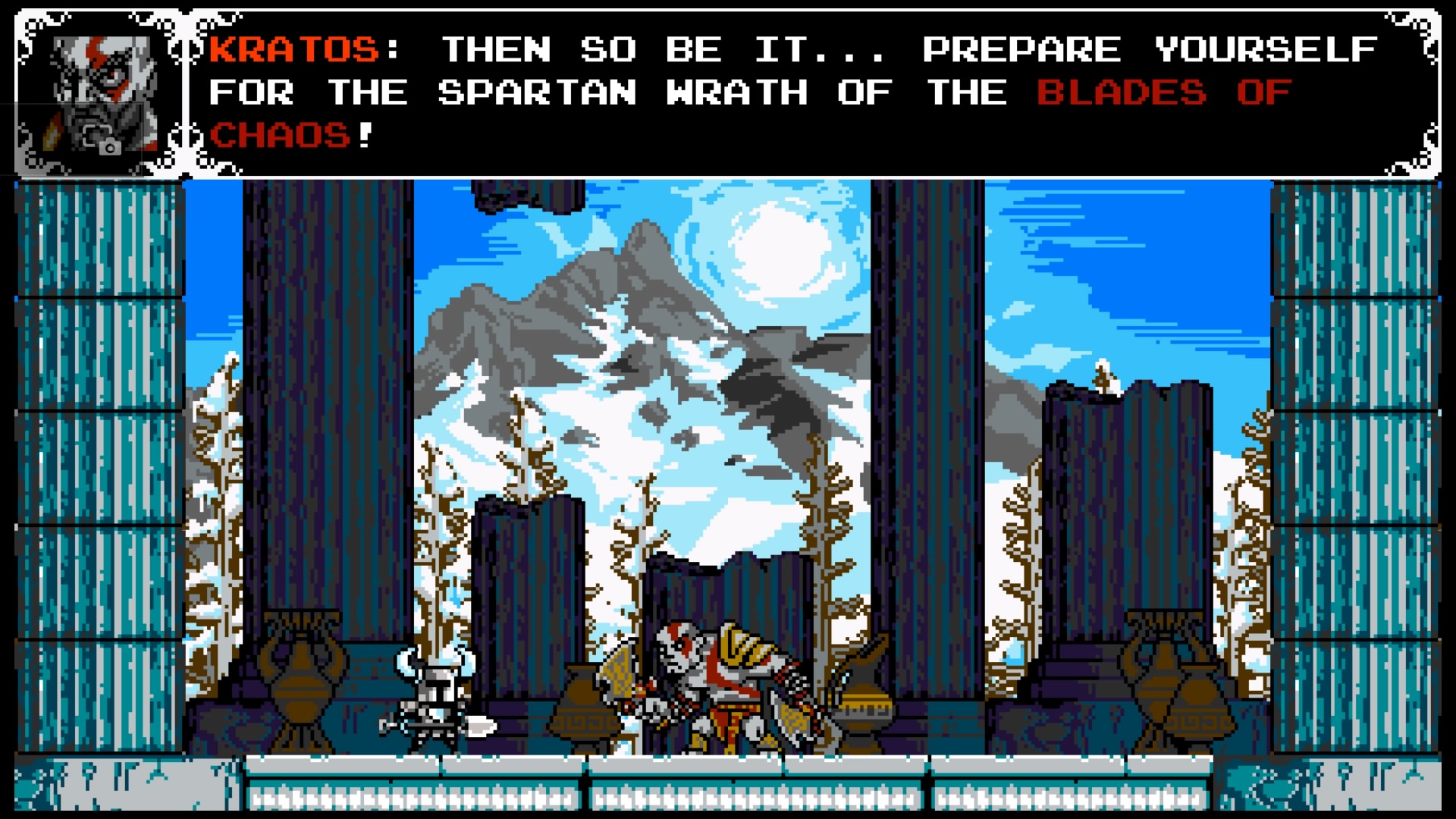 Even despite all this, the game is cut from NES cloth, which is more than just a limited color pallette, and a chiptune soundtrack. It's a way of using design to make every little segment feel like a new game explored using an established set of mechanics, with its own new challenges, and rarely ever repeating itself. It's an ethos where the world changes, to beckon the player forward, not just the enemies, and it is far more rare these days, meaning it has never been more welcome here.

Of course, this being the PS4 port, the new wave of gaming makes another sort of appearance with 'God of War's Kratos as an optional boss. The boss fight itself is fun, the new weaponry obtained from his defeat is powerful, but not overbalanced. You get better range out of the new combo attack, but the pogo stick attack has a completely new feel that does more damage, but makes traversal harder. Kratos doesn't necessarily feel at home here, but he's not unwelcome. The Vita port doesn't bring anything new to the table, and even despite having the touchscreen for it, it doesn't restore the messaging feature that made the WiiU/3DS ports feel a lot more like a community effort. Otherwise, this is much the same game we got on Nintendo's systems, but with a better controller. 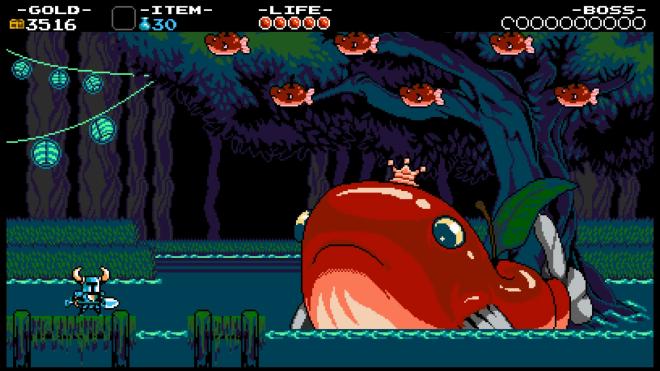 Naturally, one has to judge 'Shovel Knight' on its merits as a 8-bit showcase than any sort of workout for one's HDTV, and with that in mind, its still a colorful, evocative piece of work here that never misses an opportunity to to evince more than just cartoonishness out of this blocky collection of pixels. 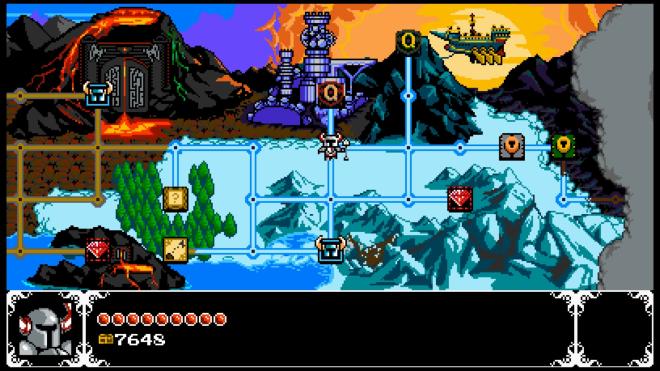 Fun story: The first time I ever heard of Jake "virt" Kaufman was in my Overclocked Remix obsessed days, where I came across what's still probably the greatest piece of fan remix work I've ever heard: A 20 minute prog metal arrangement of the entire 'Super Metroid' soundtrack called Crystal Flash. It's still floating out there on YouTube, last I checked. I only mention this because compared to most fan works that just seek to reinstrumentalize the music willy-nilly, that was a piece of work that so thoroughly understood the tone and timbre of that soundtrack, it felt like a complete inevitability that virt would start actually working in games. So when his name showed up in the credits for 'Shovel Knight', the fact that it's one of the best chiptune soundtracks ever written made a hell of a lot more sense. While the sound design is an appealing collection of 8-bit blips and bloops, the chiptune score is a perfect harmony of catchiness, capturing every ounce of self-awareness, heroism, chivalry, and adrenaline-boosting action that the game needs. This is one of those special scores that those in the know will be humming for years to come. (That soundtrack is available here for a Name Your Price price.) 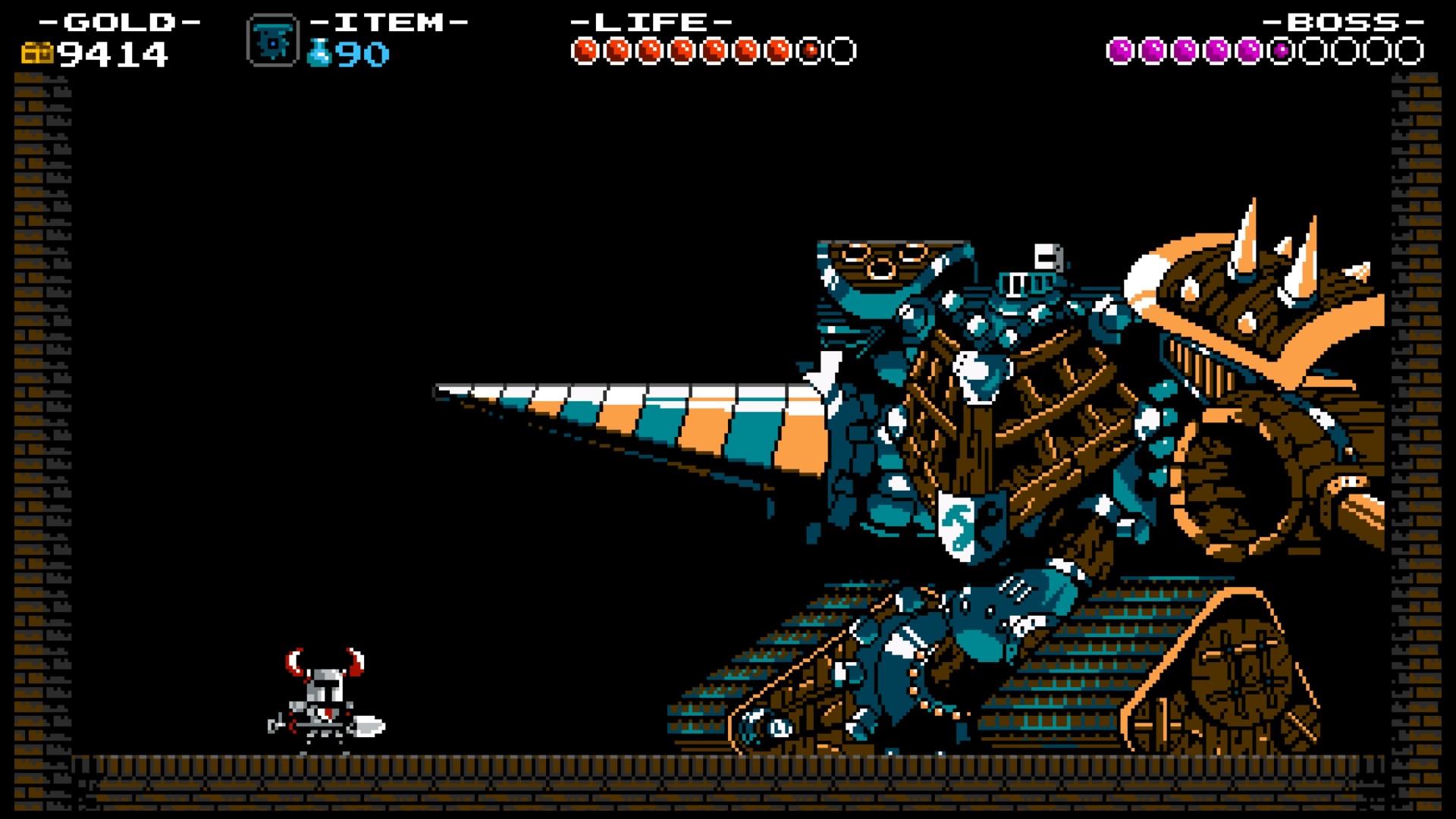 Chances are pretty good you'll beat the game with under half of the game's Trophies unlocked, with the other half involving some serious, deliberate derring-do on behalf of the player you're probably not going to accomplish on your first run. Once beaten the first time, there's a New Game Plus mode to contend with. Yacht Club Games has announced that the Plague Knight DLC is nearing release, so there's definitely more to come. For right now, there's plenty to go back for. 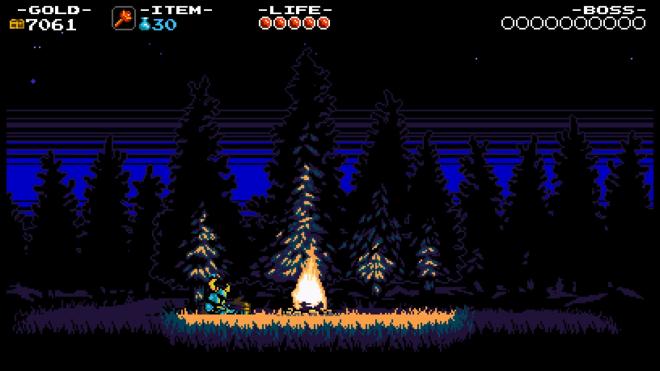 Nostalgia is its own genre of film, TV, and music these days, which isn't necessarily a good or bad thing, with enough creativity employed. 'Shovel Knight', however, is a better kind of nostalgia, the kind that proves there's still plenty of life in a concept rather than trying to remind an audience the concept was good once. 'Shovel Knight' isn't an attempt to remind us of better games; it IS the better game.