'Assassin’s Creed Chronicles: China' is the first in a planned trilogy of 2.5D side-scroller stealth titles. They are significantly shorter and less expensive than the annual big-budget 'Assassin’s Creeds'. In fact, 'China' is free to owners of the short-lived 'Unity' season pass, and $10 for everyone else.

The player character of 'Chronicles: China' is Shao Jun, a Chinese Assassin active in the 16th century. Jun was trained as a concubine in the court of the Ming emperor Zhu Houzhao (also known as the Zhengde Emperor, which is ironic given that Zhu spent most of his short reign as an irresponsible and frivolous womanizer. Zhengde means "the right virtue" in this context). After Zhu died without an heir, the palace descended into chaos. Chinese Assassins rescued Jun and several other concubines, and Jun decided to stay with the Brotherhood. When the Templars took control of the dynasty and purged the Brotherhood, Jun fled west and made contact with the aging Italian Mentor Ezio Auditore. Ezio gave her a mysterious box/macguffin and sent her back to China, where at the beginning of the game she has allowed herself to be captured by the Templars to begin dismantling their leadership. 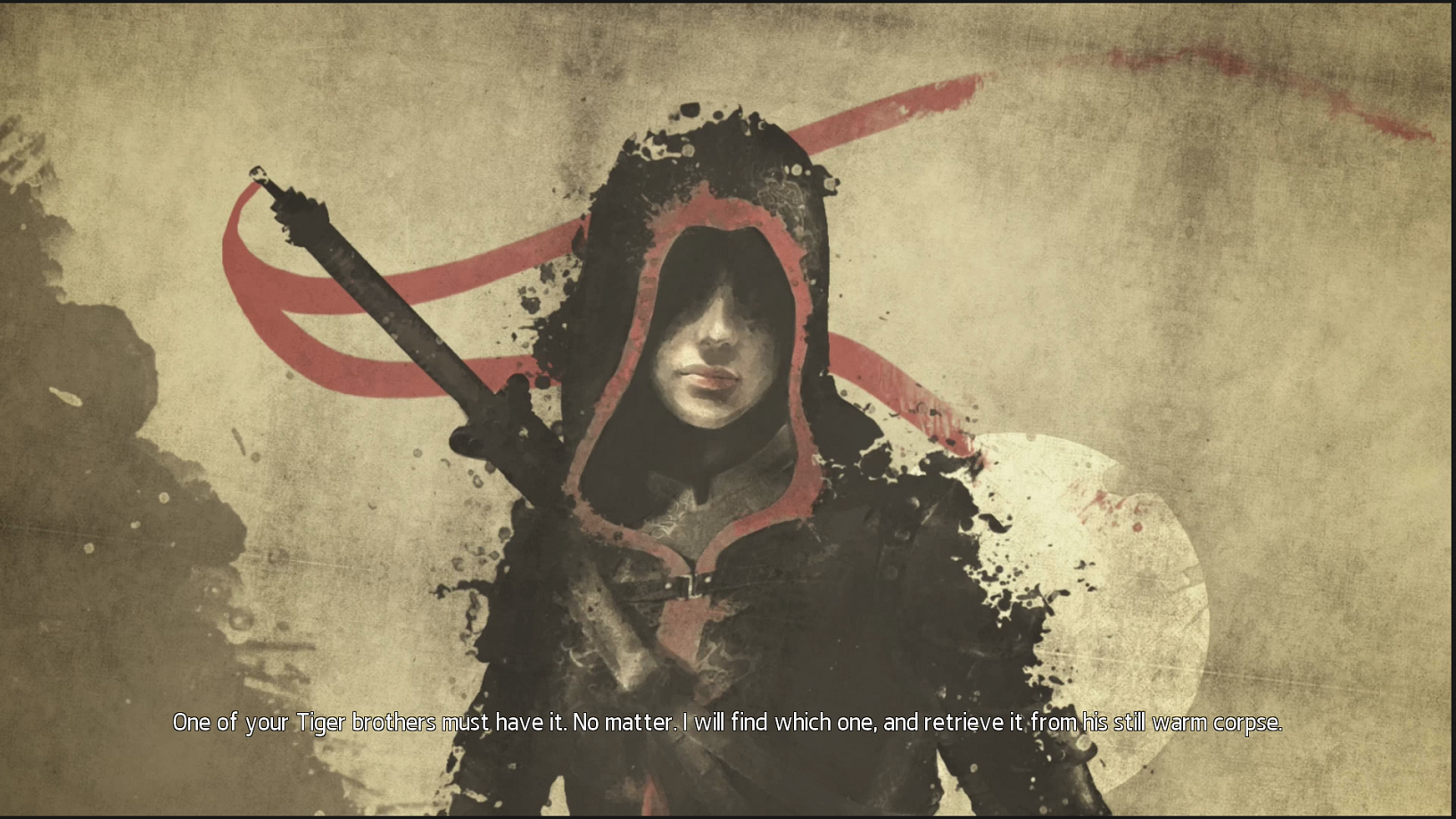 'Chronicles: China' is billed as a 2.5D stealth platformer. This means that most of the gameplay is conducted on a flat 2D plane, with movement horizontally and vertically, but Jun can frequently swap planes by moving into the foreground or background. The level design is almost too good - in many maps, especially the early game, there are easy paths around guards that expose Jun to little danger of being caught. Like 'Splinter Cell: Blacklist', the player’s performance is scored at the end of each level based on three distinct styles - invisible pacifism, invisible murder, and brawling. Being unseen and leaving guards unharmed translates to higher points, and thus more upgrades.

In true Assassin style, Jun has a handful of gadgets and weapons to distract and kill guards from a distance. Guard behavior is predictable, but sometimes they do something unexpected, which is actually a good thing because it made me think on my feet and deviate from the puzzle-like thread of hiding places I would use to slip through each level. Jun becomes more powerful as the game goes on, even supernatural, and the guards become stronger in turn. Still, I recommend that players with any stealth experience at all crank the difficulty up on the first run. 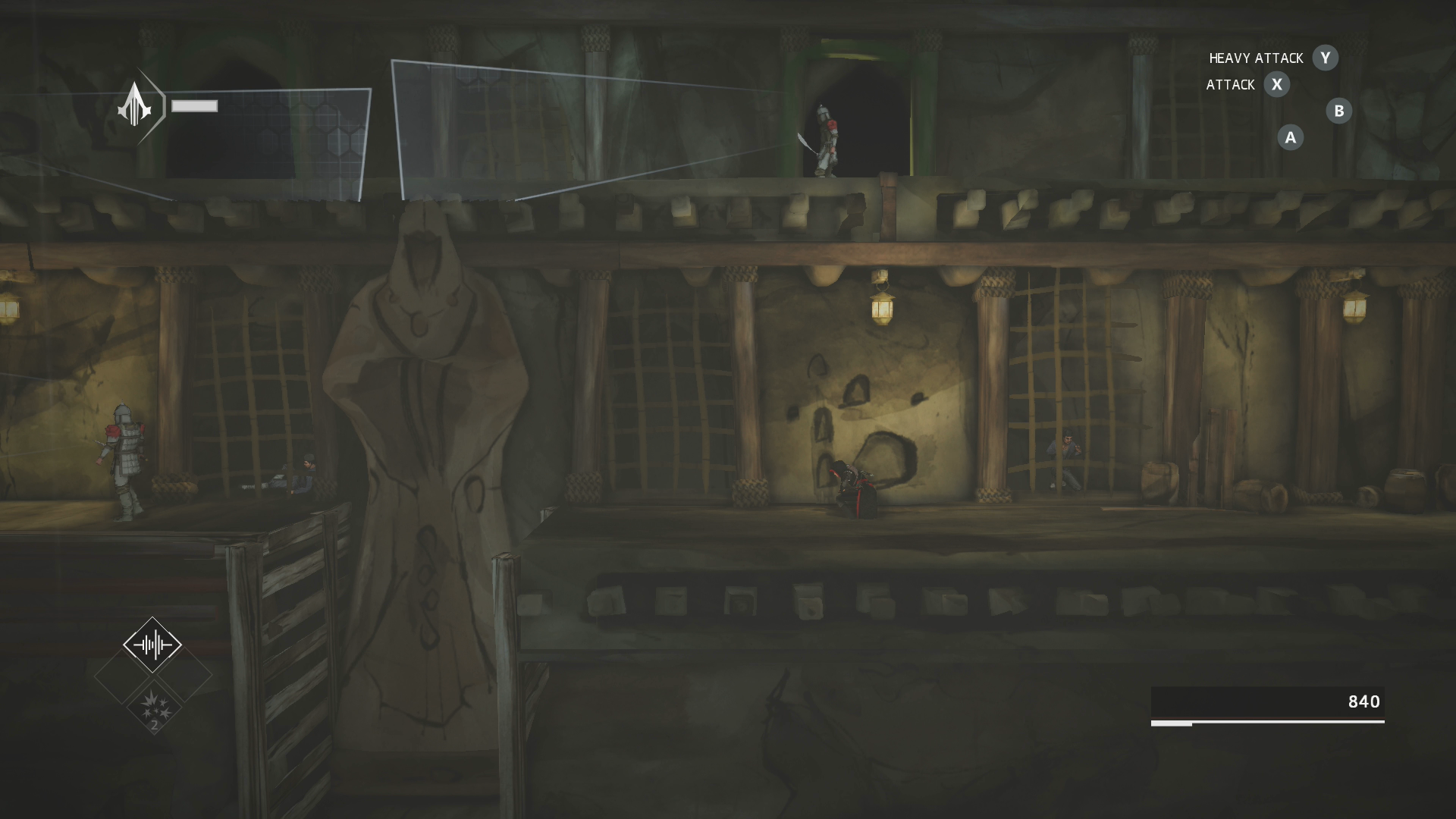 The stealth is only half of the picture. Platforming has a big role, and just like the sneaking, it is a very good system with only a few mild problems. Jun is lighter and much more athletic than typical Assassins. Her strengths lie not in fighting off twenty bad guys at a time, but in jumping and climbing around the many ledges, walls, and platforms to be found in each level. She is quick and responsive, and my only real complaint about the controls is that she will sometimes inadvertently slip around the edge of a platforming when hanging from it - the classic "I zigged when I should have zagged" problem. The combat is fine, but the game design makes it clear that it’s not the best way through the levels - when fighting more than two enemies at a time, Jun is quickly overwhelmed. 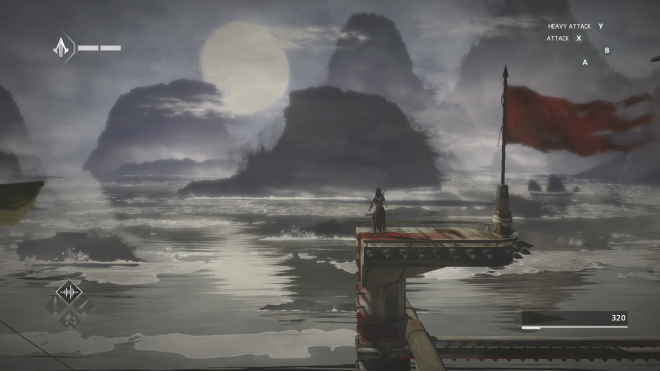 'Chronicles: China' doesn’t have the best in textures or modeling, but it does have beautiful art design. Much of the environment looks like an ancient Chinese watercolor painting. Trees, stone, water, even blood is rendered in a heavily stylized paintbrush format. To add further to the lack of difficulty is the presence of a red streak highlighting anything remotely interactive, cutting down on the exploration. The game runs smoothly and never stutters, and the load times are quick. 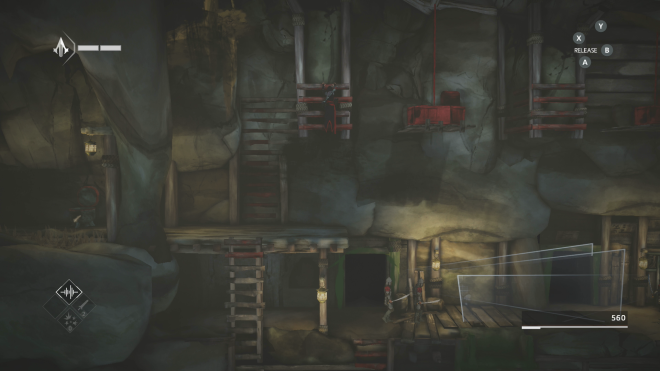 To further add to the period authenticity, the soundtrack is made up of traditional mainland Chinese music. Expect lots of meditative dizi and plucky percussion, along with heavier drum sequences during chases and boss fights. Cutscenes have voice acting in English, but all of the guards speak in Mandarin with subtitles. Most of the voice acting is solid, as are the sound effects.

There are three difficulty levels, the hardest of which must be unlocked by completing the game on a lower one. The game is short enough so that replays are palatable, especially when broken down into individual memories. The points and upgrading system lured me back in for multiple attempts, as did the achievement for completing every level perfectly (a work in progress). 'Assassin’s Creed Chronicles: China' is a mixture of classic 'Assassin’s Creed' gameplay, the stealthy 2D success of 'Mark of the Ninja', and sharp art design. It’s rather short, but also rather cheap, and has more replayability than most games in this category. It’s probably the most fun I've had playing an Assassin’s Creed since 'Black Flag'.