The Game Itself
4 Stars
The Video: Sizing Up the Picture
4.5 Stars
The Audio: Rating the Sound
4.5 Stars
Replay Factor
4 Stars
Bottom Line
Recommended

This year’s entry in the 'Assassin's Creed' franchise is 'Syndicate', which takes players to Victorian London in the ongoing fight against the Templars for the freedom of humanity. Instead of one Assassin we get two - fraternal twins Evie and Jacob Frye, born into an Assassin family and already trained by the time the game begins. Evie is presented as the stealthier of the two, while Jacob is more of a brawler. It is a wholly single-player experience.

Instead of the extended and often slow prologue I’ve come to expect from 'Assassin's Creed', 'Syndicate' has only a brief tutorial before the twins decide to invade the Templar stronghold of London on their own. The Brotherhood is weak and can offer only limited support, and so the pair must develop a network of spies, informants, and operatives while simultaneously building a street army in the form of a huge gang. Jacob and Evie are ready to go when the game starts - they have their robes, hidden blades, and other gadgets all kitted out. Of course, much of the game’s other content is meted out piecemeal as the story progresses, but on the whole it comes faster than in previous games, allowing me to experience London more as a master Assassin than as an initiate. 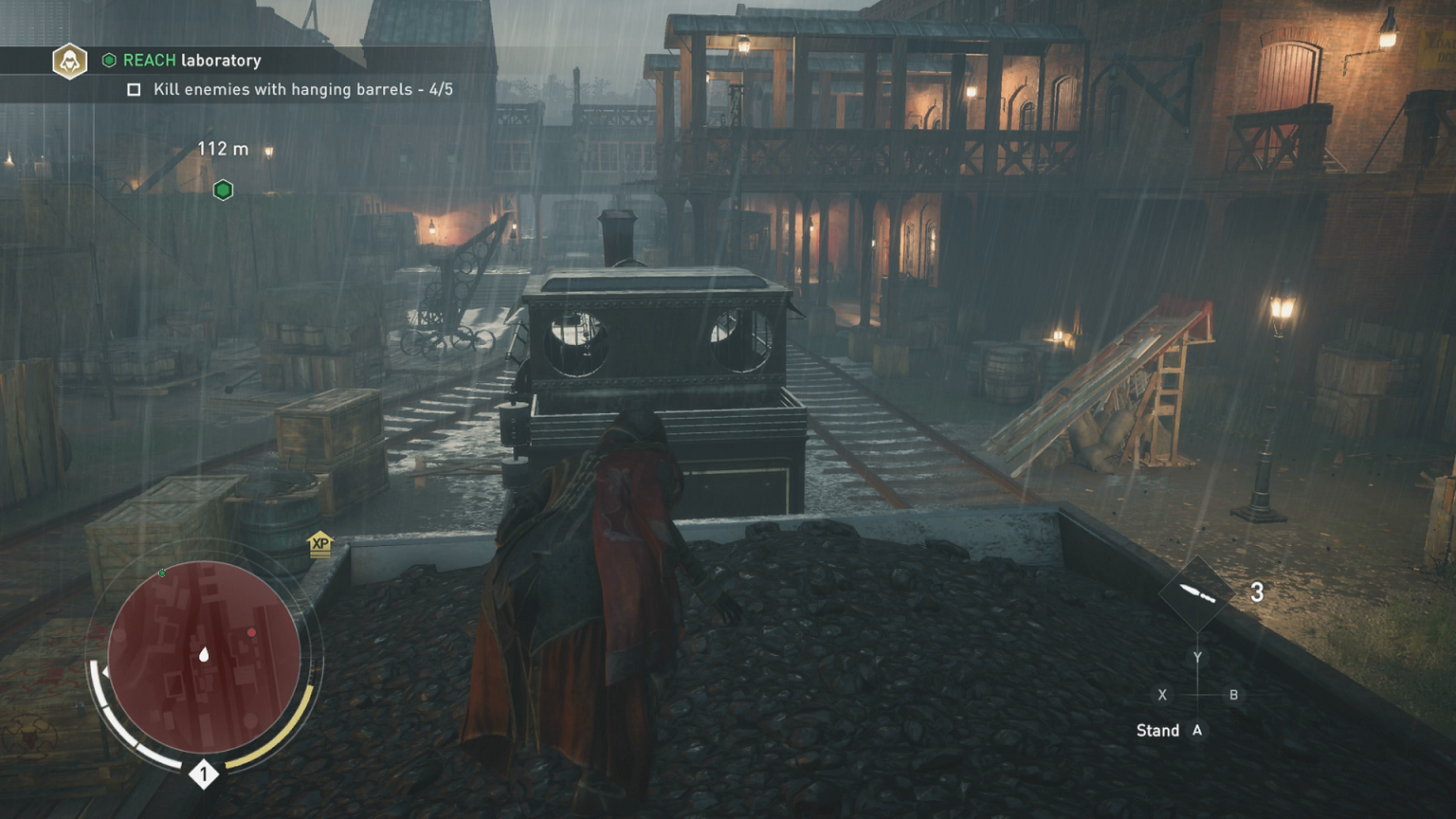 The parkour elements are as strong as ever. Freerunning is fast and fluid whether moving up or down, with serious blunders being a relative rarity. It is difficult to spoil one of the chase missions with a single mistake, for instance, a problem that plagued earlier games. 'Syndicate' also has a rope launcher, an evolution of the rope dart and a primitive analogue to Batman’s famous grapnel gun. It permits much faster climbing and the ability to move from building to building without touching the ground, which is really nice for avoiding guards.

Besides the rope launcher and some difference in the open world content, this is the same 'Assassin's Creed' that we have known and loved for years. Each release is more of an incremental upgrade than a quantum leap forward - not that this is a bad thing, as the formula usually works. Where the series has made strides is its stealth system. The eagle vision through walls, snapping to corners, throwing weapons from cover, visual representation of enemy perception, and more have finally come together into a system where stealth is a viable option for many missions without being too frustrating or too easy.

Ubisoft has made a very likeable protagonist with Evie Frye. She is level-headed and mature, though not above fighting with her brother at every opportunity (this is natural sibling behavior). Jacob on the other hand is a hotheaded brawler with little charm, often more interested in violence and revenge than in the big picture of helping people. Assassins don’t have to be Boy Scouts, but they should have at least enough idealism to edge out their thuggery. The story is well-written and entertaining, at least up to the ending, which fizzles out. I think Ubisoft made a good decision in toning down the present-day narrative and keeping the focus on the historical Assassins and their open world playgrounds.

I like the variety in the dual protagonist system. The twins have many of the same skills, but they can be purchased in a different order to complement their preferences. My Jacob first put skills into health and counter strikes, useful for missions featuring lots of fisticuffs. I tend to explore and sneak around more with Evie, so she gets points in looting and stealth kills. However, both Assassins are adept at fighting and sneaking, so they can really be played however you like. There is a large customization system for equipment, weapons, and outfits, and they tend to give stat buffs and options for craftable upgrades. There are microtransactions galore, but hidden within the e-store interface are a few little gifts and freebies for those who have played 'Assassin's Creed' before. Call me nostalgic, but I happen to enjoy dressing up Evie and Jacob as Shao Jun and Ezio. 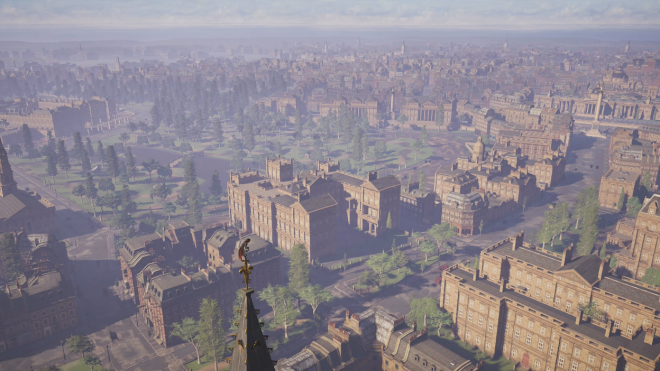 Despite being covered in the muck and mire of 1860s London, 'Syndicate' looks delightful. The framerate in the AnvilNext 2.0 engine has been improved, probably by reducing the number of assets on the screen at any given time. There are some lingering bugs and clipping issues but nothing disastrous. New animations have been added and combat looks fresh, even if the abilities themselves are familiar. The unconventional weapons in particular are nice, like the cane sword. 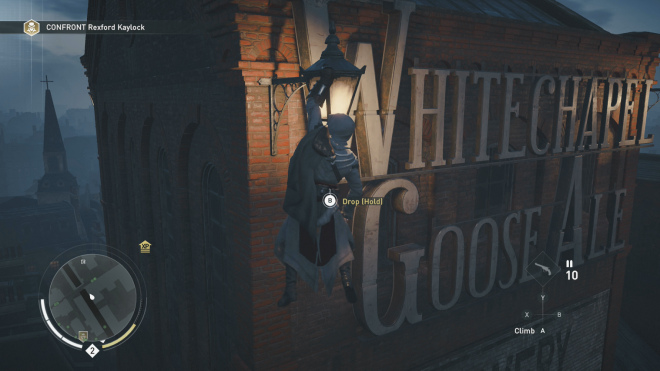 The string-heavy score serves the setting well. London sounds alive, from the ubiquitous hoofbeats and carriage clacking to the cheeky slang of the urchins. The voice acting is superb, particularly the Fryes.

Jacob’s street gang army is a continuation of elements from 'Rogue' and 'Brotherhood'. Individual gangbangers can be recruited on an ad-hoc basis to distract thugs and cops and generally cause havoc, allowing the Fryes freedom of motion in their missions. Collected money and crafting materials can be used for expensive upgrades to the gang’s infrastructure, resulting in upgrades to associated merchants, street urchins, and other support staff sprinkled around the city. Much of the side content is concerned with the dissolution of smaller Templar leaders and their organization, to make way for the growing Brotherhood.

Also included within 'Syndicate' is a game-within-a-game, a completely discrete adventure called 'The War at Home'. It is hidden within London and presented as the memory of a Frye descendant operating during World War I. It’s the sort of thing that would normally be sliced off and sold as DLC or pre-order incentives, so I’m glad to see it added here as a kind of Easter egg. 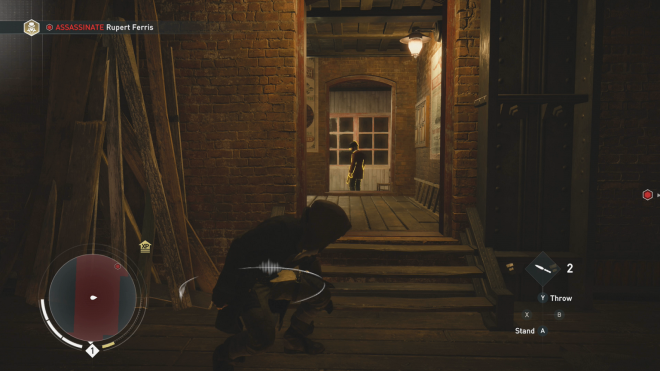 Ubisoft took considerable flak from last year’s release of 'Assassin's Creed: Unity', which had some good ideas but suffered from a collection of design and testing problems. To their credit, they appear to have taken it as a learning experience, as 'Syndicate' emerges as one of the strongest 'Assassin's Creeds' in recent memory.