Ear Force XO Seven Pro reviewed primarily on the Xbox One, with some use on the PS4 and various other devices.

When it comes to jacking into the Xbox One controller, the Ear Force XO Seven Pro is Turtle Beach's top of the line for passive stereo designs. (And identical in design to the more expensive Turtle Beach Call of Duty Advanced Warfare Ear Force Sentinel Prestige.) Twin 50mm drivers in an around-the-ear, synthetic leather, sound-isolating design push the game sound and chat audio, while a detachable noise-cancelling boom mic serves as pick-up. The XO Seven Pro has a second mic option housed in its mobile breakaway cable, and the entire package exudes heavy duty plastics, and in this case, MLG branding.

Bundled with the Ear Force XO Seven Pro is the Ear Force Headset Audio Controller Plus, which is Turtle Beach's top of the line answer to the problem of bridging the 3.5mm headset connection to a Xbox One controller. By combining the headset and bundled adapter, features like variable Mic Monitoring, Superhuman Hearing, and Audio & Mic presets, become an accessible part of gaming on the Xbox One. 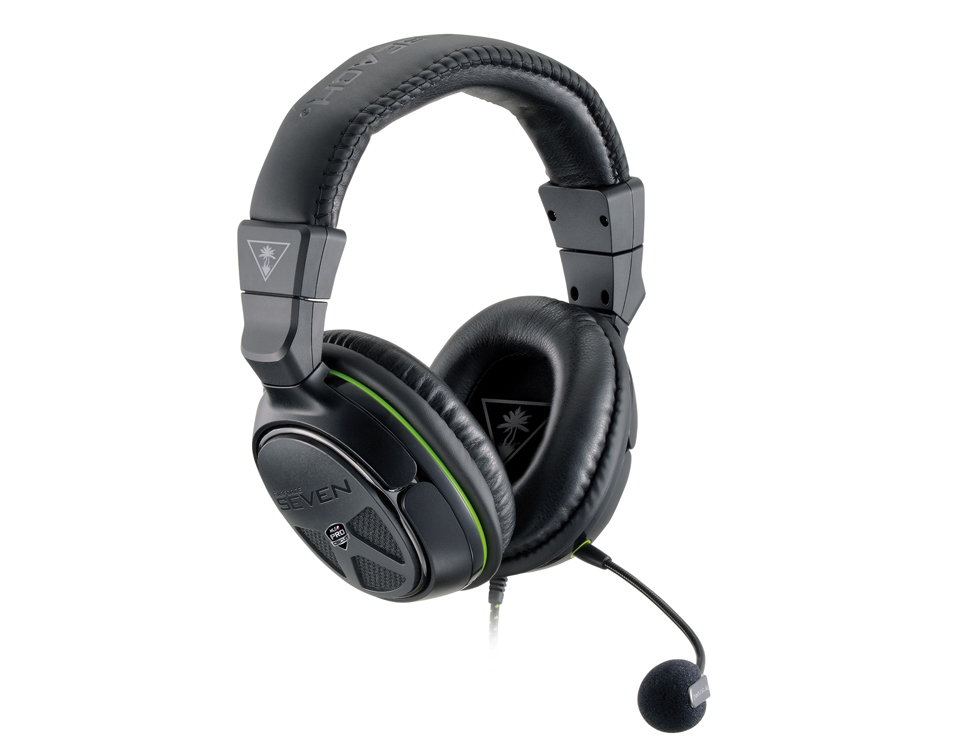 While I value and enjoy the individual features of the XO Seven Pro, there's something about the whole package that kept throwing me off. Almost the very first thing I did with it was extract it out of the box, check that both cables worked, and tossed it into a backpack. I had about a week of hotel dwelling and working to do on the go, and in spite of its green ascents, I wanted to see how the XO Seven handled it all. Despite putting the headset in a full bag and cramming it under an airline seat, I never felt concerned, and indeed, the XO Seven Pro did around the clock travel/hotel duty just fine.

Pairing the headset with the Ear Force Headset Audio Controller Plus, and the headset continued to work like a champ. It almost seems a shame to ground it to my office, as though the damn thing can't wait to get crammed into another overwrought travel situation.

Eventually, after several days of use with the Xbox One, I figured out what it is about the XO Seven Pro that I dislike. Somewhere between what the headset can do, and how it feels, it's lost me. The mostly plastic XO Seven Pro looks like a mix between Delta Force knee pads and old-school Tonka toys. The headband, earpads, and nylon cables are all entirely workers, with a style and feel that continues to say "heavy duty" long after I thought it would have worn off. It's this kind of intensity that's put me off.

Even when I game sunset to sunrise, I keep it fun, or at worst, tired fun. The XO Seven Pro has a whole other gear, the kind of which is welcome in the world of MLG, where high-pressure, hot, sweaty, and loud is the typical environment. I game at 72 degrees, and the A/C is whisper quiet. Furthermore, I'm not going to throw my headset at the wall after a tough loss. 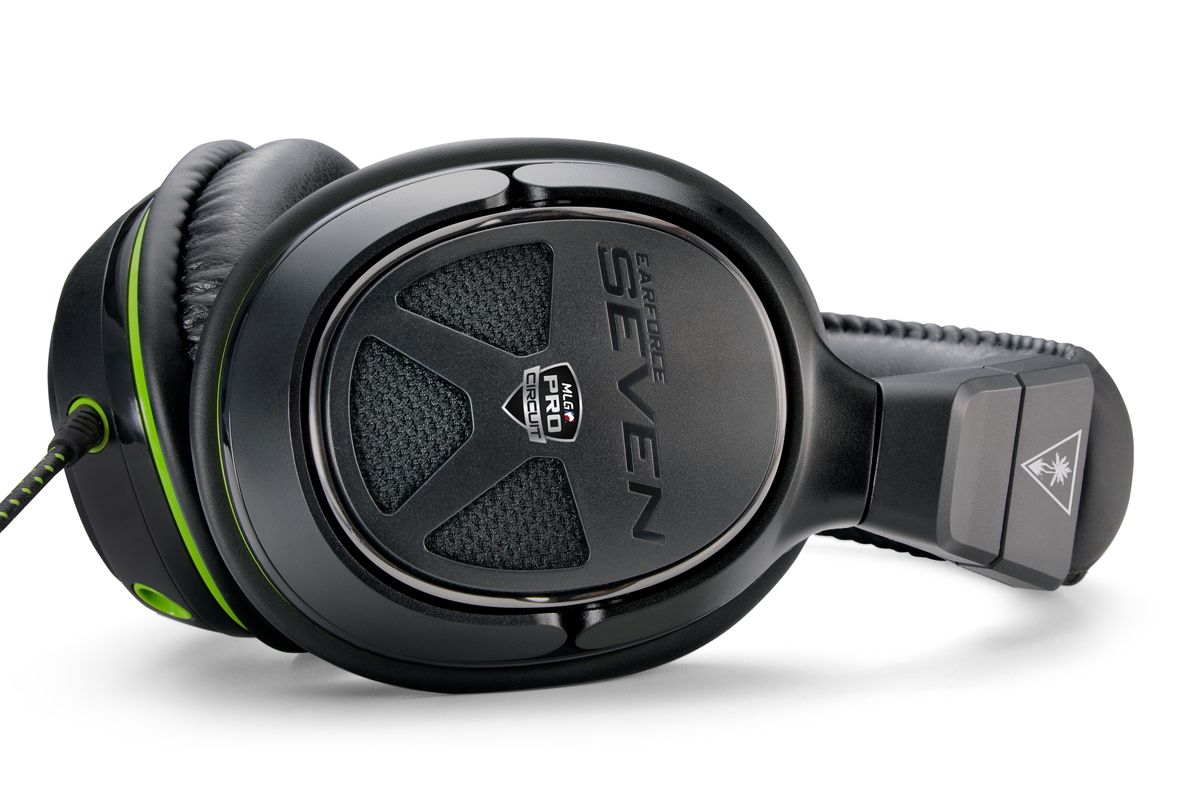 The Xbox One & Audio Gremlins

By now, it must be as obvious as ever that the Microsoft plan that called for users to buy a Xbox One Chat Adapter for headset use (beyond the bundled one) did not make for the best user experience. A day late and a dollar short as it goes. When the policy that lead to the late-arriving Chat Adapters began to change, I began looking forward to seeing what the various audio companies would come up with. The results overall haven't been that impressive, with several third party adapters really just mimicking Microsoft's own design.

Fortunately, with the Ear Force Headset Audio Controller Plus, being cabled to the Xbox One controller finally doesn't feel like a compromise. This adapter seems to make the most out the wireless controller's design, with the performance, the extra signature Turtle Beach features, and the tactile feel and layout of the adapter all combining to offer something worth considering. The simplicity means jacking into the controller, without requiring batteries or other connections, and having the entire control set right near where the hands are anyway. Plus, no need to mess with the Xbox One's settings ever. 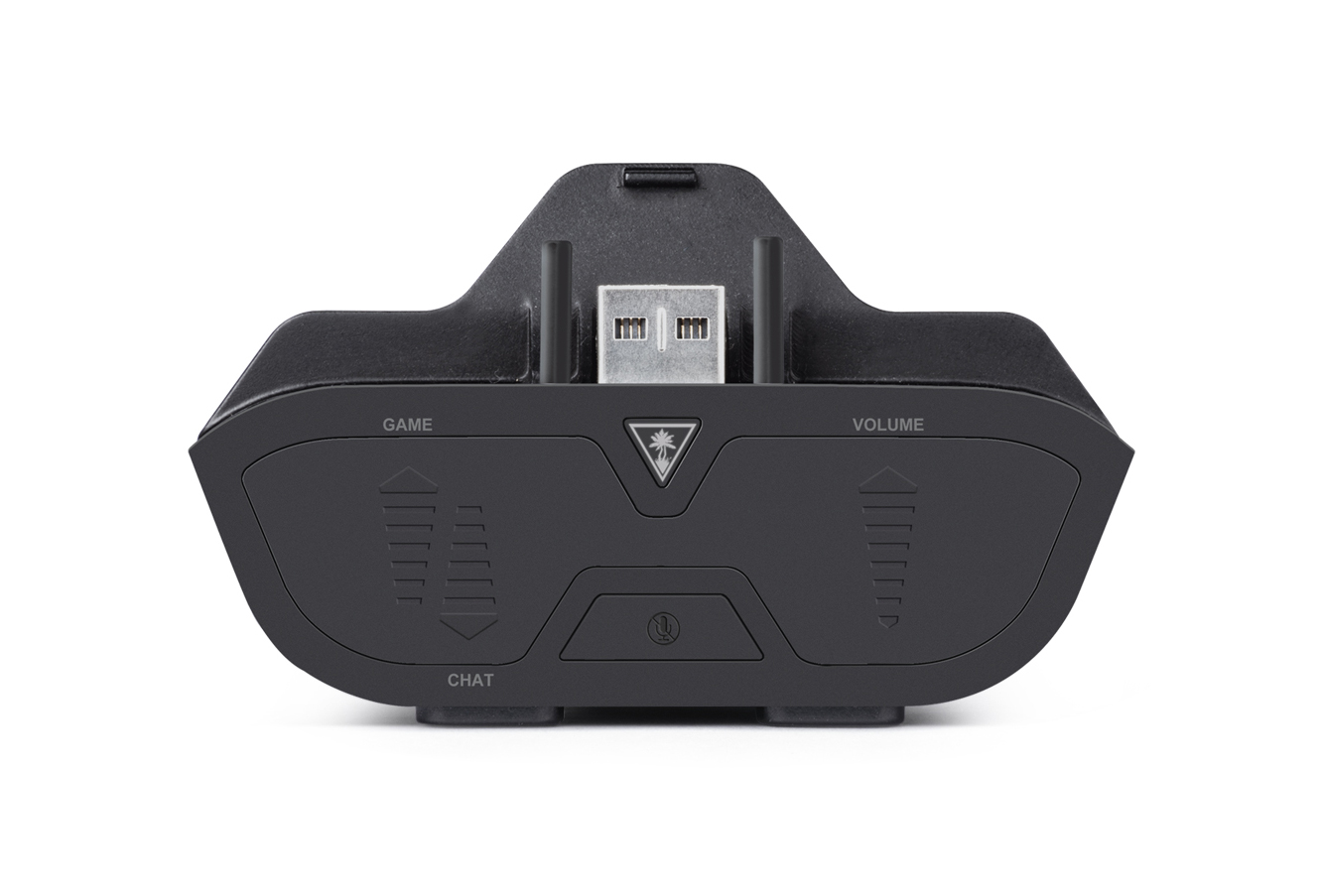 Of course, the output is stereo, but this is a stereo design meant for gaming, for hearing and locating sounds in a 360 field. And that's before engaging the very sensitive Superhuman Hearing mode.

There's the typical Game/Chat balance volume buttons on the left, and volume up/down on the right. Bottom middle is the mic mute, which will pulse when muted. Holding the mic mute button will cycle the mic monitor from off to low and then to high. (This three step mic monitor is one feature I know to be frequently requested, and I like it as well.) The top middle button engages Superhuman Hearing mode, and features a tiny Turtle Beach logo which lights up when the mode is on. Superhuman Hearing makes for a dramatically different experience, and it can really focus the soundstage in a game like 'Call of Duty Advanced Warfare.' For me, it's fun to turn on and off, and it works well enough to tempt addiction.

The two buttons on the bottom outside that flank the audio jack serve as the audio preset buttons. The left button cycles Game Audio presets (Natural Sound, Bass Boost, Bass Treble Boost, and Voice Enhancer,) while the right button cycles microphone presets (Quiet Room, Normal Room, and Loud Room). These presets offer a simple and useful set of adjustments. Unfortunately, the way the adapter indicates the selected preset is through a series of beeps after being pressed. This can be a bit basic without a nearby manual or without having had the presets memorized.

One thing to know is that while the Ear Force Headset Audio Controller Plus is bundled with the Ear Force XO Seven Pro, it is also available to buy on its own direct from Turtle Beach, which makes sense since it's designed to be used with Turtle Beach headsets. 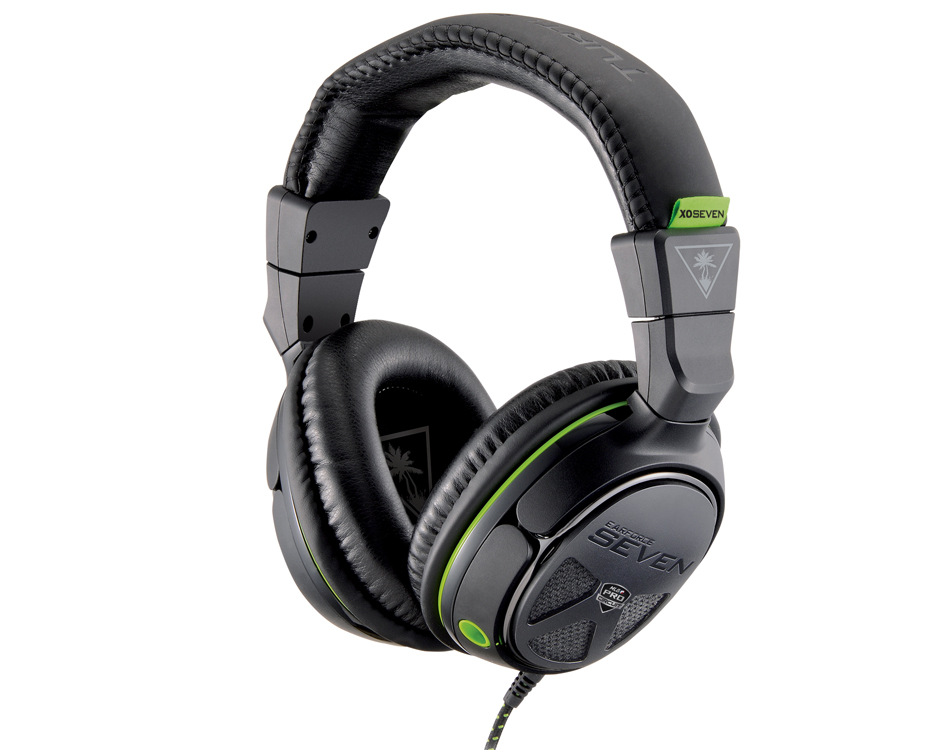 XO Seven Pro is fully featured. Beyond the powerful drivers, which are bass heavy, but in a game appropriate way, the earcups are meant to really isolate the user's ears with a generous memory foam and pleather design. Sound is clear, and when used on the Xbox One, the loudest it gets is plenty loud for me. Pair the headset with a headphone amp, and the danger zone, (for the ears) is not far off at all. The headset can become speaker like, though I wouldn't specifically recommend trying to use it that way.

The headband, with its heavy duty stitched together padding, never hurts. The earcups swivel and can lay flat. There are a few spots in the seemingly simple design that highlight its greater purpose, such as the pads that catch the earcups and the four square brackets which connect it all together that appear unlikely to crack under use for a long time. The fixed cord leads to the large PS2 port that meets with either of the two breakaway cables. Together, these spots seem to address the likely fail points for a headset.

The detachable, articulating boom mic has a wind screen that is kept snug in place with a nice Turtle Beach logo. Chat performance is great, though I suspect that the controller's wireless signal is still something to cause worry. The boom mic itself is probably the best I've seen from Turtle Beach, which is saying a lot. Personally, I prefer invisible mics, but I completely understand the usefulness and reliability of the boom mic design. 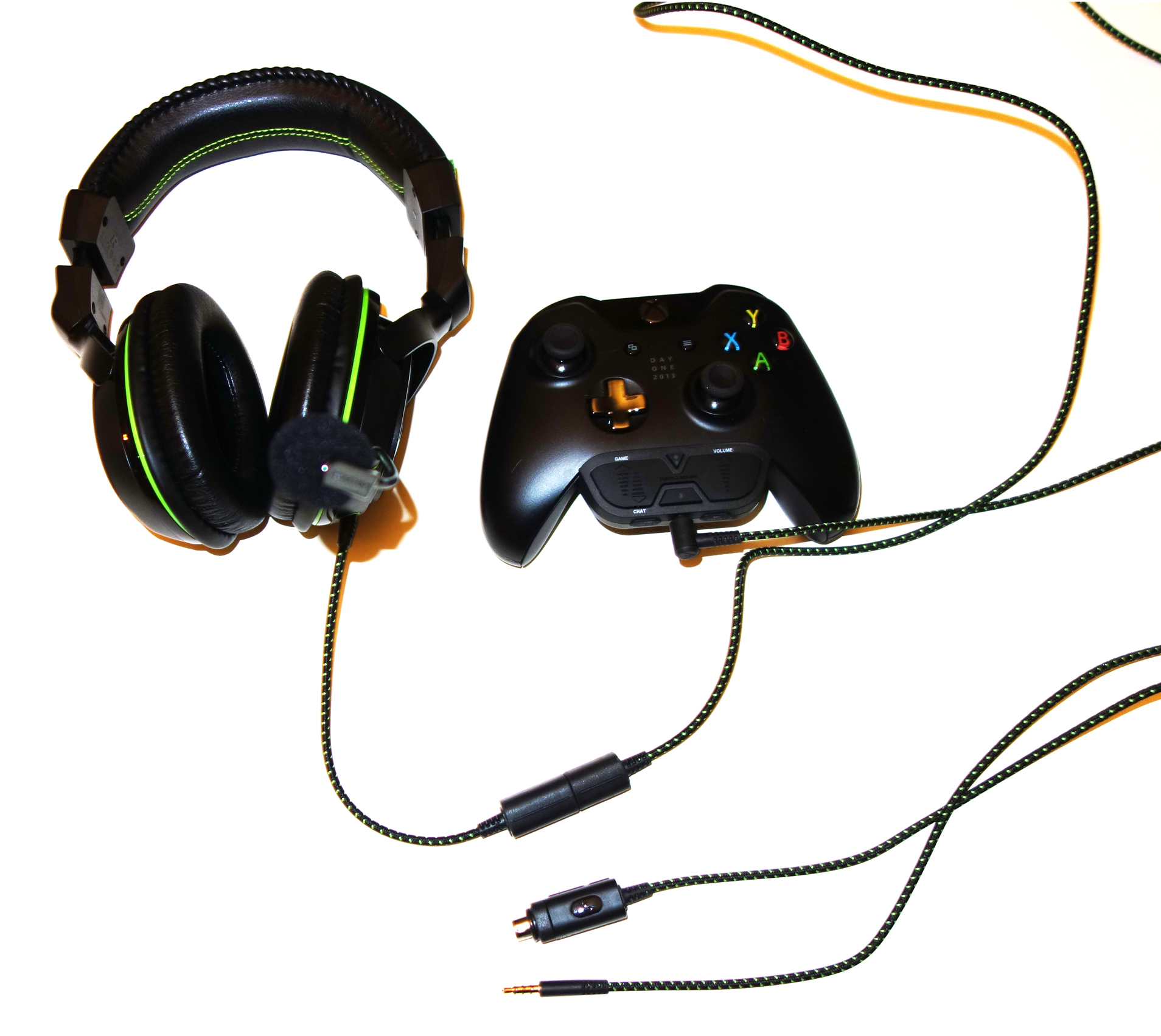 The natural state of the XO Seven Pro is to be connected to the Xbox One, and that means using the headset breakaway cable (along with the detachable mic), which terminates in a right angle 3.5mm connection. This exact same set-up will work with a mobile device, but Turtle Beach has wisely elected to include something better suited to walking around. That would be the Mobile Adapter Cable with In-Line Mic. This dangle mic and button combo works perfectly with a phone (and even works on the Xbox One). As the name suggests, a breakaway cable is meant to relieve stress on higher up the cable at the ear, and I assume that the PS2 port that is being used for the breakaway will hold up better over time than a 3.5mm jack would. Still, I'm left liking the two cable design, but have found the junction a lot larger than I would like. (Bigger than a AA battery.) Both cables are can be purchase separately from Turtle Beach. 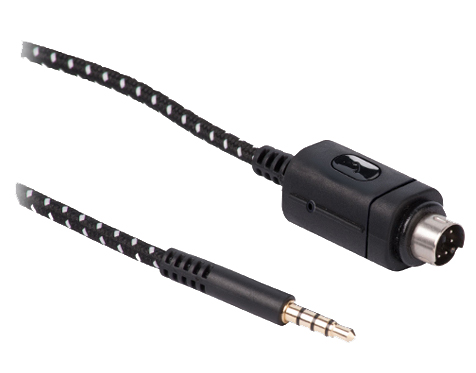 Even without the second cable, I'm glad that the XO Seven Pro can be used easily with almost anything with a 3.5mm port. That's a feature that many expensive headsets manage to overlook.

It almost goes without saying, but the XO Seven Pro performs well on the PS4. It's a completely passive experience as all the Pro features added by the Ear Force Headset Audio Controller Plus (SuperHuman Hearing, Mic Monitoring, presets, etc.) aren't there, but the normal PS4 3.5mm connected features get along just fine with the XO Seven Pro. (Don't forget to set the mic sensitivity way down in the PS4 settings.)

The XO Seven Pro can handle music usage, and sound pleasant, and deep while still being better than many Bass-heavy designs. That said, these headsets are much more FPS than audiophile. 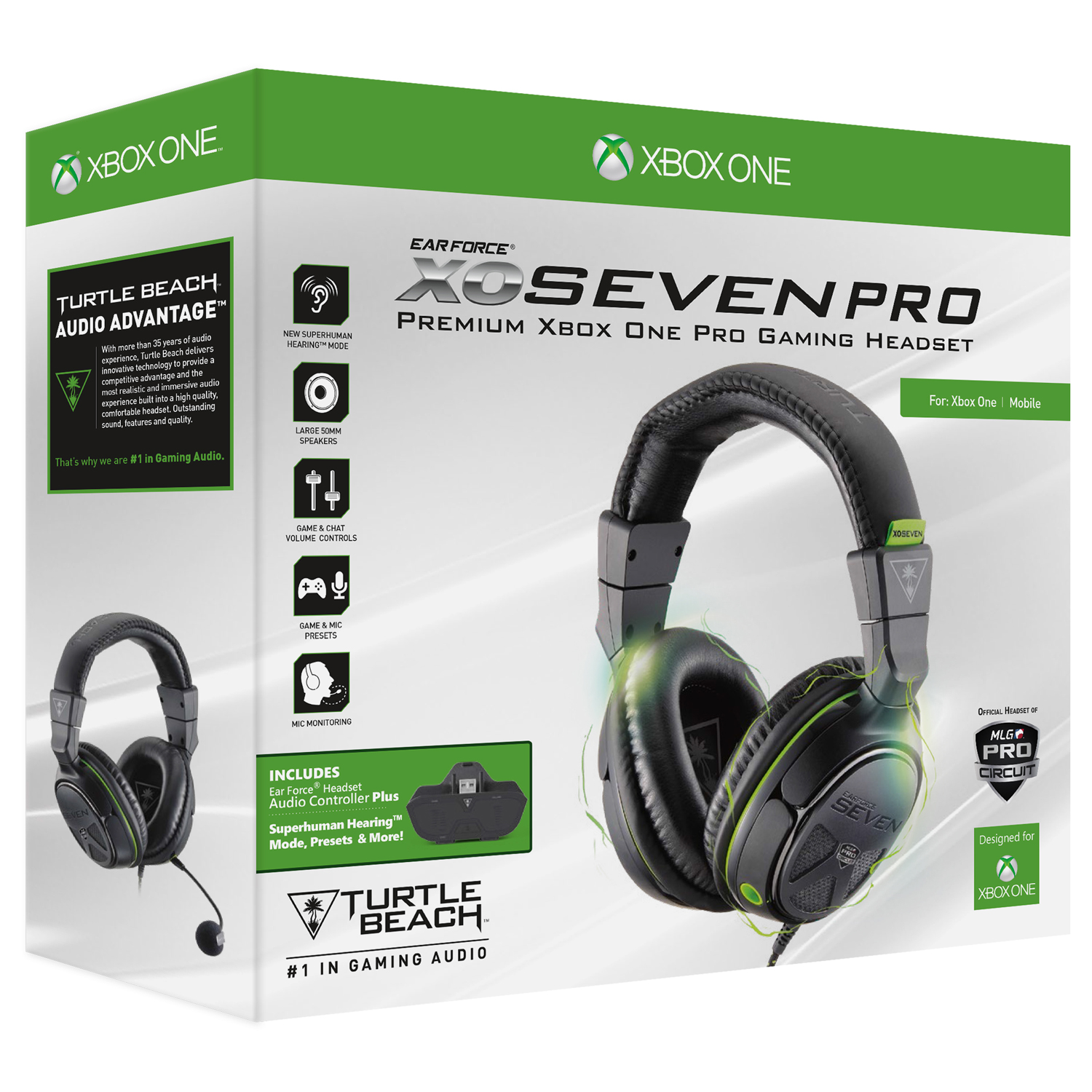 The Ear Force XO Seven Pro, which comes bundled with the excellent Ear Force Headset Audio Controller Plus is the standard bearer for stereo passive designs that Turtle Beach wanted when the Xbox One debuted. It does its job well on the Xbox One and can even handle being used with other devices. It's easy to use, but still manages a robust and accessible feature set. Ultimately, I found it to be too heavy duty for me, but that shouldn't stop any users looking for intensive online gaming or even stereo privacy from taking the plunge.