The Game Itself
3.5 Stars
The Video: Sizing Up the Picture
3 Stars
The Audio: Rating the Sound
4 Stars
Replay Factor
2 Stars
Bottom Line
For Fans Only

Over the last few years, old-school dungeon crawlers have had a resurgence in popularity. These typically difficult games have found a new home on handheld systems, where it's easy to pick up, play for a short time and make a little progress, then put down again.

In the midst of this popularity boost, Experience Inc. made its name in the West when Nippon Ichi released the Vita title 'Demon Gaze', a relatively beginner friendly dungeon crawler that is also quite good. Nippon Ichi is now trying to capitalize on the game and genre's niche success by releasing one of Experience's earlier titles, 'Operation Abyss: New Tokyo Legacy.'

'Operation Abyss' does not start slow—you, as in a generic character, wake up in a strange place, surrounded by corpses. A young man quickly tries to rescue you, but before an explanation can be given, he is attacked by a giant monster. A girl with mysterious powers defeats the creature, then herds you back to your school, with a brief explanation: The creatures are Variants, monsters that can only be fought and killed with those that can use Blood Codes. From there, the player is handed six starter characters that can use Blood Codes, and given a simple mission: Help defend Tokyo against the Variants.

With that basis, the story of 'Operation Abyss' keeps things comparatively simple, with an interesting setting of a near-future Tokyo with secret agendas and impressive technology. It's enough to get players into the thick of the dungeon crawling, which is the core of this Vita title. The game is kind enough to give players a balanced beginning party, as well as explanations on some of the title's mechanics, but from there the player is thrown into the deep end, and is forced to fend for themselves in the game's labyrinths. As such, in the beginning 'Operation Abyss' has a bit of a steep learning curve. Certain concepts, such as the full extent of the crafting system and the utility of certain characters, is left up to the player to discover, while others, such as what pieces of equipment can and should be used by the party's characters, are not so simple to determine.

Even this reviewer, a seasoned dungeon crawling veteran, had trouble acclimating to some of the more obtuse aspects. I went into my first battle completely unequipped, because the menu gymnastics required to view and equip items eluded me for the first hour of the game. Other tribulation like discoveries included having to rest at the Clinic to level up, which left my troops at Level 1 for an extended period of time, the entire trap system (checking for traps means first examine, then disarm, or just open other times), which left my party members poisoned and crippled, and so on. It's possible that this difficulty is part of the charm, but sometimes the beginning learning curve can frustrate more than anything else. 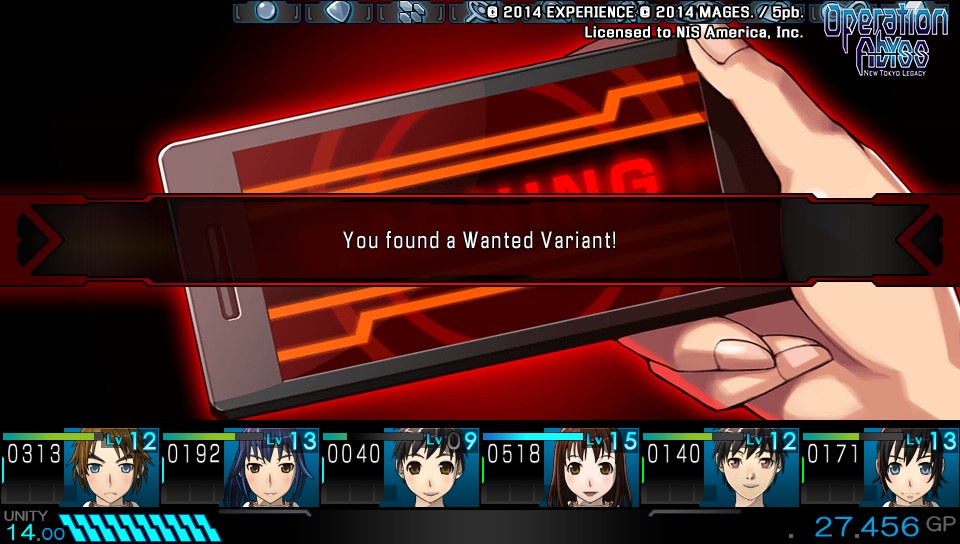 Once over that hump and 'Operation Abyss' is a pretty typical dungeon crawling experience. The six member party will work through a multitude of labyrinths, fighting monsters and clearing missions. Both the exploring and battle system are fairly standard for the genre, with maps auto-filling and battles being turn-based affairs. However, instead of the typical ‘Magic Points’ usage for skills, party members get a set amount of uses for each spell within a certain level, and when characters level up they’ll get more spell uses in lower levels while unlocking higher tiers of spells. It requires a bit more strategizing than the average dungeon crawler in that respect, as players cannot just spam spells to defeat all of the enemies.

Nevertheless, ‘Operation Abyss’ is a good dungeon crawler; it’s just that those that want more of ‘Demon Gaze’s’ more newbie friendly and intuitive mechanical elements may come away disappointed. While this makes sense--’Operation Abyss’ was the first of the two games to come out-- it's difficult not to feel that the earlier title is lacking the latter's most special features. 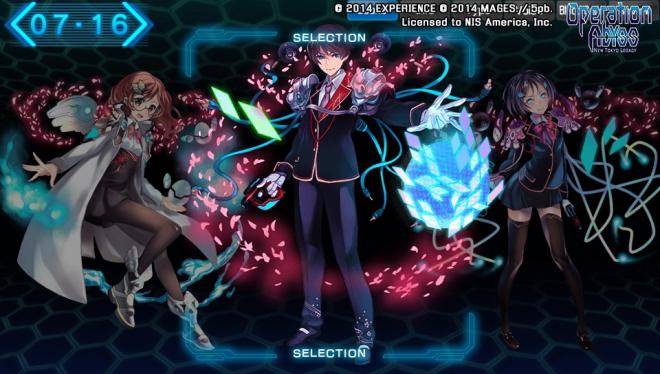 Honestly, being a first-person dungeon crawler, the looks of 'Operation Abyss' are a mixed bag. There's not much to enjoy in the first person view, and the dungeons in particular look bland and same-y in this title. However, the character illustrations for your party members in the Basic Mode look fantastic, and are stylized with vibrant and stand out colors. NPC portraits also look decent. Overall, the game isn't completely devoid of visual flair, but it feels as though Experience could have done so much more with the graphical style to make the title stand out. 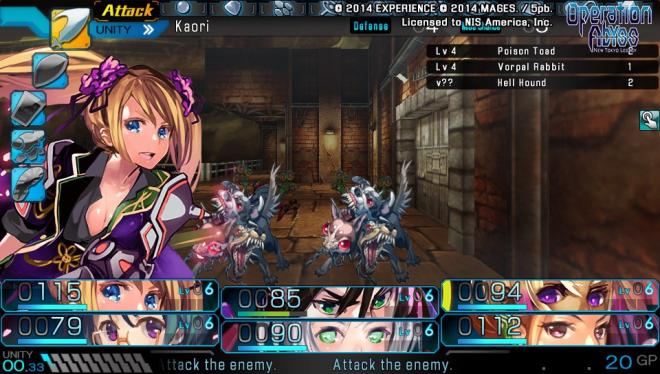 Much like 'Demon Gaze', 'Operation Abyss' has a great soundtrack to go along with its dungeon diving. The tracks are all fitting for the dark atmosphere in the game, with the battle themes particularly standing out. It is certainly worthwhile to listen to 'Operation Abyss using headphones.

The only area of trouble involves the party members' voice clips. Players can choose from a variety of voices for their characters, but they only have a couple clips per voice, so in battle the clips repeat themselves frequently. Essentially each character only has one or two attack and damage voice clips, which gets old rather quickly. 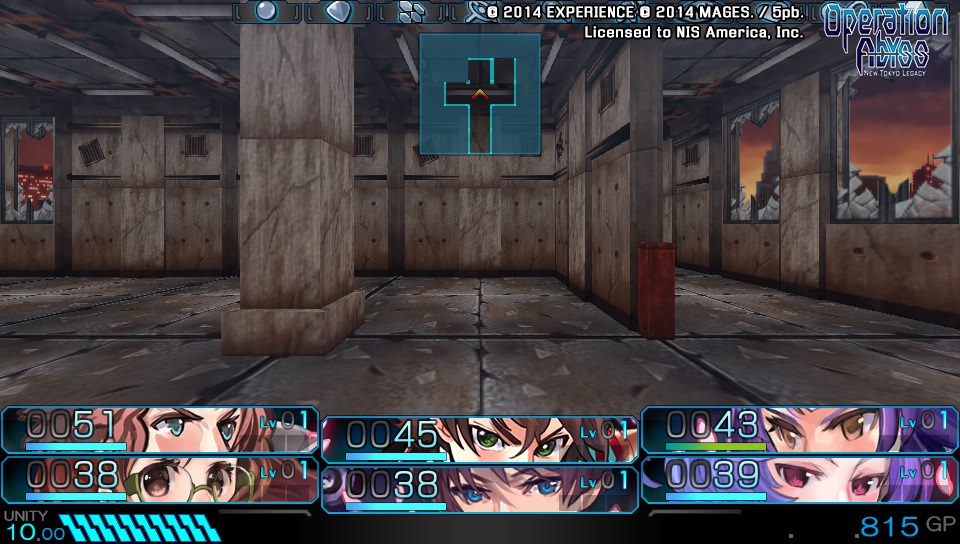 After the main campaign is complete, there's not that much else to do in 'Operation Abyss'. There is a bit of post-game content, but there's little incentive to replay the game, and not even the trophies encourage multiple playthroughs, unless you miss some sidequests in the First Semester.

That said, genre fans can find additional enjoyment by trying out various Blood Code combinations, but even then, they might be hard pressed to play through the whole game again. ’Operation Abyss’ is not perfect; in fact, it’s just a bit average. There are a few standout aspects of the title, mainly in the wonderful art and the neat setting, but digging down into the core of the game reveals a rather cut and dry dungeon crawling experience. Coupled with the difficulty and the lack of direction for various key systems, this is a game best suited for fans of dungeon crawlers, while those new to genre should consider something more accessible and rewarding to start off with.