Creative Draco HS880 reviewed primarily on different PCs, with some use on the PS4, Xbox One, and various other 3.5mm devices.

These days, buying headphones and headsets can be a messy business as performance and usability are often obscured by a spell of endorsements and product lines. The goal is often to push the brand image over the specific model, and in the case of less expensive headsets, to try to make users regret not spending more. Into to this crowded, but not exactly varied space, comes the Creative Draco HS880.

Billed as an "Extreme Gaming Headset," the Draco HS880 is meant to join with the 3.5mm jacks on the user's gaming PC, and take over the audio and chat functions with a nice mix of performance, reliability, and comfort. The price is right, but does the straightforward design hold up? 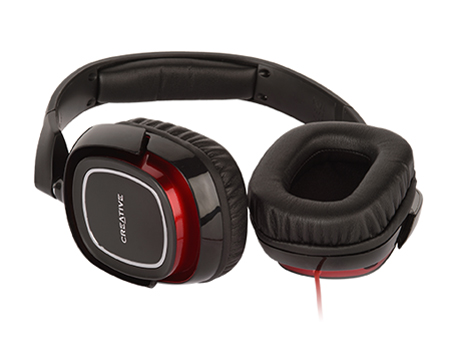 Creative is at it again. Here's a headset that at first glance looks like just another model without anything too special beyond its zany packaging. (The HS880 Dragon face box looks to have been lifted from one of the more extreme video card box designers sketch book.) Right out of the box it has one fairly obvious drawback that suggests an impasse between the engineers and accountants over a Creative. (More on that later).

And yet, with one simple tweak, the HS880 becomes something like a smart product. Not brilliant, but more like a stunning recipe that follows several half-baked confections. In essence, the Draco's 40mm drivers, which have been very effectively tuned for gaming, along with the rest of its surprisingly good innards, (the detachable mic and inline control cluster) have been put into a headset that is light, comfortable, and even folds flat. When combined with decent styling and the strong possibility that the HS880 is much more durable than its light weight construction suggests, the resulting headset is almost a steal, and not just for PC use.

For every user out there who just wants a decent set of over ear headphones to game on, you really need to spend some time with Draco HS880 on your favorite platform. It's quite possible that Creative has lifted the 40mm out of the worldwide bin of headphone parts, but what they've done with it easily outclasses some headsets that are double the price. The Draco is all plastic and pleather to touch, but the over-the-ear design, with its soft, memory foam pockets, lets the drivers do their work. After just a short time spent in 'The Witcher 3: Wild Hunt' on my PC, and I was amazed by the sound reproduction. Whether I was having to deal with the Bloody Baron, or as I prefer, hunting down and challenging all of the world's Qwent players, the Draco rolled with it, and made me smile.

Tooling around 'Far Cry 4,' I was easily able to do my fav trick of hunting animals and bad guys via sound. It's stereo, but each side projects a map that feels quite navigable.

I began to pour into different games, (with admittedly quite a few shooters) just to see if there was anywhere were the HS880 faltered. But nothing I tried, whether it was 3D or 2D, would sway the lively Draco. There is the obvious tilt towards bass, but it's not at an extreme (especially for games). The HS880 has stereo separation that is very similar to a kind of enhanced-for-games sound. This pin point sound makes everything in the soundstage discernable, but the Draco is also very clear in its audio reproduction. The result is no distortion, and neither is the sound tinny.

The Draco does better with music than its gaming focus might lead you to believe. This again has a lot to do with the way the drivers are able to deliver unfettered sound to ears. The light design's occasional bass thump comes with clear sound. 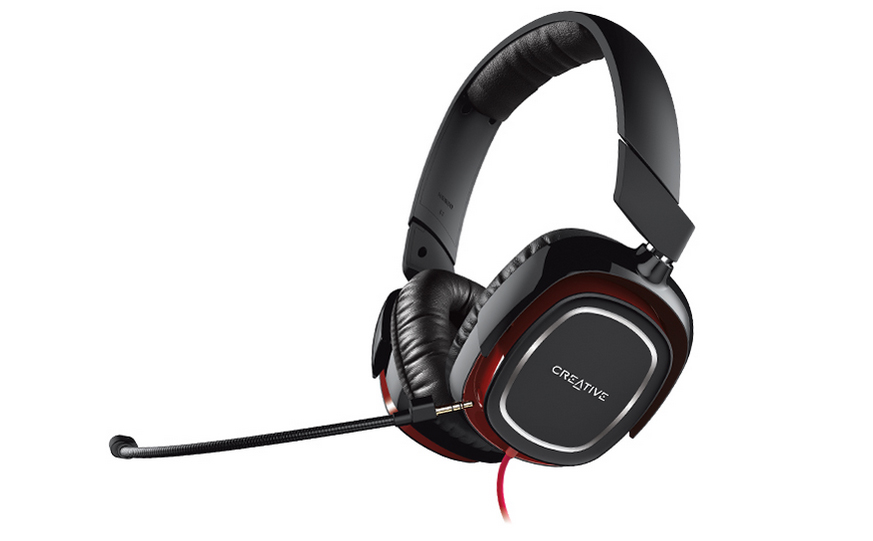 The thin, detachable boom mic is not as impressive as the cans, but then again, all it needs to do really is pick up words and not extra sounds. The mic is described as "sensitive noise-cancelling," but what I've found is a mic that when positioned just right, is sensitive without picking up the rest of the room or too much breathing, wind, etc. In general, boom mics need to be positioned the correct distance from the mouth, but the Draco is little more picky in terms of getting the best result, and still skews toward the sensitive side.

To go with the great sound and decent mic pickup, the Draco sports something that is all too rare these days, an inline volume control and mic mute cluster. The cluster has a clip on it, but I never found it to be in the way or need to be clipped. The mic mute is a simple switch, and the volume control is blessedly a wheel. These features were quite common before the era of the smartphone, and I for one, really enjoy having both control over the volume and the mic mute regardless of what device I'm connected to. 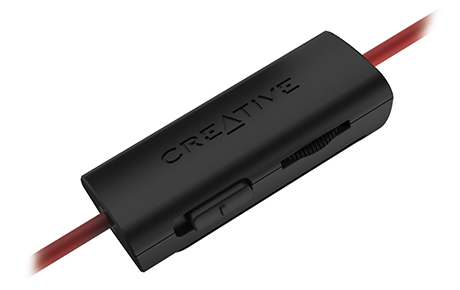 This feature may come at a cost. There is no inline mic option. It's the detachable boom mic or else the headset turns into a pair of headphones.

Fortunately, as headsets or headphones go, the Draco HS880 is extremely comfortable. When looking at the headband's size, it's seems possible that Creative wanted to be sure that bigger heads could fit in the Draco. The result for my medium or so (7 & 3/8s) head size, is practically bliss. The headband and cushion, the swivel earcups, and the ear cushions all benefit comfort wise by the overall lightness.

This is that rare headset that's easy to forget when playing because is causes no stress. Not on the ears, or the temples or the soft spot. It's definitely not a vise grip, but neither is it falling off anytime soon.

At first glance, it's easy to imagine the lightweight HS880 being flimsy, and indeed the plastic shell does emit more plastic on plastic creaking sounds when adjusting than I would like. That said, I think the headband metal innards generous proportion will help it stand up to day in, day out use. The cable is fixed (and very long), so that's another possible fail point. Still, the headset's pleasing fit helps me to imagine it will hold up well short of serious impact. 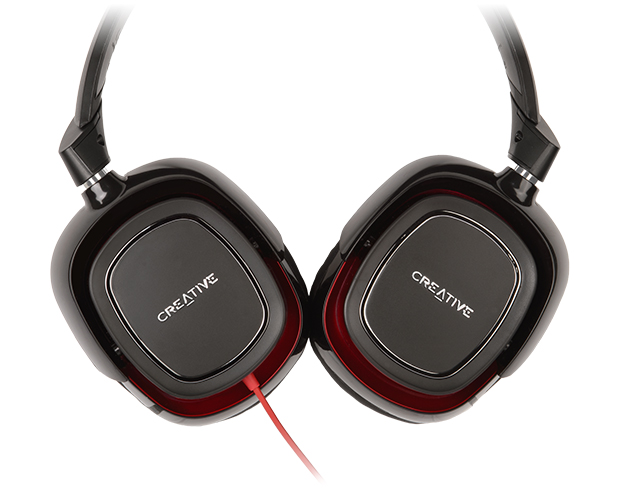 With the cable and inline controls attached, the only inclusion of note in the box is a black carrying pouch with a small Creative logo tag. This leads me to one my one real frustration with the Draco HS880. The headset uses the PC standard of twin 3.5mm Stereo connections (one for the audio and one for mic). While many PCs. Sound cards, laptops, and so forth still sport the required dual 3.5mm inputs, the 3 pole connection used with smartphones is as popular in ever, and that includes many current laptops on the market.

Likewise, both the PS4 and the Xbox One use the 3 pole, and that means many users will need one of these adapters. The extra $6 isn't a deal-breaker, but I wish it was a standard inclusion. Several other Creative headsets use the 4 pole, and the non-inclusion here feels like an omission. (With this adapter, the HS880 became friendly with my Moto X & LG G4, but the iPhone ignored the Draco's mic.)

The lack of an included 4 pole adapter is shame because the Draco HS880 is perfectly suited for use on the PS4. 'Call of Duty: Advanced Warfare' is complementary pairing with the Draco, and those inline controls are exactly the augment needed for the DualShock 4. 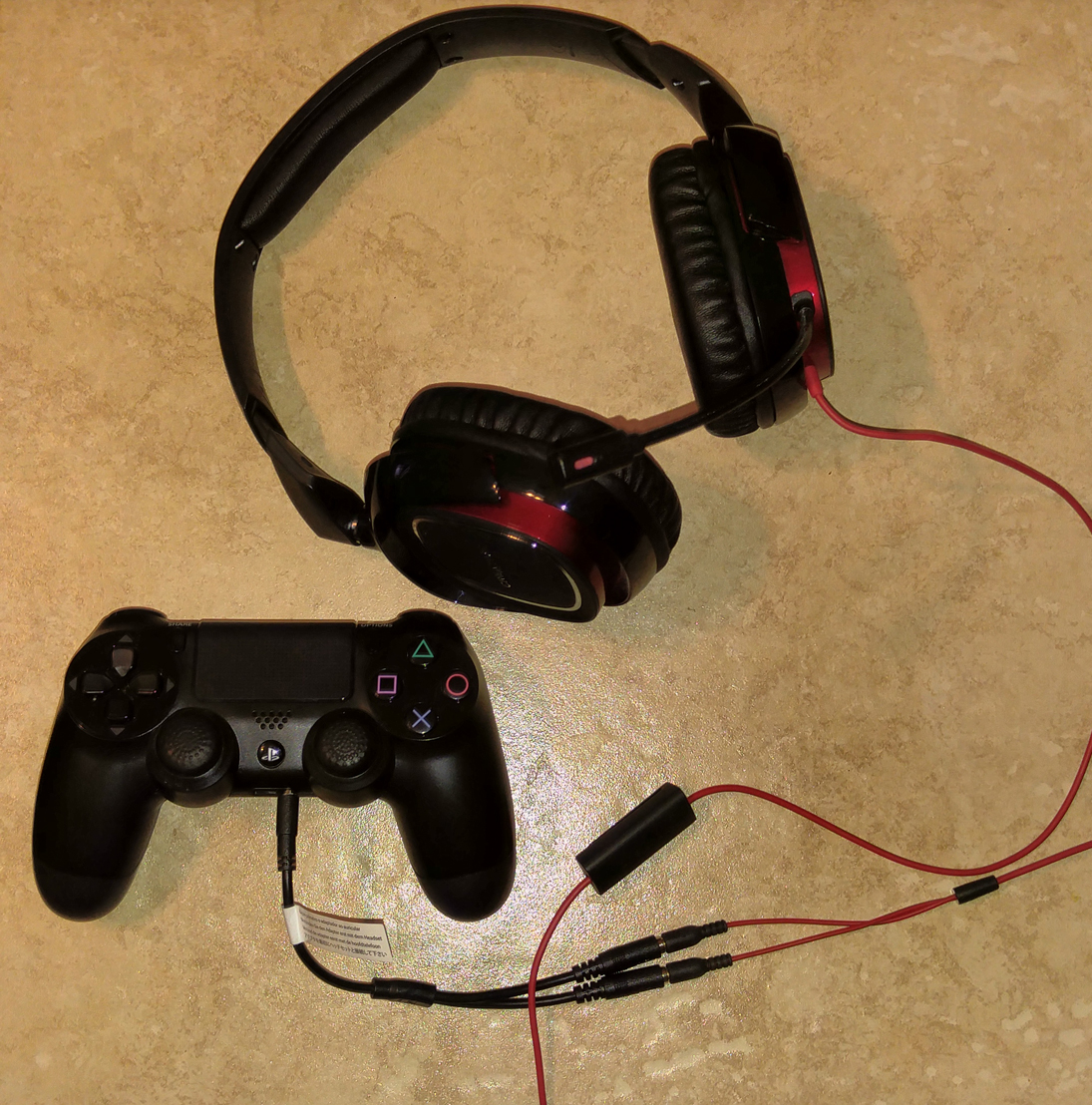 Hooking the Draco up to a chat adapter on the Xbox One controller, and the results are equally as good. From 'Forza Horizon 2' to the tropics of 'Evolve,' the HS880 seems like it was meant for gaming on the consoles.

The light weight, well-performing Draco HS880 is a joy to game with on the PC, and the well-balanced, pin point design sounds great on the PS4 & Xbox One with a little help. That the headset is also accommodating and comfortable makes it a surprise in a segment that usually intentionally cripples either the comfort or performance. It's almost a no brainer at the price, and worth trying to say the least.