The Game Itself
3.5 Stars
The Video: Sizing Up the Picture
3.5 Stars
The Audio: Rating the Sound
3 Stars
Replay Factor
3 Stars
Bottom Line
Worth a Look

PC Steam version reviewed, using mouse and keyboard controls. Portions of this review are shared with our review of the iOS version of 'Divide By Sheep.'

'Divide By Sheep' is a mobile/Steam puzzler developed by the Russian/Ukrainian studio Bread Team and published by tinyBuild (the same people behind 'Boid'). 'Divide By Sheep' began life as a prototype called 'Let Islands Jump,' but after tinyBuild partnered with Bread Team, the game took its now familiar form of a game grounded around sheep, wolves, and the Grim Reaper.

Ostensibly a puzzle game, 'Divide By Sheep' has a dark little backstory involving the Grim Reaper and his need for friends. The Reaper can only befriend the dead, and with the help of his pet kraken, the Reaper has flooded the world, and it's down to the player to try to rescue as many sheep as can be safely floated away. As the game opens up, however, wolves, ghosts and so on become a part of the mix.

p>'Divide By Sheep' is, on the surface, a cutesy, simple puzzler. Each discrete level consists of just one screen and contains an assortment of floating platforms. On each platform is a selection of sheep, wolves, pigs, or environmental hazards, like laser beams and TNT. (Not to mention several kinds of weird platforms that only make sense in game way.) Groups of animals can be moved around the platforms, and the goal on each map is to earn three stars by moving an exact amount of animals to the waiting life raft. Groups must be moved as a whole, and each level has three different goals that must be met in sequence. Meeting these goals earns the player a star, and of course, getting stars require the groups to be cleverly discombobulated. The number of animals and their types are displayed on the left.

The first star may call for three sheep, for instance, followed by two wolves and another three sheep. A level is passed by earning only one star, so the map can be deliberately manipulated to throw away the first one or two stars in order to snag the final star (which may or may not be easier than its predecessors) and move on to the next level. 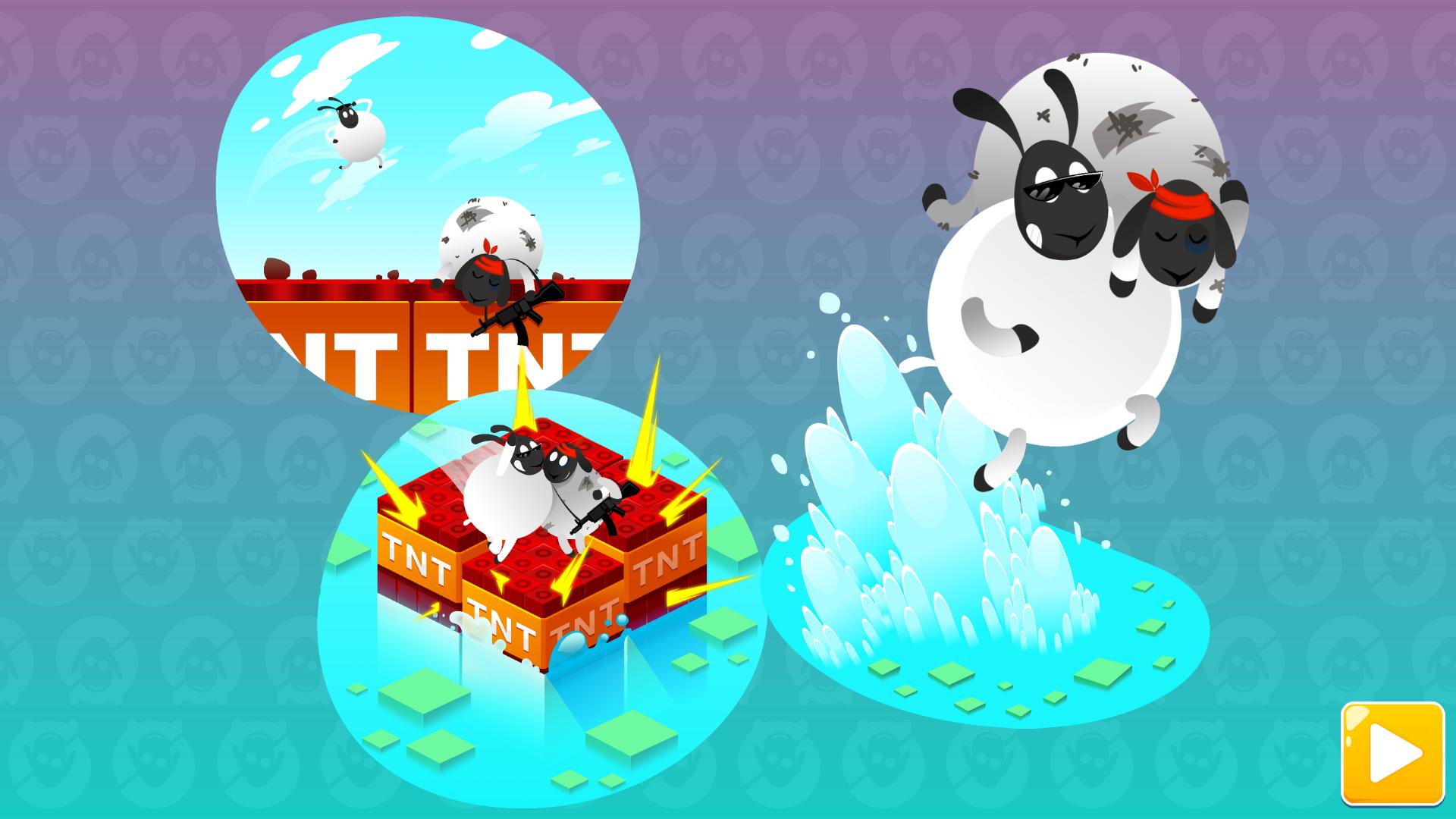 The game in its current incarnation has 120 levels, arranged into four distinct worlds. A certain amount of stars must be earned to unlock the next world, so skipping too many of them will require replays. The puzzles themselves start out almost too simple in the Green World, as many of the game’s mechanics are gradually introduced. There is no tutorial per se - like the animals, I was forced to sink or swim, with just a quick splash screen serving as an introduction before being thrown to the wolves.

Some of the stranger platforms, like the mutual jump construction zone ones, are deserving of a bit more explanation - even a little text would go a long way (localization will be very easy, I imagine). Thankfully, the levels are very brief and easy to restart, with little loss of progress.

Funnily enough, the game's trailer does more to explain the halving sheep mechanic than any kind of in-game explanation:

As for the puzzles themselves, they can be gentle or devilishly crafty, or somewhere in between. Some of them are a quick string of solutions, where one or two moves results in all three arrangements of animals presenting themselves in order. Others are much deeper, requiring many moves, backtracking, and manipulation of hazard platforms to discover even one winning combo. I would often exhaust myself by throwing away many of the animals to discover one combo, and then be left with precious little to earn the other two. Bread Team is very good at always leaving one star easily available, but hiding the other two in a maze of complicated moves. 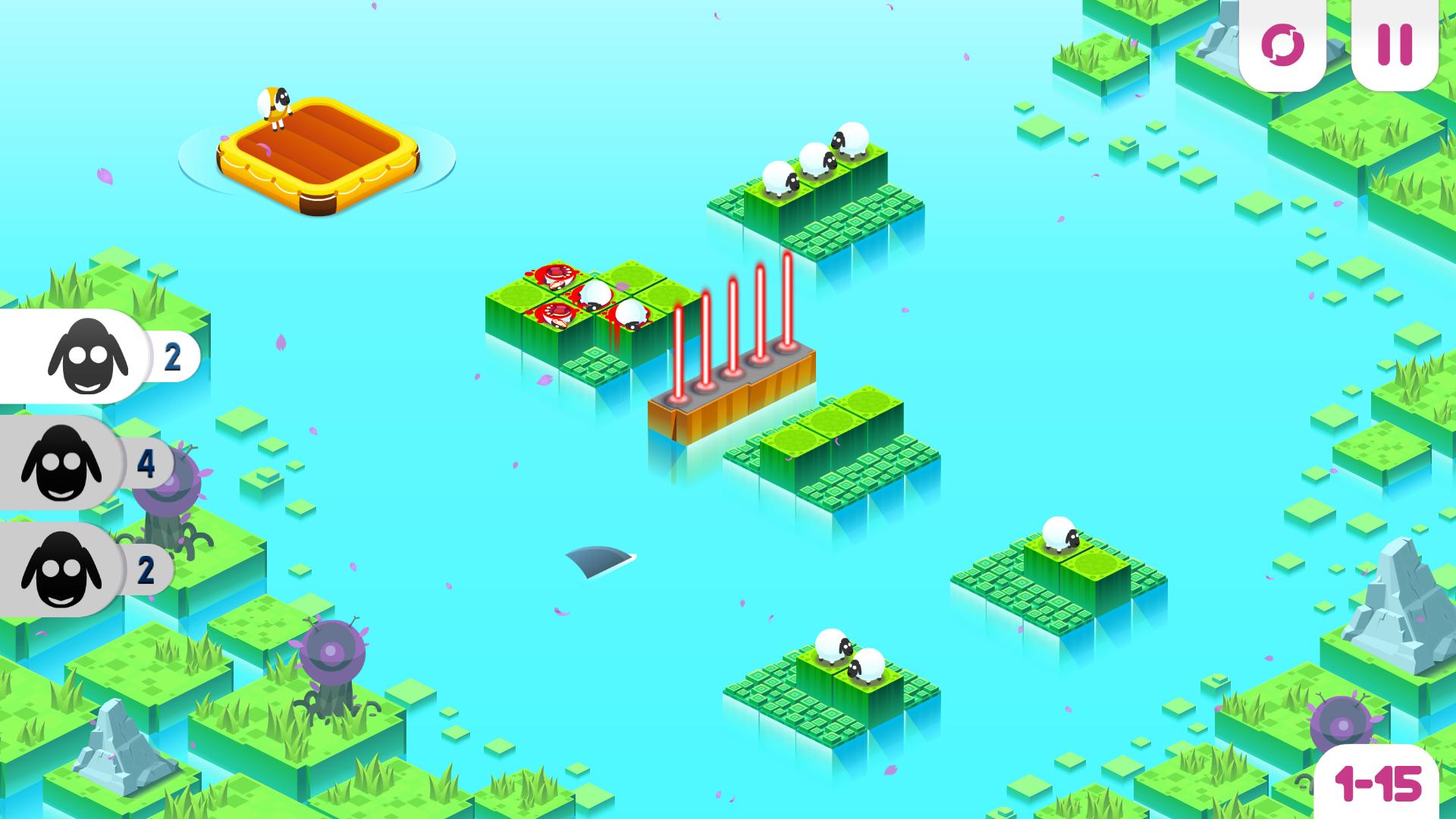 Often times, the introduction of a new mechanic can mean an easy level or two, but the game almost always takes something like a one-way platform or wolf-eating box (a platform that swallows and thereby removes wolves from the board) to a higher level of difficulty before bringing on the next mechanic.

'Divide By Sheep' is very lightweight, with little story or anything else besides pure, unadulterated puzzlery. There was a very short intro cutscene featuring the Grim Reaper, and I think he’s concocted some scheme to collect a large amount of pigs and wolves and such, although his intentions with them are unclear. As with the "tutorials" there is no accompanying text or voice.

Rushing through with just one or two star finishes will get the player the next set of mechanics faster (like when making ghosts becomes a numbered goal), but getting all three stars in each level is when the dynamics truly shine. The math is happening at an unconscious level right up until hitting that hard number that's usually felt when pursuing all three stars.

With the mouse and keyboard, the controls aren’t perfect and seem to have been optimized for touchscreens. The accuracy of clicking and dragging is low, but not enough to pose a serious problem. 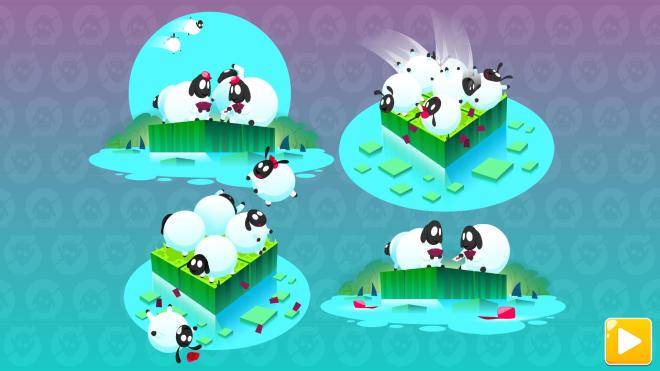 The game's visual style is best described as adorable/grisly. The little sheep and other animals have a chibi style, with rotund little bodies and cutesy faces. In sharp contrast, some of the hazard platforms do terrible things to them, like the laser beams that slice them in two (which make the game’s title a bit of a double entendre) and leave bloody entrails all over everything. The environments and models are typically made up of a single stylized shape or string of shapes that have a glossy sheen. Colors are bright and distinctive.

There is an option to make the game's visuals more kid friendly. What that means is removing the blood from the halved sheep, but there are sheep still being cut in half by lasers and swallowed by wolves. The Reaper also eventually joins the fray, and in those levels, the player's sheep (and wolf) killing objectives are a little more apparent. 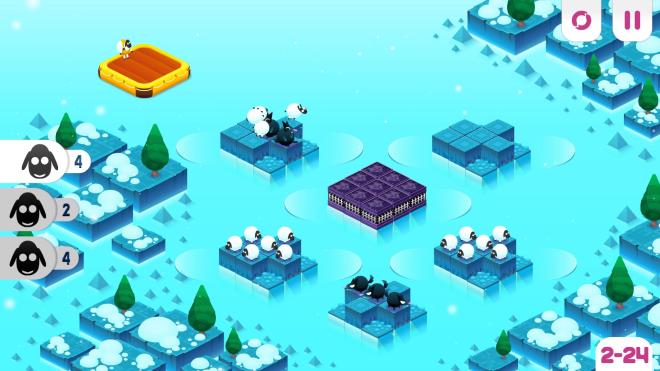 'Divide By Sheep' has no voice acting, but does have a chipper, cheery soundtrack. It tends to get repetitive, but never irritating. Sound effects are simple and standard.

The levels are modular and can be accessed at any time from the main menu, which makes it very easy to identify which levels still have wayward stars to collect. Because the worlds are locked behind star walls, replays are required unless you are a puzzle savant who can collect all three on the first go (kudos if you are, some of these are tough). Once a level has been mastered, however, there is little incentive to revisit it. Each of the 120 levels takes only a minute or two to earn a star, so even with a perfect playthrough, the amount of content is modest.

The game does tease the possibility of future level additions, which ought to be free. 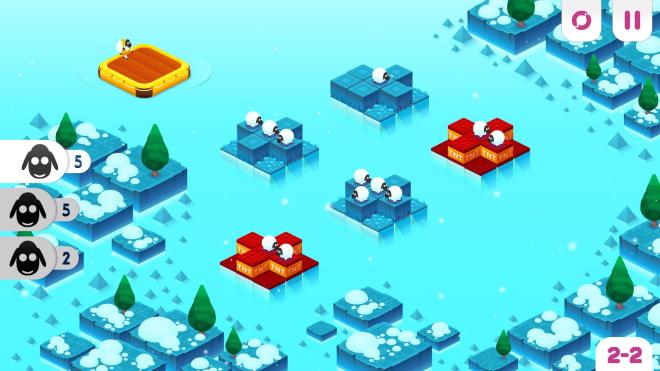 'Divide By Sheep' is a sharp, snappy little puzzle game. It is relatively short, but also smartly designed and has a manageable difficulty curve. Despite its clear mobile pedigree, it is mercifully free of microtransactions. There is a setting in the options that curbs the gore, so it could probably make a great kid’s game (but I wouldn’t classify it as edutainment). A more thorough explanation of the mechanics wouldn’t hurt it, and the controls can be fidgety, but 'Divide By Sheep' is a competent and engaging puzzle experience.