Digital Xbox One version reviewed. Specific notes on the multiplayer can be found in the Replay section.

'Gears of War' is a seminal Xbox 360 title from 2006, and it led to a series of popular third-person shooters, all published by Microsoft (as well as some imitators). In January 2014, Microsoft purchased the IP and tasked their new studio, The Coalition, with remastering the first 'Gears', with additional work being conducted by British indie dev Splash Damage. Rod Fergusson, producer of the original game, is currently employed at The Coalition and continues to oversee the franchise.

With 'Gears of War - Ultimate Edition,' Microsoft is not only bringing back a modern classic, but there is an expectation that 'Gears' multiplayer will take hold on the Xbox One, enthralling a player base of old and new 'Gears' players, and ultimately leading up to 'Gears of War 4.'

The Coalition has big shoes to fill in remastering one of the most beloved 360 games of all time. Throughout much of the 360’s lifecycle, at least one 'Gears' had consistently been in the top ten most played games on Xbox Live at any given time, and the whole series has sold like hotcakes (with the partial exception of the most recent entry, 'Judgment', which struggled a bit in comparison to its older brothers). The work on 'Gears of War: Ultimate Edition' has purportedly been going on for 18 months, which is quite a long time for a remaster. 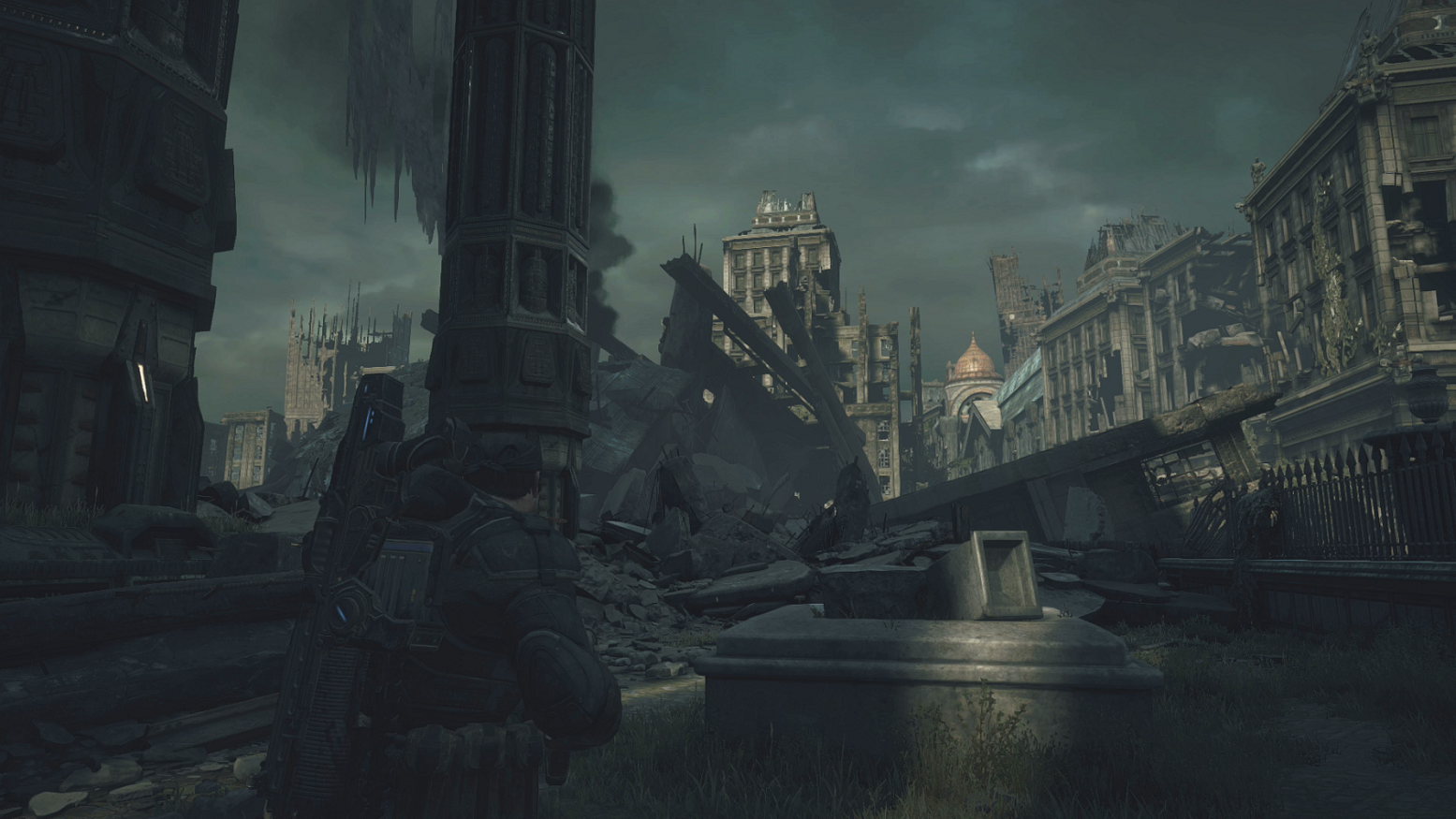 The 'Gears' series is about Delta Squadron, a foursome of soldiers engaged in perpetual battle on the planet of Sera. After eight decades of human civil war, a previously unknown collection of subterranean species, called the Locust, spilled out onto the surface of Sera. The first event, called Emergence Day or E-Day, destroyed a quarter of all human life. The humans have been steadily losing ever since, and their population has been decimated by both Locust attacks and ill-fated initiatives by the heavy-handed human state, the Coalition of Ordered Governments (COG). Fourteen years after E-Day, former soldier Marcus Fenix is released from prison, and he leads a desperate offensive by the COG to destroy the Locust home. 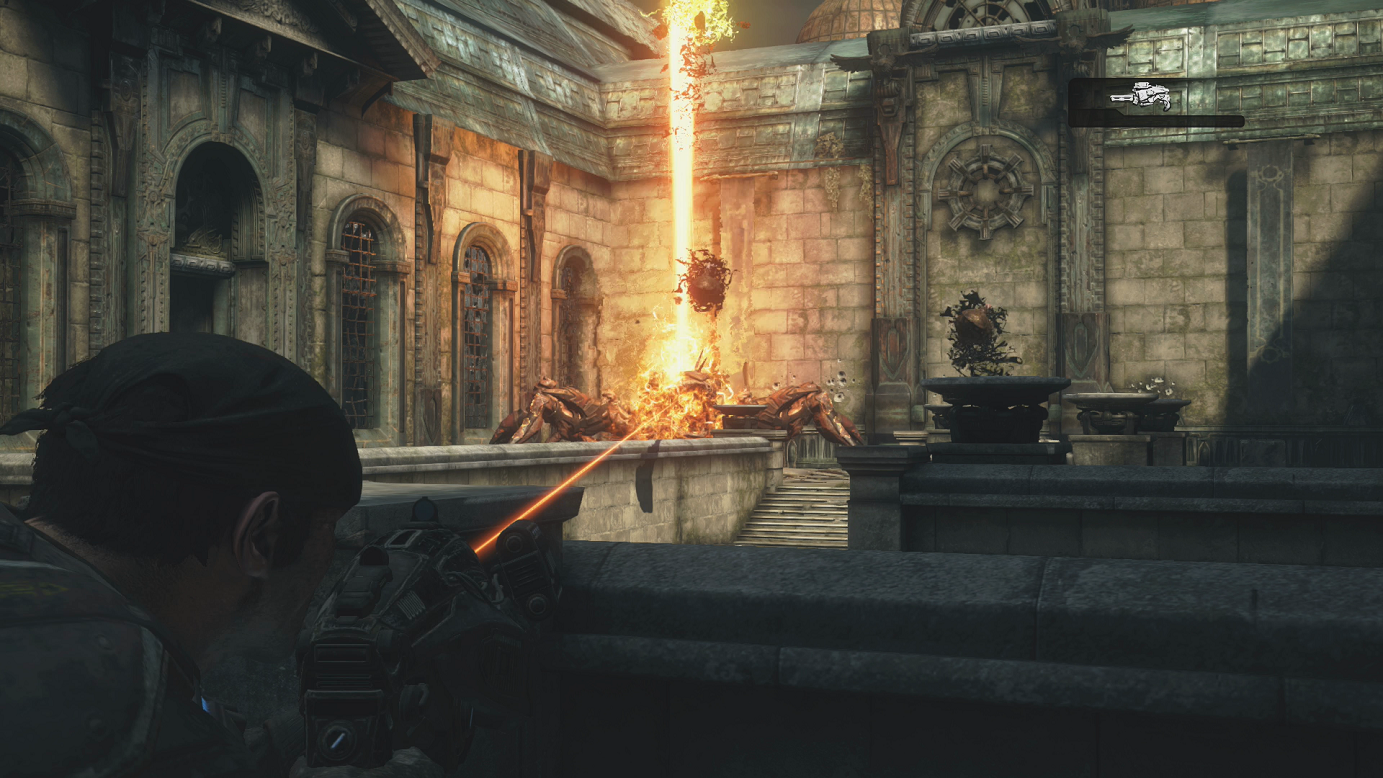 The most dramatic change in 'Gears of War: Ultimate Edition' is the visual presentation, which we’ll get into more detail about later. First let’s talk about the campaign. It plays as nicely as ever, with lots of cover-based shooting, torque archery, and chainsaw bayonetting. The level design has lots of variety, with some great bosses and only a chapter or two of frustrating silliness (like the "drive and shoot kryll with a huge flashlight" section). As expected, there are no problems with the translation to the Xbox One controller, and the default controls are identical. Changes and additions to the campaign are minimal with the exception of the Brumak levels, cribbed from the original game’s PC version. These were also given a next-gen facelift and are quite good for the duration of their 90-minute runtime. 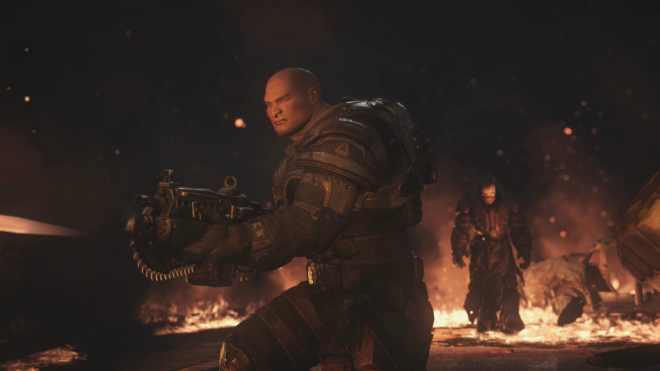 Just as the first 'Gears' turned heads on the 360 with its visual quality, so too does its successor on the Xbox One. The Coalition rebuilt the game from the ground up in 1080p, recycling only audio assets. The result is one of the prettier games on the One; not quite up to the level of 'Ryse', but still impressive. The single-player runs at 30fps with nary a hiccup, while the fancy 60fps rate is reserved for the multiplayer.

The changes are most evident in the character models and animations. Skin, hair, and clothing are very detailed. The ruins of Sera are grandiose in their destruction; even the rubble looks nice. Lighting is realistic and, especially in the case of imulsion and lambent Locust, used to great effect. One side effect of the redraw, unintended or otherwise, is the difference in facial features. Some characters like Marcus and Hoffman remain more or less the same, while Cole and Anya look markedly different. Also, the game on the whole is very dark, particularly when not on the surface. 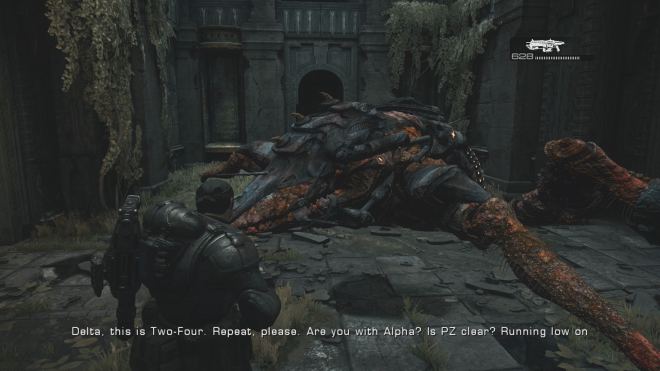 As the game uses the original voice acting and score, there are few changes in the audio department, which was good to start with. Of note is the inclusion of Dolby 7.1 surround.

The campaign offers split-screen and online co-op for two players, and is highly recommended for those wishing to crack the Insanity difficulty level. Insanity is good practice for multiplayer, where a single mistake often results in death.

This version of 'Gears' would appear to be a Trojan horse meant to bring 'Gears' mutliplayer (like the Execution and King of the Hill modes) to bear on a online hungry audience. At the same time, it seems like Microsoft has learned a lot from last year's 'Halo: The Master Chief Collection.' For one thing, there was the 'Gears of War - Ultimate Edition' multiplayer beta. The released version looks modestly better than in the beta. There are a few new gametypes, like the 2v2 shotgunner (although most 'Gears' multiplayer seems to be shotgun matches anyways). The skill-based matchmaking is not great but is a large improvement over the original game. Also, there are two tiers of multiplayer - a social area for less serious players, and the competitive area with full xp bonuses and quitting penalties. 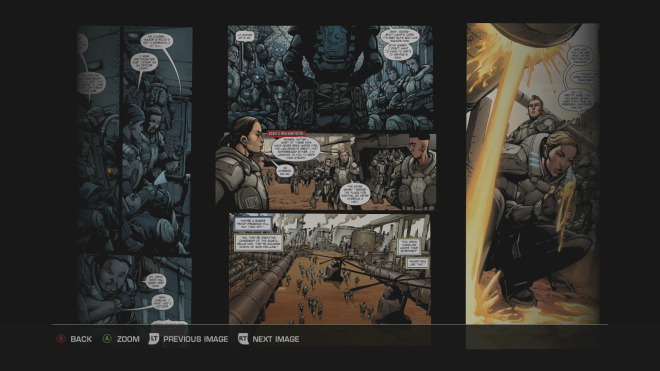 Besides the added campaign chapters, 'Gears of War: Ultimate Edition' adds two goodies: concept art and several comic books, the latter of which is unlocked by collecting COG tags in the story mode. At the time of this writing, a purchase of the game includes a ticket for the 'Gears 4' beta at some point in the future, as well as tokens for all of the previous games in the franchise when backward compatibility launches this fall. 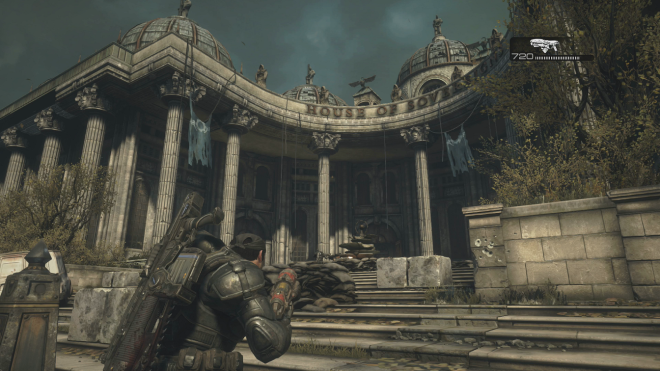 'Gears of War: Ultimate Edition' is not a mere port, but a labor of love a long time in the making. The price tag is a bit steep with much of the new content geared towards multiplayer aficionados, but this is a lovely showing of Delta Squad on the One.