The Game Itself
3 Stars
The Video: Sizing Up the Picture
3 Stars
The Audio: Rating the Sound
3.5 Stars
Replay Factor
2 Stars
Bottom Line
Recommended

Ah, those charming Smurfs. Created by Pierre 'Peyo' Culliford in 1963 as a diminutive comedy element in his acclaimed comic strip series 'Johan and Peewit', the blue buggers soon proved to be breakout characters and subsequently stars of their own series. Waffles, beer and chocolate are famous Belgian export products, but The Smurfs may top them all. Who doesn't know these adorable creatures, in no small part thanks to the quite excellent Hanna-Barbera cartoon from the 80's.

Fun fact: 'Smurf' is the same word in Dutch, but the original French name is 'schtroumpf'. During dinner, Peyo asked his friend André Franquin (my favorite Francophone Belgian) to pass the salt, couldn't remember the name of the everyday product, and instead blurted out 'Pass me the Schtroumpf!'. That's how you create the stuff that dreams are made of, folks. Sadly, the great man passed away long before his time, reportedly by the stress brought on by his creation's worldwide fame. The newest addition to the merchandise juggernaut that is 'The Smurfs' is the eponymous game for the Nintendo 3DS. Will the blue buds charm our pants off in this outing, or will it be Azrael fodder?

'The Smurfs' is not the first video game for the franchise. Almost all consoles (going back as far as the Colecovision) have seen virtual iterations, cash-ins, prequels and sequels to the works of Peyo. In fact, 1994's 'The Smurfs' for GameBoy (also on every other major console at the time) by the now-defunct Infogrames is one of my favorite games ever, and a likely candidate in a hypothetical rundown of good licensed games. For comparison's sake, I replayed the game all the way to the end (just ten levels, and a few bonus stages) in order to prepare for this new review. I still know the two passwords by heart, and the end credits music is still infectious. 'The Smurfs' for 3DS obviously has huge boots to fill.

Upon startup, the Smurf village is completely wiped-out, in shambles, and destroyed. Why, when, and by whom? Let's find out! Papa Smurf is our narrator, sadly without actual narration. His character model is animated, but there's no voice. Should be doable in 2015, I reckon, so it's probably a case of 'we didn't feel like paying for voice-actors'. "It's a catastrosmurf!" proclaims Smurfette. But, the opportunity to create a new and improved village arises. "One Smurf at a time." Yes, the puns are everywhere.

Gameplay consists of various minigames. Rebuilding the houses requires wood as currency. The actual act of building comes down to a variety of microgames. Sometimes it's little more than sliding the stylus onto logs (no, not those logs), cutting them up, and tapping the stylus as if to emulate hammering a nail. Other times it's trying to snag and fit as many Tetris-esque shapes into a laid-out pattern. Now I'm out of wood, so it's off to the forest to 'smurf' some wood. Another minigame ensues: tapping the stylus on certain weaker areas of a tree, in order to cut it down, then saw the trunk. A minecart and a mine made me hope for some Donkey Kong Country/Indiana Jones and the Infernal Machine-shenanigans, but the actual minecrafting was left to the bare minimum. Moving the target, aiming at cracks, digging into the cracks with the pickaxe button, and then rolling the cart with the stylus to catch the stones. The cooking minigame is the best of the bunch, combining placing the ingredients in a bowl, mixing, flattening, heating up, shaking and even cooling down (by blowing into the 3DS' microphone) for a fun-filled event.

Little by little, small fragments of the village are repaired. Each rebuilt house has a purpose. For example, in Hefty's house, all mini-games can be practiced. Papa Smurf's abode is where your progress is kept, including a handy list of all collectables such as scrolls of paper, character models, actual panels straight from the comics, and tunes. The Smurf houses can be decorated as well, which gives the game some nice Sims-touches. It's all very easy, obviously aimed at young children. Then again, attaining a perfect three star rating during these minigames, is no mean feat. As such, older children may get a kick out of trying to get better scores. There's automatic saving after every aspect, so it's easy to keep track of the progress made. Another dead giveaway of the game's easy nature, is the impossibility to get stuck. A big fat arrow will always point to the next point of interest. The ease of the game is nothing to scoff at, because a frustrated gaming child is nothing but heartbreaking for parents.

One thing that's admirable, is how options gradually become available, almost as in an RPG (did I just compare the easy 'The Smurfs' to one of gaming's most hardcore genres? To quote Chris Rock: 'Yeah, I said it!'). Once Chef's house is up and running again, cakes can be baked and used in mini-games! The cakes act as a power-up. Just like in 'DuckTales', yes, and 'The Smurfs' automatically gets an extra point for reminding this jaded old fart of a video game reviewer of said excellent Capcom title.

So who did destroy the Smurfs' village? I could tell you, but what incentive would that leave for you to check out the game? 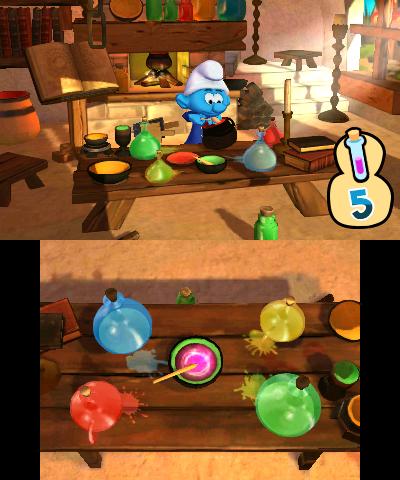 Cute, cuddly, colorful graphics and potent character models, but nothing the DS couldn't pull off. The 3D effect is nothing to write home about. Still, presentation-wise, this is a charming title. I was most pleased with the fullscreen strip panels, ripped straight from the comics I devoured when I was a young lad. 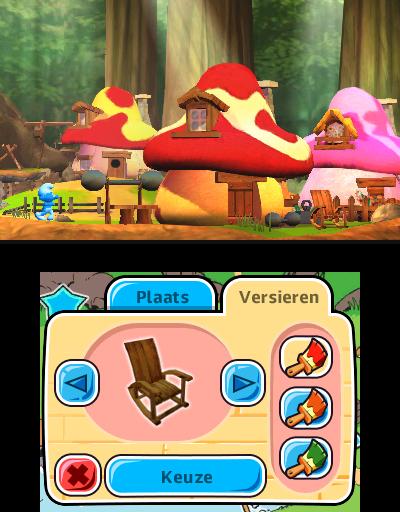 Excellent lifelike whistling birds in the background, a strong (but repetitive) theme, and lots of different tunes to collect. Harmony Smurf’s podium minigame is 'Guitar Hero'-light, with funny yet repetitive results. The lack of voice acting or the vintage Smurfs theme from the cartoon is a glaring omission, though. And isn't it a tad sad that the 1994 version had a far superior soundtrack?

A fair amount of time will be spent completing the game, and all mini-games can be replayed at heart's leisure for higher scores. 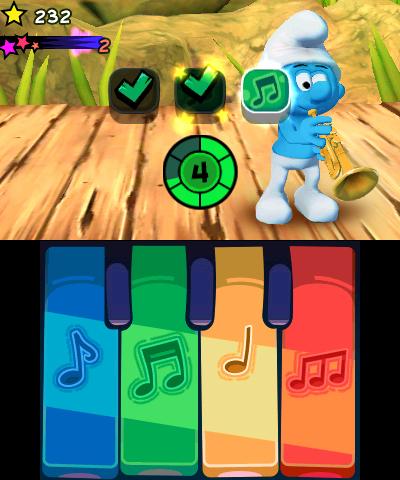 'The Smurfs' for 3DS is a far cry from the extreme excellence of the 1994 title, but it’s also a completely different game. The 21-year old classic was vintage platforming goodness, this is a solid collection of mini-games aimed at the youngest amongst us. Good, clean, harmless, and solid fun that comes recommended for lovers of the comic or the cartoon. A perfect handheld game to play in short bursts.