The Game Itself
3.5 Stars
The Video: Sizing Up the Picture
3 Stars
The Audio: Rating the Sound
3 Stars
Replay Factor
3 Stars
Bottom Line
Worth a Look

'Tachyon Project' is a shoot ‘em up created by Eclipse Games, a 5-man team working out of Zaragoza, Spain. Eclipse is a relatively new studio with only a few games under their belt. 'Tachyon Project' will see release on the Xbox One first, to be followed later on PC, Wii U, and PS4.

'Tachyon Project' is not terribly different from 'Geometry Wars', perhaps the most notable shmup series in recent memory. Imitation is the sincerest form of flattery, as they say. The player controls a little spaceship that zooms around a two-dimensional field, moving with the left thumbstick and shooting endless bullets with the other. Enemies come in the form of colorful critters that each have a distinctive ability - snakes are resilient, shieldbearers take reduced damage from the front, constructors can create other critters, and so on. Each enemy killed increases the score multiplier, which slowly ticks down when no one is being killed, and resets if the spaceship is touched. Defeating an enemy leaves energy pills in its wake, which can be collected to increase the score. 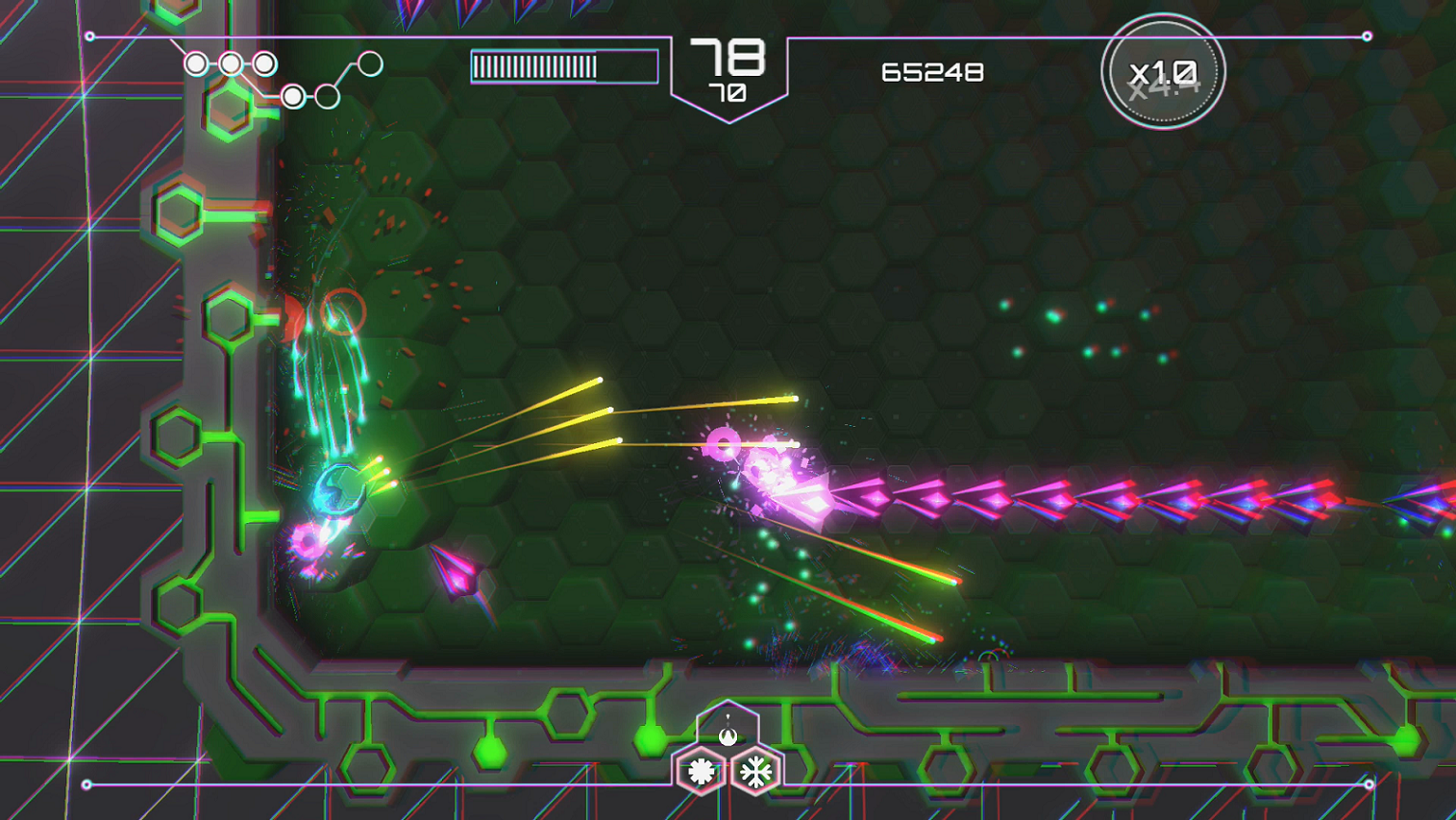 The campaign has 10 levels, and every level has a half-dozen waves that must be completed in one go (although there is a checkpoint at each wave in case of defeat, thankfully). Every wave is timed, and time serves as the spacecraft’s health. Being touched by an enemy or using a special weapon drains seconds from the clock, while killing an enemy adds time.

Before each level, I could customize my spaceship. There are several main weapons, like a shotgun blast, machine gun, or laser, and secondary weapons like automated turrets and drones. I could add health/seconds to the beginning of each match or make my ship faster. Later, after being unlocked through the accumulation of points or completion of levels, more advanced abilities become available, like slowing down time.

The storyline, while relatively short, has a steady progression of difficulty and new abilities, at least until level seven. At seven, everything went to hell. A bullet hell, specifically. The screen became so clogged with enemies that I could hardly move. It wasn’t hard so much as cheap, especially considering that the previous level had been moderately challenging but not insurmountable. This was exacerbated by the irritating problem of spawning enemies not adequately telegraphing their impending arrival, so they had a tendency to spawn right on top of me, which is a matter of luck and not skill.

Unlike many shmups, 'Tachyon' has something of a story. The little spaceship thing is actually the avatar of an advanced AI named Ada that exists only in digital form. It was created by two hackers to worm its way into secure servers, and the enemies it shoots are supposed to be security programs or some such. At the beginning of the story, the two hackers are abducted by an unknown force, and Ada must hack its way into police and corporate servers to determine their whereabouts, as it considers the two humans to be its parents. I don’t think the story adds much to the game, as I would be quite happy to shoot at colorful spinning gadgets without it. The writing is also a bit raw, as though it didn’t completely survive translation from another language. 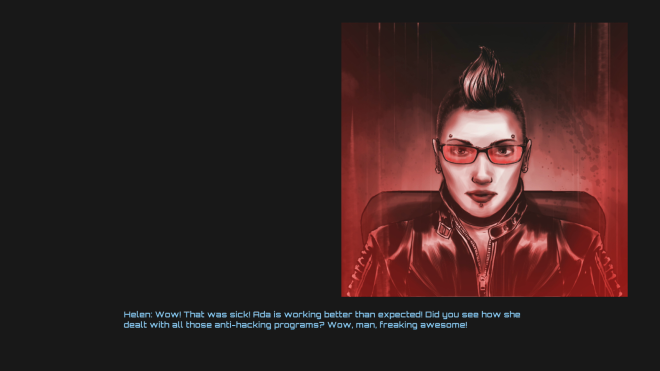 If 'Galaga' or 'Defender' had been created in the modern day, they would probably look a lot like 'Tachyon Project'. The game’s modest, arcade-style visuals are colorful and explosive, and the different enemy types are easy to distinguish from one another. The background and hex grid aren’t much to look at, but there’s so much going on in the screen that you probably won’t notice them anyways. The game has very few issues with stuttering, although there is a time distortion effect when certain enemies are killed that can disrupt play for a split second. 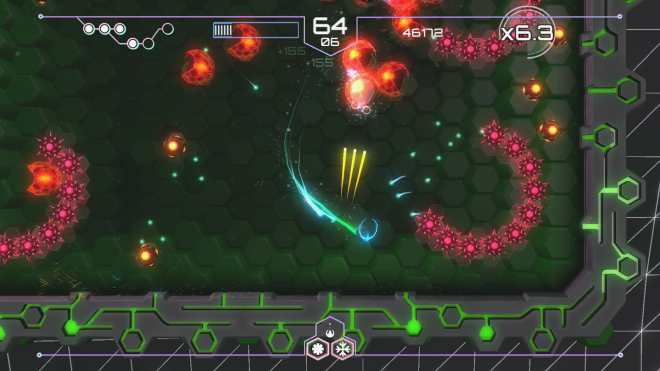 The soundtrack alternates between high-pitched electronic dance rhythms and more relaxed, sedentary tunes. Both complement play in their own way, and the fast ones in particular are pretty good. The sound effects are objectionably discordant and jarring, especially when Ada is struck by an enemy or, curiously, in the pause menu, which I feel compelled to mute while I write this because it is so loud and dissonant. The cutscenes are unvoiced.

Some of the weapons and abilities are locked by point scores, requiring me to return to previous levels to earn them. There is a challenge mode but it’s rather light, with a sparse handful of modes that go by too quickly. To its credit, however, it can be played in local four-player co-op, which is a blast. As mentioned, the story is brief, and a shmup veteran can probably clear it in less than five hours. 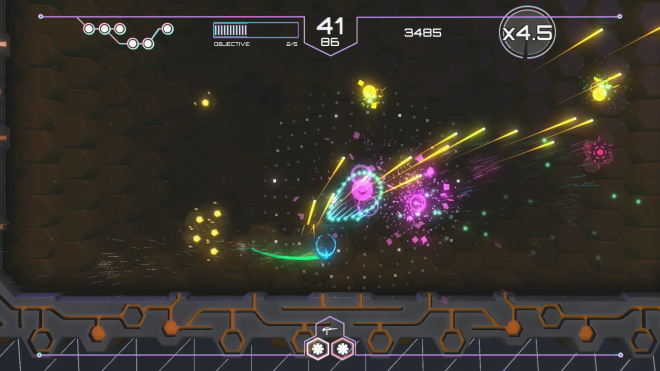 'Tachyon Project' does stand out on its own from 'Geometry Wars', but its inspiration borders on the derivative. The cadence of the campaign poses a problem, what with the first three-quarters being a bit too easy and the last quarter being much too hard. The challenge mode also seems like a missed opportunity. 'Tachyon Project' is a competent shmup, but isn’t much more than that.