The Game Itself
3 Stars
The Video: Sizing Up the Picture
3 Stars
The Audio: Rating the Sound
3 Stars
Replay Factor
2 Stars
Bottom Line
Skip It

'Magic Duels: Origins', hereafter referred to as 'MDO', uses the very recent Origins set from the paper 'Magic' game. As its name would suggest, it explores the beginnings of several iconic planeswalkers from the multiverse, including Chandra and Liliana Vess. This is done through five different campaigns, each containing five battles and starring a planeswalker. The decks used in story mode are premade, cannot be altered, and slightly increase in strength after each victory. They also cannot be used outside of the campaign unless you happen to own all of the cards individually. 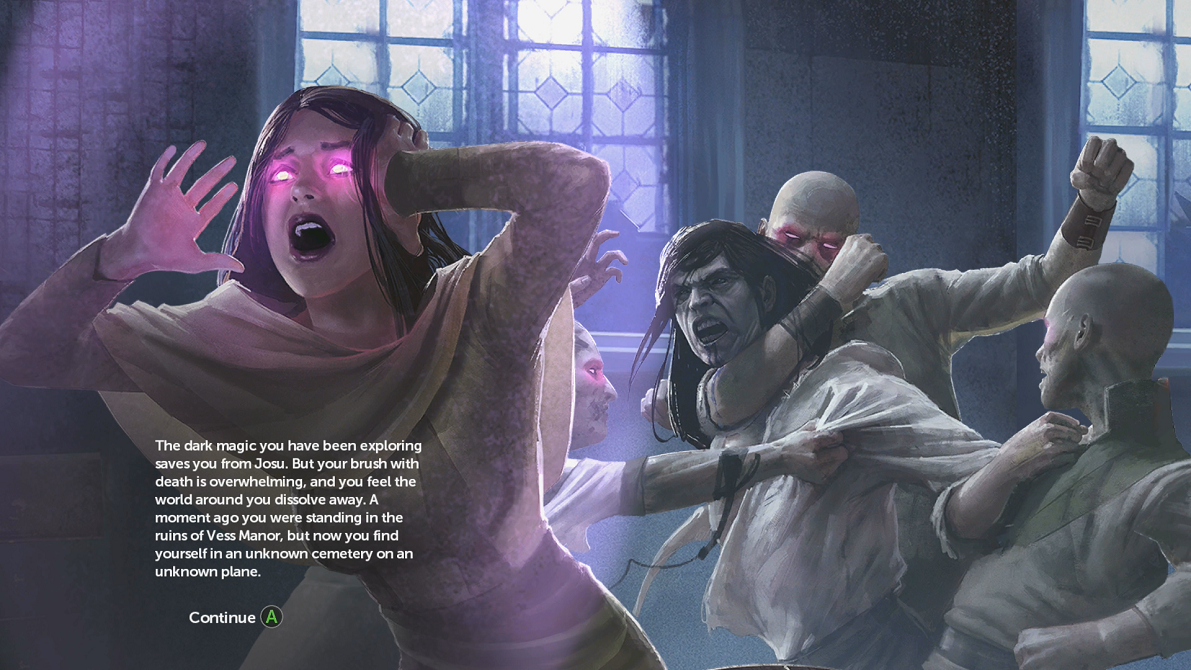 'MDO' is beginner-friendly, but like its predecessor it is not very expert-friendly. The long tutorial is unskippable and hint pop-ups are common and tedious. It doesn’t matter if you’ve been playing 'Magic' for twenty years and are a professional tournament wizard - you’re going to play Stainless’ tutorial again, by gum. At least there are some rewards to be had by playing through it, such as unlocked cards and gold. Yes, just like a mobile/casual game, this is the first 'Duels' entry that is free-to-play. Last year’s version was controversial for requiring players to buy the game and then begging for more cash to unlock sets and boosters. 'MDO' is the lesser of two evils - gold can still be purchased with real life money, or it can be earned via winning matches and completing daily quests, a la 'Hearthstone' or 'Heroes of the Storm' or pretty much any social game out there anymore. 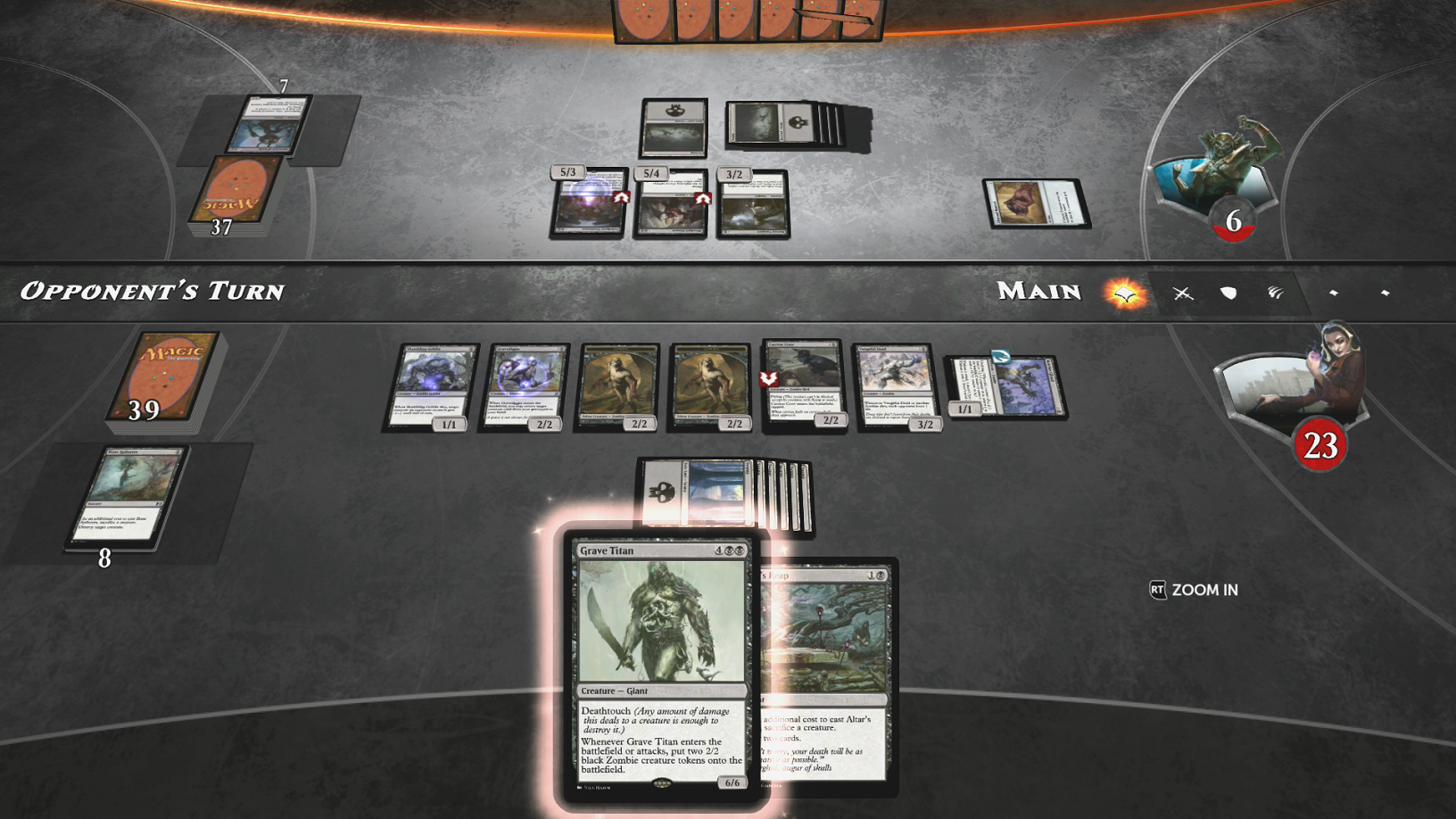 Stainless has promised that this will be the last 'Duels' game for the foreseeable future, and that it will serve as a platform for future content instead of a perennial release. Presumably, all expansions or DLC will be added to 'MDO', either as a paid download or an addition to the base game that can be unlocked with gold. DLC would not be unwelcome, as the game’s base library of cards is relatively small, around 800 or so.

'MDO’s' content is not massive, especially when taking the library size into account. The story mode’s 25 battles goes by quickly, even though they are more difficult than those from previous entries (one battle, when playing as the green-oriented Nissa Revane, gives the opponent 100 life and an Eldrazi deck - good luck). Finishing the story earned me 750 gold coins, which is enough to buy 5 booster packs. A booster pack contains only 6 cards. Once that campaign is complete, the only single-player action you’ll find is playing against the computer for 5-15 gold, depending on the AI difficulty (with no reward for a loss). If you play at the medium difficulty, you’ll need to win 15 matches to buy a booster. If we estimate 10 minutes for a match, and assume there are no losses in between, it will take two and a half hours to earn 6 cards. As with most free-to-play games, Stainless is deliberately withholding with rewards to induce dollar purchases. A booster pack of six cards is $2, which is also not generous. In paper 'Magic' and 'MtGO', a 15-card booster pack typically costs around $4. 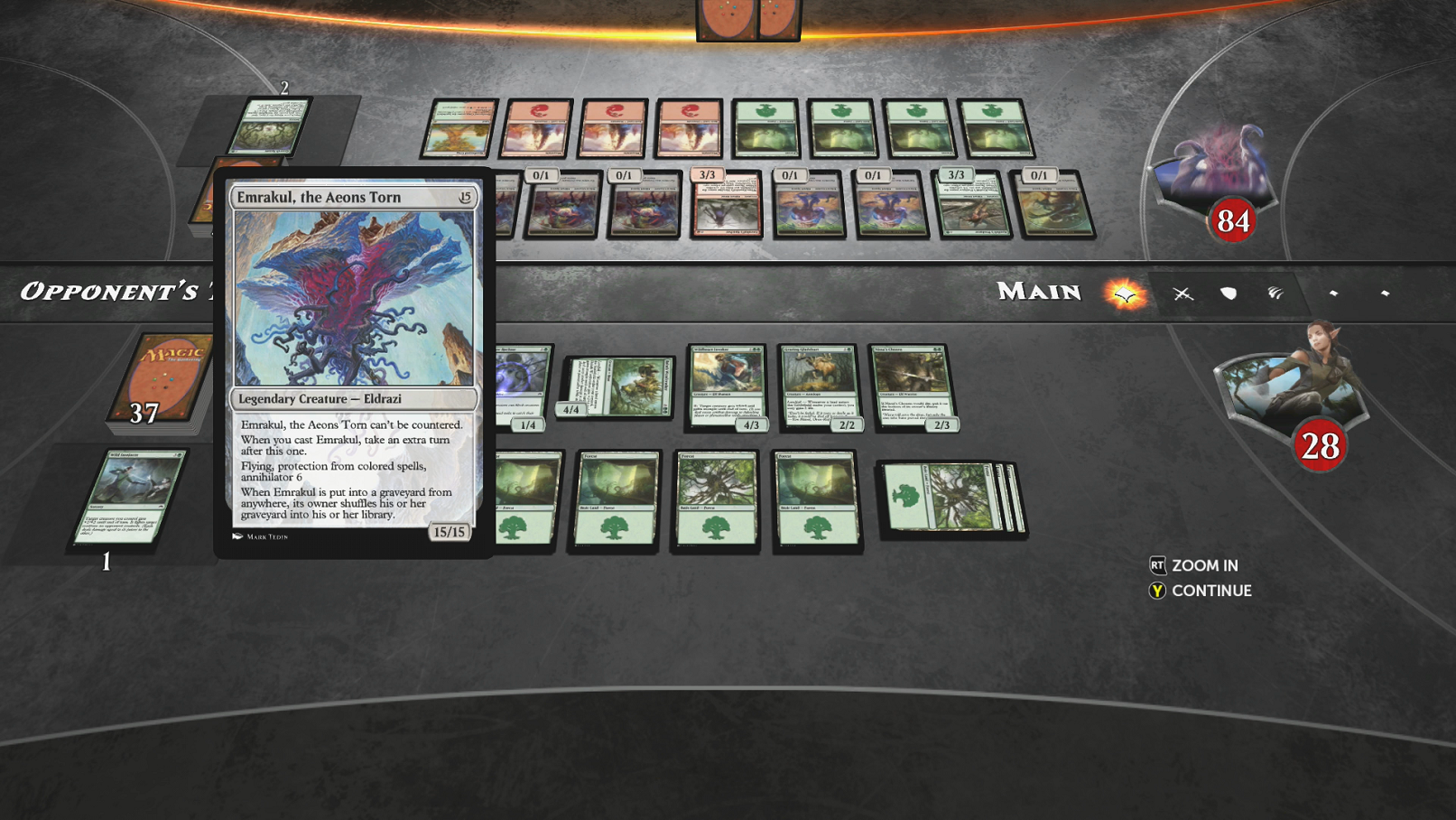 Issues with the payment model aside, 'MDO' plays well. Settings can be fine-tuned to make advantageous decisions for the player automatically, vastly speeding up play. The 'Magic' rules are implemented perfectly, and after many hours of play I have yet to see a rule mechanic be used incorrectly. The AI is competent at the easy difficulty level but still makes a few mistakes. On hard, they play each card at the perfect time. The only odd thing I’ve noticed is that mana flooding is very common, even in decks with a low land ratio (mana flooding is when a player has too many lands and not enough damage-dealing cards). 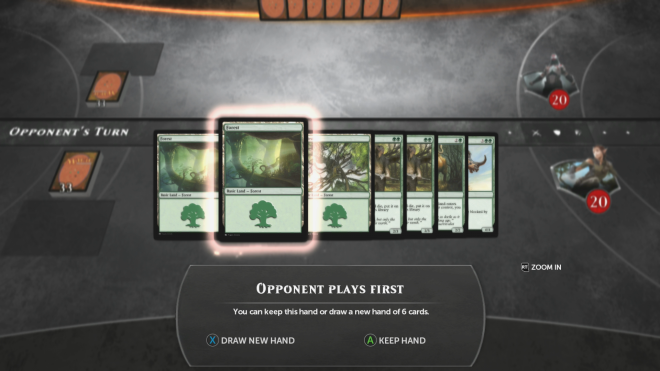 The visuals are decent if not great, but the beautiful art of the 'Magic' cards is fully represented. Maneuvering around the board is still a bit of a pain, especially when trying to get into the opponent’s graveyard, but the series has made serious improvements since the early releases. Unfortunately, there are long load times, and hangs are common during matches. The brief cinematics after each campaign look cheap. 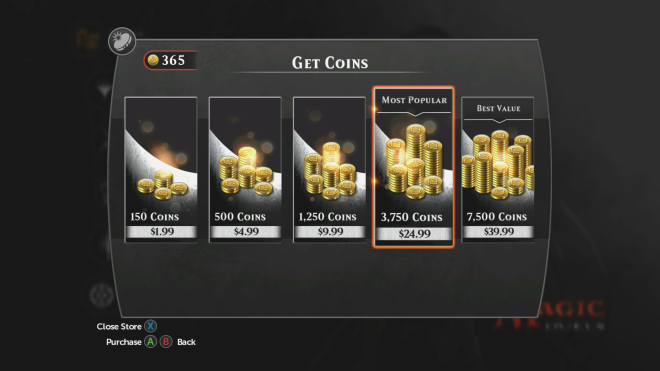 The soundtrack is rather bland, with lots of soft piano and percussion. It doesn't do much to liven up matches, although a few tracks stand out from the rest. The sound effects are adequate and there is no voice acting - during the campaign, all information is relayed via text during the load screens.

This is where a CCG should stand out, but due to its frugality and lack of gameplay modes, 'MDO' has little to offer. Two-headed giant does return, and there is a satisfactory deck builder (although the deck builder wizard should be avoided for all but the newest 'Magic' players), but there’s none of the other great formats that have been introduced to 'Magic' over the years, or anything novel like Stainless did with the Planechase feature in 2014. The daily quests offer a reason to hop in for a few games each day, and if you don’t like your quest, you can re-roll it once per day. 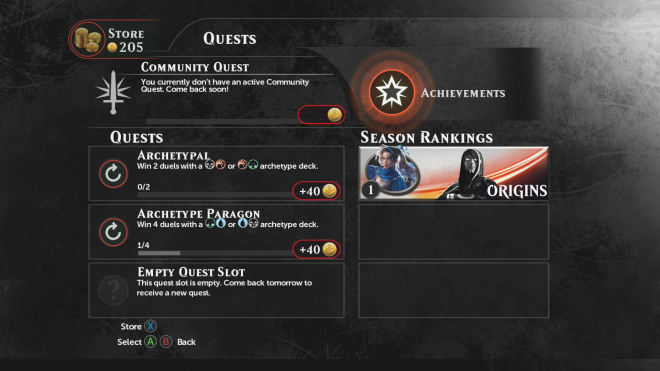 Every version of 'Duels' over the years has been fun, but has been missing something - a deck builder, an ergonomic interface, etc. This year's iteration, 'Magic Duels: Origins,' is missing several of them and is a skeleton of 'Magic' draped in the fool’s gold of the free-to-play model. Perhaps Stainless can use it to build something really cool in a few years' time, with lots of modes and cards and avenues of play. As it is, it's hardly worth playing even with its asking price of free.