The Game Itself
4 Stars
The Video: Sizing Up the Picture
3 Stars
The Audio: Rating the Sound
4 Stars
Replay Factor
4.5 Stars
Bottom Line
Recommended

'World of Tanks' is developed by the Belarusian-owned and Cyprus-based company Wargaming. Wargaming has an interesting history - they are one of the largest Cypriot companies despite being relatively young, they have purchased a significant share of a prominent Cypriot bank, and they assist with military history and charity efforts worldwide, especially the restoration of antique tanks. 'World of Tanks' is their flagship product. First released in 2010 to the Russian market on PC, it has grown by leaps and bounds and eventually surpassed the MMO juggernaut 'World of Warcraft' in microtransaction revenue. The game was in beta for some time on the One before its recent full release, and was preceded by a version on the 360.

'World of Tanks' is sometimes classified as an MMO, and it does have some things in common with games in that genre, but it’s more of a vehicular action multiplayer game. Most of the content is pure deathmatch, as large tank squads try to take down enemy tanks and/or capture their base. Each team has a mix of units - light, medium, and heavy tanks, tank destroyers, and mobile artillery (the proverbial glass cannon). Lighter tanks are quicker, less durable, and excel at spotting enemy tanks for fire support. Heavier tanks and destroyers are slow but powerful, and rely on their smaller cousins to flush out the bad guys. Artillery units are good for hiding and sniping. 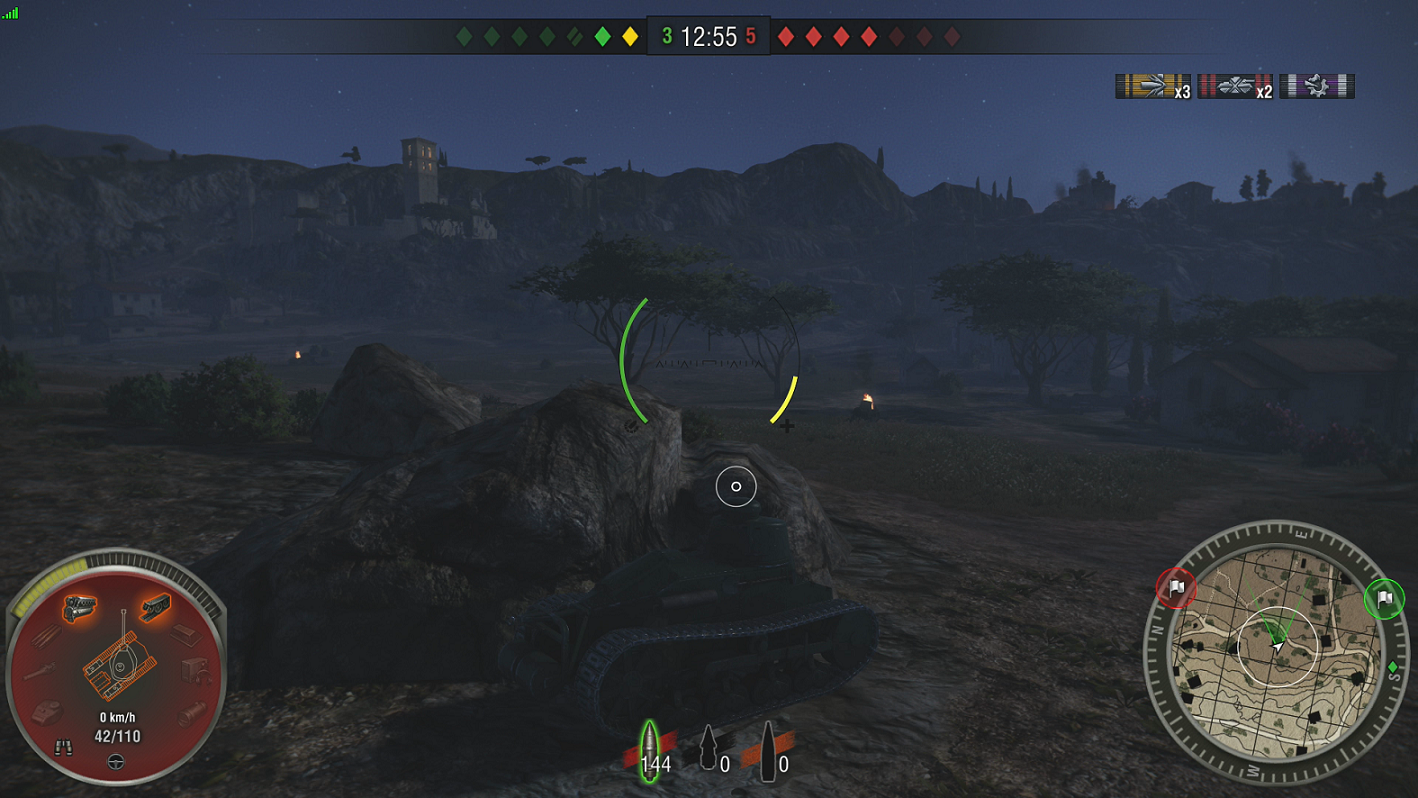 This is a free-to-play game, and one of the biggest goals is unlocking different tanks to use. Finishing a match rewards the player with several types of currency and experience. Rewards can be boosted with a premium subscription, and real money can be used to purchase other features. Even without a premium sub, earning currency isn’t as tedious a grind as in many freemium titles. It wasn’t long before I was cruising around in heavier tanks, although the light tank role is very fun and always in high demand.

Wargaming has meticulously reproduced nearly 400 tanks to date. Many of them have seen service in real life, and they span the time period from World War I to the early years of the Cold War. There are also a few concepts and prototypes. They are arranged into national tech trees from several powers of the World War era: the US, UK, China, Russia/Soviets, Japan, France, and Germany. The national lines tend to follow trends in their design - the German panzers have reliable and destructive guns, while Chinese tanks tend to be lighter and more maneuverable. History is taken into account within the tech trees as well - many of the Chinese tanks are not actually Chinese, for instance, because the PLA did not begin commissioning indigenous designs until almost the 1960s. Some of the French tanks use a drum feed mechanism for loading, which is dangerous to opponents who are unfamiliar with their operation.

'World of Tanks' is engaging both during and between matches. It calls for a different style of fighting, slower and more deliberate. This is not a 'Call of Duty' or 'Titanfall' where the action is frenetic, almost manic in intensity. Running and gunning in your tank will get you blown up in short order. Instead, successful teams are the ones that carefully conceal their heavier tanks and artillery support until the lighter units have scouted the map and discovered enemy positions. Clever uses of camouflage and cover can vastly improve a player’s life expectancy. I played mostly as light tanks, and often hid in bushes or behind buildings and watched while scary heavy tanks rolled by, completely oblivious.

In between matches I spent a great deal of time ogling the many tanks I couldn’t afford and planned out how I would equip them. Experience is used to research new kits and tanks before they can be purchased with silver. Kits have different effects on a tank’s performance, often sacrificing one attribute for another. There are other factors to consider as well, such as one-time booster items and how educated my crew would become (not very, as it turns out - schooling is expensive). Once a tank’s level is maxed out, surplus experience goes into a slush fund where it can then be applied to any tank. The biggest drawback by far is the tutorial, which is short and doesn’t go into nearly enough detail about how tanks actually operate. 'World of Tanks' isn’t strictly a simulator, but the high dose of realism means that those who research individual tank models are going to have a serious advantage over more casual opponents. 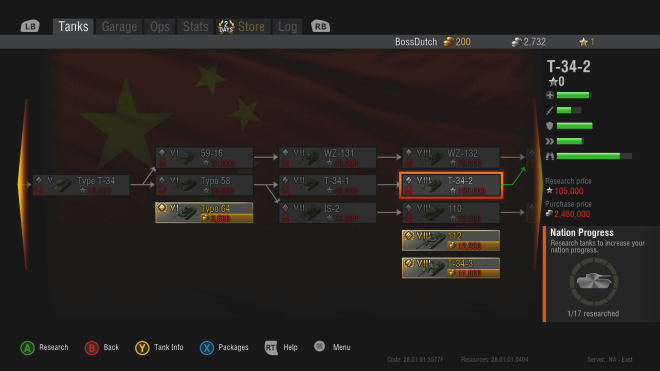 Visual quality in 'World of Tanks' is middling to modestly above average. While a great deal of time has been spent on the tank figures, the environmental textures and effects are less impressive. I saw very few visual artifacts or other technical problems. 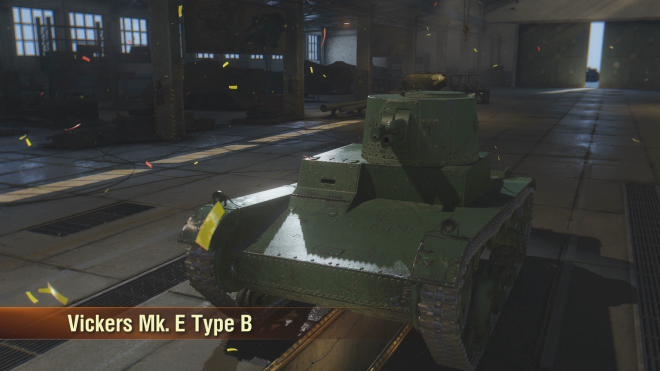 As befitting a game heavily based on World War era tanks, the soundtrack has lots of nationalist, epic-sounding tracks evocative of anthems and military cadence. Sound effects are equally suitable - the endless cycling of the tank treads can be heard underneath everything, and loud booms punctuate each cannon blast.

The large roster of vehicles, kits, crew, nations, and game modes is sure to please any tank enthusiast. Most matches have no respawns, and players can leave to the menu as soon as they are destroyed (although that particular tank will not be usable again until the match is complete). Despite the slower pace of gameplay, most matches are quick, ending in less than five minutes. 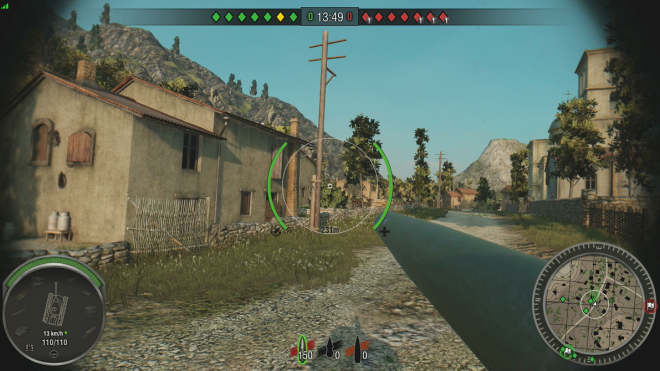 'World of Tanks' is not the typical PvP game, and I can understand why that may turn off some gamers. It’s slower and requires some dedication to learning about tank operation to be enjoyed properly. However, for those interested in more strategic shooting, it is a great experience. The Xbox One version has fermented well.