The Game Itself
4 Stars
The Video: Sizing Up the Picture
3.5 Stars
The Audio: Rating the Sound
5 Stars
Replay Factor
2.5 Stars
Bottom Line
Recommended

Beatbuddy: Tale of the Guardians

From developer Threaks, comes 'Beatbuddy: Tale of the Guardians,' a side-scrolling action game that mixes a free-move water environment with soundtrack keyed-gameplay.  The game was released on PC two years ago, and has been on iOS since last year.

'Beatbuddy' is a mix of platformer and rhythm game. The Beatbuddy himself is a little blue blob who lives in a funky underwater world with his sisters Harmony and Melody. When an evil princely maestro begins to subvert the world’s endemic music for his own nefarious purposes, the Beatbuddy family is awoken from a long nap to save the day. The entire marine ecosystem is made up of music given aquatic form: bouncy anemones are bass drums, spiny hermit crabs are the snare, giant leeches are interactive synthesizers, and so on. The music never stops, and all of the creatures dance and pulsate along with it.

Each of the six levels has its own distinctive track that plays on an endless loop, as most of the sections aren’t timed. The beat sped up, dropped out, or distorted as I scooted around Symphonia’s coral labyrinths. The creatures have an infectious jazz riff, which is effortlessly layered on top of the eclectic soundtrack to make a smile-inducing, head-bobbing melody that Beatbuddy grooves along with past spikes, jellyfish, and other antagonists. 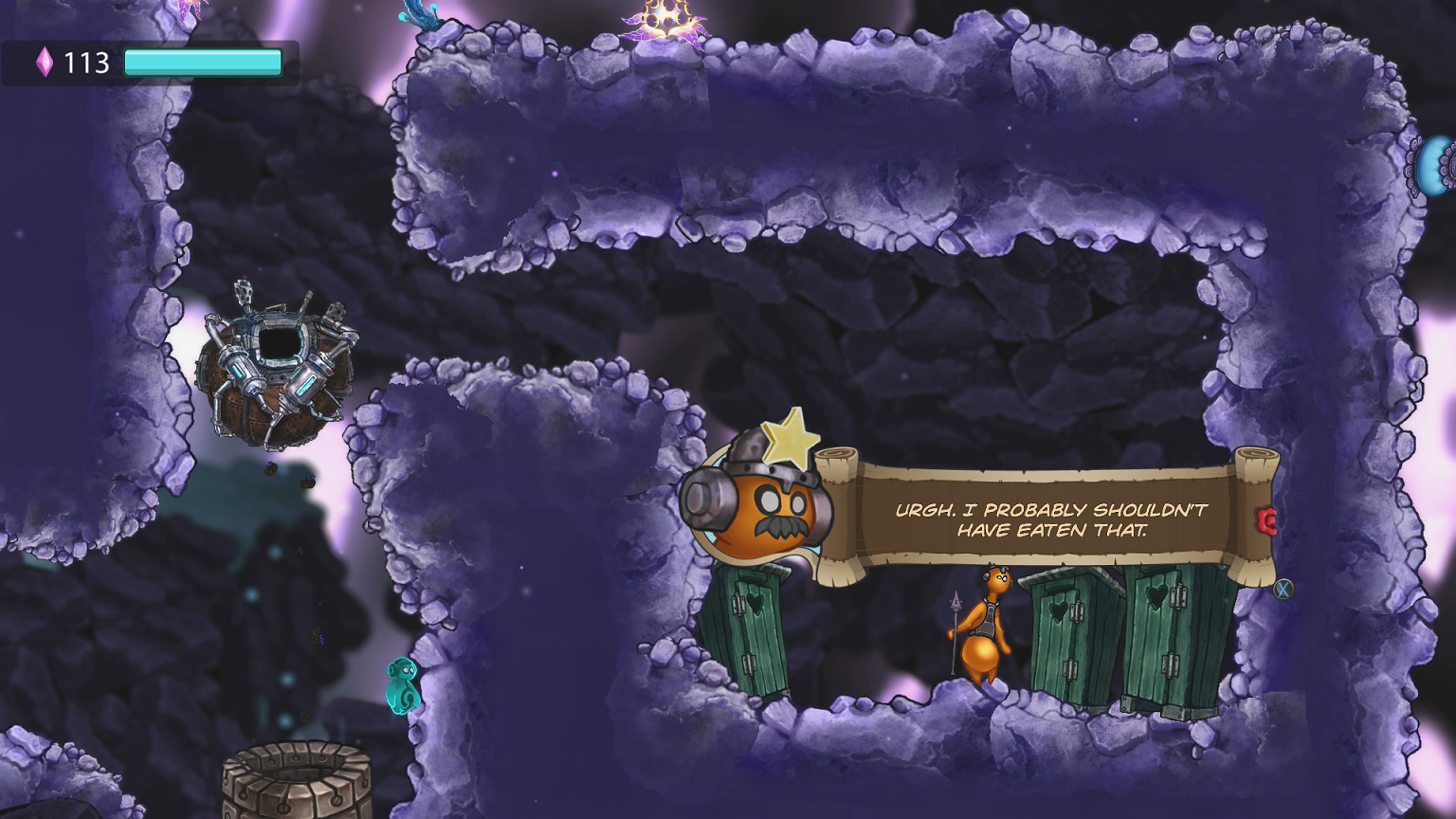 When not dashing through snarestreams or fighting against the current to reach collectibles, I was tasked with some mild puzzle-solving. Beatbuddy frequently launches himself off the bass drum anemones at high speeds, Sonic style, to destroy conch walls and access new areas. Some of these walls can only be passed after rotating a series of bouncy pads to make a long, unbroken chain. None of the puzzles are particularly hard, and though the game is low-pressure, the beat and flow of the game have a tendency to push the player along the proper path, with a few culverts along the way to find collectibles. Some chapters have a beatmobile that gets a boost when a button is pressed along with the downbeat, making me look even more ridiculous as I sway and bob along with the irresistible music from the couch. The game has a chill vibe but some sequences are essentially timed, such as an early level where a giant creature pursues the beatmobile. 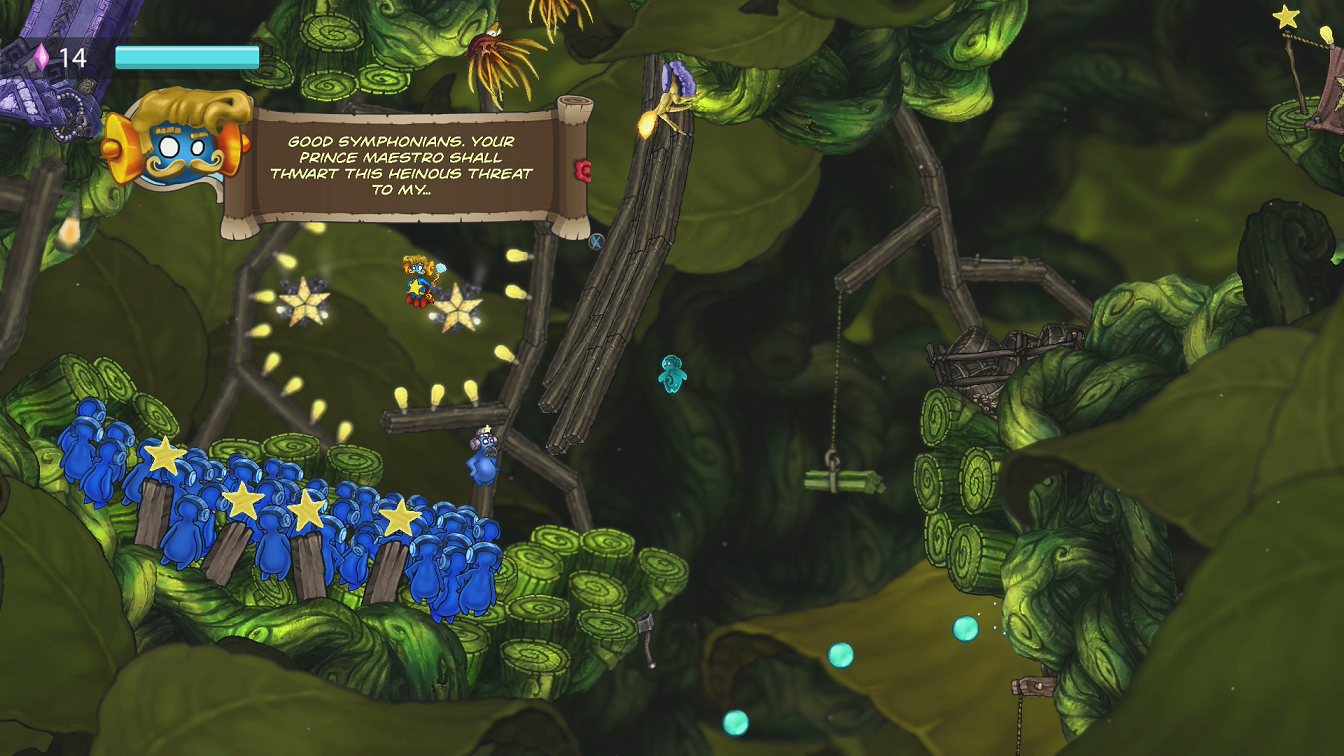 The writing of 'Beatbuddy', like that of many indie platformers, is humorous and cheeky. A clumsy creature joins Beat for several levels, and he speaks with a caricatured German accent and spends much of his time alternatingly breaking the beatmobile and hitting on Beat’s sisters. A pair of plankton cops provide comic relief when they try to arrest mute sea cucumbers for trespassing, and so on. The cutesy sense of humor jives just right with the art style and overall light theme of the game. 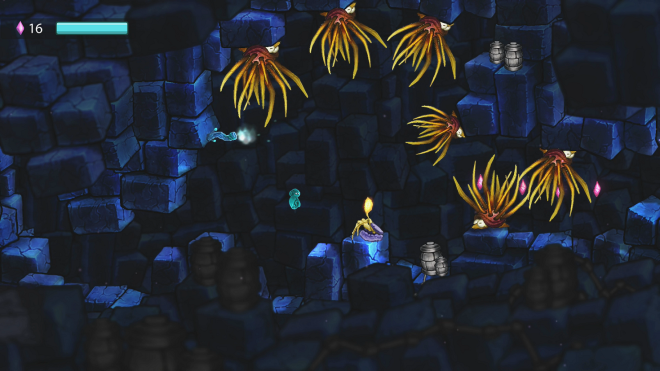 The art design is colorful, bright, and aquatic. The 2D seascape in the background has a classic hand-drawn look, while Beat and the other characters have a more modern, cel-shaded, cut-out feel. The video keeps up well with the audio, although there are occasionally framerate issues. The controls feel just fine after being adapted from point-and-click and touchpad schemes for the PC and iOS, respectively. The main visual issue is that draw-in tends to slow down after a restart, but the problem corrects itself after a few seconds. 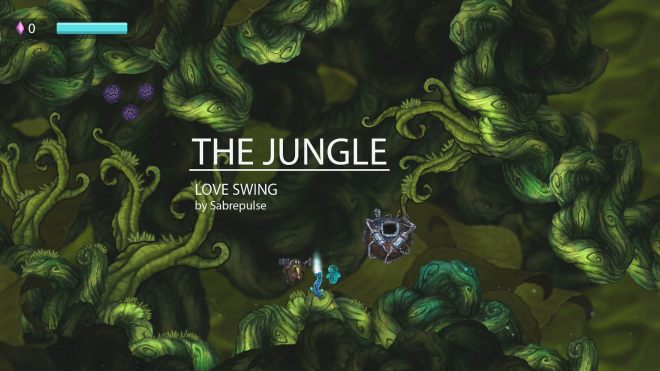 Contributors to the soundtrack include electroswing icon Parov Stelar, chiptune pioneer Sabrepulse, and 'Journey' composer Austin Wintory, the first person to be nominated for a Grammy for a video game. Other tracks range from pure electronica to synth and new wave. The music has been integrated flawlessly into the game, and even when it's altered with percussion and horns via gameplay, still sounds amazing.

'Beatbuddy' is very short, with just six levels that can each be completed in under an hour (there is an achievement for a 3-hour speedrun that doesn’t seem terribly difficult). Most of the levels are linear, although exploration is often rewarded with floating pink plumb bobs that can be cashed in for extras from the menu, such as a scrapbook of Threaks’ history and creative process. 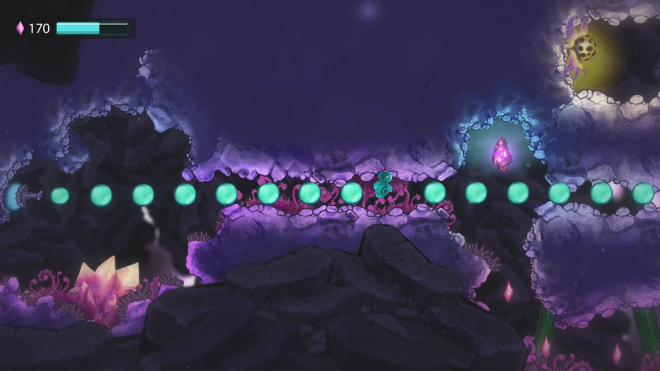 Like 'Chime' and 'Patapon', 'Beatbuddy: Tale of the Guardians' manages to establish a great rhythm game that still maintains engaging elements of other genres and refuses to be pigeonholed. The soundtrack is superb, the art and humor are endearing and welcoming, and the gameplay is familiar and fast-paced, though the experience as a whole is rather abbreviated. I’m glad that these little gems are making their way onto the Xbox One from other platforms, even if they are a few years old - better late than never.