The Game Itself
3.5 Stars
The Video: Sizing Up the Picture
2 Stars
The Audio: Rating the Sound
3 Stars
Replay Factor
1 Stars
Bottom Line
Worth a Look

'Submerged' was developed by Uppercut Games, a small group of former AAA developers who, like many others in this day and age, want to work on smaller, more personal games.

The story of 'Submerged' takes place in a flooded city after an unknown cataclysm wiped out most human life. The player character is a tween girl whose only possession is a small motorboat, and who is accompanied by her seriously injured brother. They are new to the city, and the girl’s first act is to set her brother down in a clocktower while she heads into the city to find food, water, and medicine for them. Almost nothing is explained at the beginning of the game - as the girl explores the exposed tops of skyscrapers, hospitals, and hotels, she collects simplistic pictographs in her notebook that paint a picture of her history and that of the dead civilization.

'Submerged' has no timers, no health bars, no weapons, amd no game overs. The girl can do two things - she can pilot the boat, and she can climb. There is no way for her to die or fail at either activity. As she putters around the watery metropolitan grave, she can use a spyglass to scan the horizon for supplies, collectibles, and upgrades for the boat. While all of the humans are gone, life still exists. An assortment of birds, dolphins, manta rays, and whales can be spotted frequently in the water, and though they cannot damage the boat, their presence is still unnerving, especially because they are infected with some kind of skin disease. The same is true of the greenish crusted humanoids that observe the girl from a distance - they never speak or interfere with her gathering, but they are never far away. Like the Slender Man, they seem to appear and disappear from thin air, and their motives and intelligence are unknown. 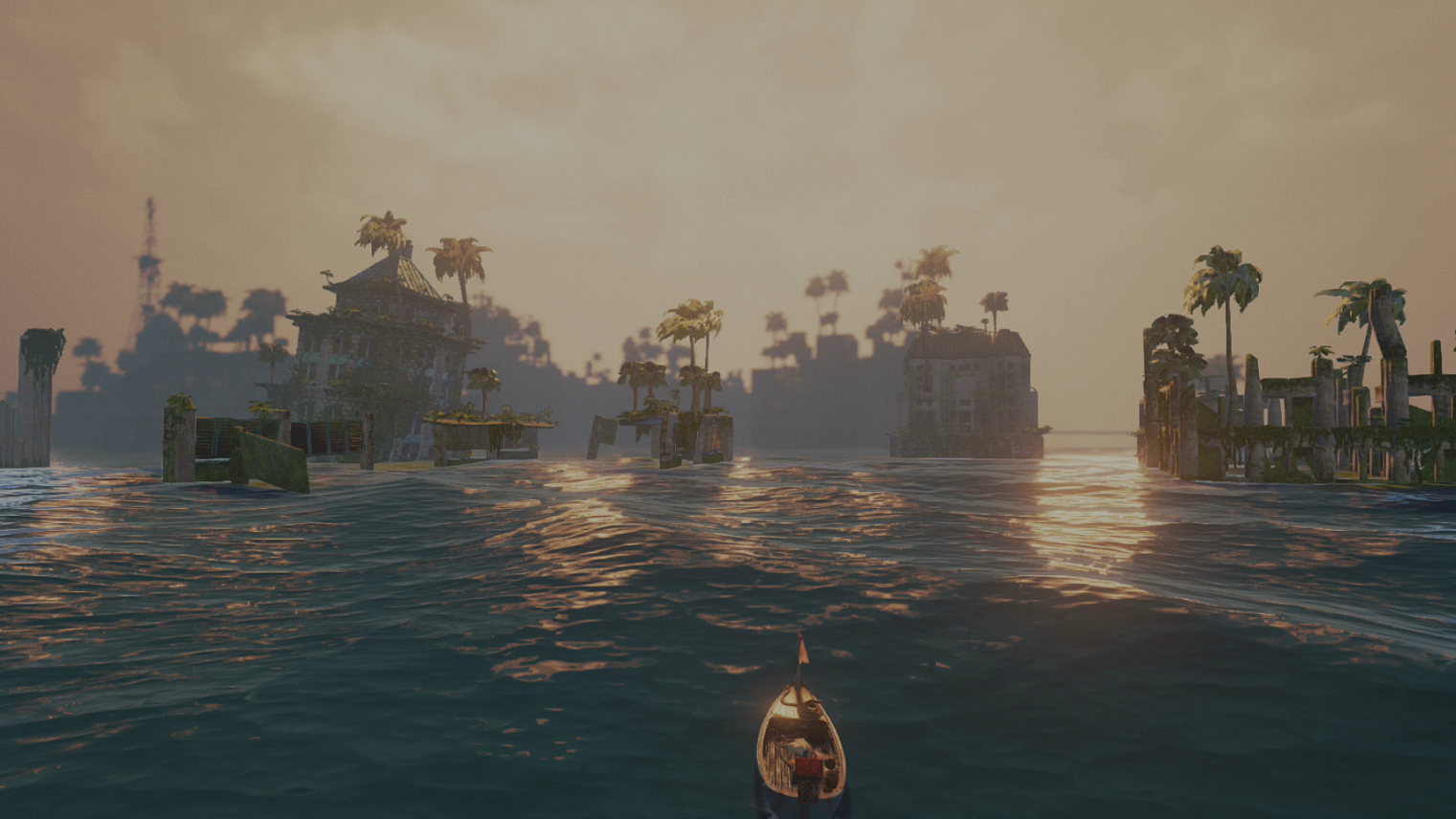 This is an open world title and all of the action takes place on one largish map. The story, such as it is, is furthered by collecting ten packs of supplies scattered around the tops of the largest buildings. Reaching a supply cache sends the girl back to her brother at the clocktower, where she briefly tends to him, takes a nap, and then gets back out into the water. Each building is a platforming minigame that the girl can plumb for secrets and clues on her way to the top. The climbing isn’t particularly difficult; the only challenge is that the left thumbstick has a tendency to register false positives, sending the girl up or down levels when I want her to move laterally. Use of the d-pad fixes this issue. 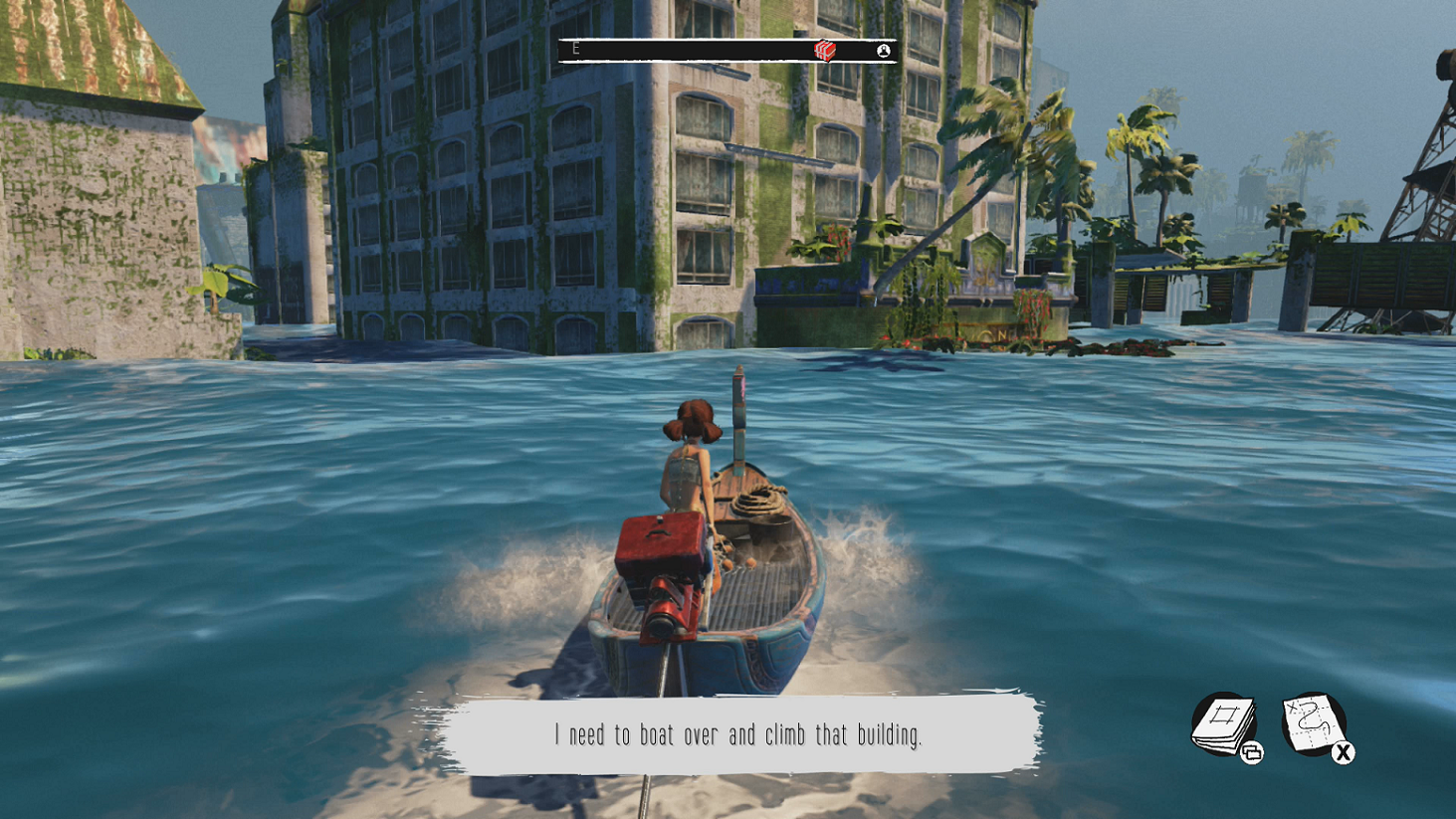 'Submerged' had me conflicted. On the one hand it is often poignant, as the girl is motivated solely by concern for her brother and is fearless in moving about this alien landscape to find what he needs. It has a serene beauty and persistently prods my desire to collect all of the things, no matter how many ledges I have to climb up and down. On the other hand, it is super short, gets kind of repetitive, and has some serious technical issues, detailed below. 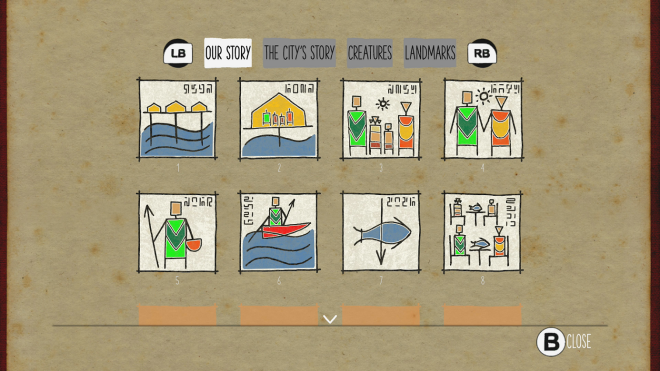 'Submerged' is sometimes beautiful, what with its glowing nighttime algae, frequent thunderstorms, and colorful fauna. It is also sometimes unplayable, as the framerate plummets into the single digits whenever something remotely exciting happens, like a whale breaching near the boat. It has some nice effects with regards to water and lighting, but some of the textures are very aged. Neither of the humans depicted in the game have particularly advanced models or facial expressions. 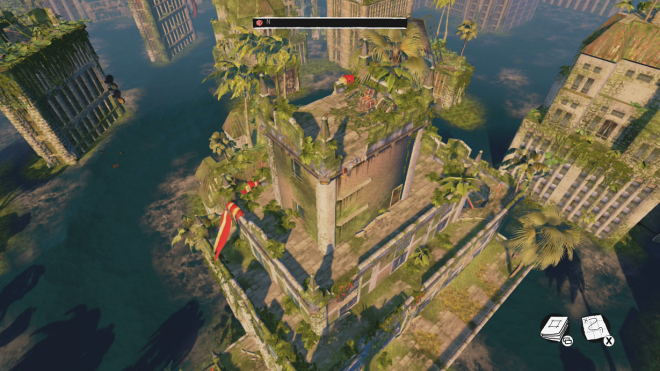 The soundtrack is, like the game, exceedingly short. It consists mostly of breezy piano and some light percussion. I heard it loop quite a few times but didn’t really get tired of it, but nor is it very moving. The sound effects on the other hand are much better. The motion of the water, cries of the surfacing cetaceans, and tappy tap of the boat hull against nearby surfaces constantly reminded me that I was basically in an ocean, full of tiny little manmade islands. There is very little voice acting - the girl sometimes says what she needs to collect next, but it’s in a strange language.

This is an openworld game but it is still pretty linear. The ten "missions" can be completed in any order, and the order does not change the exposition or offer new events. There are quite a few secrets placed in the nooks and crannies of the buildings. They offer subjective displays of the city’s history (is that pictograph of a squiggly line supposed to be a lightning bolt or some kind of bomb?), but even if you go through the trouble of collecting them all and netting all of the achievements, you won’t be playing 'Submerged' for more than a handful of hours. 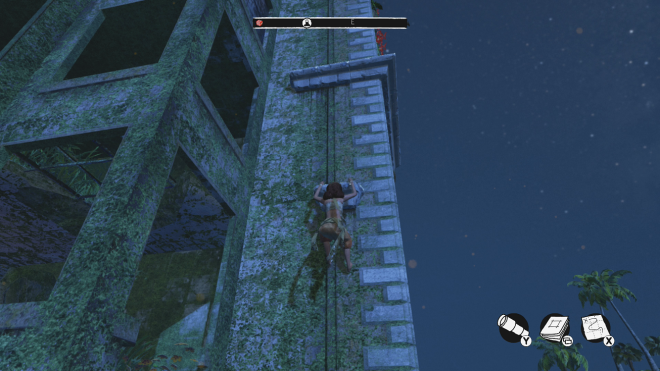 'Submerged' is a special kind of game. I won’t go so far as to say that it is fun for all of its tiny runtime, nor will I say that it’s a half-baked mess of pretentious ideas. I did like that it offers a break from the zeitgeist of contemporary gaming in which bombastic, explosive shooters, faux-edgy action titles, and painfully difficult roguelikes seem to be all the rage. It’s not for everyone, but go in with an open mind and you may find something interesting underneath the surface.